July 24 2017
32
According to the blog BMPD, 22 July 2017 from St. Petersburg to the sea for the first time went to the factory trials completed by construction at Admiralty Shipyards JSC (part of United Shipbuilding Corporation JSC) for the Russian Navy, the lead diesel-electric icebreaker supporting the 21180 project Ilya Muromets ". 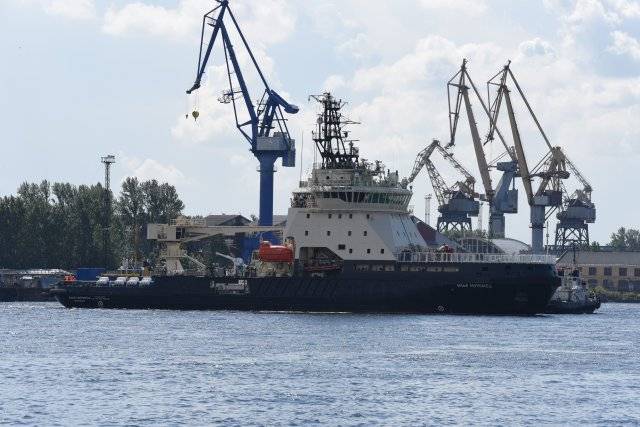 The icebreaker Ilya Muromets was the first ship of this class to be built for the Navy in several decades. fleet Russia, and was built in accordance with the Rules of the Russian Maritime Register of Shipping for the class KM Icebreaker 2014 [6] AUTI ICSFF1WS EPP HELIDEC Speciale purpose ship. The icebreaker will become part of the Northern Fleet and will be used to support the activities of the Arctic grouping of the Navy.

Earlier it was reported that the entire Russian Navy plans to build four icebreakers of this project. However, in April 2017 of the year, information appeared that the Ministry of Defense of Russia for financial reasons decided to abandon the construction of the 21180 series, and intends to issue the Shipbuilding Company Almaz JSC a state contract for the construction of a small icebreaker of the modified 2017M project by the end of 21180. displacement 4 thousand tons and cost about 6 billion rubles, which should be a reduced and cheaper version of the icebreaker "Ilya Muromets."

Ctrl Enter
Noticed oshЫbku Highlight text and press. Ctrl + Enter
We are
The action “Military service under the contract is your choice!” In Rostov-on-Don: future contract servicemen, exhibitions and “Russian Knights”Laid the keel of the first Soviet-era icebreaker with a capacity of 25 megawatts
Military Reviewin Yandex News
Military Reviewin Google News
32 comments
Information
Dear reader, to leave comments on the publication, you must to register.