July 24 2017
45
There is a widespread view that women allegedly did not fight in Nazi Germany. Their main function, according to Hitler, was housekeeping and family (the notorious Die Kinder, Die Küche, Die Kirche - children, kitchen, church). But the Second World War made its own adjustments to this German concept. After the capture of most of Europe, it became obvious that additional personnel in the form of female support units are simply necessary. In total, during the Second World War, about 500 of thousands of German women worked in various support services in Germany.

Women in such units had their own ranks. They worked mainly in various offices, served as telephonists and telegraph operators at communications centers, served as observers in the German air defense system. In the structure of the SS, women in the auxiliary service also served as warders in various concentration camps. There were women in the Luftwaffe - pilots of light transport, passenger and mail planes. They were also included in the female support service. After 1943, in the Third Reich, it was possible to meet the female employees of the Auxiliary Service who worked as truck drivers. 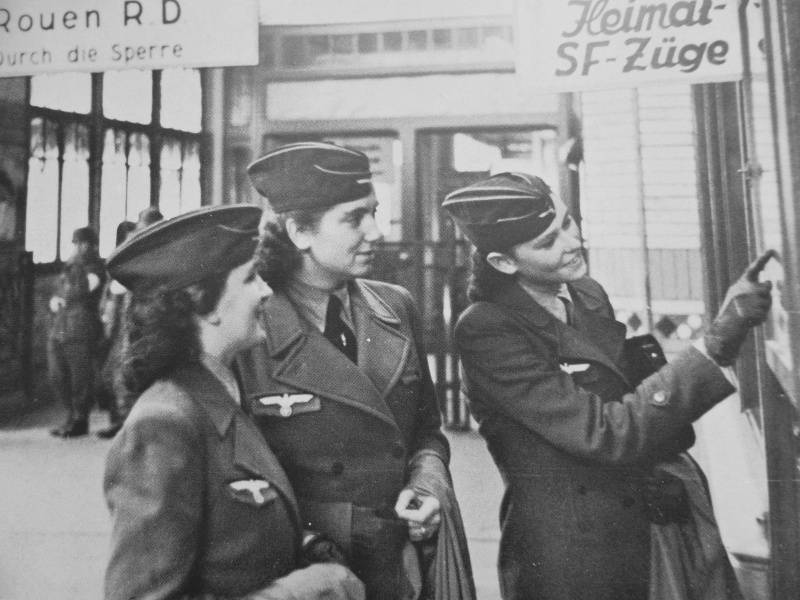 Very often, for their extremely unassuming form, women from various support services were called "gray mice." It should not be assumed that the presence of a uniform automatically equated them with military officials or military personnel. At that time in Germany, all citizens who were in public service or were part of numerous public organizations wore uniforms and certain insignia, including even postmen, miners, tram drivers and employees of the Red Cross.

The first still 1 of October 1940 of the year on the basis of the order number 1085 for the ground forces was formed by the auxiliary communication service of the ground forces (Nachrichtenhelferinnen des Heeres). For all time rather short stories of its existence, it was recruited from among the women who were members of various women's organizations in Germany (for example, the Red Cross), as well as volunteers and, at the very end, from those who went to the conscription service.

Auxiliary service of medical and consumer services (Betreuungshelferinnen). Initially, all questions relating to the life of German soldiers, were in charge of the German Red Cross (Deutsches Rotes Kreuz, DRK). But, starting in October 1941, all the personnel who worked in this direction were transferred to the auxiliary medical and consumer services, the control over this service was directly carried out by the Wehrmacht. 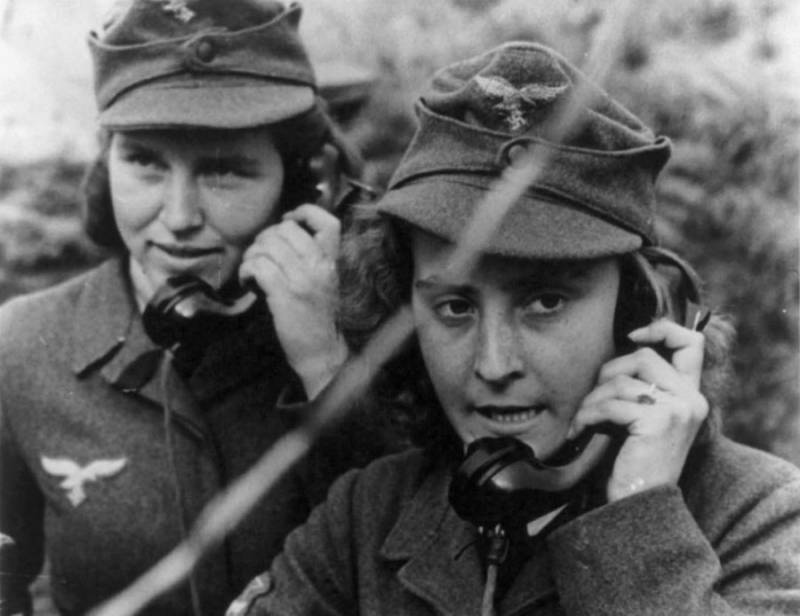 Rider (Bereiterinnen). Although the cavalry had its own reserve of horses, as well as facilities and personnel for their training, the ground forces of Nazi Germany constantly felt a shortage of qualified specialists for services in which they had to use horses. For the first time, starting from 1943, German women of all ages with the required qualifications began to attract horses at various training schools for riding.

By order of 29 November 1944, all the women's auxiliary units of various services of the German armed forces were united in a single auxiliary service (Wehrmachthelferinnen). For the Third Reich, this was a landmark event that finally recognized women as an integral part of the armed forces and another contribution to the implementation of the concept of "total war." The Hitler regime was actually forced to take this step, since a very large number of men of military age were needed to compensate for the increasing losses on the fronts. After being merged into a single service, employees of various support services continued to wear their own uniforms, but at the same time a single system of insignia and titles was introduced. 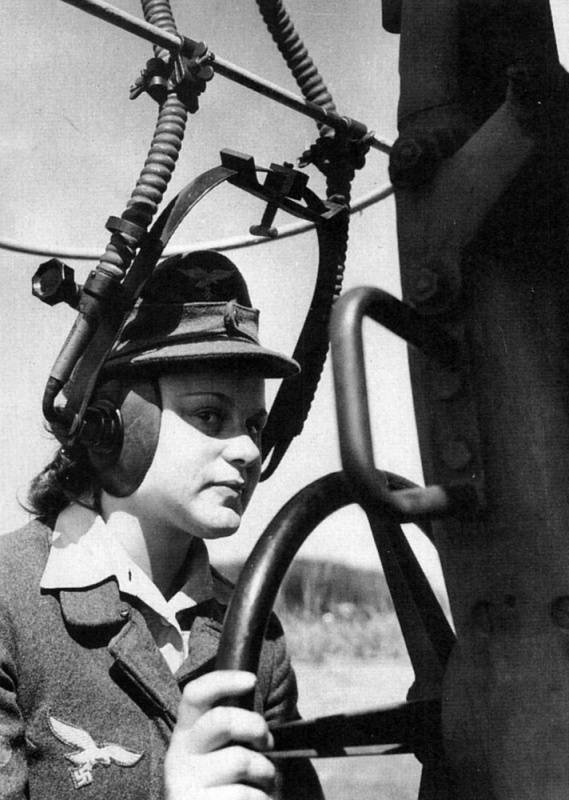 Now women had to observe military discipline and obey all military regulations, while not having the official status of soldiers. The Wehrmacht High Command very clearly adhered to the previously established principle that women should not be used in "combat situations" or in combat. Although in reality from this installation in certain situations could depart. For example, a very large number of German women served in the air defense units of the Reich, to some extent they took part in the hostilities. In addition, some Germans outside Germany served as communications officers of front-line units.

There was an auxiliary aerial surveillance service within the Luftwaffe. The women who served in this auxiliary service were part of the calculations for listening points and transmitting stations, and radar stations. Prior to the appearance of the women's auxiliary communications service of the Luftwaffe in February 1941, which included this unit, it was considered independent. The women of this service also worked as radio operators, telephone operators, communication center workers, cryptographers, teletype operators and telegraph operators. In total, more than 200 thousands of German women were observers of VNOS posts (Airborne Surveillance, Alert and Communication Forces), air defense units and firefighters. Also in the Luftwaffe operated: Auxiliary headquarters service; Auxiliary Alert Service; Auxiliary anti-aircraft service and air raid warning units (since 1944). 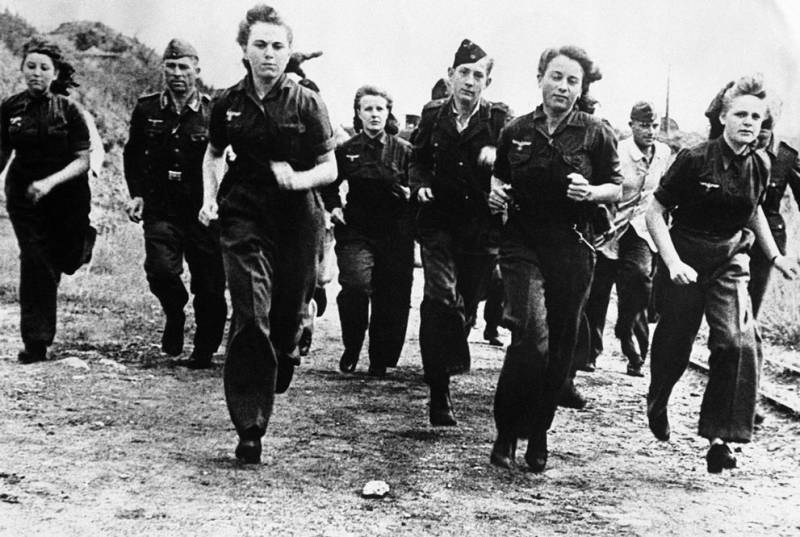 The first truly major appeal of German women for purely military purposes on navy It was initiated on April 10, 1941, with the creation of the Auxiliary Naval Aerial Surveillance Service (Flugmeldehelferinnen der Kriegsmarine). Manning took place by simply transferring women from the air surveillance service (weibliche Flugmeldedientstpersonal) to the navy.

In the middle of 1942, a naval auxiliary service (Marinehelferinnen) was formed as part of Kriegsmarine, also staffed mainly by women. The order for the recruitment of women's auxiliary units for the fleet was issued on July 7 of the year 1942. Both before and after this date, the Germans entered the fleet as signalers from the ground forces. 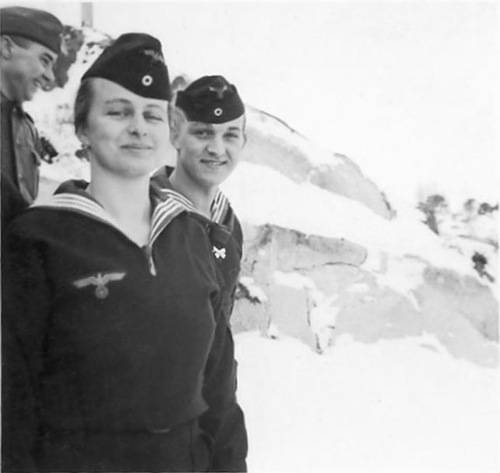 And in the 1943, the German Navy created its own women's anti-aircraft service (Marine Flakhelferinnen). The anti-aircraft fleet support service consisted of German women, who were used mainly in defensive aerostat units, searchlight maintenance units, etc. in close proximity or with their own anti-aircraft calculations. At the same time, women of the auxiliary service were not included in the composition of the gun crews, at least at the initial stage of the service’s existence.

Women who voluntarily entered the auxiliary units of the SS (they were not admitted to the SS) were serving in two main categories: as employees of the S-Helferinnen communication service and as employees of auxiliary units of wartime who performed other duties of the SS-Kriegshelferinnen. Employees of these support services were recruited from among women aged from 17 to 30 years and used to perform the same tasks as their army counterparts. They could work as telecom operators, typesetters, telephone operators, etc. It is known that they were the most thorough recruitment and good training, it is noted that in the support services of the SS there were only 2375 women.

The SS-Gefolge is another name for SS support women in Nazi Germany. Mainly in this category included the wardens of concentration camps. German women could voluntarily join concentration camps. This opportunity was not used by them very actively, although the remuneration was quite good (the salary is 105 Reichsmarks and 35 Reichsmarks for processing). For comparison, in 1938, the average salary of a German worker reached 145 Reichsmarks. 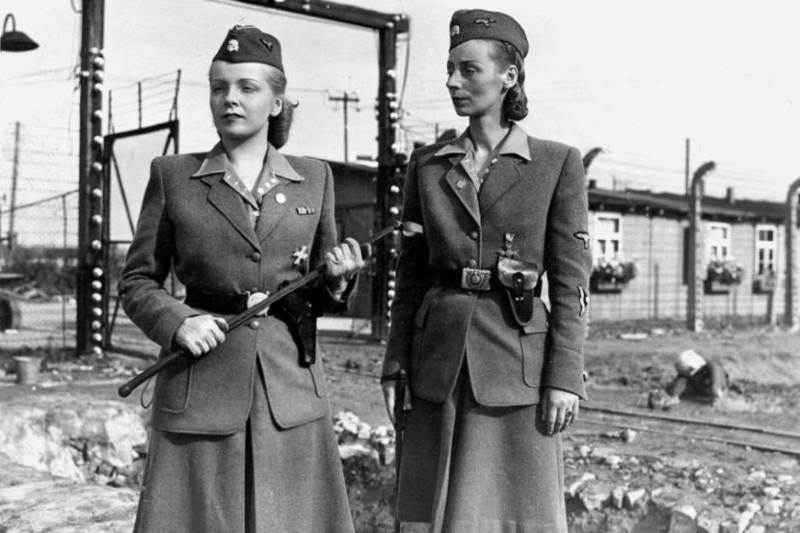 When recruiting female wardens, preference was given to "socially competent", with no administrative or criminal penalties. In addition, they all had to have excellent physical health, political security. Age restrictions - from 21 to 45 years. All candidates were required to submit a biography, photographs, health certificate, an extract from the police, as well as the direction of the responsible employment service. According to available statistics, a total of 1942 to 1945 a year in the Ravensbrück Women's Concentration Camp, thousands of German women underwent publicly funded training as 3,5 warders.

In the most negative light “women became famous” during the years of the Second World War, it was the women who controlled the concentration camps. There were legends about the atrocities of some German warders, and it was them who could be fully called "blond monsters." More than others in this field, perhaps, Irma Greze, who for three years, starting from 1942, was a warder in concentration camps: Ravensbrück, Auschwitz (Birkenau) and Bergen-Belsen, became famous.

Irma Greze was called the “angel of death”, “the fair-haired devil” and “the beautiful monster”. To torture concentration camp prisoners, she used physical and emotional methods of attack, scored women to death, and enjoyed the random shooting of prisoners. She specifically starved her dogs in order to set them on prisoners, and also personally selected hundreds of people to be sent to the gas chambers for certain death. Irma Greze always wore heavy boots, besides the pistol she also had a braided whip. 17 On April 1945, this warder was captured by the British and in November of the same year, along with other employees of the Bergen-Belsen concentration camp, 22-year-old Irma Greze was sentenced to death by hanging. 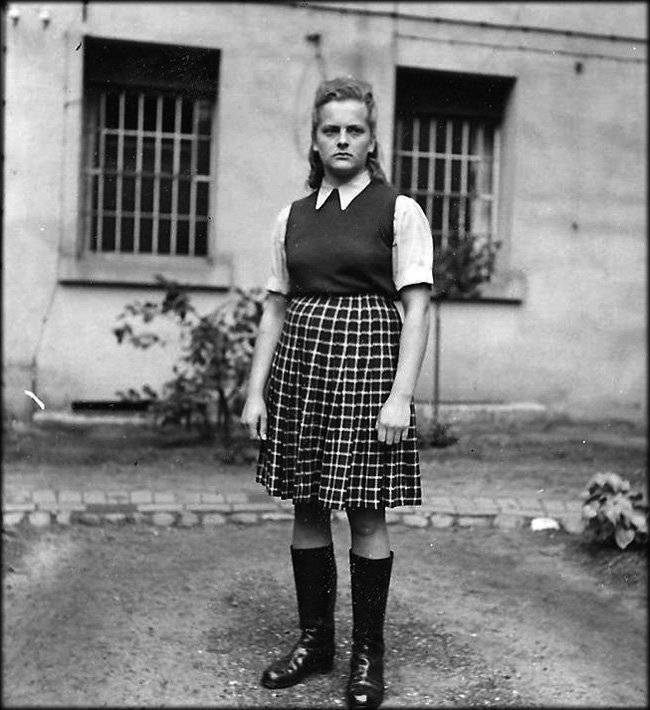 Irma Greze
No less famous than Ilse Grese, was the wife of Karl Koch, who was the commandant of the concentration camps Buchenwald and Majdanek, nicknamed "The Buchenwald Witch" and "Frau Abazhur." She became infamous due to the cruel torture of prisoners of the camps, as well as the fact that she was engaged in the manufacture of souvenirs made from the human skin of dead prisoners (which, however, was not proven in court). According to the prisoners of Buchenwald, Ilse Koch, walking through the camp, beat the prisoners who were encountered with a whip, and also set a shepherd dog at them. She was also accused of ordering the killing of prisoners with tattoos, in order to then make various crafts out of their skin (gloves, book covers, lamp shades). In 1941, Ilsa Koch became the senior overseer among female guards. 30 June 1945, she was arrested by US forces and in 1947, she was sentenced to life imprisonment for her crimes. 1 September 1967 committed suicide by hanging herself in a cell in the Aichach prison in Bavaria.