Counter-battery clash "killers of artillery": Russian "Zoo-1" against shtatovskogo AN / TPQ-47. Is it worth it to be under a delusion? 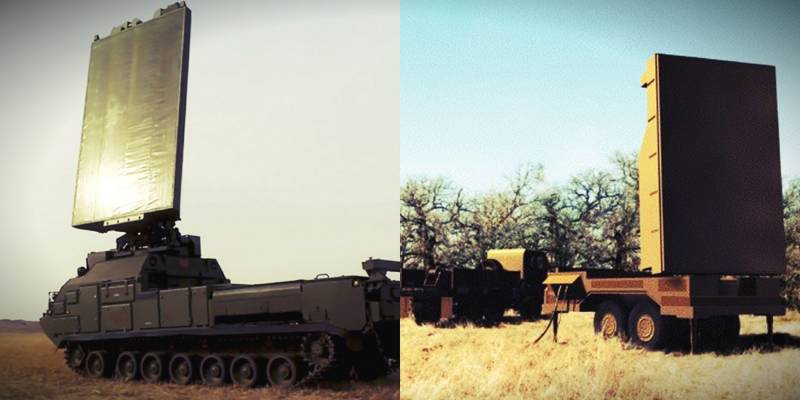 In previous works, we returned several times to a comparative review of various types of domestic radar systems of the Radio-Technical Forces of Russia with their American counterparts. As a result, it turned out that the high technical indicators of our stations, together with their much larger nomenclature, determine a significant separation from state products, which cannot boast of any unique functions. Clearly just the contrast is seen in comparison with the standard surveillance radar decimeter AN range / TPS-75 «Tipsy» c Russian multifunction radar centimeter range 64L6 "Gamma S1" or all-altitude radar detector AN / TPS-59 with domestic interspecific RLC 55ZH6M "sky-M ". If the list of functions of US stations is very limited (air traffic control and targeting for anti-aircraft missile batteries), then our complexes (due to their multi-range) can be hardware and software methods adapted to direct targeting for anti-aircraft missiles during the interception of enemy targets.

Nor can the US Air Force boast of such specialized tools as the high-energy low-altitude detector (NVO) 48YA6-K1 “Podlet-K1” capable of detecting inconspicuous cruise missiles at a distance of 35 km. Nevertheless, radars for work on aerospace space objects - this is not a complete list of radar weapons to counter the threat from the enemy’s offensive-defensive weapons. Today’s counterbattery radar of artillery reconnaissance, designed to reveal enemy firing positions along the flight trajectories of artillery shells, unguided and guided missiles and operational-tactical ballistic missiles, occupy a niche in the list of radar complexes of the new generation. The principles of operation of these stations set rather high demands on the computing facilities of electronic equipment, as well as on the energy capabilities of antenna posts based on PFAR / AFAR. For example, if for confident determination of the position of a 120-mm mine or 122-mm unmanaged projectile outburst, it is sufficient to briefly “enlighten” its trajectory using a beam of the radiation pattern in any sector of the ascending section, then to determine the launch position of an XM30 GUMLRS corrected rocket or shot of the artillery M982 “Excalibur”, it is necessary to “fix” the initial segment of their trajectory, because in 5 and more kilometers they can be redirected to a higher priority target, after which the coordinates a tive artillery battery will be almost impossible.

That is why during the design of counter-battery artillery reconnaissance radars the main focus is on the stability of the so-called “lower beam” mode, when the viewing range in the elevation plane ranges from 0 to 10 degrees. For example: the AN / TPQ-36 and AN / TPQ-37 "Firefinder / II" American counterbattery radar ranges from 0 to 7 / 7,5º, respectively. This is almost 5 times less than that of the national artillery reconnaissance complex 1Л219М Zoo-1. Nevertheless, the choice in favor of the "lower beam" leads to other noticeable shortcomings. In particular, “Firefinders” of AN / TPQ-36 / 37 modifications do not have the ability to detect mines, as well as rocket and artillery shells, ascending or descending branches of the trajectory exceed the above-mentioned viewing sector. Consequently, these radars cannot accurately calculate the points of falling of the shells in a few tens of seconds, which means that there is no ability to timely alert friendly units of the impending artillery strike. It is this disadvantage that the AN / TPQ-36 “Firefinder” radar handed over to Ukrainian formations can boast. Time does not stand still, and the development programs of artillery reconnaissance radars continue to improve, adopting all the necessary features of aerospace radars.

The most modern domestic concept of such a radar system is 1L260 Zoo-1M, developed by the Tula scientific and production association Strela, which is part of the Almaz-Antey Air Defense Concern. Back in 2013, information appeared about the beginning of the military test phase of the updated Zoo; in the same year, at the MAKS-2013 aerospace show, a prototype of the complex with the main tactical and technical characteristics was put on public display. The same prototype was also presented at MAKS-2017, which, with reference to the “Herald of Mordovia”, was reported bynews rbase.new-factoria.ru system ("Missile Technology").

The source states that 1L260, presented by AFAR, is capable of detecting: 155-mm projectiles of the SAU M109A6 “Paladin” at a distance of 23 Kz.Ye. IIA ”- 26 km. It also indicates that the angle scan zone is 2 - 30º. This suggests that the computational terminal of the Zoo-45M can easily determine the positions of enemy artillery units along trajectories of unguided projectiles at even longer ranges. To do this, it is enough to track the 164 — 65-kilometer downstream portion of the trajectory. In particular, the coordinates of the battery of "Paladins" firing simple or active-projectile projectiles can be calculated at a distance of the order of 0 - 40 km, the positions of the M1 MLRS launchers can be calculated at a distance of the order of 5 km. It is worth noting that a similar technique would be absolutely useless with respect to managed OTBR and adjustable missiles, since the initial and middle sections of the trajectory (located outside the energy potential of the Zoo) can vary considerably depending on the flight algorithm loaded by the INS of the projectile.

As you can see, thanks to the large-scale scanning sector, the counter-battery 1L260 “Zoo-1М” radar noticeably outperformed the staff AN / TPQ-36 and AN / TPQ-37. Apart from the fact that the station is capable of calculating the enemy’s firing positions, shells falling places, as well as adjusting the fire of friendly counter-battery weapons, the list of its tasks now also includes an overview of the airspace for threatening elements of high-precision weapons. According to the developers and specialists, the Zoo-1М is capable of issuing target designation to the operator terminals of short-range anti-aircraft missile systems (obviously, this refers to Pantsir-S1, Tor-M1 / 2) in the network-centric system of a modern military anti-aircraft defense. It is quite logical that such a link would require the use of an intermediate link - a unified battery command center of the 9 – 737 “Ranzhyr” type with some hardware “bells and whistles”, but this is still silent. Considering that the Zoo 1M station is capable of “tying up tracks” of such small-sized objects as 82-mm mines, the calculated minimum EPR may be at the level of 0,008 - 0,01 м2: small-sized UAVs and tactical missiles with radio-absorbing and composite materials. 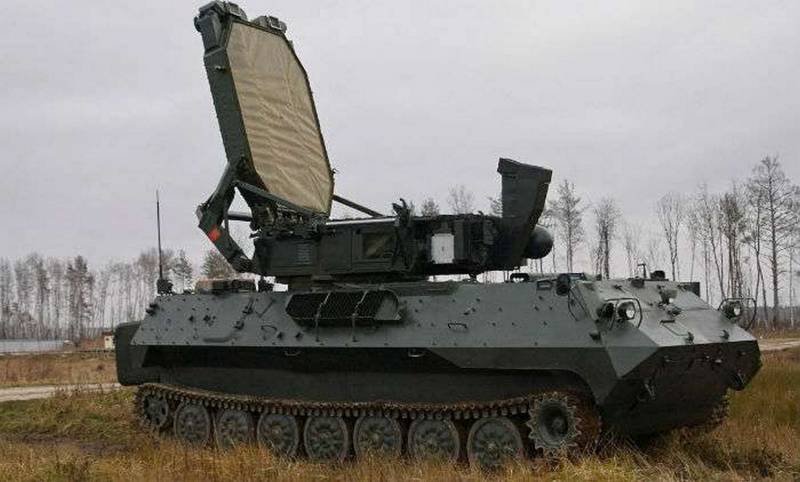 The throughput of the counter-battery radar 1Л260 reaches approximately 12 simultaneously accompanied by the passage of targets, while a minute can be "held" to 70 - 75 artillery and rocket projectiles. It takes about 15 - 17 to determine the trajectory, as well as the coordinates of the launch and fall of the shells The element base (including computational) of the counter-battery 1L260 “Zoo-1M” radar has a great similarity to the “stuffing” of the previous 1L219М “Zoo-1” modification. It was built around the modern digital computer of the Baguette family. The main difference is in the use of a completely new active phased array antenna 1ЛХNUMX, the total power of the receiving and transmitting modules of which reaches 261 kW (70-219-1-ZOOXXXXXXXXXXXXX3-X-NUMX-X-NUMX-1-259-30-70-80-XNUMX-XNUMX-XNUMX-XNUMX-XNUMX) Due to this, XNUMX is observed - XNUMX% increase in the effective range. Moreover, in comparison with the first “Zoo”, the new version has ten times greater vitality and service life: the failure of several dozens of anti-personnel landmines will only slightly affect the performance of the main task list.

The only parameter by which the American counter battery radar AN / TPQ-37 is slightly ahead of 1Л260 Zoo-1М is the effective detection range. The US product is capable of detecting 152-mm artillery shells at a distance of 30 km, while unguided missiles are trapped in 50 km, which is 1,3 times more than the updated Zoo. Nevertheless, this is only a drop in the sea against the background of the error in determining the coordinates of the barrel artillery of AN / TPQ-36 / 37, which varies in the range of 60 - 80 m. At the "Almaz" counter-battery, this parameter does not exceed 40 m!

Meanwhile, it’s not worthwhile to delude yourself in connection with the superiority of the Zoo 1M over the above counter battery artillery reconnaissance radars, since the American companies Raytheon and Northrop Grumman have two spare counter battery / multifunction radars, whose capabilities are not only inferior , but also partially ahead of all known modifications of the Zoo. The first project is a high-potential AN / TPQ-47 RLC (or AN / TPQ-37 P3I Block II). The use of a decimeter S-band does not ensure the radar of the increase in resolution and accuracy of determining the trajectory of the projectiles, but it allows to realize a greater range in 1,5 - 2. In particular, AN / TPQ-47 is able to detect: 82-mm mines at a distance of 20 km, 120-mm mines at a distance of 30 km, 152-mm artillery shells at a distance of 60 km, unguided and guided missiles - 80 - 100 km. These indicators are among the best in the world. Tactical ballistic missiles on the ascending branch of the AN / TPQ-47 trajectory can “see” at a distance of 300 km! This radar is also designed to detect various types of airborne objects, including aircraft using stealth technology, which makes it possible to integrate into air defense / missile defense systems. 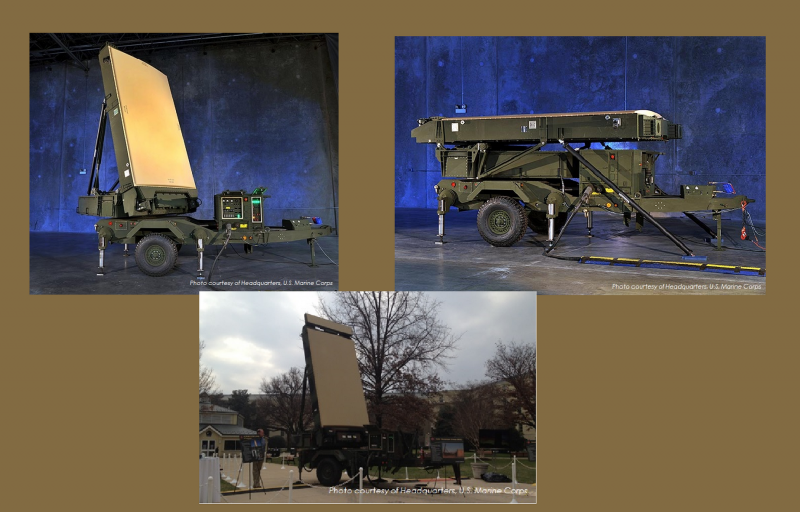 The AN / TPS-80 G / ATOR multi-function radar will become the information base of the US Marine Corps in both counter battery and anti-aircraft / anti-missile missions.

Domestic radar artillery combat L-260 "Zoo 1M" gives an opportunity to show the potential of a SAU "MSTA-S", "Coalition-SV" with a range of 40 shooting - 70 km and multiple launch rocket systems 9K58 "Smerch", applying reactive shells with a range of up to 70 km (9М55К1 with self-guided 9H142 "Motive-3М" or high-explosive fragmentation 9М). Energy and long-range capabilities for the independent issuance of target designation to operational-tactical complexes "Tochka-U" or "Iskander-M" at a distance of 55 - 150 km from "Zoo-300M", unfortunately, no. At the same time, the American Nortrop Grumman already has a production line almost completely ready for serial production of even more multifunctional radars with counter-battery and anti-air capabilities like AN / TPS-1 G / ATOR (Ground / Air Task Oriented Radar). Their last modifications will receive more energy-efficient and wear-resistant transceiver modules based on gallium nitride, which will increase the range of work by about 80 times. The AN / TPS-1,3 multifunctional AN / TPS-2 operating on the 4-80 GHz frequencies can track both artillery shells (determining the coordinates of the enemy’s firing positions and projectile impact points) and accompany air targets at distances up to 250 - 300 km.

In terms of the effectiveness of airborne visibility and target designation, this radar corresponds to products such as the Opponent-G radar detector or the BBO 96L6 all-altitude detector, while the counter-battery capabilities are ahead of our Zoo-1M. One can only hope that our defense industry will soon have a decent response in the form of a multifunctional dual-use radar system with an increased working resource due to the introduction of AFAR technology with LTCC substrate. Indeed, only this technology is capable of putting a fat point in the “interspecific radar race” between Russia and the United States.