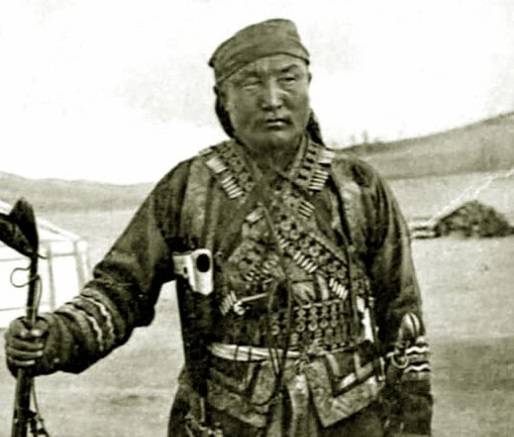 In St. Petersburg Kunstkamera for more than 90 years stored a terrible exhibit. He has never been put on public display and is unlikely to ever be exposed. In the inventory, it is listed as the "Mongolian head." But the museum staff knows much more and if they wish, they will tell you that this is the head of Ja-Lama, who was considered a living god in Mongolia in the early 20th century.

The great Manchurian Qing dynasty, which ruled China since 1911, reeled in 1644. In the south of the province, one after another, they announced their withdrawal from the Qing Empire and passed into the camp of supporters of the republican form of government. In the blood of the civil war, the future PRC was born.

But the north was not a monolith. 1 December 1911, the Mongols announced the creation of their independent state. The head of the Mongolian Buddhists, the Bogd Gegen, became the Great Khan. Crowds of nomads surrounded the capital of the Khovd province and demanded that the Chinese governor recognize the authority of Bogd Gegen. The governor refused. The siege began. The city stood firmly, all the assault attempts fought back with heavy losses for the attackers.

This continued until August 1912, until Dambidzhaltsan, aka Ja-Lama, whom the Mongols worshiped as a living god, appeared under the walls.

For the first time, a native of the Astrakhan province, Dambidzhaltsan, appeared in Mongolia in the year 1890. 30-year-old Kalmyk presented himself as the grandson of Amursana - the legendary Dzungarian prince, the leader of the liberation movement in Mongolia in the middle of the XVIII century.

The "grandson of Amursan" walked around Mongolia, scolded the Chinese and called for struggle against the conquerors. The Chinese seized the troublemaker and wanted to execute, but to their displeasure it turned out to be a Russian subject. The authorities handed over the arrested Russian consul and asked to be taken back to him and preferably forever. The consul sent the failed leader of the popular uprising on foot to Russia.

In 1910, Dambidzhaltsan reappeared in Mongolia, not as a descendant of Amursan, but as Ja-Lama. Within a few months, he recruited several thousand admirers, started a guerrilla war against the Chinese, and became not just one of the most authoritative field commanders, but an object of faith and worship of thousands and thousands of people. There were legends about his invulnerability, songs about his learning and holiness.

The spectacle was not for the faint of heart. The Chinese opened fire. When the roar of firing began to subside (the defenders began to run out of ammunition) Ja-Lama led his warriors to the assault.

The city was taken and plundered. The descendants of Genghis Khan massacred the entire Chinese population of Khovd. Ja-Lama made a solemn public ceremony of consecration of his battle flag. Five prisoners of the Chinese were slaughtered, Ja-Lama personally pulled out their hearts and drew bloody symbols on them. The grateful Bogda Gegen awarded the conqueror Hovd with the title of Holy Prince and appointed governor of Western Mongolia.

In his inheritance, Jah-Lama began to introduce the rules and customs of the Middle Ages. Over the year, more than 100 noble Mongols were killed, and even simple ones without an account. The Holy Prince personally tortured the captives, cut off the skin from their backs, cut off the unhappy noses and ears, squeezed out his eyes, poured molten tar into the blood-soaked eye sockets of the victims.

The Bogd Gegen did not touch all these atrocities, but Ja-Lama increasingly showed his disobedience to the Great Khan, gradually turning Western Mongolia into a separate state. The Bogd Gegen appealed to the aid of the northern neighbor, Russia.

Russia absolutely did not care what was happening on the other side of its border. Not only is civil war going on in China, the gangster state is also forming and getting stronger right before our eyes. Togo and not looking today or tomorrow will begin the raids of the heirs of the Golden Horde for a tribute.

Therefore, in February, 1914, a hundred Transbaikalian Cossacks, went on an expedition to Western Mongolia and, without losing a single person, brought the invincible Jha-Lama to Tomsk, “killing hordes of enemies with one glance. Mongol god sent into exile under the supervision of the police in his native Astrakhan. On this could end история This adventurer, but the revolution broke out.

In January, 1918, when no one in Astrakhan was concerned with the exiled Kalmyk (street fighting was going on in the city), Dambidzhaltsan collected things and headed east to distant Mongolia. In Mongolia, at that time, complete chaos reigned: dozens of gangs living in robbery and robbery were walking along the steppe. With the arrival of Ja-Lama, they became one more.

Taking into account the experience of 1914, Jah Lama in Dzungaria, with the help of slaves, built the Tenpay-Baishin fortress. The garrison made up the 300 of well-armed warriors. And in each camp, at the call of the holy lama, hundreds of men were ready to stand under his banners. The main source of income for the “state” was the looting of caravans.

At that time, detachments of the Chinese, Baron Ungern, and the red Suhe-Bator, walked around the Mongolian steppes to and fro. Ja-Lama fought with all and did not belong to anyone, seeking to retain the status of a feudal ruler.

In 1921, the government in the country, with the support of Moscow, took the People’s Government of Mongolia. Gradually, it took control of remote areas of the country. In 1922, the turn reached the territory controlled by Jah-Lama. October 7 State Internal Security Service (Mongolian Cheka) received a document that began with the words "top secret". It was an order for the liquidation of Jallama.

At first they wanted to lure him to Urga. A letter was sent to Tenpay-Baishin proposing that Ja-lama accept the post of Minister of Western Mongolia with the granting of unlimited powers over the entire territory under its control. For the solemn ceremony of the transfer of power, the terrible saint was invited to the capital. The cautious Jamala refused to go to Urga, but asked to send plenipotentiaries to him along with all the documents.

A government delegation went to Western Mongolia. Indeed, high-ranking officials were heading it: the head of the Mongolian intelligence service, Baldandorzh, and a prominent warlord, Nanzan. Another member of the delegation was a man in the form of a first-rank official — this was Kalmyk Khartiuk, an adviser to Soviet Russia in the intelligence department. These three and led the operation.

Death of the mongolian god

Ja-Lama agreed to let only a few people into his fortress, and directly meet only two. Send Nanzan-bator and Cyric (soldier) Dugar-Bace. The red ambassadors presented themselves as loyal admirers of Ja-Lama, and on the second day the sovereign of Western Mongolia trusted so much that he let the guards go.

Then Dugar knelt down and asked for a holy blessing. When the lama raised his hand, the cyric gripped his wrists. Behind Ja-lama, Nanzan snatched a revolver and fired a llama in the back of the head. Having jumped out into the street, Urgi's envoys fired shots into the air, gave a signal to their comrades that it was time to proceed to the second part of the operation - to seize the fortress and eliminate the gangster nest.

Tenpay-Baishin was captured in a few minutes and without shots. The death of the living god shocked the soldiers of the garrison so much that they did not offer the slightest resistance. All the inhabitants of the fortress were gathered in the square, several of the closest Jana-lamas were immediately shot. Then they lit a fire on which burned the remains of someone who, as it was believed, ate the leaves of the tree of life that gives immortality in his youth.

The worshipers of the terrible saint were ordered to go home, declaring that their god was a mere mortal, and a bandit. The next day, the detachment left the fortress. At the head, the Cyric rode, with the head of Ja-Lama on his peak.

For a long time they drove their heads all over Mongolia: “Here he is, the formidable Ja-Lama, who was defeated by the people's government!” .

Songs and tales about the exploits of Ja-Lama are still alive in Mongolia. How this is simultaneously combined with the stories about his atrocities we do not understand. East is a delicate matter.

Ctrl Enter
Noticed oshЫbku Highlight text and press. Ctrl + Enter
We are
100 years of the Cheka - "the punishing sword of the revolution"How Mongol-Tatars Rus conquered
68 comments
Information
Dear reader, to leave comments on the publication, you must to register.