July 22 2017
58
At one time, the foreign press more than once reported that the USSR Armed Forces were ready to use nuclear mines to cover the border with China. This, however, is about a long period of very unfriendly relations between Moscow and Beijing.


And then it was like that. In the event of a war between the PRC and its northern neighbor, real hordes would have poured into its territory, consisting of formations of the People's Liberation Army of China and the militia - the minbins. Only the latter, we note, significantly outnumbered all fully mobilized Soviet divisions. That is why at the borders separating the USSR from the Celestial Empire, in addition to the many dug in the ground tanks supposedly it was planned to resort to the installation of nuclear mines. According to the American journalist and former Soviet officer Mark Steinberg, each of them was able to turn a 10-kilometer border zone into a radioactive barrier.

Surprise in the well

It is known that the sappers are engaged in mining and demining, dealing with anti-personnel and anti-tank mines, unexploded bombs, shells and other extremely dangerous gizmos. But few have heard that in the Soviet army there were secret demining units for special purposes, created to eliminate nuclear bombs.

The presence of such units was due to the fact that during the Cold War, American forces in Europe placed nuclear explosive devices in special wells. They were supposed to work after the start of hostilities between NATO and the Warsaw Pact on the path of the Soviet tank armies rushing to the English Channel (the Pentagon had a bad dream at that time!). Approaches to nuclear mines could hide behind conventional minefields.

Meanwhile, civilians in the same West Germany, for example, lived and did not know that there was a well with American atomic ammunition nearby. Similar concrete mines with depths up to 6 meters could be found under bridges, at intersections of roads, directly on motorways and at other strategic points. Usually they were arranged in groups. And the banal type of metal lids made nuclear wells almost indistinguishable from ordinary sewer manholes.

However, there is also an opinion that in reality they did not install any land mines in these structures, they were empty and they should have dropped nuclear warheads only if there was a real threat of military conflict between the West and the East - during the “special period in the administration procedure” according to the terminology adopted by the Soviet army.

Platoons of reconnaissance and destruction of enemy nuclear mines appeared in the staff of engineer-sapper battalions of Soviet tank divisions stationed in the territory of the Warsaw Pact member countries in 1972. The personnel of these units knew the structure of the atomic "hellish machines" and had the necessary equipment for their search and neutralization. The sappers, who are known to make mistakes once, were completely unable to prevent a blunder. 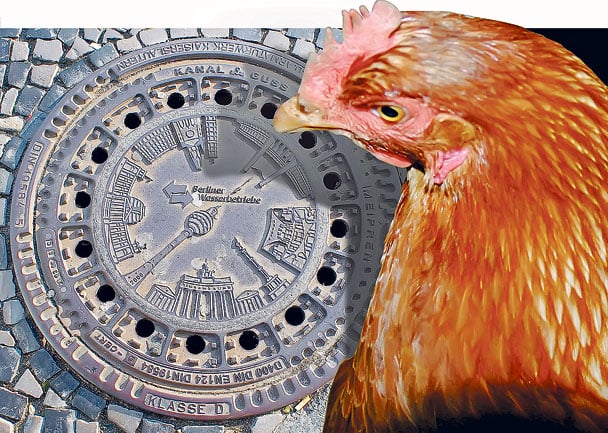 These American land mines included M31, M59, T-4, XM113, M167, M172 and M175 with the trotyl equivalent from 0,5 to 70 kilotons, combined under the general abbreviation ADM - Atomic Demolition Muntion, which has a snooper 16% theme figure. They were quite heavy devices weighing from 159 to 770 kilograms. The first and most difficult of land mines - M59 US Army adopted into service in 1953 year. For the installation of nuclear mine bombs, the United States troops in Europe had special demining units, for example, the 567-I engineering company, whose veterans even acquired a completely nostalgic website on the Internet.

The military of the United Kingdom tried to keep up with the overseas allies, and it wasn’t without uniform curiosity associated with chickens (such is a pun). The nuclear bomb, called the Blue Peacock Blue Peacock, looked like a hefty steel cylinder that held a plutonium charge with a power of 10 kilotons and ordinary explosives. Peacock was created at the end of the 50-ies on the basis of the first British nuclear bomber Blue Danube ("Blue Danube"). The bomb was already weighing more than seven tons, and the generals from foggy Albion decided to bury a dozen of such "birds" near important objects in the FRG and still with the same purpose - to blow them up in the event of a Soviet offensive.

The curiosity was that in order to provide the necessary technical microclimate inside the “Blue Peacocks” in the winter, the English were about to launch chickens with food and water. The developers of Blue Peacock believed that the hens and cocks with their biological warmth would effectively warm the sensitive electronic brains of the nuclear monster to cold. Undermining such a device could be carried out on a five-kilometer wire or using a timer with an urgency of up to eight days - about as much chicken food was calculated, as well as the composition of the air environment, so that birds would not suffocate in their own amber.

However, the deployment of underground atomic chicken hen did not happen. In 1958, the British Minister of Defense canceled the Blue Peacock program, believing that the safety of such a mine was insufficient and threatened serious political complications in the event of radiation incidents in the territory of a NATO ally. And in the 80-s were removed from service and exported from Europe and much more sophisticated American nuclear bombs.

In the arsenal of the likely adversary, there were other exotic nuclear weapons. "Green Berets" - special forces, rangers - military personnel of subdivision military intelligence, "seals" - saboteurs of US naval special intelligence were trained to lay special small-sized nuclear mines, but already on the ground of the enemy, that is, in the USSR and other Warsaw Pact countries. It is known that such mines included М129 and М159. For example, the M159 nuclear mine had a mass of 68 kilograms and power, depending on the 0,01 and 0,25 modifications, kilotons. These mines were produced in 1964-1983.

At one time, there were rumors in the West that US intelligence agents were trying to implement a program for installing portable radio-controlled nuclear bombs in the Soviet Union (particularly in large cities, areas of hydraulic structures, etc.). In any case, units of American nuclear saboteurs, dubbed the Green Light ("Green Light"), conducted training sessions during which they learned to plant atomic "hellish machines" in hydroelectric dams, tunnels and other objects relatively resistant to "conventional" nuclear bombardment.

And what about the Soviet Union? Of course, he had similar means - this is no longer a secret. The special purpose units of the General Intelligence Directorate of the General Staff were armed with special nuclear mines PA41, PA47, PA97 and PA115, which were produced in 1967-1993.

The above-mentioned Mark Steinberg once reported on the presence in the Soviet army of portable explosive devices of the rya-xnumx-type backpack (rya-nuclear backpack). In one of his publications, an ex-citizen of the USSR writes: “The weight of X-Rum 6 is about 6 kilograms. It has a thermonuclear charge in which thorium and California are used. The charge power varies from 25 to 0,2 kilotons in TNT: Nuclear bomb is activated with a slow fuse actions, or remote control equipment at a distance of 1 kilometers. It is equipped with several non-maintainable systems: vibration, optical, acoustic and electromagnetic, so remove it from the installation site or neutralize it s almost impossible. "

So, and after all the American atomic "hellish machines" our special sappers learned to neutralize. Well, it remains only to take the hat off to the domestic scientists and engineers who created such weapon. It is worth mentioning the vague information about the allegedly (key word in this article) plans for laying sabotage nuclear mines in the areas of the mine launchers of American ICBMs that were considered by the Soviet leadership — they should have worked immediately after the launch of the missile, destroying it with a shock wave. Although it is, of course, more like action movies about James Bond. For such "counter-force bookmarks" would require about a thousand, which a priori made these intentions practically unrealizable.

At the initiative of the leadership of the United States and Russia, the sabotage nuclear mines of both countries have already been disposed of. In total, the United States and the USSR (Russia) produced, respectively, more 600 and about 250 small-sized backpack-type nuclear munitions for special forces. The last of these, Russian PA115, was disarmed in 1998. Whether there are similar "hellish machines" in other countries is unknown. The venerable experts agree that most likely not. But there is hardly any doubt that the same China, for example, has the capabilities to create and deploy them - the scientific, technical and production potential of the Middle Kingdom is quite enough for this.

And some other experts suspect that North Korea may have its own nuclear bombs embedded in advance tunnels. For nothing, the Juche idea followers are skilled masters of the underground war.