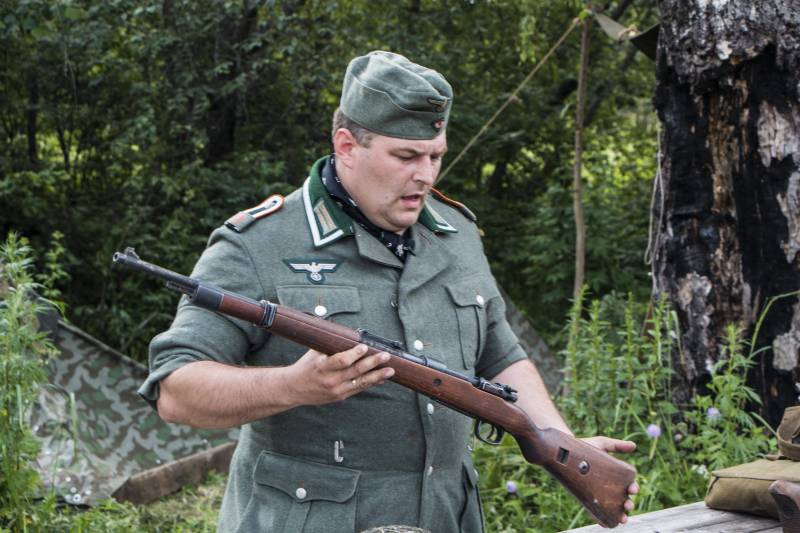 In 1898, the brothers Wilhelm and Paul Mauser created a rifle, which subsequently had a very long life and was released in huge numbers. The rifle received the designation "Gew.98" and was adopted by the German army 5 April 1898.

From 1899 to 1905, besides the rifle, the carbine "Kar.98" was also produced, which was distinguished by a shortened barrel, a "flattened" shape of the handle bent down, and a different fastening of the belt. In 1902, it was adopted as weapon for cavalry.

Somewhat later, a "Radfahrgewehr 98" carbine was created for scooters by the type of cavalry. "Kar.98" in its original form was produced only until 1905 year, when in connection with the adoption of the new 7.92х57mm cartridge, which had a pointed bullet instead of a blunt, the system "Gew.98" underwent the first changes.

In 1908, a new version of the carbine based on "Gew.98" appeared, which received the designation "Kar.98a". The 1923b carbine was released on 98. In fact, he was more likely not a carabiner, but a modification of the "Gew.98" with a simplified sector sight, the bolt handle bent downwards and the bent pin in front of the box - for the convenience of drawing up carabiners into goats.

The barrel was shortened even in comparison with "98". The bolt handle was bent down under 90 degrees and placed in the recess of the box, the belt was attached to the side on a simple swivel. The use of these decisions made the carbine a fairly compact weapon suitable for arming various types of troops (infantry, cavalry, motorcyclists, gunners, sappers, etc.).

The Mauser K98k carbines were completed with standard SG 84 / 98 bayonets, significantly shorter and lighter than the bayonets provided for the Mauser 98 rifle. Such a bayonet had a blade of length 25 cm with a total length of 38,5 cm.

Massive bayonet fights were uncharacteristic for the Second World War, therefore, in order to save 1944 from the end, rifles were no longer equipped with bayonet knives, they even lacked a bayonet mount and ramrod.

The 98k rifles were equipped with very short ramrods (regular ramrops of 25 cm and 35 cm are known) - in order to clean the barrel bore, it was necessary to screw together two ramrods.

Standard sniper rifles were used as snipers, and specimens with maximum accuracy were selected from the party. Used for shooting cartridges SmE (Spitzgeschoss mit Eisenkern - a pointed bullet with a steel core). 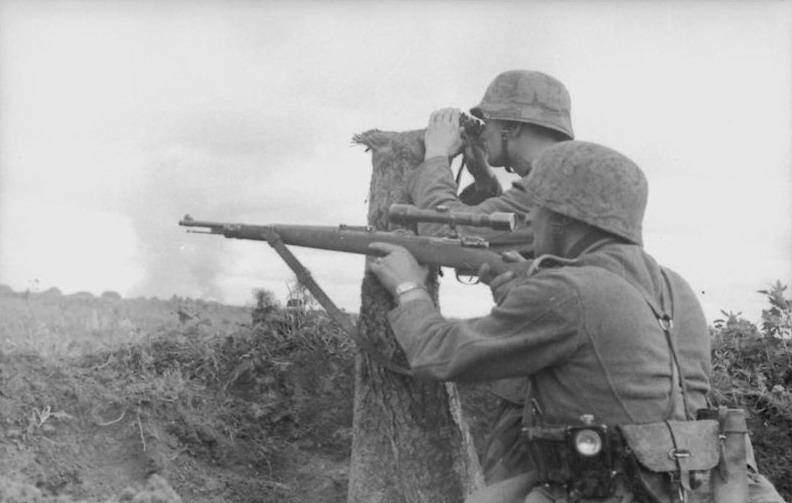 For sniper rifles used telescopic sights. The first type of telescopic sight officially adopted by the German army was the ZF 39 (Zielfernrohr 1939). Otherwise, this sight was called Zielvier (“quadbook”), this name was applied to other sights, providing a fourfold increase. In 1940, the sight received a standard graduation over a distance of 1200 m. It was mounted above the slide, and during the war the attachment design was repeatedly improved.

In July, the 1941 was adopted by another sight - ZF 41 (Zielfernrohr 41), also known as ZF 40 and ZF 41 / 1. K98k carbines equipped with ZF 41 began to enter the troops from the end of 1941. With a length of 13 cm, it provided only one and a half times increase, was attached on the left side of the rear panel, so it did not interfere with charging the magazine from the holder.

Due to the one and a half magnification, this sight could only be used for shooting at medium distances. A rifle with such a sight was positioned as a rifle for shooting with increased accuracy, and not as a sniper. At the beginning of the 1944, many ZF 41 sights were removed from many rifles, but the release of the ZF-41 / 1 continued until the end of the war. According to modern criteria, such sights are closer to the collimator, their use is due to the blitzkrieg plan, for which no trench warfare was planned.

In 1943, a cheap and reliable telescopic sight ZF 4 (or ZF 43, ZFK 43 and ZFK 43 / 1) with the multiplicity of 4X, designed under the influence of the Soviet PU sight, appeared. It was intended for the G43 self-loading rifle, but it was not possible to adjust the G43 in sufficient quantity and the sight had to be adapted to the Kar.98k rifle. The sight was placed over the bolt on the arrow-shaped mount, adopted a few months before the end of the war and released in a limited series.

At a very rough estimate, telescopic sights were equipped around 200 000 K98k. Approximately half of this amount falls on the ZF 41 sight, and the other half on the sights of the other types.

During World War II, a muzzle launcher and curvilinear nozzles (smooth-bore) were used for the Mauser 98k rifle, enabling them to shoot from behind cover.

The standard Gewehrgranat Geraet 42 rifle grenade launcher was attached to the barrel with a folding yoke. The maximum range of fire to 250 m. For a grenade launcher there were about 7 varieties of grenades. 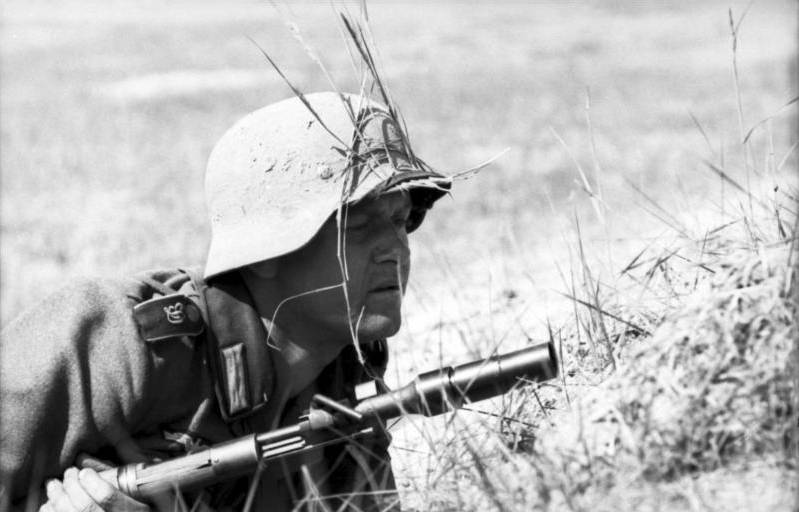 The GG / P40 anti-tank grenade launcher (Gewehrgranatgeraet zur Panzerbekaempfung 40) was developed specifically for paratroopers. It was lighter and smaller than the standard GG 42, produced in a small batch, attached to the rifle as a bayonet, intended to deal with enemy armored vehicles.

Krummlauf is a shelter firing device that can rotate the bullet stroke by 30 degrees. It was attached to the barrel of a rifle using the same mechanism as the barrel grenade launcher. Developed in 1943, after the manufacture of several prototypes, the main emphasis in the work on the curvature of the barrel was transferred to assault rifles. 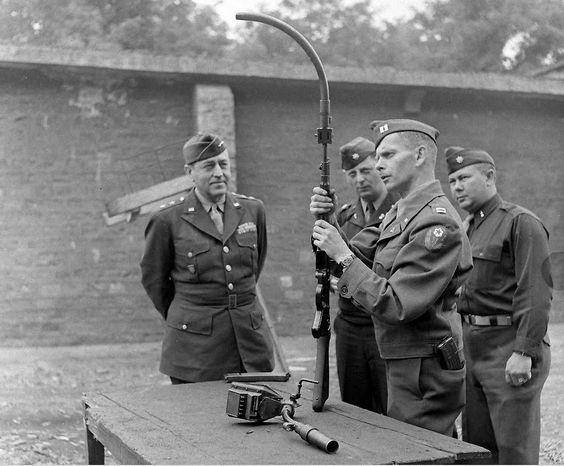 Winterabzug - a device for shooting a rifle in the winter. Developed in 1942, officially adopted in 1944. The winter descent consisted of an oval tin container with a lever inside and an outer trigger located on the side. The container was put on the trigger guard. Turning the outer trigger back, the shooter made a descent. It is not known how many such devices were made, but it was widely used by snipers, since it allowed them to shoot in the winter without removing their mittens.

There are two silencers for the Kar.98k: one is 25,5 cm long with a spiral surface, the other is 23 cm long. They are put on the barrel with a yoke similar to the mount of a grenade launcher. 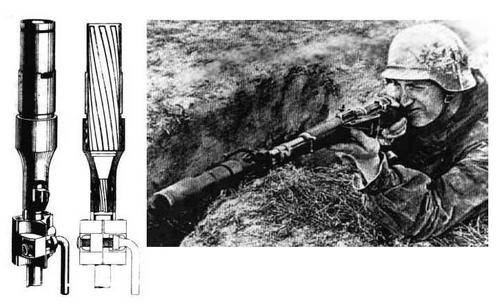 K98 was in service with more than 20 armies in the world, and was released in the amount of more than 14 millions. This weapon has proven itself from the best side. It was a carbine, and not a submachine gun, as it used to be, the main weapon of the Wehrmacht. 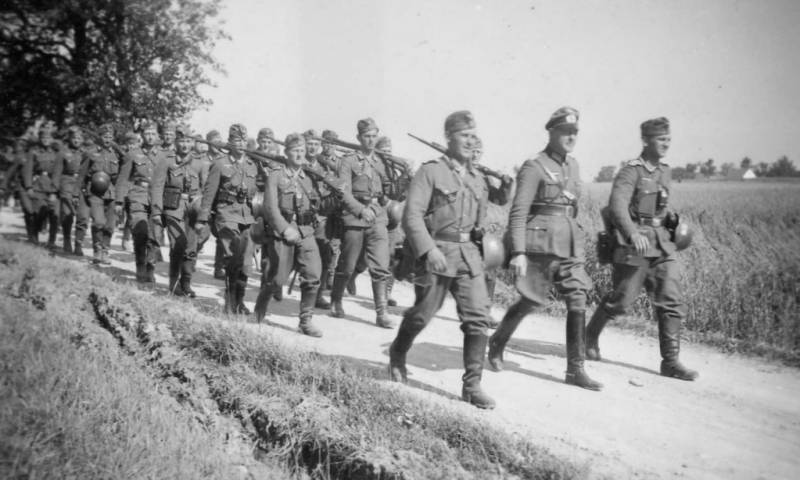 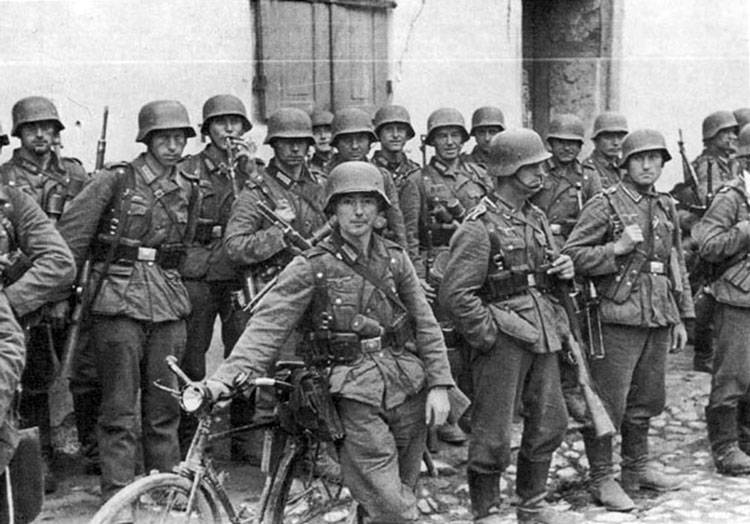 Nikolay Schukin, a military reconstructor and a specialist in small arms in Germany, will tell in detail about his device and principle of work in the video.