The Ministry of Defense of Belarus: the “West-2017” doctrine is not directed against other countries 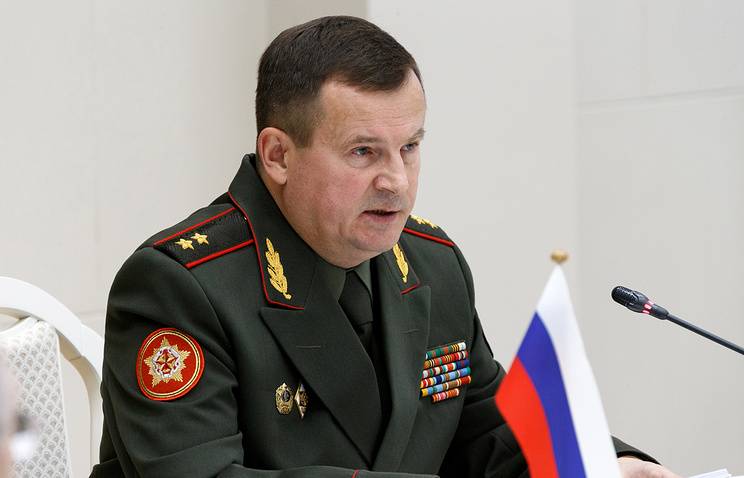 Reporter: Is it necessary to consider the "West-2017" as a response to the strengthening of the military component of NATO near the borders of the Union State of Belarus and the Russian Federation?

Ravkov: “The West-2017 joint strategic exercise of the armed forces of Belarus and Russia is planned and is carried out by decision of the presidents of our countries. The teaching is a demonstration of our constancy in ensuring the security of two fraternal peoples. Such exercises are held every two years, alternately in the territories of Belarus and Russia.

This doctrine is not a response to the strengthening of the military component of NATO near the borders of our states, although these actions cause natural concern on the part of the leadership of the Union State. In the course of the exercise, the military personnel of the two states will work out the issues of improving the interoperability of headquarters at various levels, as well as the interfacing of advanced troop control systems and weapons.

Practical actions of military authorities and troops will be held in Belarus at six ranges: Lepelsky, Borisovsky, Losvido, Osipovichsky, ranges of the Air Force and Air Defense Forces Ruzhansky and Domanovsky, as well as on the same area in the republic near the village of Dretun. As for the scale of the exercise, this is the largest event of joint operational training of the armed forces of the two countries. It is a logical conclusion to the preparation for the 2016 – 2017 school year. On the eve of the exercise, an 40 order of joint operational and combat training activities, including joint special exercises by type of support, has already been held. ”

What forces will be involved in the maneuvers from the Belarusian side and what is the Russian component in the exercise?

Some states over the past months have expressed concern about the Belarusian-Russian exercise. The question is being actively exaggerated that the alleged Russian military will remain in Belarus after the completion of Zapad-2017. Is there a reason for this?

“For the past several months, the same accusations have been heard, based not on facts, but on conjectures. Here are the “fears” about the fact that Russian troops can allegedly remain on the territory of Belarus after the Zapad-2017 exercise, that the exercise itself is not defensive, but offensive and “directed against NATO, and specifically against the Baltic countries and Poland ". We agreed to the fact that during the exercise "it is supposed to work out the creation of the Kaliningrad corridor, which in reality is impossible without aggression against Lithuania and Poland."

The position of the leadership of our country in connection with this reaction to the West-2017 doctrine was described in detail by the President of the Republic of Belarus, who called it all an attempt to break our military-political unity with the Russian Federation. "NATO places its troops directly at our borders and the borders of our allied Russia. They demand from us: you close, there should not be any exercises" - I quote the president of our country. These words are addressed primarily to the leaders of Western states and the international community in connection with the escalation of international tensions and the intensification of military activities in the world and Europe.

For example, you can compare the characteristics of "West-2017" with the parameters of the exercise "Anaconda-2016", held in 2016 in Poland. We have to admit that in terms of quantitative indicators our Western partners have a multiple superiority. They have involved more than 30 thousands of personnel from NATO member countries against 12,7, thousands of soldiers of the Union State, more than 3000 units of weapons and military equipment against 680.

At the same time, the teaching of "Anaconda-2016" did not cause hysteria in our country, we treated the past teaching with understanding. As for the content of the issues being worked out in the exercise in Poland, they had a pronounced unfriendly character and included the deployment of a reconnaissance system, the transfer of troops to the border of the Republic of Belarus, and the development of offensive tasks. So who needs to be concerned?

Of course, retaliatory steps on the part of Belarus and Russia in connection with the escalation of military preparations in neighboring countries were inevitable. This is at least a complex of measures to strengthen the defense capacity of the Union State, which are not limited only to conducting joint exercises. ”

Will international observers, including representatives of NATO, be able to follow the course of the exercise directly at its venues?

“Despite the fact that the number of personnel declared for the West-2017 exercise, the number of armored combat vehicles, artillery, aviation do not reach the threshold for notification, we will invite our partners so that they can see for themselves that the teaching does not solve the problems they state. At the same time, not only military attaches accredited to the Ministry of Defense of the Republic of Belarus will receive invitations, but also a number of international organizations such as the UN, OSCE, NATO, CSTO, CIS, ICRC.

We are waiting for observers from our neighbors: Ukraine, Poland, Lithuania and Latvia. Under bilateral agreements, observers from Estonia, Sweden and Norway are invited. A total of over 80 observers will be invited. We have nothing to hide. The themes of our defensive teachings "

Belarus and Russia actively interact in the military-technical sphere. It is also about the procurement by Belarus of modern models of weapons and equipment in Russia. What will the Belarusian army get in the near future?

“The process of equipping the Belarusian army with new types of weapons is continuous. In the first half of 2017 of the year, six Mi-8MTV-5 helicopters, the fourth Tor-М2 air defense system, the Oppotnik-G radar station, two radio monitoring and radio monitoring systems "Torn-8P" and various types of modern sniper and special weapons.

In addition, a deep modernization of the first batch tanks T-72B to the level of T-72B3. In order to update the fleet of military aircraft, the Ministry of Defense signed a contract with the scientific and production corporation Irkut for the supply of 12 Su-30SM aircraft from 2018 to 2020, four aircraft per year. Due to technical changes in the configuration, the delivery dates can be postponed for 2019–2020. This year, contracts were also signed for the supply of two Opponent-G radars with a set of spare parts for them, as well as three complexes of radio monitoring and radio monitoring Torn-8P. In the near future, a contract for the supply of the fifth Tor-M2 SAM battery is planned for signing. ”

Does the close military cooperation between Belarus and the Russian Federation not interfere with conducting a dialogue with NATO, the United States, and the military departments of other states? In what areas is Minsk ready to develop cooperation with NATO?

“The concept of national security of the Republic of Belarus among measures to protect against external threats to security is determined to conduct a consistent and balanced multi-vector foreign policy based on the principles of mutual respect, equality and partnership, non-interference in the affairs of sovereign states. Our country adheres to the constructive position of the development of dialogue, including with NATO countries, regarding it as one of the important directions in ensuring national security.

Given the order of 1200 kilometers of a common border with NATO member countries, the development of a dialogue with this organization is a natural process of the state’s foreign policy. In this vein, the NATO Partnership for Peace program is a tool for strengthening interaction in the political, military, economic, scientific and legal spheres both with the alliance as a whole and with the member states and NATO partner countries individually.

In 2015 – 2016, we re-established military contacts with the United States, including accredited defense attaches. As part of the consultations, a search for mutually beneficial, without prejudice to our allied obligations and integration priorities, points of contact took place. This implies that maintaining a dialogue with the United States on international and regional security is an important step in terms of reducing tensions in the region. This finds understanding and support from our strategic ally - the Russian Federation.

Building relations with our Western partners does not contradict the declared priorities in the coalition military policy of Belarus. According to the military doctrine of the Republic of Belarus, among the main priorities in the coalition military policy in the first place is the strengthening of the collective security system and the further development of relations with the Russian Federation under the Treaty on the Establishment of the Union State and with the CSTO member states under the Collective Security Treaty. ”

Photos used:
Vadim Sawicki / press service of the Ministry of Defense of the Russian Federation / TASS