Festival "Battlefield". Thoughtful analysis based on what you see 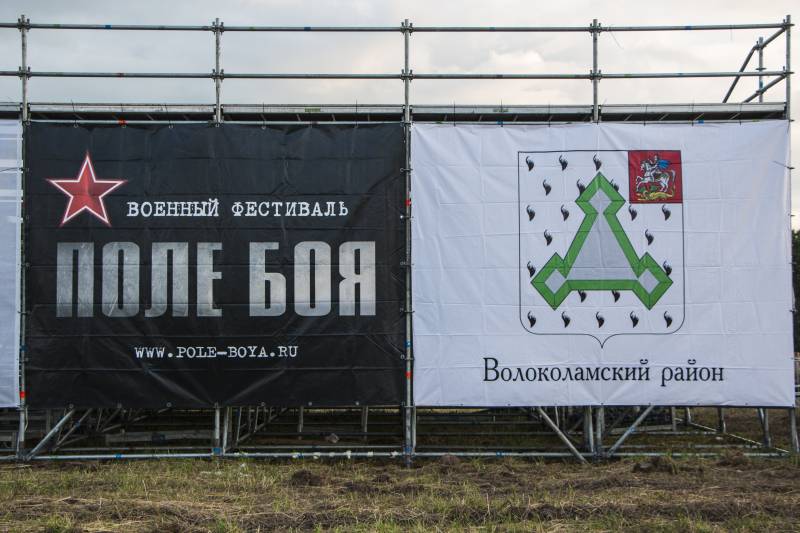 Not so long ago, smashing down one small town "militaryhistorical festival ”, I made a promise to compare it with a similar event. At that time, we already had an invitation to visit the Battlefield. And since we were almost the only media of this level, that is, confidence that this report will be useful.

We have certain experience in attending events of such a plan. So there is something to compare.

So, the “Battlefield” is not like any military-historical festival (VIF) that we have seen before. And, since we recommend this event in the future to all real history buffs (and especially to children), we will go through all the points in detail.

I'll start with the organization. 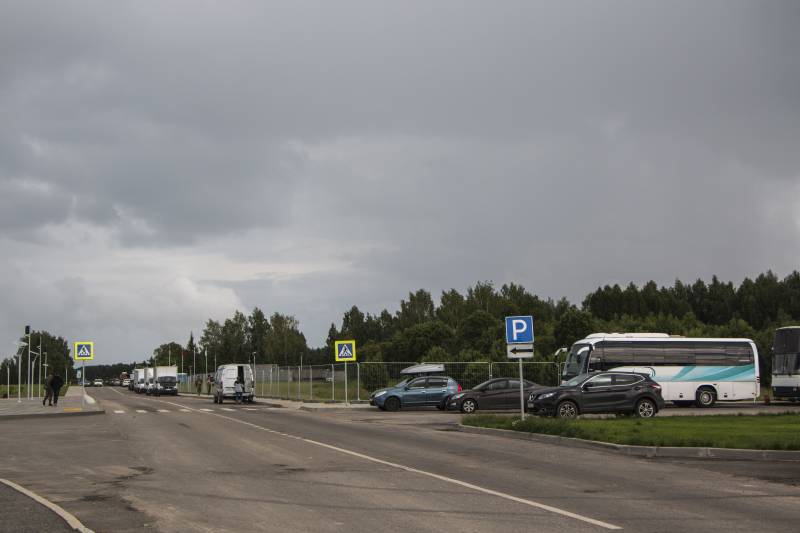 With parking problems were not. Despite the fact that the ground platform drowned safely, they came out of the situation. 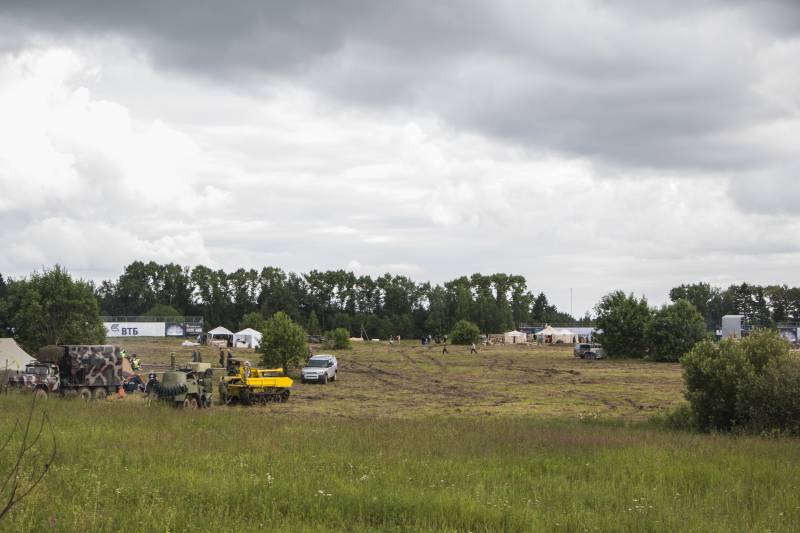 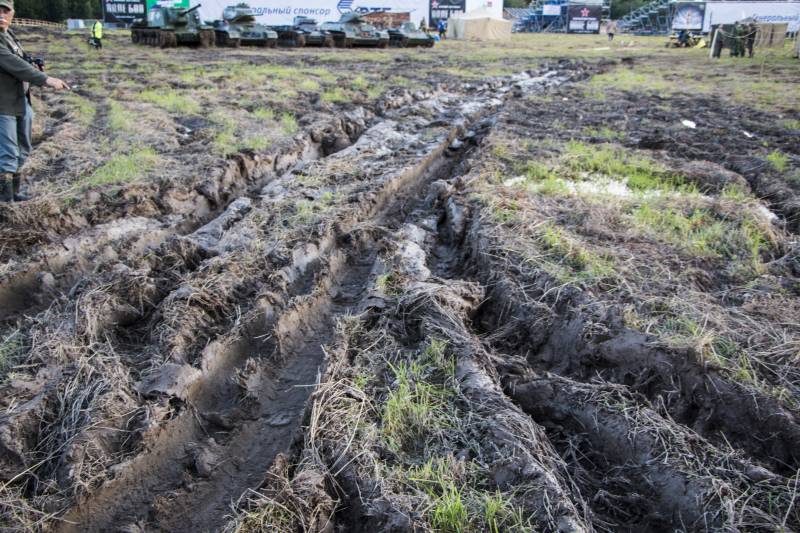 "Battlefield" ... There were many.

First of all, it was surprising that the already familiar format for military reenactors “arrived, settled, drunken, shot, parted” does not work here. That is, who wants to use, that, of course, use. And nothing can be done about it, it has already happened.

The camps where the recons were housed were not just removed from the main site, but so much so that traveling to them in conditions of mud was one more task. Plus, the magnificent work of the gendarmerie (the Germans) and the NKVD (the Soviet side), clearly working in the direction of what should not be superfluous in the camps. They were not there.

But somewhere you had to look at life? It is necessary. That's right, on the interactive platform. 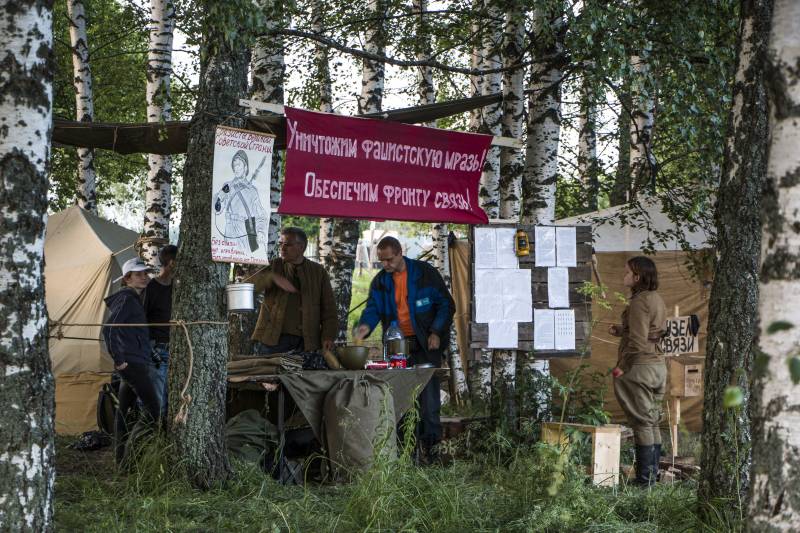 Unlike other VIFs, the whole interactive area was perfectly organized. And she worked. And how it worked ... I just pay tribute to those who worked at these sites. The fact that it was built there, especially in those weather conditions, is a real feat. And beautiful.

And worked on these sites, in conditions close to the fighting, about the same. They told, explained, demonstrated. They were allowed to shoot, and not only from small weapons. We will tell about it separately, because for the “Military Review” they even shot from an 75-mm anti-tank gun, in addition to everything else that we are going to talk about.

Terms of life. About them it is worth saying a few words. The first thing I remembered when I saw the rows of blue booths was Aviadarts and the usual lines. Apparently, the organizers, with an understanding of the importance of this moment, are much better than those of colleagues from the Ministry of Defense, therefore, in terms of biotoilets, the Battlefield paid Aviadarts several times. Both in quantity and quality. Generally, having estimated the number of blue batteries, we came to the conclusion that from any point of the festival to the nearest place there were no more than 300 meters. You say a trifle? Well, you did not spend all day on Aviadarts, it means. 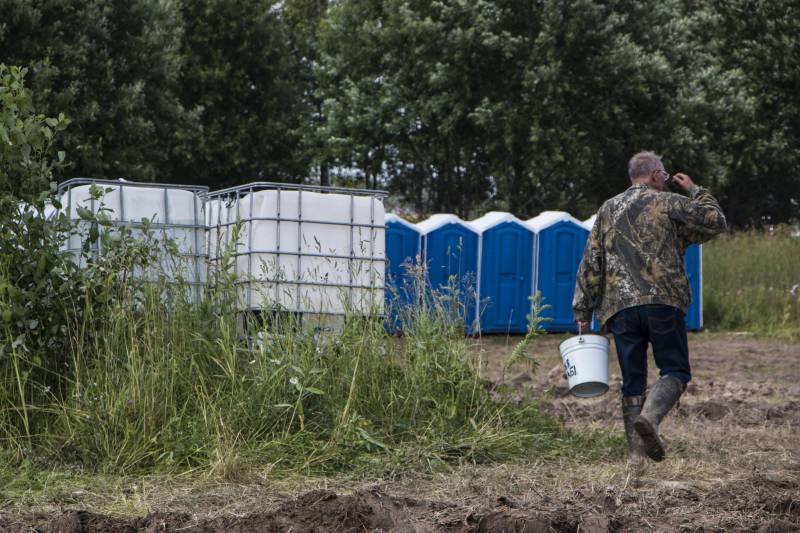 The same is true in the camps for the participants. Only the distance is even smaller.

There was a dining room. For participants of the same. We, as owners of yellow trousers (“everywhere” passes), were also among those who were put on rations, for which real thanks to the organizers. It had a very topic. And it was not one field kitchen, where something was prepared like that, it was a real nurse who could feed a couple of thousand participants with food. 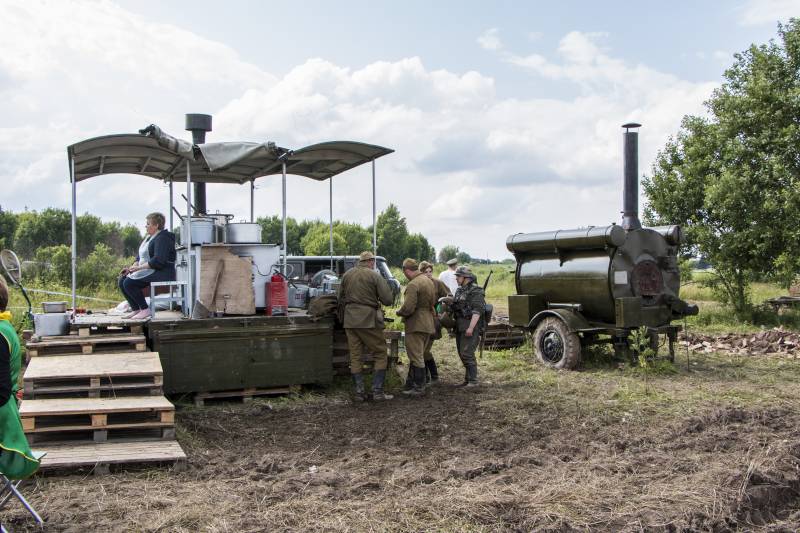 It would be possible to find fault with the menu, buckwheat really asked for the taste of meat or stew. But the soup was quite the same soup, that is, tasty and hot. Well, tea and coffee in general can be spoiled only by the absence of components. Not spoiled. Plus, as if the timely cleaning of disposable tableware and clean hands and dressing gowns of cooks is nice. 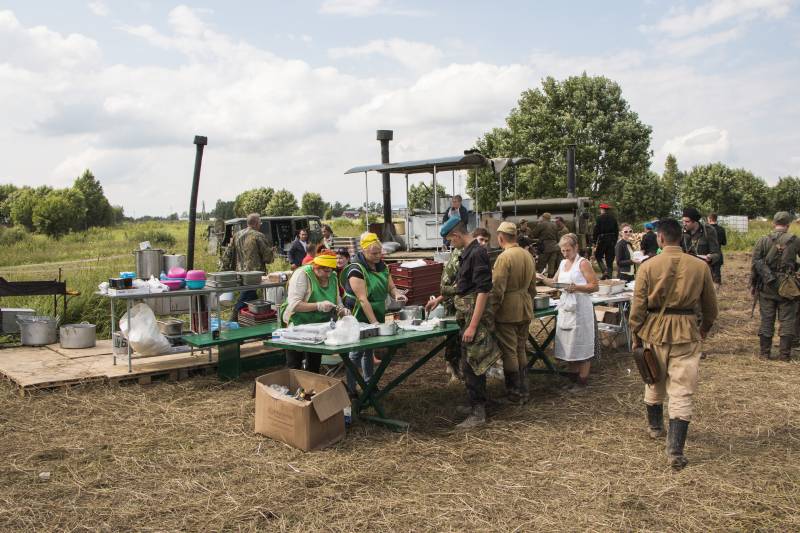 I must say that the weather, having rehearsed on the "Invasion", tried and here to izgadit. Rain tried all week, but ... It did not work out. Although there were many difficulties.

Starting from the fact that only tracked vehicles and something all-wheel drive and with large wheels could move normally on the landfill. On the gray muzzles of the "Hanomagus", if desired, one could read a slight surprise of the type "... this was all already ..." 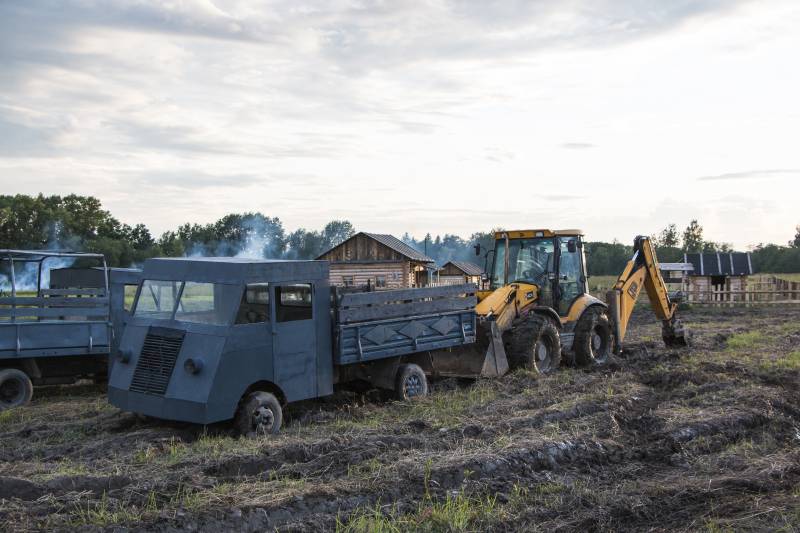 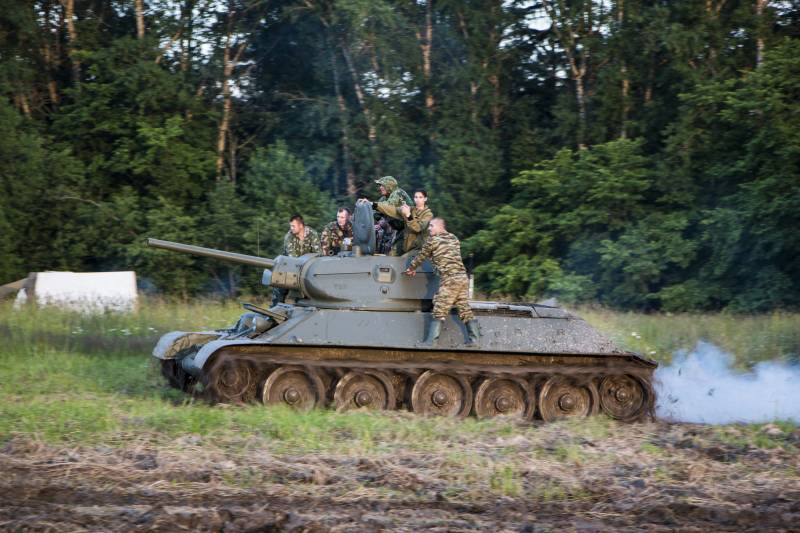 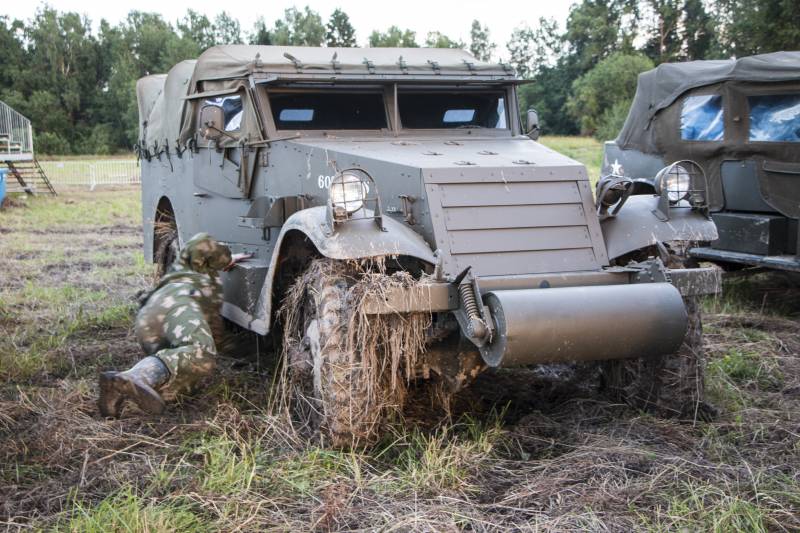 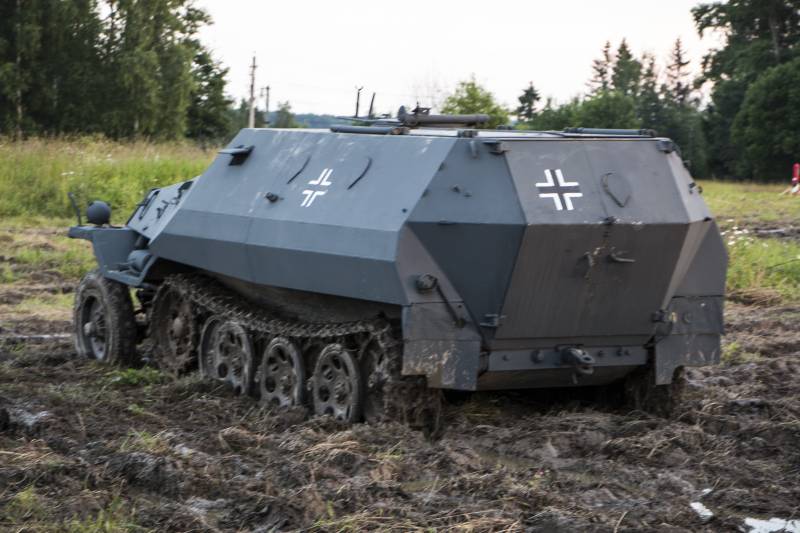 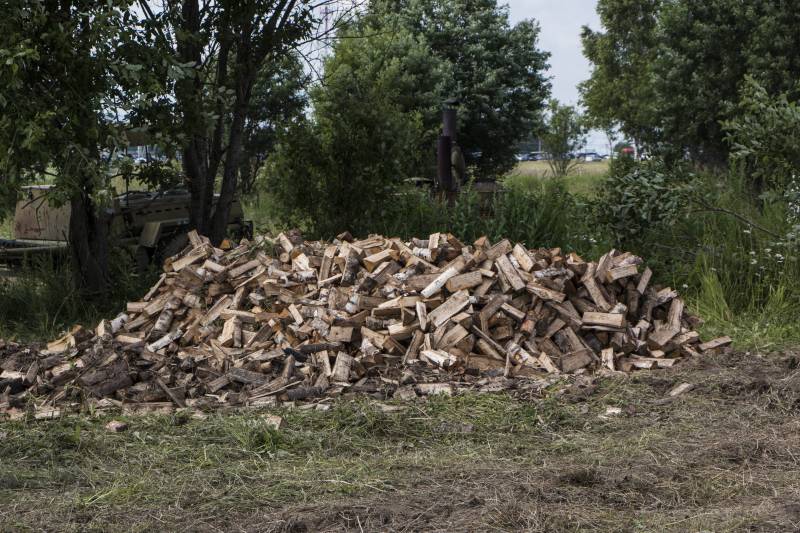 As far as I know, they did not suffer from lack of water and firewood in any camp. He himself was a witness to the supply, and not on signal. 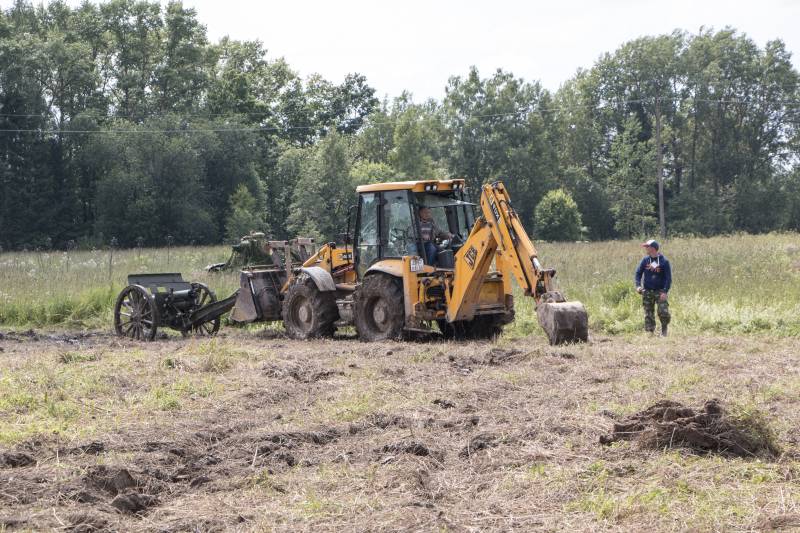 Evacuation tools after the next event. Four-wheel drive + bucket and hydraulics

On the management of the show itself, that is, when the reconstruction began directly. Our radio stations allowed us to scan the frequency of the organizers and be aware of everything that happens, so to speak, directly.

As a person who has experience in setting and holding events, even if not on such a scale, I can say: this is aerobatics. Such a clear, up to a minute, the sophistication of all actions, is not just respect. I myself know what this clarity is about. Yes, there were delays, but I am sure that those gathered in the stands did not notice them. 3-5 minutes, no more. And even then this was caused again by impassable mud that was used to carry guns. Tractors were in short supply. 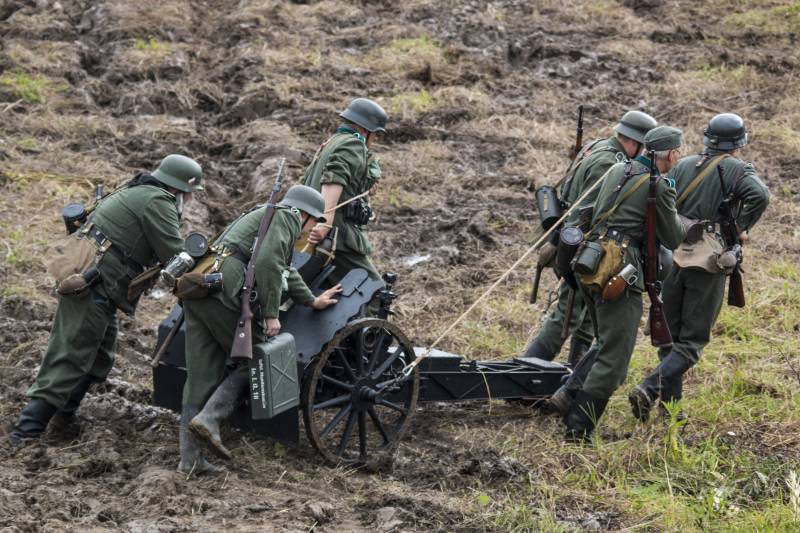 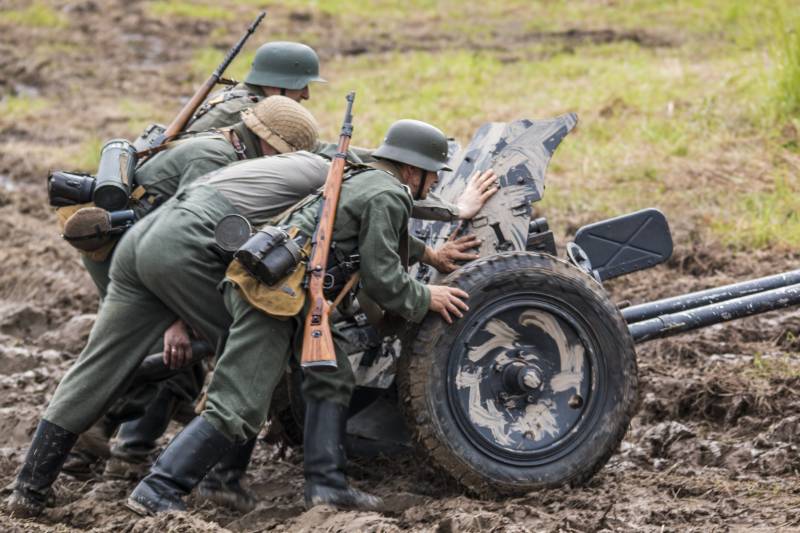 Very impressed culture on the air. For the whole day, believe it or not believe it, but I never heard the mat. Very calm, very kind. "... are you ready?" - "Give me three minutes." - "Well, we start in five minutes." And - the presentation began. Exactly five minutes later.

Separately, I want to say about the commentator. Man is a masterpiece. He didn’t just comment on what was happening, it wouldn’t surprise me after “ARMY” and “Army Games”. But how ... A man knew the script perfectly, was well aware of what was happening and more than once, listening to the broadcast and him, we understood that he often "dragged" arising hitch and pauses on himself. And he did it more than great.

When the speakers are not just a “talking head”, like on the forum “ARMY-20 ..” (he has already become the talk of the town, there is a karma ten lives ahead spoiled, because he doesn’t look around when he speaks generally, apparently) and a person who understands the essence of what is happening and, most importantly, worries about the process, then we get a sound series - a decoration of the event and an assistant in understanding the action on the field.

Professionalism is what we often talk about, and what is missing in many areas. Here everything was professionally done. Not on the "back off". Where not to look. Thoughtfully and implemented with a very high degree of professionalism.

Yes, on the part of the participants there was a whiff about some “excesses” on the part of the organizers. But these are already matters in which I am not an expert, and I don’t presume to judge. “Identity” and “authenticity” is not for me to judge. If you want everything to be with a match on 99% - then it should be.

As if I didn’t like just two things. The first is a car stuck behind the chains of the advancing Germans. Nice spoiled picture. And the second - on the reconstruction of 1942 of the year, where the fighters came out of the environment according to the text of the commentator. Well, in this form of the environment is unlikely they came out.

Otherwise, everything is just great. Really aches the soul. The excellent organization and the great desire of the participants turned the reconstruction post-girl into a beautiful performance with continuation. Continuation - this is an interactive platform. This is the pearl of the festival, this is what was so lacking in other similar events that I attended.

Separately, I note that this was the first (but certainly not the last for me) VIF, which had not one action, but entire 7. More precisely, 6 + 1. One event was a trial, not for the public. I hope so far. "Partisans" - it was amazing.

The fact that the organizers threatened both the First World War and the Civil one (a very complicated and not the most successful production in my opinion), and for both periods of the Great Patriotic War, does them honor. It was hellishly difficult, but they did it.

It is difficult, as it turned out, to simply reconstruct. Facts in bulk. Just play one plot. Seven were played here. In two days. That is three per day. This is incredibly difficult. I saw the gleam in the eyes of these people, something akin to fighting madness. I respect you.

I respect and admire the wholesale of all. And the organizers, who started it all and did it. Moreover, it should be emphasized on their own. No grants, no help from the same Russian military-historical society. They themselves found sponsors (thanks to everyone, especially VTB, who gave money to Mosfilm, which gave the technique), they themselves organized and conducted everything.

Thanks to all the participants who spent from one to four weeks on this field, built all the props with their own hands, and for two days pleased everyone who was not afraid of showers and mud. 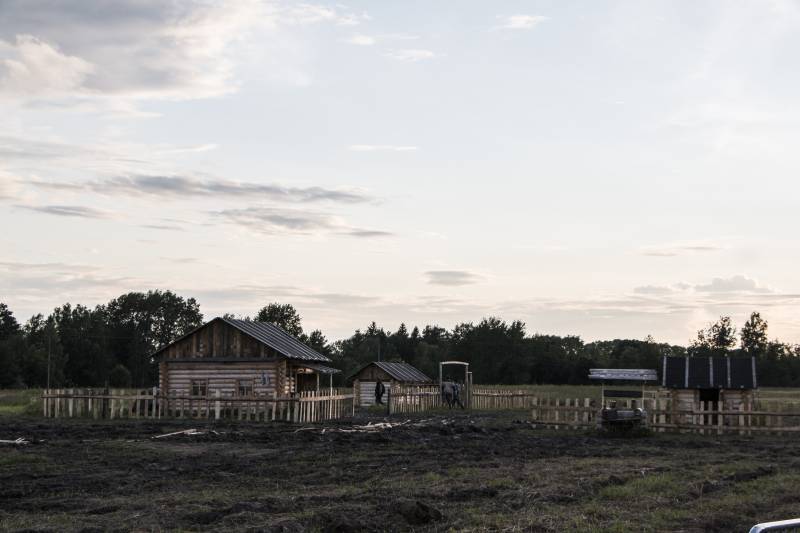 Thanks to the viewers who are not really scared and arrived. The participants told me that everyone was very worried that the people would not come after the “Invasion”. The people arrived, the stands were full. That only added fire to the participants, after all, they are mostly actors in some way, and empty stands would hardly please anyone. 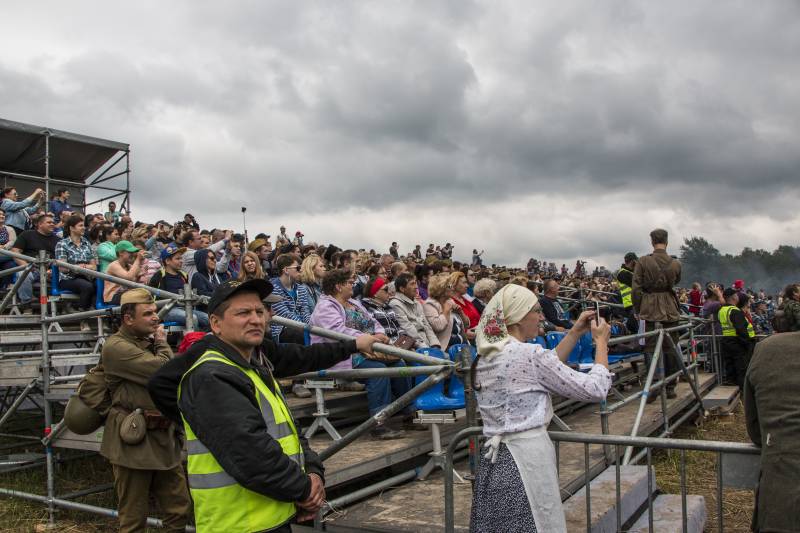 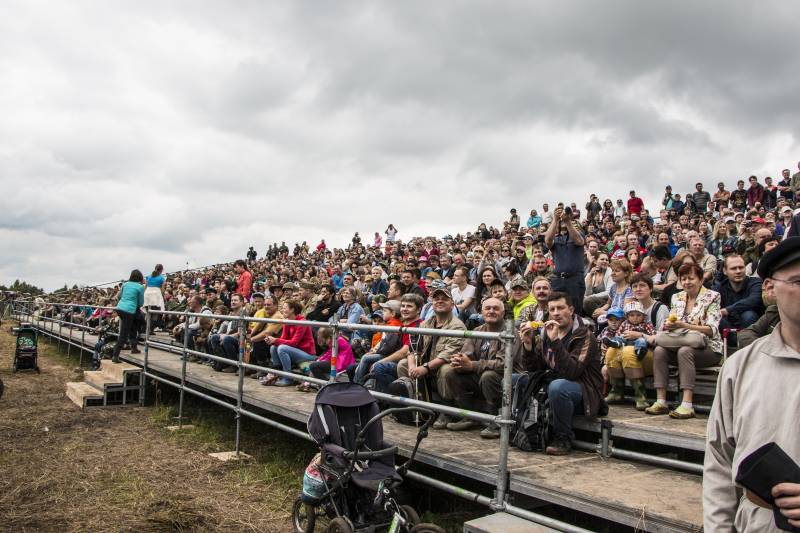 A look at both the stands of a large venue

Everyone worked with pleasure. I will allow myself to bring one dialogue, which I myself witnessed. Between the participant working on the interactive platform from the Moscow club "4 company" and the audience years 10-12. The boy gladly squeezed the German carbine and the "Luger", which the "German" gave him, and then there was this dialogue:

- Uncle, is this a good gun?
- Yes very good…
- Is that a cool rifle?
- Yes, very good ...
- And your gun?
- This is a very good gun.
- Uncle, why did we win then?
- What is your story?
“I have five stories, but we haven’t passed this war yet ...”
- And you do not pass it. You yourself read and watch movies. Only good books and films to be. And love your great-grandfathers, even if you have not seen them. Just love how you should love your homeland.

What I would like to say in the end. What I saw on the “Battlefield” somewhat changed my view on the military-historical reconstruction. Very much changed. If all military-historical festivals were held in this way, we really would have reduced the headache about patriotic education.

Of course, it’s cool to stick to the “Invasion”, I don’t argue. Drive and all that ... But I recommend (if my opinion means something) to everyone who can afford to attend this festival. You will not regret a single ruble spent. Unfortunately, the reality is that in the absence of state support, the organizers are forced to pay for events. It is possible, of course, that the situation will ever change for the better, but for now it is.

You can consider it an advertisement, so be it. It is better sometimes to advertise a great event dedicated to our history, to plunge a little into the life of that war (there really were masterpieces of military architecture, we will tell about them) than anything else.

The “Battlefield” festival is worth spending time with. From dusk to dawn.