The most famous battle of the Russian-Polish war

July 18 2017
21
18 July, 1792, the battle of Dubenka took place - one of the most interesting and famous episodes of the Russian-Polish war 1792. As you know, the cause of the outbreak of hostilities was the dissatisfaction of the Russian empire with the adoption of the new constitution of the Polish-Lithuanian Commonwealth, which was more democratic in nature and attempted to soften serfdom and equalize the political rights of the gentry and the urban population. Naturally, the constitution caused discontent on the part of the adherents of the old feudal order, which was supported by the Russian Empire. The opponents of the constitution united in the Targovitsky gentry confederation, the marshal of which proclaimed Count Stanislav Schensnogo Potocki. On the side of the confederation were the great crown hetman Francis Xavier Branicki and the full crown hetman Severin Rzhevuski, who were the chief commanders of the Polish crown troops. A number of other prominent Polish aristocrats joined the confederation and did not want to lose their privileges and to allow the revision of the old feudal orders of the Polish-Lithuanian Commonwealth. Thus, formally the Polish armed forces found themselves under the authority of opponents of the new constitution. 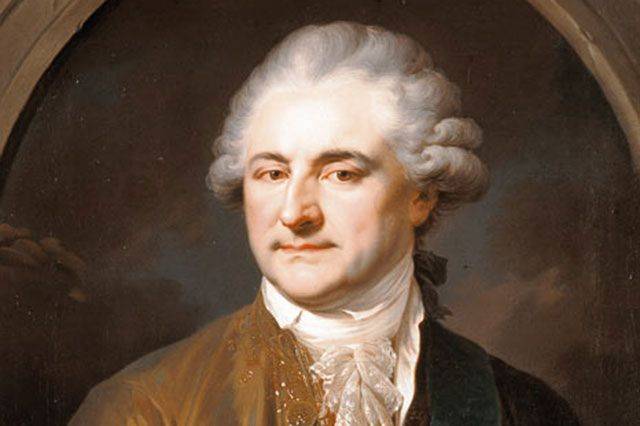 Nevertheless, supporters of the constitution were able to quickly form a fairly large army, organized in the European style and numbering about 70 thousands of soldiers and officers. This circumstance was promoted by the fact that the constitutionalists were supported by King Stanislav Augustus Poniatowski, who occupied the throne from 1764 of the year and was distinguished by highly enlightened and liberal customs. King Stanislav was supported by the liberal part of the gentry, while large magnates were more inclined to the Targowitz Confederation.

The army consisted of Lithuanian and crown troops. The Lithuanian army was stationed in the vicinity of Minsk, commanded by Lieutenant-General Duke Ludwig of Württemberg (later replaced by Lieutenant-General Jozef Yuditsky, who, in turn, was replaced by Lieutenant-General Mikhail Zabello). In the Kiev and Bratslav provinces stood the forces of the crown army, commanded by Major-General Prince Jozef Ponyatovsky. However, the generals Ludwig Württemberg and Jozef Yuditsky did not demonstrate great reliability, they did not really want to command the troops and, especially, to participate in hostilities with the Russian Empire, which was the reason for their early removal. Much allegiance to the king and constitutionalist ideas was demonstrated by Major General Jozef Ponyatovsky. 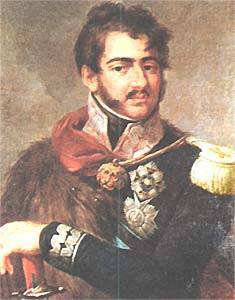 29-year-old General Yousef Ponyatovsky was due to his rapid career growth to his origins. His parents were Austrian Field Marshal Anzhe Poniatovsky and Countess Maria Theresa Kinsky, and his uncle was Stanislav Augustus Poniatowski - the last Polish king.

When the Russian troops launched an offensive, they rather quickly pushed the Polish army back and began pushing it deep into the Polish lands, freeing the territory of modern Ukraine from the Polish-Lithuanian troops. The army of General-in-Chief Kakhovsky pursued the troops of Prince Jozef Poniatowski.

7 (18) June 1792, the troops under the command of Poniatowski managed to successfully enough to resist the Russian troops in the battle of Zelentsy. This was facilitated by the temporary numerical superiority of the Polish troops over the Russian troops - the 11,5-thousandth Russian contingent under the command of brigadier Irakli Morkov was opposed by the 15,5 thousands of Poles. In honor of the battle, which became the first relatively successful battle of the Polish army in this war, King Stanislav Augustus established the Order of Virtuti Militari, which awarded both Prince Poniatowski himself and General Tadeusz Kosciuszko, commanding one of the divisions of the crown army.

About General Tadeusz Kosciuszko is worth special mention. Although it was a staunch enemy of the Russian state, it is difficult to refuse him personal courage. Kostiushko, a man of unusual destiny, in his life visited not only the Polish service. Unlike Jozef Ponyatovsky, Major General Kostyushko was already a relatively elderly man 46 years old. He had studied at the Knight School in Warsaw, where Kosciusko made great strides in military architecture and fortification, and studied in France at the Royal Academy of Painting and Architecture, serving as a volunteer military engineer in North America during the American Revolution and the Revolutionary War. Kosciusko was enlisted in the rank of colonel in the American army, then received the rank of brigadier general. 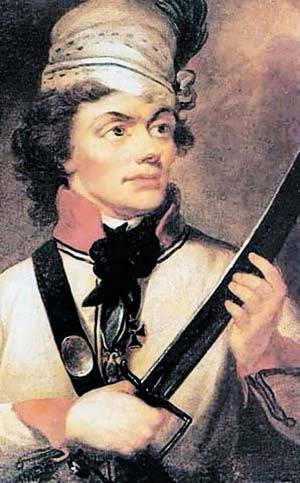 Only in 1784, Kostyushko returned to Poland. Soon he entered the service in the revived Polish army and was promoted to major general. Initially, Kosciuszko, a native of the Grand Duchy of Lithuania, expected to get into the Lithuanian army, but he was enlisted in the crown army. Kostyushko did not refuse to be appointed, in order not to lose the great general's salary, which was supposed to him upon the appointment of a division commander. And, besides, as a patriot of the Commonwealth, Kosciusko really wanted to contribute to the modernization of her army.

When the Russian-Polish war of 1792 began, Tadeusz Kosciuszko took an active part in it. The division under the command of Major General Kosciusko served as a rearguard in the battle of Zelentsy, but the "crown" output Kosciusko occurred just during the battle of Dubenka. Before the division, commanded by General Kostyushko, Ponyatovsky was tasked with protecting the southern flank of the front, which was adjacent to the Austrian-Polish border. In early July, the 25-thousandth army of Prince Poniatowski crossed the Bug. Polish troops stopped at Dubenka. The division of Tadeusz Kosciuszko, which included 5300 soldiers and officers and 24 artillery guns, received an order from Prince Poniatowski to guard the ferries. For this task, Kosciusko placed his forces between the villages of Ukhanka and Volya-Habova.

Since Kostyushko was a professional in military engineering, he strengthened his position with trenches and flash drives, placed artillery batteries - in general, he prepared himself thoroughly to protect the line entrusted to him. It is worth noting here that the Kosciuszko divisions were opposed by much more numerous Russian troops totaling 25 thousands of people with 108 artillery guns. They commanded General-in-Chief Mikhail Kakhovsky. 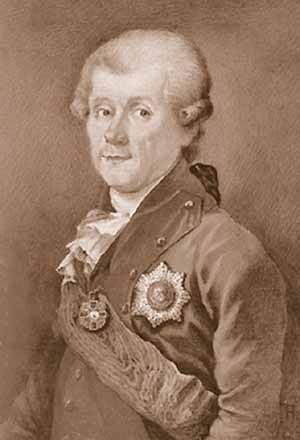 By the time of the events described, Count Mikhail Kakhovsky had been in military service for forty years. He joined the army as a very young 18-year-old, in 1752, he participated in the Seven Years' War, in the Russian-Turkish wars, in ensuring the annexation of Crimea to Russia. He was already an experienced military leader, who had fought his whole life against various opponents, from Turks to Poles. By the way, Lieutenant-General Mikhail Illarionovich Golenishchev - Kutuzov, one of the corps of the Moldavian army commanded by General-in-Chief Kakhovsky, later became a famous hero of World War 1812, commanded one of the corps.

The whole fortified area was in the hands of the Russian army. Now nothing could impede the further advancement of Kakhovsky's troops towards Lublin. Nevertheless, despite the victory in the battle, Russian troops suffered very heavy losses - about 500 people were killed. Poles in this battle killed 900 people. By the way, Polish historians tend to overestimate the losses of the Russian army, talking about 4000 about the dead soldiers and officers of the Russian army. Do not forget that Kosciuszko managed to organize a clear retreat of his division, not allowing chaotic flight. This circumstance later allowed even the opponents of Poland to talk about the commanding talent of General Tadeusz Kosciuszko. The merits of the general were evaluated by the Polish king Stanislav Augustus Poniatowski, who produced Tadeusz Kosciuszko as lieutenant general. Nevertheless, the deplorable situation of the Polish troops could not be saved by anything. A week after the battle at Dubenka, the Polish army was forced to capitulate. The king ordered the Polish troops to cease hostilities against the Russian Empire, because he realized that the crushing defeat inflicted on the Polish army under Dubenki would no longer allow them to adequately resist the enemy. The fame of the feat Kostiushko, who managed to organize a decent resistance superior Russian army, spread throughout Western Europe, causing special admiration in revolutionary France. 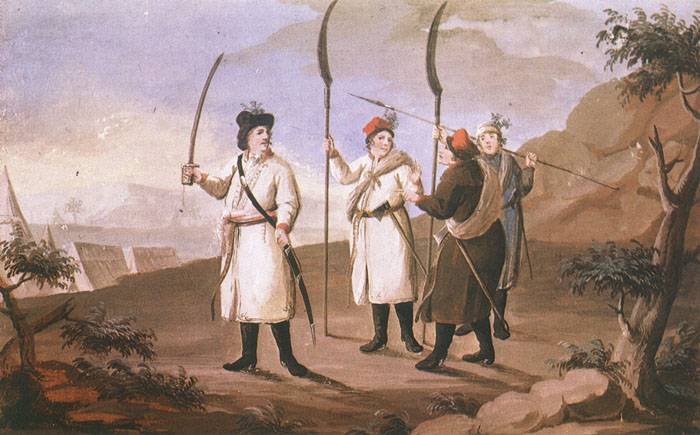 Poland’s actual capitulation upset Tadeusz Kosciuszko very much. Lieutenant General refused further service in the Polish army and retired. Soon he went to Europe, where he tried to consolidate the forces of Polish emigration for the further confrontation of Russia. As you know, in 1794, Tadeusz Kosciuszko became one of the key leaders of the next Polish uprising. He was captured, for some time he was imprisoned in the Russian Empire, until he was released on the personal instructions of Emperor Paul I. After liberation, Kosciusko went to the US, and from there in 1798 he moved to France. By 1801, settling in France, he moved away from active political life, but after that he lived for a long time, having died only in 1817, at the age of 71.

Jozef Ponyatovsky after the defeat of Poland emigrated, but then returned and took part in the 1794 uprising of the year under the leadership of Tadeush Kostyushko. The suppression of the uprising forced Ponyatovsky to go to Austria, and his possessions in the Polish-Lithuanian Commonwealth were confiscated in favor of the Russian Empire. But later Paul I tried to attract Poniatowski to the side of Russia and even ordered to return his property to the prince. However, he did not enter the Russian service. But when Napoleon embarked on his Russian campaign, Jozef Ponyatovsky entered the service of the emperor of France and led the Polish corps. Napoleon Bonaparte appointed him Grand Duke of Warsaw, and after Poniatowski distinguished himself in the battle of Leipzig in 1813, he was given the title of Marshal of France. Jozef Ponyatovsky died in the 1813 year, covering the retreat of the French troops. Subsequently, after his removal and exile to Saint Helena, Napoleon Bonaparte spoke very warmly about Poniatowski and even claimed that only this person was suitable for the role of the Polish king for his personal qualities, being a man of honor, brave and noble.

Interestingly, Tadeusz Kosciuszko, in contrast to Jozef Poniatowski, did not support Napoleon Bonaparte. Despite numerous attempts by Napoleon and his comrades-in-arms to bring Kosciusko to participate in the Russian campaign, the celebrated general remained indifferent to Napoleon's persuasion. Moreover, it was not so much about age, but Kostiushko’s unwillingness to help France fight against Russia and use Polish soldiers as cannon fodder. By the way, Kostyushko himself deserved a very respectful attitude not only from European politicians, but also from top officials and major commanders of the Russian Empire.

The General-in-Chief Mikhail Kakhovsky soon had a conflict with Count Valerian Zubov, after which the old commander was recalled from Poland and appointed Governor-General of Nizhny Novgorod and Penza. Then he was again allowed to lead the Russian troops stationed in the Crimea. Kahovsky, who was promoted to infantry generals, was appointed head of the Tauride Division and chief of the Sevastopol Musketeer Regiment. But the favor of Emperor Paul to the old general did not last long. In 1800, Kakhovsky was dismissed from service “for old age”. In the same year at the age of 66 he passed away.