The floating nuclear power plant Akademik Lomonosov is intended for operation in the regions of the Far North and the Far East, in particular, to ensure reliable power supply to Chukotka. 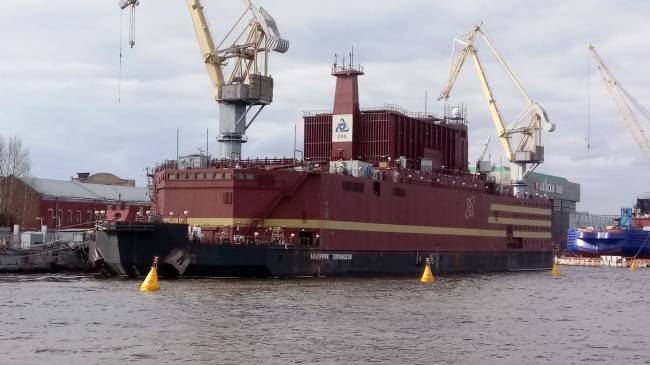 Currently, the floating unit is in the final stages of construction. General technical readiness is about 96%. All the main mechanisms and equipment are mounted on the vessel. Planned completion date - 30 November 2017 year
- said Vladimirov.

Since July, 2016, the mooring trials of the floating power unit have been in progress. The customer for the construction of the concern Rosenergoatom (the electric power division of the state corporation Rosatom) plans to put it into operation in Chukotka in December 2019 of the year.
After commissioning to the customer and before the start of operation, the floating nuclear power unit will probably be in the temporary parking mode on the territory of the enterprise of the state corporation Rosatom of the FSUE Atomflot in the Murmansk region, Deputy Director General of Rosenergoatom Pavel Ipatov said.

We plan that the power unit will go away from the walls of the Baltic plant in May-June 2018. Until July 2019, when the coastal infrastructure in the port of Pevek will be ready, the block will be in the temporary parking mode
- said Ipatov. This is the same regular mode as the construction, operation or repair of the unit, he explained.