The fate of the general

July 14 2017
13
Exactly 120 years ago, 15 July 1897 (new style), in Buturlinovka (today - a city in the Voronezh region) was born the future Soviet military leader, member of the First World, Civil and World War II, Guards, Lieutenant General, Hero of the Soviet Union ( 1945 year) Vladimir Viktorovich Kryukov. Kryukov was one of the closest associates of the famous Soviet marshal Georgy Konstantinovich Zhukov, and the wife of Vladimir Kryukov was Honored Artist of RSFRS Lydia Ruslanova, whom he met at the front in 1942 year. At the end of World War II, Vladimir Kryukova commanded the 2 Guards of the Pomeranian Red Banner Order of Suvorov of the 2 degree, commanding the cavalry corps.


Vladimir Viktorovich Kryukov was born on July 15 of the year 1897 in the Buturlinovka suburb of the Bobrovsky district of the Voronezh province (since 1917, Buturlinovka has the status of a city) in the family of an employee, who is Russian by nationality. His father, Viktor Andreevich, was from a simple peasant family in the village of Klepovka. In Buturlinovka, where he moved to a permanent place of residence, he initially worked as a regular postman, then as a telegraph operator, he was a minor postmaster of the 6th category. Little Vladimir liked his father's uniform with shiny buttons. When he grew up, he dreamed of wearing the same, but fate decreed that he really began to wear a uniform, but already military.

In 1914, the future general successfully graduated from a real school in Ryazan. In the same year, the First World War began. Very soon the country needed a large number of junior officers, so Vladimir Kryukov found himself in Moscow, where he entered the school of ensigns. He finished it in the second half of 1915, then went to the Western Front, where he fought from September 1915. Here he was first the platoon commander of the 26 Siberian Rifle Regiment, and then the chief of the cavalry reconnaissance of the 57 Siberian Rifle Regiment. At the front, his best qualities were revealed: courage, courage, resourcefulness and literacy. He managed to rise to the rank of lieutenant, and for military distinctions he was awarded the Cross of St. George. 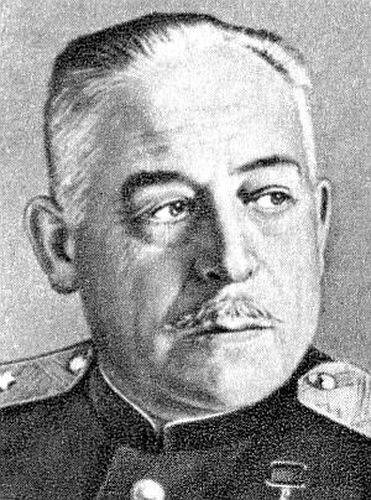 In December 1917, Vladimir Kryukov was demobilized from the army. From the army, he returned to Ryazan, where he soon joined the Red Guard detachment, from June 1918, he was the deputy of this detachment, and later commanded a hundred in it. As part of this squad, he took part in the battles on the Don and on the Southern Front. From October 1918, the composition of the Red Army. He served as adjutant of the headquarters of the Red Guard detachment in Baku, from December of the same year - the commander of a platoon of a separate cavalry division of the 2 Infantry Division. Since September, 1919 - Squadron Commander, Head of the Economic Team, Assistant Chief of Staff of the Separate Cavalry Brigade in the 38 Rifle Division. These are only small stages of his journey during the years of the civil war in Russia.

During the civil war, he fought on the Southern and Eastern Fronts, and in different years he managed to command a platoon, squadron and regiment. During the battles with the White Guards, he was wounded several times, but always returned to the front to his comrades. From August 1921 to 1922, he was the assistant commander of the 82 Cavalry Regiment of the 14 Cavalry Division. In 1922, he returned to civilian life and continued to receive military education, since he could no longer part with military service and hoped to devote his whole life to it.

In 1924, he successfully completed his studies in the department of senior officers at the Higher Cavalry School of the Red Army in Leningrad. After completing the training, his service was connected with various cavalry units of the Red Army. In 1932, he graduated from the 1 course of the Military Academy named after MV Frunze. From June 1933 was the commander of the 20 th Salsk Red Banner Cavalry Regiment of the 4 Cavalry Division. This division from 26 March 1933 of the year to July 1937 was commanded by Georgy Zhukov. Since October 1937, Vladimir Kryukov in Novocherkassk taught tactics at the Red Banner Cavalry advanced training courses for the Red Army commanders. 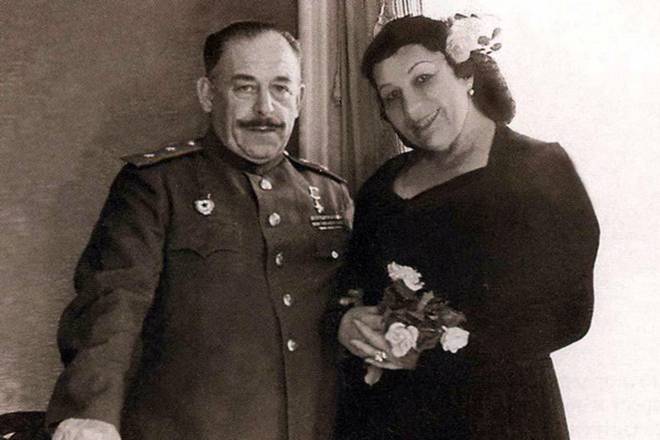 Vladimir Kryukov managed to take part in the Soviet-Finnish war, he fought from February 1940, being the commander of the 306 th rifle regiment of the 62 th rifle division. After the war ended in May, 1940 commanded the 8 th rifle brigade of the Leningrad Military District, located on the Hanko Peninsula. By decree of the Council of People's Commissars of the USSR on June 4 of 1940, Vladimir Viktorovich was given the rank of Major General, it is in this rank that he will meet the Great Patriotic War.

11 March 1941 of the year Kryukov led the newly formed 198 motorized division, which was created in Strelna based on the 7 motorized rifle brigade and was part of the 10 mechanized corps. As part of the current army, this division was up to 17 September 1941, on this day the unit was reformed into the 198 Infantry Division. The division fought with the Finns on the Karelian Isthmus northeast of Vyborg. Vladimir Kryukov headed this unit until its re-formation, after which he took command of the 198 Infantry Division. From September 1941, his division as part of the 54 Army took part in the very first attempts to lift the blockade of Leningrad on the Kolpino direction, and then took part in the Tikhvin defensive and Tikhvin offensive operations. He commanded this connection until 25 December 1941 of the year.

In the same 1941, Vladimir Viktorovich joined the VKP (b). It is worth noting that he joined the party rather late, given the fact that he had fought in units of the Red Army since the 1918 year. At the same time, the absence of a party card did not prevent him from building a successful military career all these years.

From 12 January to 3 February 1942, Vladimir Kryukov commanded the 10 Cavalry Corps on the Western Front. From 6 in March of the same year, he took command of the 2 Guards Cavalry Corps, which had been commanded by the legendary Soviet general Lev Dovator before his death. In April, 1942, in Spas-Nudela near Volokolamsk, he met the already well-known singer Lydia Ruslanova, who performed concerts at the 2 Guards Cavalry Corps, soon after that they got married. By that time, Kryukov had already been married once, his wife died back in 1940, leaving him a five-year-old daughter. In the second marriage, they had another daughter, Lydia Ruslanova, Margarita Kryukova.

In November 1942, his corps took part in the operation "Mars" as part of the troops of the Western Front, however, without even having time to come into contact with the enemy, it suffered heavy losses from artillery fire and German raids aviation. From February to March 1943, Kryukov’s corps formed the basis of the “horse-ski-rifle group,” which, breaking through the front line, penetrated deeply enough into German defense during the Sevsk operation. However, the corps was soon surrounded and with great losses retreated to Sevsk, which it defended for 6 days, having lost almost all its personnel. During the most difficult battles and defense of the city, more than 15 thousand cavalrymen and skiers from the three Siberian ski teams were killed, which were given to the corps as a reinforcement. After these battles, in March 1943, the 2nd Guards Corps was withdrawn from the front for reformation.

July 20, 1944, by order of the commander of the 1st Belorussian Front, Vladimir Viktorovich was to lead the horse-mechanized group of the front (11th tank and the 2nd Guards Cavalry Corps), who received orders to force the Western Bug River and cross the Soviet-Polish state border. In the future, Lieutenant General Kryukov led the 2nd Guards Corps during the Vistula-Oder and East Pomeranian operations of the Soviet troops. During the Wisło-Oder operation, his corps crossed the Pilica River, playing a decisive role in the liberation of Warsaw and other Polish cities from Nazi troops. In the East Pomeranian operation, Kryukov’s corps, in collaboration with tank units, managed to take control of the Polish city of Poltsin on March 5, 1945. During the period when Kryukov commanded the 2nd Guards Cavalry Corps, the corps was awarded the Order of the Red Banner, the Order of Suvorov II degree, and was also awarded the honorary title "Pomeranian".

6 April 1945 of the year on the basis of the Decree of the Presidium of the Supreme Soviet of the USSR for the skilful leadership of corps units and the courage and bravery shown to Lt. Gen. Vladimir Kryukov was awarded the title of Hero of the Soviet Union with the award of the Gold Star medal and the Order of Lenin. After the end of the Great Patriotic War, Vladimir Viktorovich continued to carry military service, from December 1945, he was at the disposal of the Commander of the Land Forces. From May 1946 of the year - he was the head of the Higher Officer Cavalry School named after S. M. Budenny, from October 1947 of the year - Deputy Commander of the 36 Infantry Corps.

According to the memoirs of Kryukov's daughter, the father and mother were quite a bright couple. Mom knew how to apply herself correctly, she made all the impression of a stately, tall, regal woman. At the same time, there was always a real male element in the father. Kryukov’s house was always full of guests. Mom often came up with charades, was a great storyteller, organized jokes, and the cakes were excellent.

This idyll of post-war family life collapsed on September 18 1948, when Vladimir Viktorovich was arrested in Moscow on the so-called “Trophy Case”. After another 10 days in Kazan, his wife Lydia Ruslanova was also arrested. Officially, Vladimir Kryukov was charged with robbery and misappropriation of trophy property on a large scale, namely, that at the end of the war he brought pictures, furniture and precious jewelry to Moscow. 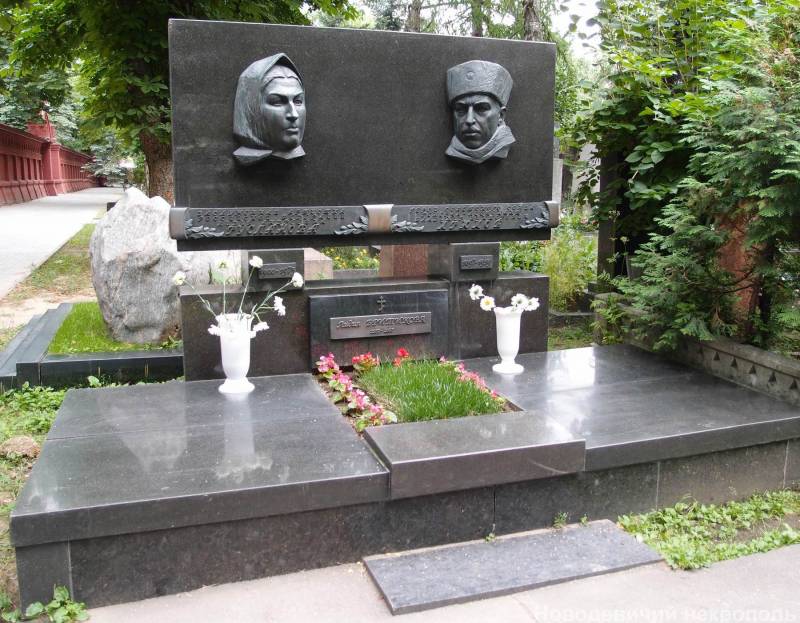 2 November 1951, Vladimir Kryukov was convicted by the Military Collegium of the USSR Supreme Court, he was sentenced to imprisonment for 25 years in a forced labor camp, with a loss of rights to 5 years, and confiscation of all property and deprivation of government awards. Kryukov served his sentence in Kraslag, from where he was released in July 1953 on the basis of rehabilitation by the Military Collegium of the USSR Supreme Court. In the same year in August, he was reinstated in the military rank of Lieutenant-General, in all rights and state awards. It is worth noting that Vladimir Viktorovich was still lucky, because in August 1950, according to Trophy or as he was called the “general's case”, were shot by Colonel General Vasily Gordov, Lieutenant General Grigory Kulik and Major General Philip Rybalchenko.

After being released from the Kryukov camp, he was treated for some time, after which in November 1953 was sent to study. In 1954, he graduated from the Higher Academic Courses at the Higher Military Academy named after KE Voroshilov (today the Military Academy of the General Staff). From March 1955, he served as deputy chief of the Military Law Academy for tactical and drill training. From December 1956 was at the disposal of the Main Personnel Directorate of the Ministry of Defense of the Soviet Union. From April 1957, Lieutenant-General Vladimir Viktorovich Kryukov was retired. The last years of his life he spent in Moscow. 16 General August 1959 died at the age of just 62 years. He was buried in the capital at the Novodevichy cemetery.