July 14 2017
14
On Thursday, the German media group Funke published in its publications an interview with French President Emmanuel Macron. World media have paid attention to him, primarily because of Macron’s criticism of Germany’s position, which, according to the French president, “benefits from imbalances in the eurozone.” Under current conditions, Macron explained his thought, competitive eurozone states (primarily Germany) are only strengthening their positions, and “countries that already have a high level of public debt are gaining even more obligations ... and this fork is becoming more and more.” 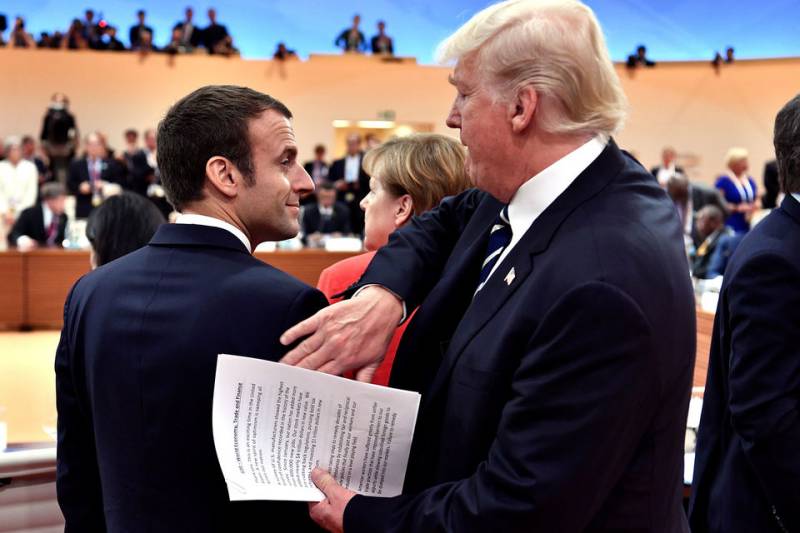 In the "fork" of different interests

It must be said that the revelation of Emmanuel Macron did not become a new discovery for world economists and politicians. Lately, only lazy people have not spoken and written about the troubles in the eurozone economy. The existing imbalances forced the leaders of Europe in March at the jubilee EU summit in Rome to put forward the concept of "multi-speed Europe" as the basic and official for the continuation of European integration.

On the eve of that summit, Macron’s predecessor as French President Francois Hollande frightened his doubting colleagues: “The European Union, which includes the 27 countries, can no longer be homogeneous. For a long time, the idea of ​​a differentiated Europe with different speeds and a clear pace for progress caused a lot of resistance. But today such an idea is necessary. Otherwise, Europe will explode. ”

So Hollande supported German Chancellor Angela Merkel with her idea of ​​“Europe of two speeds”. The idea categorically does not like the Young Europeans of the new call. They have already become accustomed to the political and financial support of Old Europe. The basis of this support and the locomotive of the European Union, everyone considered Germany.

In the course of time, politicians began to walk around with the opinion that Berlin was tired of pulling on its neighbors, and he needed to dig up a strong man, turning on the “first speed”, to ensure further integration of the eurozone countries. No one dared to accuse Germany of deriving benefit from its economic and political domination in the European Union. Macron did it first.

The rightness of the French president is shared by many experts who have not yet been heard in Europe. But their voice gradually erupts. Last Wednesday, for example, the Munich newspaper Suddeutsche Zeitung pleased its readers with the message that during the crisis in Greece, Germany earned 1,34 billion euros in providing Athens with loans and buying Greek bonds.

The response of the German Ministry of Finance to the corresponding request of the Green faction in the Bundestag fell into the hands of journalists. The Ministry of Finance has explained to the ever-green German parliamentarians that since 2015, the share of the profits of Germany from the repurchase of Greek bonds in the framework of a special program of the European Central Bank amounted to 952 million euros. Berlin also received 393 million euros as interest on a loan issued to Greece by the German state bank Kreditanstalt für Wiederaufbau.

Where did Athens take the funds to settle with Germany? This question is not a big secret for anyone - in the European Stability Mechanism. In early July, the ESM board of directors allocated to Athens the next tranche of loans in the amount of 8,5 billion euros under the current assistance program.

Payment in the amount of 7,7 billion euros was not long in coming. This is how these funds were distributed. Last Monday, 6,9 billion euros were sent by Greece to service the debt (that is, creditors - including Germany). Another 800 million euros went to the same address for the repayment of overdue debts. Thus, the debt of the Greeks rose to 7,7 billion euros. The same amount was added to the purse of creditors. The fork Macro was talking about has become even bigger.

The German “greens”, having familiarized themselves with the answer of the Ministry of Finance to their inquiry, called the behavior of the German government “immoral”. “The fact that Germany makes money from the crisis in Greece may be legal. But in a moral sense of solidarity, this is illegitimate, ”said Sven-Christian Kindler, an expert of“ green ”on budget issues, told Deutsche Welle.

He called on the German government to return the money earned on it to Greece. The call is as populist as it is meaningless. There are many more debtors in the eurozone than creditor countries. All of them fulfill their debts, multiplying new ones, following the same scheme of work with ESM as Athens.

France, in general, is among the beneficiaries of credit policy holders in the eurozone. Moreover, a week ago in Hamburg on G-20 Emmanuel Macron quite sincerely kissed the summit host Angela Merkel. The Frenchman openly demonstrated the unity of European leaders in front of new challenges and strategic goals. After all this, Macron suddenly performed such an unexpected political pirouette.

Attentive observers explain the change in his French president’s Hamburg contacts with US President Donald Trump. In front of a guest from overseas, Macron showed not only the respectfulness of a faithful ally, but also the subservience of a dependent partner who was ready to serve and help without any conditions.

This was manifested, for example, during general photography, when Angela Merkel pushed Donald Trump to the periphery of the summit. Resourceful Macron, as they say, covered the American with himself - he took the last place in the row, disavowing Trump’s isolation by European politicians.

In less than two months of his term as President of France, Emmanuel Macron has already managed to meet several times and talk on the phone with Donald Trump. The press releases of these meetings mark the coincidence of the positions of both politicians on virtually all the issues discussed and readiness for fruitful cooperation, including on the European agenda of the Americans.

She under Trump has changed dramatically and even led to a marked cooling of relations between the United States and Germany. There are several reasons for this - the contradictions in industrial and financial policies, in the views on global trade. However, the main focus of Washington’s plans is to contain the Germanization of Europe.

This is almost openly spoken by representatives of the new American administration. And not only they. Trump's recent visit to Warsaw sparked regional ambitions for Polish politicians. The Poles felt the potency of a center of power capable of suppressing Germany from the East. Emmanuel Macron decided to disturb Berlin from the West.

It looks like he has several goals. Firstly, to play along with Donald Trump in his pressure on Germany, and, secondly, with the help of the Americans to gain a foothold in Europe. Macron has big plans here. Criticizing Germany, the French president set out his vision for the eurozone. It is very different from today's realities.

“We need the eurozone with a common budget, a government that allocates budget funds, and democratic control mechanisms that are not available today,” said Macron in an interview with the German media group. Great novelty in this proposal, the French either. "United States of Europe" from time to time many politicians of the continent dream, but few of them are ready to lead this process.

It needs the support of influential world forces. At Macron, as shown by the elections in France, it is. And this, of course, heats up the ambitions of the French president, makes in his perception it is real to ride that “slide in Europe” with the government, the budget and other attributes of power, which Emmanuel Macron himself is now so carefully publicly drawing.

His plans are in doubt. Because such radical ideas are not supported by the government of Angela Merkel. Last year, Germany achieved a record surplus of its trade balance of € 250 billion. France, on the other hand, has a deep minus in this position - about € 50 billion in its trade deficit. So, it is impossible to compare with real possibilities, and not with the scale of the stated ideas, in Macron.

That is why the French president is leaning toward the powerful shoulder of his American colleague, counting on his help and support. Only here the signals from Washington show that the Trump administration has no interest in a strong and united Europe. But as a counterweight to the Angela Merkel Macron, the Americans are quite satisfied. Whether the President of France agrees with the role assigned to him will be seen in the near future.