"Work, brothers." On the anniversary of the death of Hero of Russia Magomed Nurbagandov 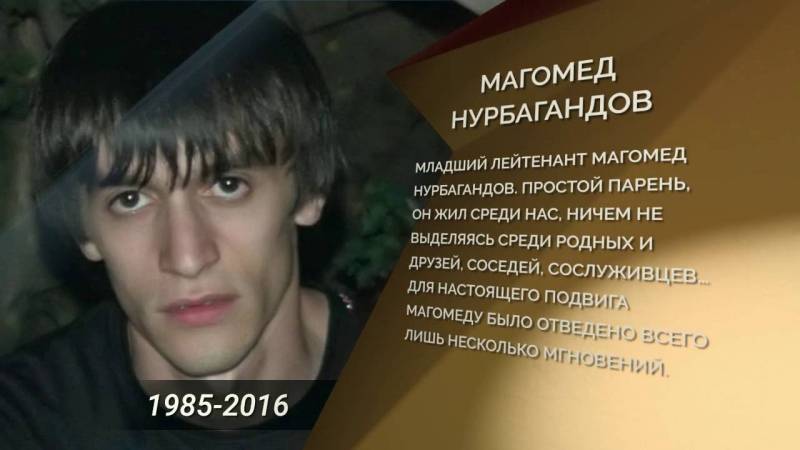 «Work brothers", - such simple, plain, but - at the same time - such necessary words. They can be safely addressed to all who perform their duty - military or civil, in the homeland or at its distant frontiers. And they sound particularly shrill, if you remember the conditions in which they were spoken.

10 July was one year since the death of the Hero of Russia, police lieutenant, 31-year-old Magomed Nurbagandov, who said these simple words, which are now the motto of many people.

Yes, and began this история quite simply: 9 July 2016, a large group of relatives, had a picnic in the woods, not far from the usual Dagestan village Sergokala. No one thought of something tragic or heroic, no one could assume that two people would never return home.

In the evening, almost all the campers went home. In the forest remained cousins ​​Magomed and Abdurashid and another (according to various sources) two or three minor boys. By the morning of July 10, they were attacked by gangsters carrying the extremist ideology of the Islamic State (ISIL, an organization banned in the Russian Federation). From the point of view of these militants, people peacefully resting in the forest are, by definition, “kafirs” (“infidels”). Then it turned out that at least one of these terrorists had previously tried to flee to Syria, but was stopped. I decided to continue my criminal activities in Russia.

After the uninvited guests began to beat one of the boys, Abdurashid stood up for him. He died first. "The most borzoi turned out"- so commented on the attackers of his behavior. According to ISIL traditions, they filmed everything that happened.

Putting the hostages face down, the militants began a search in the car of their victims. And they found the certificate of the private security officer belonging to Magomed. This predetermined his tragic fate. Magomed, together with one of the brothers, was tied up and stuffed into the trunk of a car - the very one who was searched. Brought to some distance from the camp. There was a massacre.

Subsequently, the terrorists cut the video of their atrocities. They laid out the movie of the murder, supplied it with ISIL symbolism and threats that it would be so with everyone, but tried to hide the fact that Magomed, who was shot by them, had a choice: to bow his head or die. That is, he died not as a victim, but as a hero.

The terrorists demanded that Nurbagandov, on the camera, urged his colleagues to stop working in law enforcement. In response to this the opposite was heard: the very words "Work, brothers."

Courage is of a different kind. And not everyone, even of those who do not bow to the bullets on the battlefield, is able to maintain courage in those conditions when left alone with death. If in battle a bullet can hurt, and maybe not hurt, then one can wait for mercy from the scum only at the cost of a bowed head and complete submission. In addition, it is not known how the bandits will behave - they will shoot them right away or decide to turn the last minutes of life into hell ...

And far from always the heroic deed is performed “beautifully”, “in the world”, where, as they say, “death is red”. It happens that people may not even hear about such feats.

Here and in this case, the great courage of a simple police lieutenant, a native of a small Dagestan village, no one could know. But thanks to sheer chance, the country saw that there, in the forest, the young policeman fell not only as a victim of gangster reprisals, but as a person who remained true to his duty to the end.

21 September 2016 President Vladimir Putin signed a decree awarding Magomed Nurbagandov a Hero star. Having met his parents, the head of state said: “He is a hero, because not everyone is under the threat of death, the execution remains loyal to the oath and duty, remains loyal to his people».

Abdurashid, who died on the same morning, was posthumously awarded the Order of Courage. Miraculously managed to survive his younger brother Magomed, who along with him was in the clutches of the bandits. The militants released him with the words: “We will leave you alive so that you will call on everyone to leave the work in the police, otherwise it will be so with each».

However, the villagers were not afraid. Moreover, when it became known under what circumstances Magomed died, they took to the streets and called on the authorities to perpetuate the name of the Hero in the names of the streets and schools.

A year has passed. In the small homeland of Magomed Nurbagandov, in Sergokal, memorable events were held in his honor. In honor of the courageous policeman make poems and songs. “Work, brothers! We work, brother! "