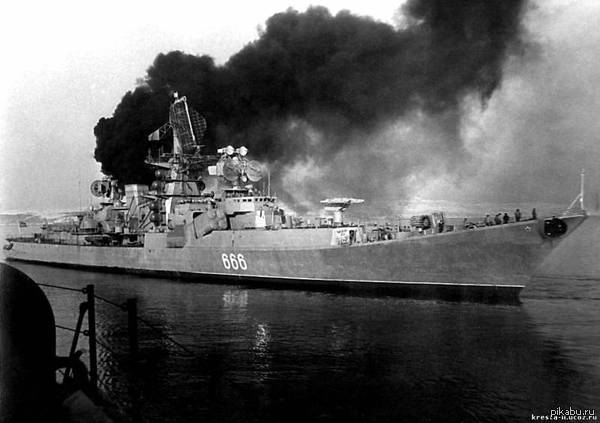 An increase in the power of the anti-submarine defense of the Soviet Navy was required due to the growing threat of a nuclear missile strike from submarines of a potential enemy. Anti-submarine defense became one of the main tasks of the USSR Navy, which was to search for and destroy nuclear submarines of a potential enemy. It goes without saying that the United States of America was considered the likely adversary then, perhaps the only country in the world whose military potential was then comparable to the Soviet one. 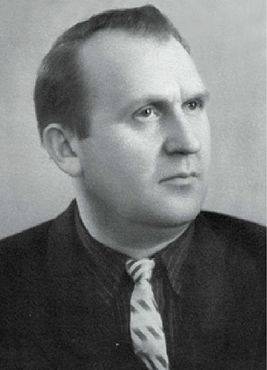 The new project was named 1134-A "Bercut-A" and was developed in 1964-1965. in the northern PKB under the direction of the chief engineer of the design bureau, Vasily Fedorovich Anikiev, who was subsequently awarded the highest state award - the title of Hero of Socialist Labor (1984).

Ships built in accordance with this project were to track and destroy enemy nuclear submarines around the world, as well as provide support to tactical groups of the navy, anti-submarine, anti-ship and anti-aircraft defense of ships, ships, connections during sea crossings. At that time, given the great mobility of the Soviet navy, this seemed a very important task.

It is worth noting that the ships of this series were well armed, since they were tasked with suppressing surface, underwater, air targets, as well as the resistance of coastal artillery batteries. Large anti-submarine ships were equipped with anti-aircraft, anti-submarine, artillery and aviation weapons. The anti-aircraft weapons of the BOD included the M-11 Storm universal anti-aircraft missile system. At the same time, the anti-aircraft missile launchers were located in the diametrical plane of the ship - 1 in the bow and 1 in the stern. The launcher was a twin stabilized installation of the pedestal type with the lower suspension of missiles on the guide beams. A volley of air defense systems - 2 missiles, in both launchers - 4 missiles, and the firing interval was 50 seconds. The ammunition included 48 anti-aircraft guided missiles (SAM) V-611. Later, anti-aircraft weapons of the ship were modernized by improving the complex "Storm-M" and "Storm-N" in 1972 and 1980. respectively.

The artillery armament of the ship was represented by two X-NUMX-mm two-gun automatic AU AK-57 turret-type and 725 Bars MP-2 firing control systems. In the event of hostilities, the main-caliber artillery of the ship was to fire at air targets, small-sized naval targets, destroy the floating mines, the enemy's manpower, and also suppress the resistance of enemy fire facilities on the coast. Ammunition AU was designed for 103 shots.

On ships 1134-A was also installed a complex of small-caliber anti-aircraft artillery. It consisted of 2 batteries 30-mm six-barreled automated artillery installations AK-630 as part of four machine guns. Each six-barreled rifle had 2000 rounds of ammunition. The system used to control the shooting radar MP-123 "Vympel-A". The maximum firing range of the complex was 8100 meters, and in height - 5000 meters. 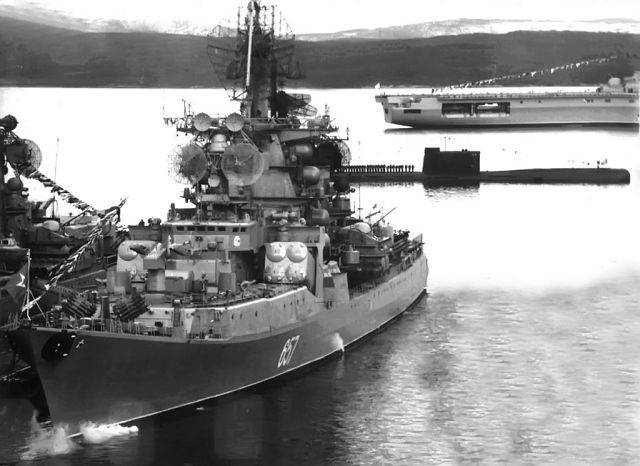 Since the ship was anti-submarine, special attention was paid to its equipment with anti-submarine weapons. First, the ships were guided by a second-generation anti-submarine missile system URPK-3 "Metel" (adopted for use in 1973 year). It consisted of four-2 nenavodyaschiesya fixed deck launchers CT-M-1134A or CT-100 with ammunition in 8 controlled rocket anti-torpedo 85R caliber 533 mm rocket flight range from 6 55 km and up stroke range homing torpedo AT- 2U 8 km. The shooting interval was six minutes. But the re-charge of the installation could only be on a naval base - using a floating crane. But the anti-submarine complex could be used at any speed, although a wind speed of no more than 20 m / s was required. In addition, a jet-bomb complex was installed on the ship. weapons. It was intended to destroy both enemy submarines and torpedoes fired by the enemy. The complex included 2 nasal twelve-barrel launchers RBU-6000 "Smerch-2" and 2 aft six-barrel launchers RBU-1000 "Smerch-3". The ammunition consisted of 144 212-mm 119,5-kg RGB-60 jet bombs, the ammunition for RBU-1000 included 60 300-mm 196-kg RGB-10 jet bombs.

The ship also had torpedo weapons designed for use against enemy submarines in the nearest defense zone, i.e. - At a distance of 6-8 kilometers. The ship’s torpedo armament consisted of two five-tube torpedo tubes, PTA-53-1134B, which were installed airborne on the forecastle deck. The total ammunition was 10 torpedoes 53-65K and SET-65.

С17 June to 8 December 1974, BOD Admiral Makarov was located in the Central Atlantic and the Mediterranean Sea - as part of a squad of Soviet warships, which included BOD Admiral Nakhimov, EM Byvaly and military tanker Dnestr. Just at the time when the ships of the USSR Navy were on the march, the famous Cyprus crisis arose. 15 July 1974 in Cyprus there was a military coup, as a result of which President Archbishop Makarios III was overthrown. The coup was organized by EOKA-B - the “National Organization for the Liberation of Cyprus”, which appointed the Greek nationalist Nikos Sampson to the post of head of state. Behind EOKA-B, the so-called Greek leaders were in power. "Black colonels", also adhered to the ideas of Greek nationalism. In response, Turkey, considering the coming to power on the island of nationalists as a direct threat to the security of the Turkish population of Northern Cyprus, landed on the island 35-thousandth army corps. 37% of the Cypriot territory was under the control of Turkish troops, first of all - areas of the island inhabited by ethnic Turks. Greece and Turkey, the two most important members of NATO in the Mediterranean, are on the verge of an open armed conflict.

Soviet ships BOD "Admiral Nakhimov" and BOD "Admiral Makarov" were sent to the area of ​​Cyprus. They were assigned the task of ensuring the security of Soviet citizens on the island, first of all - the staff of diplomatic missions and trade missions. Then the ships escorted the ship "Bashkiria", on which citizens of the Soviet Union and members of their families were evacuated from the island of Cyprus. During the “Cypriot operation”, the Soviet warships did not engage in any confrontational action with foreign naval forces. 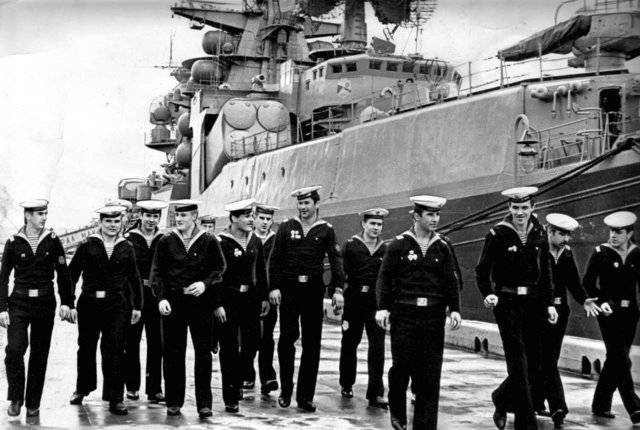 Soviet large anti-submarine ships also did not forget about their main function — the observation of the submarines of a potential enemy, primarily the US Navy. In addition to submarines, the BOD Admiral Makarov also observed surface ships of a potential enemy. For example, while in the Atlantic Ocean, the BOD Admiral Makarov found the American aircraft carrier Forrestal that was following without protection. He almost collided with the Soviet ship, then turned and began to leave, picking up speed. The command of the BOD "Admiral Makarov", having contacted the command of the Soviet Navy, received an order to monitor the American aircraft carrier. Although there was not a single warship of any of the NATO countries at this time close to a Soviet ship, it was very difficult to spy on an aircraft carrier because of the constantly launched civilian ships. However, Admiral Makarov’s BOD confidently pursued an American aircraft carrier within visual sight, until an order was received in the Biscay Bay area to stop the pursuit. This история - A typical example of the everyday life of a large anti-submarine ship.

"Admiral Makarov" served in the Soviet Navy for over twenty years. Of course, it could serve even more if modernization works were carried out on time. But the historical era has made its own adjustments to the fate of the country's navy and the large anti-submarine ship Admiral Makarov. In 1992, the ship was expelled from the Northern Fleet of the Russian Navy. It was a time of strange liberal hopes for peace and friendship with the United States of America, at the state level the need to reduce armed forces, to give up arms was promoted. In practice, the country's navy was rapidly collapsing, and the then leadership practically took no action to preserve the Russian naval power.

In the 1994 year, two years after the "write-off" of "Admiral Makarov," the famous Soviet warship was sold to India for scrap. So sadly ended the fate of the ship, which served the service of a generation of Soviet officers, midshipmen, foremen and sailors. Twenty-three years later, the ship "Admiral Makarov" ceased its physical existence. However, 2 September 2015 was launched a new ship under the same name - the frigate, the patrol ship of the 11356 project "Admiral Makarov". He entered the service in the Black Sea Fleet of the Russian Navy and should become a worthy successor to the Russian and Soviet ships, bearing the glorious name of Admiral Makarov.