July 12 2017
26
Iraqi Prime Minister al-Abadi congratulated the troops on the liberation of Mosul. The battles involved Iraqis, Kurds, Shiite militias, Arab Sunni troops. Air support provided aviation US-led coalitions. In addition, the Iraqi command was advised by US military advisers. According to experts, the defeat of militants in Mosul and the surrounding area should be recognized as a victory for D. Trump. 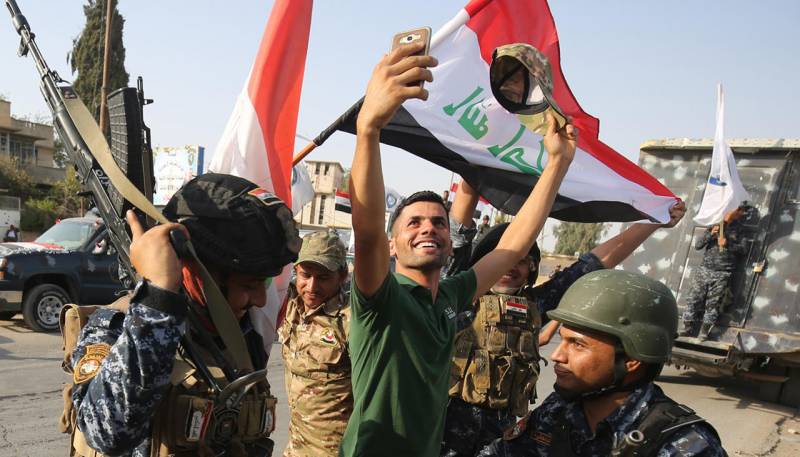 Analysis of the long war with the “Islamic State” (prohibited in the Russian Federation), entrenched in the Iraqi city of Mosul, allows us to identify several main stages of confrontation with terrorists and make assumptions about the future of the fight against militants in the region.

Iraqi Prime Minister Haider Al-Abadi congratulated the troops on the liberation of Mosul from the militants of the extremist Islamic State group. "The commander-in-chief of the armed forces, Haider Al-Abadi, arrived in the liberated city of Mosul and congratulated the heroic fighters and the Iraqi people on a great victory," the official representative’s spokesman said. "BBC".

The militants had been in command in Mosul long ago: the city was captured in the summer of 2014, and made the “second capital” of the so-called caliphate. The Iraqi army, militia and coalition forces entered the confrontation with terrorists in October last year.

2. The price of victory.

Back in 2016, experts predicted the victory of the army and coalition, which will be achieved in a bloody hard struggle. And so it happened: the militants of the IG desperately resisted, and the Iraqi troops suffered serious losses. In addition, a huge number of civilians died. About a million citizens left their homes.

In Mosul, not only houses were destroyed, but also historical building. A significant part of the city is turned into ruins. There are two reasons for the total destruction: 1) for nine months the city was subjected to air raids and bombing by coalition forces; 2) the Islamists themselves previously destroyed a number of historical buildings, including a museum with exhibits of ancient history and the Al-Nuri mosque. However, terrorists deny the destruction of the mosque and point to the American coalition.

There is nothing to breathe on the streets of Mosul, there is no water and electricity in the city. The UN is talking about a humanitarian crisis. United Nations experts estimated the base city recovery in 700 million dollars (also known in the estimate in 1 billion dollars).

“We need to remember that, both in the Mosul region and in other parts of the country, there are vast territories that were literally devastated during this conflict,” the TV channel said "Euronews" a resident of Melanie Markham. “So, if we talk about restoration, we need funds not only for Mosul, but also for all the surrounding areas, there are villages where tens, hundreds, thousands of people lived before, and now they are completely empty.”

3. Violations in the field of humanitarian rights.

The human rights organization Amnesty International believes that the Iraqi army and its coalition allies led by the United States violated international humanitarian law. Moreover, some of the violations can be equated to war crimes.

The report by Amnesty International, which quotes radio "Freedom"It also speaks of violations of humanitarian law by field commanders of the Islamic State. One of these violations, experts considered the use of civilians as human shields.

4. In Iraqi land is a holiday.

Despite the destruction and the difficult humanitarian situation, many residents of the city celebrate the victory and the liberation of the city from the domination of terrorists. Rejoice residents of all of Iraq.

According to Sana Ibrahim, a resident of Basra, “all honest people celebrate victory. If God helps us, we will get rid of not only the militants of the IG, but also those corrupt politicians who helped create the group. We took Mosul. And we will destroy the "IG".

Mahmoud Ahmed, a resident of Baghdad, told the correspondent "Euronews": “See for yourself how happy people are. We pray to Almighty Allah so that peace, tranquility and security will finally prevail in our land. We have suffered a lot in recent years, we hope that the residents of Mosul who returned to their homes sooner or later will get better. ”

Nonetheless, it’s too early to talk about a complete victory over IG in Iraq. Rather, we should talk about the loss of part of the territory of the militants. Many analysts, both Russian and foreign, believe that even after the likely release of the “first capital” of IG, the Syrian Raqqa, the war on terrorists will not end. After the territorial split of the “caliphate” with the “state” of the Islamists, it will probably be over, but this does not at all mean that the “IS” will cease its bloody activities. Many militants under the guise of refugees have already successfully moved to Europe, where they organize terrorist attacks, frightening the government and the population. After the defeat in Iraq and Syria, IG can become something like an expanded version of Al-Qaida (banned in the Russian Federation) —a network structure leading an underground war against the infidels around the world. The effectiveness of the actions of the special services against such structures, especially lone militants recruited by radicals and brought up on Islamist propaganda, is not high enough.

Militants actively “broadcast” on the Internet using their “media” and social networks.

According to a study by George Washington University and the International Center to Counter Terrorism, the Islamic State militants have launched fifty-one attacks in Europe and North America since June 2014. Sixty-five radicals participated in the attacks. Of these, a smaller part received combat experience in Iraq and Syria - only twelve people.

There is no doubt that terrorists will use the global information space to recruit and train potential supporters in the future.

The terrorists still hold the town of Tal-Afar to the west of Mosul, the city of Ana, part of the Rutba districts and the border crossing Kaim in Anbar, part of the western province of Rutba, the city of Khavija, and also around 500 villages in Kirkuk. Kurdish Pesmerga commanders reported Gazeta.Ruthat the operation for the liberation of Mosul should have preceded the release of Haviji. According to the representative of the Peshmerga, Major Sartip Othman, the Iraqi command rejected the offensive.

Now, according to representatives of the Peshmerga, after Mosul, the authorities intend to launch operations against IG in Tal Afar and in Anbar province. Havija will be next. Representatives of the international coalition made it clear to the Kurds that Havija is not the primary goal.

The Kurds, however, are convinced that the operation to free Hawiji cannot be postponed: the presence of militants here poses a danger to Kirkuk, the administrative center of the province, and to all of Iraq.

7. There will be no revenge!

In Iraq, there are areas controlled by "IG". Anton Mardasov, head of the Department of Studies of Middle East Conflicts at the Institute of Innovative Development, an expert of the Russian Council on International Affairs, believes that the revenge of the terrorists will not happen.

"About the revenge of" IG "in the short term, there is no question," he said Gazeta.Ru. - Nevertheless, the caliphate has a presence in many provinces, including Baghdad - in the area of ​​the so-called Baghdad belt, and acts of terrorism in the capital are arranged not only by suicide bombers disguised as traffickers, but also by cars filled with explosives that can be avoided numerous checkpoints. The reason: corruption and the use of expensive cars, which often do not check. "

8. Split the state into parts?

Almost 20% of the Iraqi population, the Kurds, are “going out” together with the whole of Northern Iraq. In a few months, there will be a referendum on independence, recalls in the journal "Expert" analyst Gevorg Mirzayan.

By the way, the following 20% of the population can contribute to the division of Iraq - Sunnis who have long been unhappy with the rule of the Shiite majority.

The capture of Mosul is the most important foreign policy victory of Donald Trump, and above all in the image plan, G. Mirzayan believes. “The American president promised to defeat IG - and now he took one of the two capitals of the group,” the analyst recalls.

In addition, the US has strengthened its position in Syria: Trump is not going to leave this country like Obama. We are already talking about creating new American bases. It is very likely that they will appear in Kurdistan and in the Sunni areas of Iraq (in the same Mosul).

In a rather short period of time, Donald Trump did what Barack Obama wrote down to curbing his victories in the squeaky museum. The operation to free Mosul, we recall, was initiated by the previous US administration, but it was fully carried out by the Trump team.

Unlike Barack Obama, the new president expects to increase US influence in the Middle East and significantly weaken Iran’s influence. The military success of the coalition in Mosul, the conclusion of a multibillion-dollar deal with Saudi Arabia, and the obvious course towards overthrowing Assad in Syria, which both the Saudis and other partners of Washington in the region fully endorse, contribute to this. New military bases in Iraq will give the same Iran, an ally of Assad, an unequivocal signal: the Americans are here, and they are not asleep.