July 12 2017
27
Since the end of 2015, Russia has carried out a number of expeditionary operations in Syria, relying on aging military transport aviation and offshore platforms. If it is not possible to correct previous unsuccessful attempts to replace them, the country risks losing the opportunity to conduct such operations over the next ten years, writes Tom Waldwin, an employee of the International Institute for Strategic Studies (IISS), in the article “Russian military lift risks atrophy”. 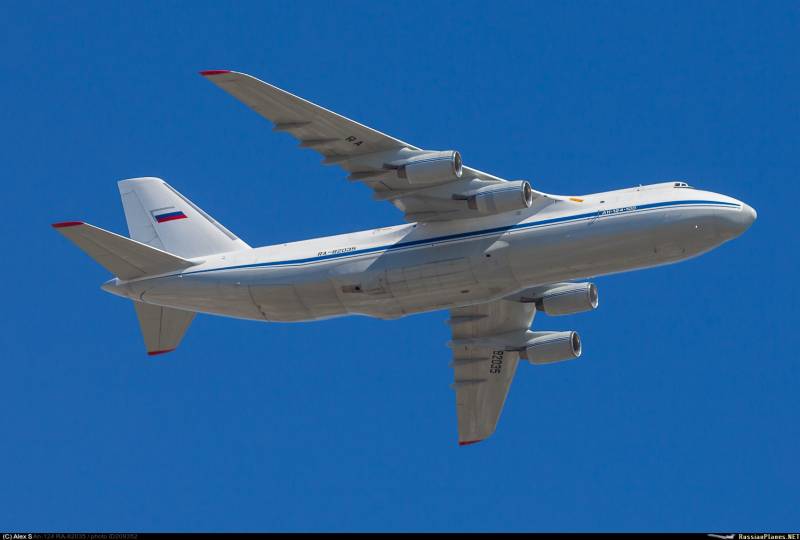 The current Russian military transport equipment is only part of the one that was in service with the Soviet Union at the time of the end of the Cold War (aviation - 1/5, naval - a quarter from fleet early 1990s). Moreover, the Russian Armed Forces rely on aircraft and ships designed and built during the Soviet period, most of which are nearing the end of their service lives. 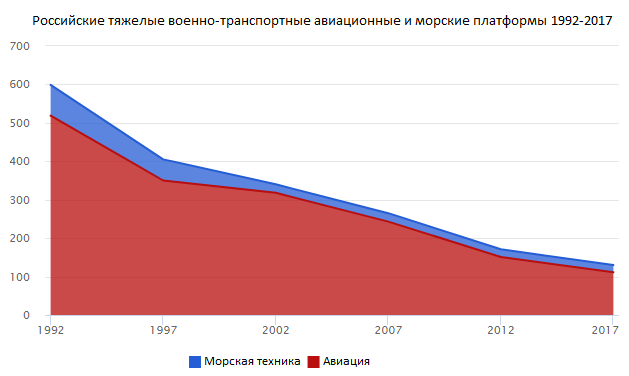 Russian capabilities in the field of heavy air cargo transportation are based on three types of aircraft: An-22 Antey, Il-76 and An-124 Ruslan. An-22 made its first flight in 1965 year, IL-76 - in 1971, An-124 - in 1982. By the end of the Soviet era, projects were being considered to create a new generation of military transport aircraft, but with the collapse of the USSR they were curtailed.

The Antonov aircraft manufacturing enterprise is located in Ukraine, and military-technical cooperation between Moscow and Kiev was abruptly stopped with the annexation of Crimea to Russia in 2014. At the end of 2013, the countries discussed the issue of resuming the production of An-124. Only a small part of the An-22 aircraft remains flightable, with efforts being made to extend their service life to 2020 year.

Much more numerous is the Il-76 aircraft fleet, which serve as the workhorses of the Russian HQs. The aircraft was at the center of the modernization effort, but the results remain modest. From 2002, two IL-76MD aircraft were upgraded to the IL-76MD-90 version, and the original D-30 turbofan engines were replaced by PS-90А. Updates touched and avionics equipment. However, this project is also in a state of uncertainty.

At the end of 2006, Russia decided to transfer the production of IL-76 from Tashkent to the Aviastar plant in Ulyanovsk and began developing a significantly improved version called IL-76MD-90А. This will be a new aircraft, and not just a modernization of the existing design. The first flight tests of the prototype were conducted in September 2012 of the year. The following month, Aviastar received a contract worth 139,4 billion rubles for the construction of the 39 Il-76MD-90А aircraft with a delivery period from 2014 to 2020. As of mid-year 2017, only three of the 39 aircraft were transferred.

At the end of 2012, the Russian Ministry of Defense issued PJSC Aviation Complex. S.V. Ilyushin "contract worth 3,4 billion rubles for the modernization of IL-76MD standard IL-76MD-M. This project included the upgrading of avionics to the level of IL-76MD-90А, but did not imply the replacement of the D-30 engine. The goal was to extend the life of the aircraft by another 15 years. Today, this project is behind schedule.

With a view to the long-term perspective, Moscow has once again begun to consider the possibility of improving its military transport fleet as part of the project "Perspective Aviation Complex of Transport Aviation" (PAK TA). Ilyushin, it seems, has returned to the developments of 1980's and the beginning of 1990's under the IL-106 project, but it is still difficult to judge the pace and progress in this work. The company is also working on the Il-112 light turboprop transport aircraft, as well as the Il-214 turbofan military transport aircraft. The first is intended to replace the An-26, and the second - An-12. 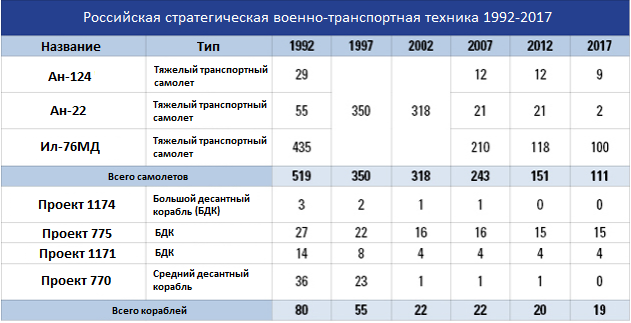 The prospects for Russian naval military transport technology are worse than in the area of ​​strategic military transport aviation. Currently, the Russian amphibious fleet is represented by two types of ships: the four remaining large amphibious ships of the 1171 project, which were put into operation during the period from 1966 to 1975, and also the large amphibious assault ships of the 775 project, which entered service in the 1976-1991 years. Half of these ships are assigned to the Black Sea Fleet. In 2004, the first of the planned new series of ships of the 11711 "Ivan Gren" project was laid. The lead ship, which was scheduled for commissioning in the 2008 year, is currently undergoing sea trials, and the second ship, which is expected to be delivered in the 2018 year, has not yet been launched. At the end of the 1980-ies, the Nevsky PKB developed the universal landing ship of the 11780 project, however, as in the case with the aforementioned IL-106, the matter did not get further.

In 2011, Russia attempted to improve naval military transport equipment by signing an agreement with France to purchase two universal landing craft of the Mistral type. However, the deal was canceled at the end of 2014, due to the French postponement of the order in response to the Russian-Ukrainian conflict.

The first ship of the 11711 project is likely to be commissioned later this year, but in the coming 10-15 years, such a large number of vehicles will need to be replaced, so that the apparent lack of a plan to continue building ships of this class or switching to a new project may lead to loss opportunities in Russia in this area.