As the plan collapsed "Russian Blitzkrieg" in the Balkans 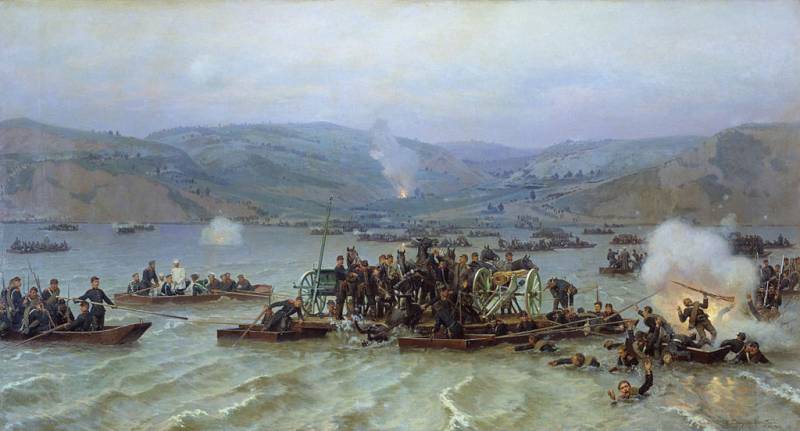 After forcing the Danube, the Russian army could proceed with the implementation of a further task - to develop an offensive in the direction of Constantinople. The immediate tasks of our troops were the expansion of the bridgehead, providing the flanks and reconnaissance of the enemy forces. The problem was that the enemy had concentrated serious forces on the flanks of the Russian army, and there was no strategic reserve to throw a powerful grouping directly to Constantinople, errors of prewar planning, mobilization and deployment of the army affected.


On the way to Constantinople at that time there were only a few thousand Turkish soldiers stationed in Tarnovo. However, on the flanks of the Russian Danube army, the enemy had strong groups: on the right, in the Nikopol area, about 10 thousand people, and on the left, in the Rushchuk, Osman-Bazar, Shumla area - about 60 thousand people. The total number of the Ottoman army at that time reached 74 thousand people. Thus, the Turkish army lost the Danube frontier, but still held a favorable position, covering both flank of the Danube army.

By the evening of July 9, one and a half corps of Russian troops concentrated on the Sistov bridgehead: almost all the infantry of the 8 corps, part of the 13 corps and the 4 rifle brigade. At the same time, on the north bank of the Danube, there were 4,5 Russian corps: 9, 12, part of 13, 11, which had just arrived in Bucharest, was heading for Zimnitsa. The 4 Corps was located in Dobrudja. Total about 14 thousand people. In addition to these corps, which were part of the Danube Army, the 120 and 7 corps provided the Black Sea coast from the mouth of the Danube to the Crimea (they were not part of the Danube army). Thus, for conducting military operations in Bulgaria, the Danube army had six corps with three corps supporting it.

The commander-in-chief of the Danube army decided to first secure the flanks and reconnoitre the enemy’s forces in front of the front, and for this purpose send three units to the south, west and east: Front, West and Ruschuksky. The advanced detachment was formed on June 30 under the command of Lieutenant General I. V. Gurko. The detachment consisted of: a consolidated dragoon brigade (8 th Astrakhan and 9 th Kazan dragoon regiments) under the command of Duke E. M. Leuchtenberg, a consolidated brigade (9 th Kiev Hussars and 30 th Don Cossack Regiment) under the command of the Duke N M. Leuchtenberg, Don Cossack Brigade of Colonel Chernozubov (21 and 26 Regiment), Caucasian Cossack Brigade of Colonel Tutolmina (2 Kuban and Vladikavkaz-Ossetian Regiment), 4-Rifle Brigade, six Charity Corps; G. Stoletov, two hundred Kuban blotters hundred Ural Cossacks. In total, the squad had 4 battalions, 6 squads, 45 hundreds and squadrons with a total number of 12 thousand people with 40 guns. The task of the detachment was to advance to Tyrnov, seize the Shipka Pass through the Balkan Range, on the way from Tyrnov to Adrianople, and transfer part of the troops behind the Balkans in order to organize an uprising of the Bulgarians.

Ruschuksky detachment was formed on July 5 under the command of the heir to the throne, Tsarevich Alexander Alexandrovich (future emperor Alexander III). General P. S. Vannovsky, commander of the 12 Corps, was appointed Chief of Staff of the Ruschuksky Detachment. And the commander of the 12 corps was appointed another son of Alexander II, Vladimir Alexandrovich. The squad consisted of 12-th and 13-th corps - about 70 thousand people. Ruschuksky detachment was to provide the left flank of the Russian army along the line of the Yantra River and besiege the fortress of Ruschuk. The detachment of Alexander Alexandrovich ensured the advancement of the Forward Detachment, shackling the enemy grouping in the quadrilateral fortress. In solving this task, the Nizhnedunai detachment was to assist the Ruschuksk detachment, diverting some of the forces of the Turkish army with offensive actions in Dobruja.

The Western detachment was created under the overall command of the commander of the 9 corps, Lieutenant General N. P. Kridenera. The squad included: the 9 Corps without a cavalry brigade, the 34 Don Cossack Regiment and the Caucasian Cossack Brigade (Terek-Gorsky and Vladikavkaz Regiments). Total 24 battalion, 28 squadrons and hundreds of a total of about 35 thousand people and 108 guns. The forces of Creedère provide the right flank of the army, take Nikopol, Pleven, and then move to the Balkans, leaving part of the troops on the flank. 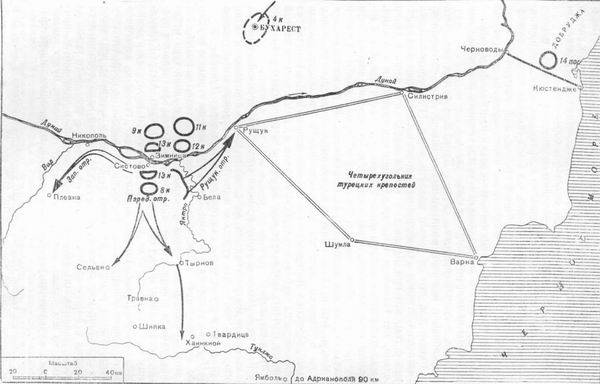 The distribution of the forces of the Russian Danube army to July 9 and the tasks of the Forward, Western and Ruschuksky detachments. Map source: N. I. Belyaev. Russian-Turkish war 1877-1878

Thus, the plan of war Obrucheva collapsed. Instead of creating two powerful army groupings with a decisive goal set for them, the Danube army was divided into three detachments, which were supposed to act in disconnected directions and perform intermediate and auxiliary tasks. A concentrated strike, after forcing the Danube, through the Balkans to Adrianople - Constantinople, before the enemy had time to react and tighten up new forces, reserves, failed. The plan of the "Russian Blitzkrieg" collapsed. None of the three units could inflict a decisive defeat on the enemy. On the main Adrianople line was the weakest of all the detachments, the Front line. He could not independently break through to Adrianople. In addition, the small forward detachment was in a dangerous position if the main forces were delayed, and the enemy managed to transfer reserves to the Balkans.

There were also errors in prewar planning, which affected the mobilization and deployment of the Danube army. They underestimated the enemy, overestimated their own forces, as a result of the forces of the Danube army it was not enough to simultaneously secure the flanks and throw a powerful strike force of troops on Adrianople - Constantinople. Only later were additional forces assigned to the Balkan theater of military operations, but they were not enough, and they were delayed by the beginning of a decisive offensive. In addition, the Russian command was impressed by the catastrophe of the French army led by Emperor Napoleon III near Sedan, and feared such a scenario. To insure themselves against any possibility of repeating such a tragedy, the Russian command allocated more than 50% of the forces of the Danube army to secure the flanks. But there were no troops left for the decisive attack through the Balkan Mountains, the 4 and 11 corps had not yet arrived, did not create a second-tier troop group and a strategic reserve for the development of an offensive on the main line in advance. Completely redundant forces defended the Black Sea coast (7 and 10 corps). As a result, the Russian Danube army, having launched an offensive, was unable during the summer campaign to deliver a deep and decisive blow at the most favorable moment for it, when the Turkish army was not ready to meet this strike. The Russian high command did not use the odds to defeat Turkey in the course of one summer campaign.

It is worth noting that the breakthrough of the Russian army through the Danube frontier, on which great hopes were pinned, caused a great upheaval in Constantinople. Although initially the supreme Turkish command planned to lure the Russians deep into Bulgaria in order to inflict powerful flank attacks (to form Balkan Cannes), to smash the enemy troops and throw them over the Danube. The commander-in-chief, Abdul-Kerim Pasha, was harshly reproached for letting Russian troops pass through the Danube. Only now the Turkish High Command noted that the Turkish troops were not concentrated and that there was no general reserve to stop the enemy from breaking through to Constantinople. The Turks were afraid that the Russians were already on their way to Sofia and Adrianople, and there was no power to stop them.

The Turkish High Command took extraordinary measures to collect troops. The concentration of dispersed troops was slow and difficult. The Turkish army did not have good communications. However, the Turks managed to carry out the transfer of Suleiman Pasha’s army from Montenegro to Adrianople by sea, and the advance of Osman Pasha’s troops from Vidin to Pleven. Also the Turkish troops occupied the Balkan mountain passes. Sultan Abdul-Hamid was extremely dissatisfied with the course of hostilities on the Balkan front. The scapegoat was appointed by the elderly commander-in-chief of the Danube forces of Turkey Abdul-Kerim Pasha. He was removed from command, put on trial and sent to the island of Rhodes. Mehmet Ali Pasha was appointed in his place. It was an Ottoman military commander of German origin. As a boy, he fled to Turkey, converted to Islam and made a military career. He fought against Russia in the Crimean War, participated in the suppression of the uprising in Bosnia and Herzegovina as a commander of the army corps. At the same time, the Minister of War, Redif Pasha, was also removed and replaced for "negligent command and carelessness of the army."

Thus, the Turkish high command, while the Russians dispersed forces and stayed in front of the Balkans, was able to take effective countermeasures. For a short time, the army was concentrated at the disposal of the Turkish command in Bulgaria, which turned out to be capable of major active operations against the Danube army, at least to active defense. 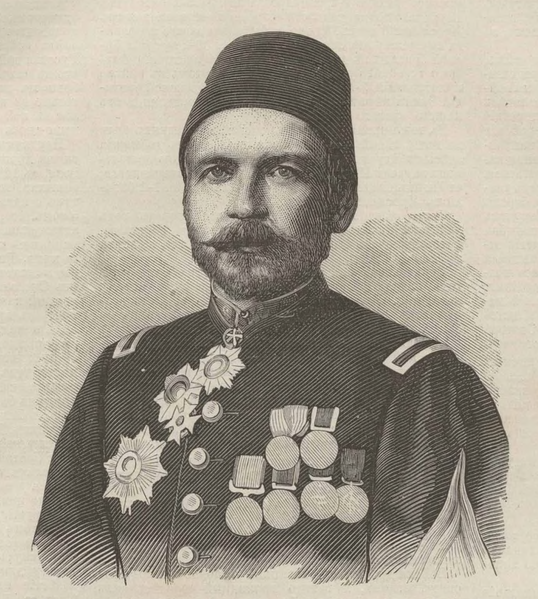 "Constantinople must be ours ..." 140 years ago, Russia declared war on Turkey
"Turkey must cease to exist"
How England battled Russia with Austria-Hungary and Turkey
How Russia saved Serbia from defeat
Russian army on the eve of the war with Turkey
Russian Black Sea Fleet on the eve of the war with Turkey
Turkish Armed Forces
“Only on the shores of the Bosporus can the Turks dominate their way ...”
Turkish command was going to arrange the Russian army "Balkan Cannes"
How England in 1877 year tried to repeat the "Crimean scenario" to defeat Russia
Speech by Montenegro on the Russian side distracted a large grouping of the Turkish army
Battle of the Danube
Battle of the Danube. H. 2
Sturm Ardahan
Dramdag and Dayarskoy battles. The failure of the Russian army at Zivin
140 years of heroic defense of Bayazet

Ctrl Enter
Noticed oshЫbku Highlight text and press. Ctrl + Enter
We are
On the territory of the Czech Republic arrived the American military convoy "Danube campaign"Reports from the militia of New Russia for 29 August 2014 of the year
Military Reviewin Yandex News
Military Reviewin Google News
10 comments
Information
Dear reader, to leave comments on the publication, you must sign in.