Kuril dreamer and partner of Innoprom-2017

July 11 2017
18
From 10 to 13 July, the international exhibition Innoprom-2017 is held in Yekaterinburg. Today, the combination of the words “international ... in Russia” is again perceived as something mundane, although less than two full years have passed since the moment when an unknown black man declared “complete isolation of Russia”. Russia well remembers Obama’s words that Russia is almost a pariah, and that this was made possible thanks to the “sanctions policy of the United States and its allies.” Today, such statements do not even look funny. In such cases, to laugh at all is a great sin. Moreover, the person is no longer with us ... well, in the sense of not being in the presidency.


Interestingly, two years after the loud Obama statement about “isolated Russia,” the situation turned upside down, in fact, exactly the opposite. The reason for this was the G-20 Summit of the Hamburg Summit, which, after its completion, Western journalists called the Summit of Nineteen. This refers to the fact that the American delegation was isolated at the summit, “thanks to the policy of Trump”. And it is really surprising ... Only two years in total - and those who loudly applauded Obama’s words about isolating Russia themselves give rise to the thesis about isolating Trampovsky America. Miracles, and only ... Outwitted themselves, they whipped themselves out. And who is to blame? Of course, Putin.
Well, he, in the absolute conviction of the West, chose Trump, not the American people, along with the electors ...

In general, their business. We return to the topic of the international technological exhibition Innoprom, which is held in the largest city of the Urals Federal District. The exhibition is really big. This, of course, is not a planetary Expo, but the figures are also very impressive. Participants - companies from 59 Russian regions and from 95 countries of the world - companies engaged in the field of technological development, industrial production, promotion of new technologies. Among the participants - not only business representatives. Political circles (where without them in the modern system of market economy, in which we either entered or got into trouble) are represented by federal ministers, regional leaders, and governments. President Vladimir Putin also "intervened."

And then, perhaps, the main thing will be to mark the country that volunteered to be a business partner of the exhibition in Russia. And this country is Japan.
The Japanese “comrades”, and it is hardly possible not to notice, are trying to make every effort to demonstrate not so much their desire to be a business partner of Russia, but the “bodily itch” about gaining control over the South Kuril Islands. Today, where, forgive, do not spit - everywhere Japanese "partners" who suddenly announced their interest in the Russian market: from the Far East to Voronezh and Moscow. That the medical centers open, then automobile manufacture (an example - Toyota) are going to localize. 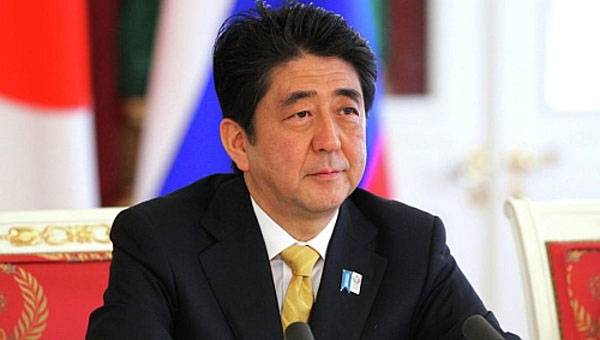 This could be taken seriously if it were not for one detail. According to what logic can one declare at the same time a “comprehensive partnership”, “support” of the structures of Russian business, health care, education and preserve anti-Russian sanctions? The East is a delicate matter, they know it in Russia, but is it really so subtle that in Tokyo they seriously expect that if an individual director of a single Japanese concern announced interest in the Russian market and Russian production facilities, then we are: “Kurils?”. Oh, business something ... Yes, take it. Better Toyota localize us. We want-want.

What is partnership? In that you throw a frank shit with one hand, including financing the militarization of Maidan’s Ukraine, and with the other you are trying to stroke Russia hinting at the Kuriles ... So sign a peace treaty to begin with, cancel the sanctions, recognize Russia in the current borders. Or the emphasis is on the business elite, for whom, as is usually the case, investments do not smell. By the way, what is the investment?

From the stated objectives of the partnership in the course of Innoprom-2017:

Raise the status of trade and economic partnership.
Expand the capabilities of national industrial sectors to other regions and countries.
Present key industrial companies and their main products.
Establish a common model of interaction in the field of research potential of the two countries.
To stimulate the dissemination of the best international practices of participation in exhibition activities.

In general, as always lately: “cooperate with us, we will give you vooooot so much of all the tasty ..., and we cannot lift the sanctions, because Big Brother does not close his eyes”

That is, they have isolated, isolated, but it turned out that they are now withdrawing their eyes like that “blue thief”, continuing to do their work quietly, and whispering in a quiet voice: I have nothing to do with it ... I’m supposedly now your partner - look how much companies to you in Ekaterinburg brought.

These are the ones with a total credit debt of more than half a trillion dollars? .. Oh, yes, this is what is called “investment” in the world economy today - take a loan from the same Big Brother at virtually zero percent, having an incredibly high credit rating from “independent agencies” ”As a kind of bonus for the American occupation of Japan, then declare that it is“ for itself ”, and then come to Russia and say that we are supposedly ready to invest in your projects. At the same time picking up the map with your finger in the area of ​​the Kuril ridge

In the end, we are not proud in Russia. Coming with business projects and innovations - we are all for it. Trade and exchange of experience is in any case extremely useful. And about Kuriles - just keep on picking the map with your finger. Well, in fact, we cannot, some kind of “isolated gas station country with a torn economy”, make concessions before concessions are made by the most naimocratic and exclusive Power in the Universe - the United States. Maybe Mr. Abe is a "Kuril" dreamer - while you localize the production of "Nissan Juke" somewhere in Hawaii - you see, the Americans will leave Okinawa for joy ...