Poroshenko: We will not apply for membership in NATO yet

July 10 2017
23
During the meeting of the Ukraine-NATO Commission, which is taking place today in Kiev, the President of Ukraine, Petro Poroshenko, stated that the authorities of the country do not intend to apply for membership in the North Atlantic military bloc. At the same time, Poroshenko once again stressed that Kiev will continue to follow the path of compliance with NATO standards and further Euro-Atlantic integration. 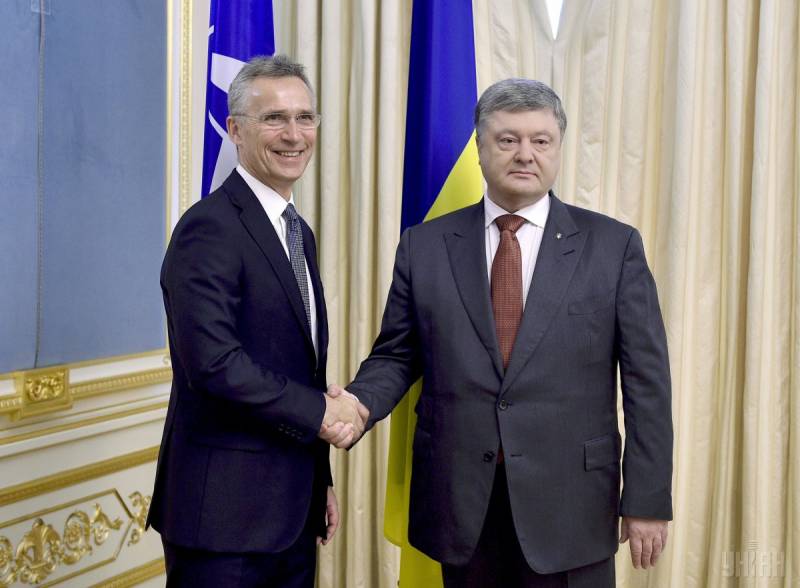 Petro Poroshenko quotes UNIAN:
Once again I want to emphasize that this does not mean that we will immediately apply for membership. Absolutely not. This means that we need to build a real reform program, a program of our cooperation, intensify our efforts to achieve the necessary standards, and here we need help and cooperation with our NATO partners.

At the same time, Kiev drew the attention of the NATO representatives to the fact that in the NATO video on Euro-Atlantic integration of Ukraine, personnel were used with the rally "Party of Regions". NATO decided to apologize for the "annoying misunderstanding."

NATO comment:
We sincerely apologize for the mistake at the beginning of the video. We are working on a video fix.

Meeting with representatives of the Ukrainian authorities, NATO Secretary General Stoltenberg said that the alliance "will continue to assist Ukraine in terms of the country's defense." According to Stoltenberg, Ukraine’s cooperation with NATO is “extremely important for Ukrainian“ stability and prosperity. ”

Against this background, Ukrainian political analyst Pavel Rudyakov believes that if Poroshenko continues to move Ukraine to NATO, then several more regions will “fall off” from the country.

Recall that polls show: about 40% of the country's citizens are opposed to Ukraine joining NATO. The authorities are obviously not going to take their opinion into account. For the introduction, according to polls, is about 49% of Ukrainian citizens. The rest could not decide or said that they do not care.