November 24, 2012
7
Hand grenades of the Russian army in the First World War

In early August 1914, the First World War began. Million army moved to the front. Fighting qualities weaponsWith which the Russian soldier fought in this war, they were quite sufficient: Russian rifles, like our other weapons, completely satisfied their purpose and were no worse than most of the rifles of foreign armies. The catastrophe of weapons suffered by the Russian army in this war depended not on the quality of the weapon, but on its quantity. Within a few months, the troops lacked rifles, artillery shells, hand grenades and much more. But what to say, if ordinary wire fell into the category of scarce materials ... 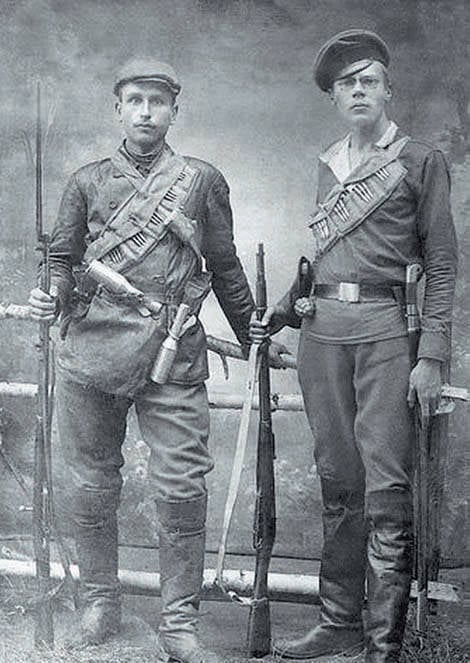 Photo 1918 of the year. In order to hang the 1914 model's grenade on the belt, the ring had to be moved to the base of the handle. In this position, the lever is released, the drummer is not cocked

In 1908, the duty to supply the army with grenades was assigned to the Main Artillery Directorate. All documentation GVTU on the development of grenades was transferred to the GAU. However, experts of the State Agrarian University differently imagined the development trends of this type of weapon. If in the GVTU, based on the experience of the past war, they preferred grenades of striking action, then the specialists of the Main Artillery Directorate concluded that a remote-action grenade is preferable.

The development of remote grenades began in 1909 – 1910 by the captain of artillery V. I. Rdultovsky.
V.I. Rdultovsky was born in Vladikavkaz in 1867, graduated from Voronezh Cadet Corps in 1893, Mikhailovsky Artillery School in 1896, Mikhailovsky Artillery Academy in 1902. In the rank of captain he served in the 3-th reserve artillery brigade, was engaged in the development of ammunition. After the revolution, he remained in Soviet Russia. Rdultovsky developed various ammunition from grenades to aerial bombs. In 1928, he was awarded the title “Honored Scientist”, in 1933, he was awarded the Order of the Red Star. He was the main consultant of CDB-22, he taught at military academies.

This grenade was developed by Rdultowski back in the 1909 year and the highest approved in December of the 1910 year. Comparative tests of the Lishin grenade, conducted in the Ust-Izhora camps, showed its superiority in the following positions:
- reliability of operation (all abandoned remote grenades exploded, while the Lishin 70% grenades, thrown on the marshy soil, were denied);
- comparative compactness (due to its size and shape, the new grenade turned out to be more convenient for throwing from the prone position and from the trench);
- safety of the thrower (small fragments of a distance grenade flew at a smaller distance than the damage of the thrower was ruled out);
- striking ability (a grenade formed fragments near the 1000 explosion and created a continuous destruction zone around the explosion site);
The following main drawback was noted - the constant time of deceleration, which allowed the enemy to drop the grenade.

In general, the commission concluded that "... the pomegranate seems to be designed very witty and deserves full attention ...".

The description of the grenade said: “... the shell of a grenade consists of a zinc box, with a lid and bottom, to which a wooden handle is attached, a pad covering the drummer with a combat spring and a sleeve fixedly fastened to the pad is riveted to one of the side walls.

The bursting charge has the appearance of a prism, with cut corners, is made of pressed melinit and weighs 1,4 pounds. A groove is made along the axis of the grenade into which a brass thimble is inserted when assembling the grenade. With the final outfit of a grenade, this thimble includes a remote tube and a capsule with 2,5 grams of explosive mercury.

The percussion mechanism consists of a hammer with a handle, a mainspring, a sleeve that is fixed inside the lining, checks and a delay with a spring.

The ignition device consists of an aluminum ignition tube of a small capsule, a bronze tube with pressed-in distance composition and a capsule-detonator with 2,5 grams of explosive mercury.
Pomegranate fragments are placed inside the grenade between the shell and the warhead, and consist of four zinc plates with cross-shaped slits and zinc triangles (about 500 pieces in total) piled in grenades ... ”. 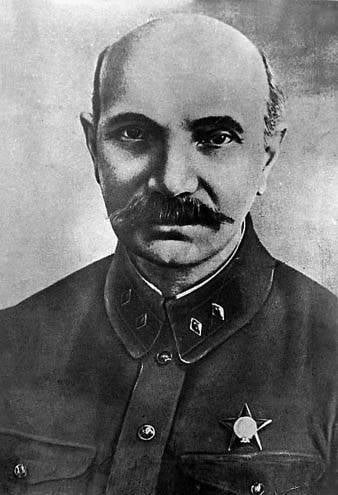 The case from the inside was covered with shellac varnish.

At the moment of throwing the safety ring remained in the hand. The grenade puff was spinning around its axis and the drummer pinched the primer cap. After the retarding composition burned out, an detonator and a grenade charge exploded.

Some difficulty in handling a grenade was the result of the increased requirements of GAU specialists for the safety of grenades. It is at the request of the GAU design had two fuses. One — the safety valve — was removed before the throw, the second — the safety ring — was removed at the moment of the throw. It was emphasized that if a bullet hit the soldier at the time of the swing, the grenade would not explode anyway, since the safety ring would remain on the handle. By the way, later we will see that this trend will continue in the future. Grenade RGD-33 will also be cocked at the time of the throw.
During the explosion, about 1000 splinters were formed: about 500 splinters from the gratings and about 300 from the grenade body were added to the ready-made 200. The grenade explosions produced during the tests showed that: "... a significant part of these fragments, directed upwards and into the ground, disappears, but still in a circle with a diameter of 9 arshin, composed of growth targets, it turns out from 150 to 400 through holes in inch boards ...". 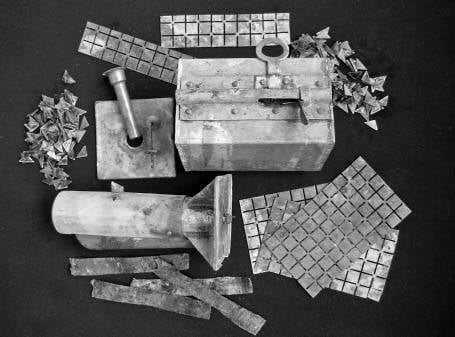 Production of grenades was started only in 1912 year, and in the same year the first batches of them were put into service with the fortresses. The commanders of the infantry and engineering units repeatedly asked the leadership of the Main Artillery Directorate to send samples of grenades to conduct classes with officers and lower ranks. The Main Engineering Department requested the artillery department about the possibility of supplying grenades to the engineering units. The journal of the meeting of the mobilization meeting of the Vilna military district indicated "... it is recognized that it is highly desirable to supply field troops with hand grenades ...".

However, GAU refused in all cases. For example, here is a document from April 1912: “According to the notification of the General Directorate of the General Staff, there is no urgent need to insert hand grenades into the table of rations for field troops. The marked hand grenades were taken to supply them only with serf artillery ... ”.

Эти ручные гранаты в целом зарекомендовали себя с хорошей стороны. К их достоинствам следует отнести высокое поражающее действие (например, осколки гранаты образца 1912 года пробивали дюймовую
pine plank at a distance of 1-3 fathoms, the number of only ready-made fragments in this grenade was about 600 pieces), cheapness and ease of manufacture. Front-line soldiers prefer this grenade to other structures. Here is what one of them remembers: “... remote grenades, stuffed with the Ophten Plant Trotyl ... are the favorite grenade of scouts. It is proved that the Germans do not like them very much ... ".

Subsequently, for the armament of the troops, a grenade of the 1914 model of the year was developed and adopted. Compared with the previous sample, it was lighter, more compact, had a more favorable shape.

The grenade consisted of a tin case, an explosive charge, a fragmentation grid, a school mechanism and a fuse.

The nakolny mechanism was located in the housing tube and resembled the grenade mechanism of the 1912 sample of the year.

The grenade body was filled with explosives. TNT and melinite were supposed to be used as standard explosives. However, in the course of the war, surrogate explosives based on ammonium nitrate also went into action. Grenades, equipped with such explosives, were not inferior in damage to the usual properties of grenades, but had very serious disadvantages associated with the chemical properties of ammonium nitrate. Already soon after the arrival of such grenades to the front, it was noticed that their bodies were subjected to severe corrosion, and the equipment could lose explosive properties due to its high hygroscopicity. To protect the "capricious" explosive from moisture, we had to pay more attention to the tightness of the cases, more thoroughly solder the seams of the case, which was difficult and caused additional costs.

Storage of such grenades required dry ventilated rooms, which was not always possible. Here are some excerpts from the documents of the time - 13.05.1916. The commander of the Kazan Infantry Regiment 64 informs the Chief of Staff of the 16 division: “1916 of May 9 of the day, we the undersigned, testified to the 64 infantry regiment of the Kazan regiment in 3 Park 16 of the Park Artillery Brigade on the 2 coupon of this May for 12 thousand two hundred (1200) grenades of the 1914 model, which was put by a man. ) are completely unsuitable for use in combat, since the majority of them have the spring of the lever leaped from careless storage, due to which the lever does not work and in some of them the latch holding the capsule is seized, and therefore the faulty grenades are seven hundred seven Eat (770) units are subject to delivery back to 770 Park, which they decided to record in this act. ”

In the story "School", whose actions take place already in the civil war, A. Gaidar describes the use of hand grenades of the sample. 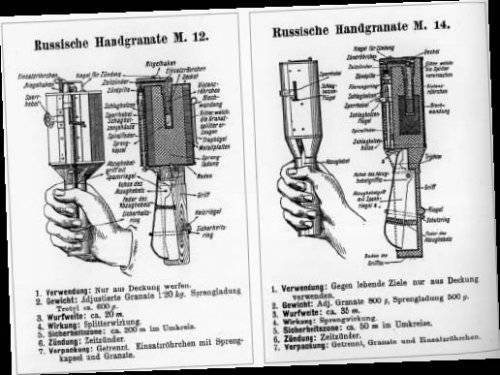 Or another: “... - Throw down the bomb! - I heard a short order and saw how something flashed in Chubuk’s hand and flew down. A dull rumble stunned me. - Throw! - shouted Chubuk and immediately pulled my raised hand, grabbed my bomb and, clicking the safety catch, threw it down.
- Fool! - He snapped to me, completely stunned by the explosions and stunned by the rapid alternation of unexpected dangers. - Fool! The ring was removed, and the fuse left ... ". 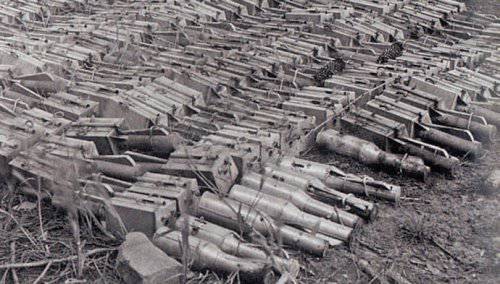 “... Bomb? - smiled Chubuk. -This, brother, are not you alone, it is almost every unaccustomed will certainly throw something wrong: either with a fuse or without a cap. When I was young myself, I also threw it. Stunned, stunned, so there is not something that the fuse, and forget to forget the ring. So it seems to be like a cobblestone you will launch - and that is fine ... ”.