The prewar statutes of the French army recommended the following scheme of combat use of artillery: during battle, the batteries maintain a waiting position, and only the minimum number of them opens fire, the strength of which is determined by the size of the firing area and the importance of targets. They believed that the one who at the end of the battle will have fresh batteries will win.

The work of artillery was based solely on the use of 75-mm cannon, which was supposed to support the attack of the infantry and work wonders of accuracy, while the importance of heavy artillery was underestimated.

But during the very first clashes with the Germans, the entire infidelity of such an assessment of artillery tasks became clear: the French light artillery only supported the attack of the infantry, but did not prepare it. Therefore, the French suffered heavy losses, while the German attacks were preceded by whole “vanguards” of large caliber shells, which, of course, was often the decisive factor for the outcome of the battle. In addition, German batteries were often beaten from considerable distances, and the French 75-mm guns were unable to reach them.

Since the end of 1914, the Western Front has “frozen” - a positional war has begun.

Since the beginning of spring 1915, the French began to practice artillery preparation before the infantry attack, but still weak. Their September 1915 attack in Champagne coincided with the end of the reorganization of the artillery and the assimilation of new methods of fire fighting. Schemes of destruction by artillery of wire obstacles and neutralization of targets during the attack arose - the idea of ​​artillery preparation took deep roots, and the infantry gradually lost the habit of doing without it. In the same period, the methods of applying heavy artillery were developed - the artillery of the army corps received group organization.

Artillery preparation of the period 1915 was based on the following principles:
1. Conducting operations on a broad front was determined by the use of a series of consecutive attacks, the depth of each of them was limited by the size of artillery preparation.
2. The reduction in attack time was achieved by the use of large and actively maneuvering masses of artillery.
3. A close connection between artillery and infantry was achieved by organizing observation posts near the attack site.

But it was not possible to increase the number of artillery to such size - all resources were spent in the Verdun battles, which once again demonstrated the importance of powerful artillery fire and firing from long distances.

At the beginning of the Verdun operation, the use of barrage fire reached its apogee, but then the idea of ​​artillery counter-preparation appeared, inflicting much more casualties on the enemy than the barrage fire could have done.

This was followed by the recognition of the need to achieve a significant increase in the density of artillery masses.

The experience of the Verdun battles strongly demanded an increase in heavy artillery guns, the number of which they tried to bring to the 4000 guns.

The French offensive during the 1916 campaign was already based on the preparation of an infantry attack by methodically destroying enemy barriers within a few days.

The French gunners tried to achieve complete destruction of enemy batteries and trenches; the intensity of the fire accompanying the infantry increased significantly - a barrage of fire appeared; in the intervals between attacks, barrage and counterpreparation were practiced; chemical munitions began to be used for counter battery combat.

The evolution of artillery tactics in the 1918 campaign of the year was facilitated by the following circumstances:

1. The appearance tankswho abolished the importance of barbed wire and reduced the duration of artillery training.

3. Major technical improvements in the artillery case - in particular, the achievement of rapidity of fire. As a result, the batteries were able to get into the battle very quickly and to conduct accurate marksmanship without premature detection of themselves.

4. The number of rapid-fire guns has increased to such an extent that in a few hours it was possible to release as many rounds as before and in a few days - this also contributed to the reduction of the time needed for artillery preparation and, consequently, greater surprise.

5. The abundance of ammunition led to the possibility of unlimited shooting, and the use of chemical shells made it possible to quickly neutralize the enemy batteries.

When attacking, they ceased to strive for methodical destruction of the enemy defenses - sometimes they managed to get short and strong artillery preparation and without preparation at all. During the execution of the attack, they sought to completely neutralize the enemy infantry and artillery, the observers, suppress the enemy’s counterattacks and isolate the assembly area and the approach of its reserves.

To exploit the success of the movement of artillery was carried out - in order to provide the infantry reliable and, if possible, strong support. At the same time the placement of artillery capacities in groups was allowed, but, so that, as soon as necessary, they could be reassembled into a fist.

During the defense, artillery depth separation, battery masking, flexibility in maneuvering and firing, and reserve operations were used.

During the war, such issues as the close connection of artillery with infantry, the density of artillery fire, the interaction of field and heavy artillery, both divisional and corps, acquired particular importance.

The main thing on which the French artillery based its action was the principle of sudden artillery fire, provided that the existing artillery was massaged in the area that decided the fate of the battle. 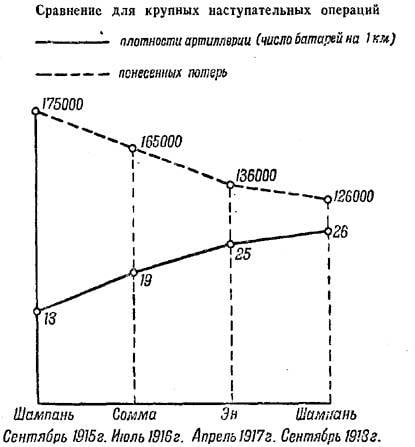