How the Americans destroyed the Iranian airliner 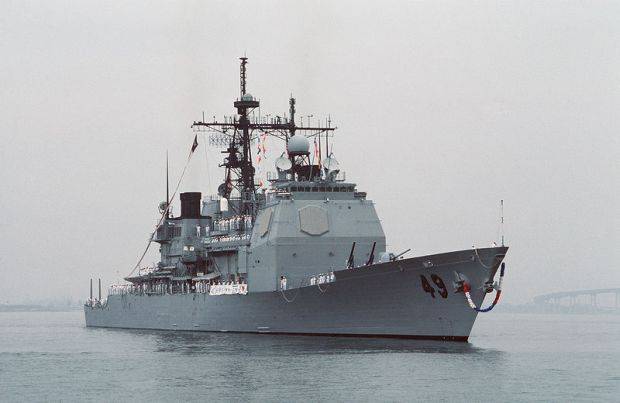 
This tragedy, like many other similar ones, has two versions of events, two conclusions and two finals. stories. Naturally, sympathizers of the United States, of course, consider the Iranians themselves to blame for everything, and the opposing side - the relatives of the victims - still curse the American sailors, considering them to be involved in a war crime.
What happened on the morning of July 3 1988 in the Persian Gulf?

Iran Air liner Airbus A300B2 of Iran Air Airlines (IR655 flight) took off from Bandar Abbas airport and headed for Dubai. Since the distance was relatively small, the liner was supposed to rise to the height of the entire 4300 meters. But just seven minutes after takeoff, in 10: 54 Tehran time, flying about 75 kilometers, he was shot down over the Persian Gulf by an anti-aircraft missile of the American cruiser Vincennes.

16 crew members and passenger 274 died, 65 of whom were children. A total of 290 people, among whom were not only Iranians, but also citizens of Pakistan, the United Arab Emirates, India and Yugoslavia.

But further discrepancies began in the assessments of what happened. The Americans claimed that the cruiser fired a rocket while on the "border" of Iranian territorial waters. Moreover, the cruiser "defended", and the passenger liner was identified as the Iranian F-14 fighter because of the "technical error".

The version of the Iranian side looked different - the American cruiser invaded the territorial waters of Iran, where it destroyed the Iranian Erbas. Moreover, the plane flew in a special air corridor, which was used only by civil aircraft, and the Americans should have known this.

American "excuses" about technical errors seem to be untenable for what reason. The Americans did not have a ship of any kind, but a new cruiser, equipped with the latest Aegis system. The very same, a modified version of which is now used on American destroyers of the class “Arly Burke” and on anti-missile defense bases in Romania and Poland.

That is, the cruiser “Vincennes” was not the galoshes of the times of the First World War with a crew oriented by the stars, but one of the most modern ships at that time, not only in the American navybut also in the world. His Aigis information management system had no analogues at that time. And this very vaunted system took a huge passenger airliner for a relatively small fighter.

Moreover, the liner gained altitude, and did not dive to the cruiser, and even flew with the included transponders. Whether the Aegis system is a junkie, or it is serviced by its idiots, one way or another, the cruiser commander William Rogers decided to shoot down the plane. What happened in 10: 54. 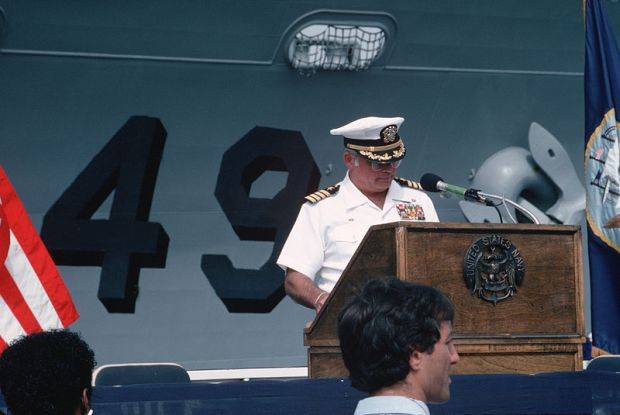 Will Rogers. Photo from wikimedia.org

The investigation into this incident began immediately, but ... it was classified until the 1993 year. That is, for five years, its results were available to a very narrow circle of people.

Nevertheless, interesting details surfaced almost immediately. The cruiser requested the Iranian airliner ten times - seven times on the military channel and three times on the civil one. Why it was necessary to request a plane with the transponder on - it is not clear. Yes, even on the military channel. The Americans tried to get out again awkwardly, saying that they were on the cruiser - that's bad luck - it turns out that there was no equipment capable of negotiating with civil aircraft. The Aegis system at the cost of hundreds of millions of dollars is there, but there was no lousy transmitter for a hundred bucks. So, it was necessary for prophylactic purposes to fire a rocket from the Iranian territorial waters along the Iranian take-off liner, mistaking it for a fighter diving to the cruiser. Americans are not guilty that the liner did not respond?

The Iranians, in turn, do not understand how the pilots of the liner, with all the equipment turned on and properly working, allowing to identify the aircraft’s civilian identity without any problems, could they answer the cruiser’s requests through the military channel? They are confident that the advanced equipment of the cruiser without any problems allowed him to identify the civilian airliner flying, moreover, in the international air corridor, but the Americans deliberately destroyed it.

But the Americans do not consider themselves guilty. And Captain W. Rogers, on whose conscience 290 ruined lives, is also not to blame. This clever piece of iron "Aegis" gave him information that the cruiser was attacking, and he gave the appropriate order. What is his fault? Moreover, his actions were recognized as correct, and for the victory over the Iranian passenger plane, he was soon awarded the Legion of Honor.

The Iranians tried for a long time to seek justice in international courts, filed lawsuits, but, as expected, they only achieved compensation payments to the relatives of the victims. But not an apology. Moreover, President D. Bush Sr. soon declared: “I will never apologize for the United States, despite all the facts.”

Here is someone who needs to learn from our authorities! The daddies of Katyn on a platter with a border to the “partners” will be brought up, for which they will hate us even more, the black boxes of the South Korean Boeing shot down over Sakhalin in 1983 will be handed over with clasps. But the American presidents directly send all the disgruntled to a known address. And “common people” are not offended to the depths of their souls with such boorish statements, but on the contrary, they applaud enthusiastically and call the USA a great country.

From this whole story, you can draw the following conclusions. If 29 years ago, even with the presence of a second center of power in the person of the USSR, the USA already behaved like shameless and unprincipled "masters of the Universe", then what can we expect from them now? When they have long been no words across can not say. Clearly nothing good.

If earlier they, without much hesitation, shot at passenger planes, now, it seems, they will also demolish any country without thinking if they suddenly do not like it.

There are even more questions about the acclaimed American technology. The Aegis inflamed system could not distinguish the liner from the fighter, and, as the investigation showed, it incorrectly determined its speed and height. But these systems are not only floating around the world, being the standard equipment of class destroyers "Arly Burke", but also are on duty in Romania. And it is difficult to say how they will behave in the event of a contingency. Yes, and the staff serving the American technology, raises a lot of questions. It is in the Hollywood cinema that the US military acts as a single coordinated mechanism, and what will happen if the human factor overlaps with a technical failure? After all, 3 July 1988, it was just the place to be.

And finally, the last. Americans will never admit their mistakes. And war crimes even more so. Therefore, one should not expect from them a “civilized” dialogue. The United States should be treated the same way as the gopnik waiting for you in the doorway with a baseball bat. Therefore, before you go there, it would be nice to get a cudgel heavier. And better - shafts.

This is exactly what the Soviet Union did, and that is why it was considered. In all other cases, Americans will talk like cowboys in westerns - first shoot with both hands, and then think. Maybe they will even pay some money later, as happened in 1996, when all compensation issues were settled with the relatives of the victims of flight IR655. That's just 290 people from the world without any compensation can not be returned ...