Business in Polish: we give you money, and you come to us ... come 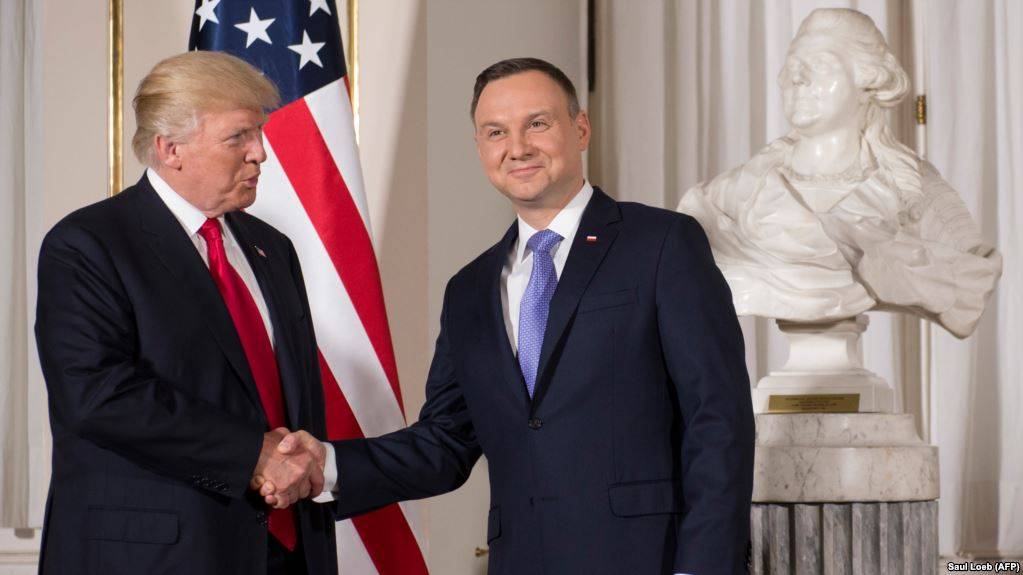 On the eve of the G20 summit opening in Hamburg, German President Donald Trump, who was prepared for the role of the protagonist (if not antihero) of the upcoming forum, visited Poland.

Why Trump arrived in Warsaw, to assume, in general, is not difficult. Suffice it to say that as a result of his meeting with his Polish counterpart Andrzej Duda, the parties made a deal to supply US Patriot air defense systems for a total of 7,5 billion dollars. According to the Minister of Defense of Poland Anthony Macherevich, this complex will allow “to effectively counteract the Russian Iskander systems.” It is noteworthy that deliveries of the air defense complex developed in the eighties of the last century will begin only in 2022, while its tactical and technical characteristics already today cast doubt on the ability to resist the Russian counterpart. If we add to this the fact that the contract price is only a little short of the volume of the Polish defense budget, then there are plenty of questions to the military-political leadership of the republic in this connection.

However, this attraction of unprecedented American "generosity" did not stop its work. For example, during negotiations with Duda, Donald Trump promised to supply liquefied gas from the United States to Poland in particular and to the region of Central and Eastern Europe in general. The ultimate goal of such declarations lies on the surface - to offer American gas to European consumers instead of Russian gas and, in addition, to hinder the implementation of a joint project of Moscow and its international partners to build the Nord Stream-2 gas pipeline. As you can guess, this idea is being submitted under the pretext of weakening the energy dependence of the countries of the Old World from Russia.

And if everything is more or less clear with the plans of Washington, what motivates official Warsaw is a mystery. But only at first glance.
Long before Trump arrived in Poland, local media and the political establishment called the arrival of “politics number one in the world” a huge success based only on the fact of the visit, and Andrzej Duda, before meeting with his colleague, was noted by a number of statements in this regard. In particular, the Polish leader expressed hope for an increase in the US military contingent in the country, as well as for the signing of a long-term contract with the United States for the supply of liquefied gas. And if in the first case the aspirations of Mr. Duda, to all appearances, did not materialize, then in the situation with LNG from overseas, as mentioned above, Donald Trump did not stint on the promises.

We have to admit that in this situation, the leadership of Poland can hardly be accused of being too stupid. Rather the opposite. We will start with the additional number of United States troops on the territory of the republic, the need of which the Polish authorities traditionally justify with a permanent threat from Russia. Despite the overwhelming level of Russophobic sentiment in Polish society, there is no reason to assume that the Poles are seriously considering the possibility of a Russian invasion of the country's territory. Everything is much simpler - the hospitality of Warsaw in relation to overseas soldiers is caused by a trivial desire to earn extra money, since a foreign military contingent is primarily a lot of money in the treasury of a country that accepts military personnel, as well as providing the necessary infrastructure paid by the sending state.

As for the American LNG, then Lithuania was already in a similar situation, hoping to eventually become a hub for the whole of Europe, but the price of fuel from overseas turned out to be a third more expensive than Russia, which did not allow this idea to be realized. However, Poland, like Vilnius at the time, hoping to become a distribution center for liquefied gas from the United States to neighboring countries, hopes that Washington will become a sponsor of this project called “Troyemore”. And these hopes, we must assume, are not groundless.

The fact is that at the moment the US-Polish relations are at the stage at which Warsaw has the right to expect to receive the status of the regional guide of the United States policy in the region. At that moment, when Germany and France openly express discontent with the actions of Donald Trump, the Polish leadership, on the contrary, seeks to prove its loyalty to the White House’s master, believing that in this way it will be possible to strengthen the country's position vis-à-vis Russia and the rest of Europe. In addition, the defense expenses of the Eastern European state exceed the percentage of GDP required for the NATO country 2, and it is possible that by opening his visit to the Old World by visiting the Polish capital, the American president expressed his attitude to those participants in the military-political bloc who had financial obligations before the alliance do not perform.

In any case, both of them were satisfied with the results of the visit: some were able to sell their goods at exorbitant prices, while others pushed their own pride with what they were shown and allowed to buy this product. Let stale.