July 8 2017
4
July 3 premiered the documentary film “Ivan Agayants. Way in history"For the 95 anniversary of the illegal intelligence of the SVR ... 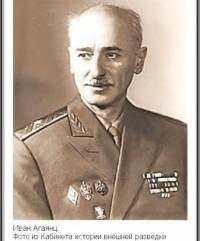 3 July 2017 of the year on Russian television premiered the documentary film “Ivan Agayants. Path to history "to the 95 anniversary of the illegal intelligence intelligence SVR.

After graduating from high school was on the party work. In 1930 he moved to Moscow, where his two older brothers (AI and MI Agayants) worked in the OGPU, and was enrolled in the economic department of the OGPU. In 1936. In the first performance characteristics of 1931-1932. He was noted as “an enterprising, energetic and intelligent employee”, “well-developed, conscientious, devoted and active”. And in 1937, there is also an unusual for that time wording: “Extremely conscientious worker.”

In 1936 transferred to foreign intelligence agencies, and in 1937, he was sent for operational work to the Paris residency under the cover of first an employee of the Trade Representation, and then the head of the consular department. After the fall of the republican regime in Spain, he took part in the operation to bring the leaders of the Spanish Communist Party, José Diaz and Dolores Ibarruri, to Moscow.

In 1940, he returned to Moscow for middle management in intelligence. From the beginning of the Second World War, from July 1941 to July 1945 was appointed a resident of the NKGB in Iran, where he showed his extraordinary ability in intelligence work. Supervised activities to identify and eliminate the Nazi agent network in the country. He oversaw the resident activities in Iran, in particular Gevorg Vartanian’s “Light Cavalry” group. In 1943, they managed to thwart the attempt on the leaders of the anti-Hitler coalition of Stalin, Churchill and Roosevelt.

With 1943, the work in Algeria was connected with the need to find out what constitutes the National Committee of the Fighting France headed by General de Gaulle, what real forces are behind it, what are the chances of de Gaulle to become the national leader of France. It was also necessary to clarify the views of the general on the post-war structure of Europe and the nature of his relationship with the Americans and the British; to ask what the American and British intelligence agencies are doing in Algeria, what their positions and plans are. The task was set by Stalin himself. Agayants held a series of meetings in Algeria with General Charles de Gaulle, with whom he was familiar from Tehran. It was through Agayants that the formulation of the question, de Gaulle's visit to Moscow itself and his meeting with Joseph Stalin, was worked out. The task of Stalin was successfully completed.

In addition to this mission, he conducted operational activities against fascist Germany in Egypt and Iraq, worked in mountain villages with Iranian Kurds. Thanks to the charm, intelligence and professionalism of I.Agayants, many foreigners agreed to cooperate with Soviet intelligence. A well-developed set of intelligence activities allowed the acquisition of new, well-informed sources at important government facilities in Iran. As the leadership of the Center noted, the work of the residency has played "a significant role in making certain political and military-strategic decisions by the military command and the country's leadership." This is a high score.

In 1946, after a short trip to Romania, Agayants with his wife (a staff member of the USSR NKGB) and three children are sent to Paris, where he is in 1946-1947. He was a resident of the MGB under the name Avalov. With the help of a reliable agency, the residency, under the leadership of Agayants, among other things, was able to obtain the secret "Marshall Plan" of the United States, which was important for the foreign policy developments of the structures of the USSR.

After returning to Moscow in 1947, he headed one of the directorates of the Information Committee at the Ministry of Foreign Affairs of the USSR. From 1952, he is the Head of the Department of the First Main Directorate of the USSR Ministry of State Security for Central European Countries. 1954-1959 he worked as head of the department of special disciplines in the special school number 101 (now - "Academy of Foreign Intelligence"). When it came out the first textbook of political intelligence, which became the main guide for students. In 1959, he was appointed head of a special unit, the “D” division, designed to play the role of organizer and coordinator of foreign intelligence in the development and implementation of active measures. Having bright organizational abilities, extensive contacts in foreign policy and international spheres, administrative apparatus, it was under I.Agayants that a new stage began in the organization of “influence actions” and the most productive form of these events was born - complex actions with different proactive, offensive and long-term character .

Among other events, aggressive steps and plans of the USA against Cuba, Congo, and Laos were thwarted.

In 1965, he was given the rank of Major General of the KGB of the USSR, rare for reconnaissance of that time. In 1967, he was appointed deputy head of the First Main Directorate of the KGB (foreign intelligence).

Ivan Ivanovich Agayants 12 May 1968 of the year died of transient cancer. Buried at the Novodevichy cemetery next to his wife. 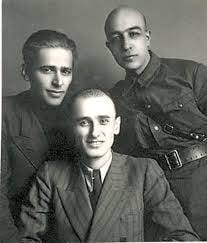 I.Agayants is the organizer of the numerous agent network of the USSR in the countries of North and South America, in several countries of Western Europe. Over the years, agent-operational work personally recruited many valuable agents, which for a long time were sources of obtaining important documentary information. Author of the development of theoretical problems of the intelligence service of the USSR. Working “for wear” and never sparing himself (despite the severe form of literally “eating up” his tuberculosis and without a lung), Ivan Ivanovich, always perfectly shaven, fit and elegant, was the best example of a real intelligence officer for his colleagues. His strength was in the thorough knowledge of the methods of work and in the skill of the professional intelligence officer, an excellent response, ability to navigate the environment and analyze it, in high culture and intelligence. And in the brilliant art of recruitment. The network of agents created by him during his stay in Tehran and Paris continued to work without failures for many years

He was fluent in French, Persian, Turkish, Spanish, and fairly well English and Italian.

In the study of the history of intelligence at the headquarters of the SVR in Yasenevo there is a memorial plaque, on it are 68 names. These are people who have made a significant contribution to the formation, development and activity of intelligence in its history. Among them, the name of Ivan Ivanovich Agayants takes a worthy place.

Agayants was not only a talented intelligence officer, but also a skillful politician and diplomat, he never locked himself up in the framework of his narrow departmental interests. So, on his initiative and with his personal participation in the USSR, 50 paintings by the artist P.P.Konchalovsky, located in Paris, the archives of the composer S.Rachmaninoff, diaries of the writer R.Rolan were returned.

In 2011 The head of the press bureau of the SVR of Russia, Sergey Ivanov, said: “The Foreign Intelligence Service of the Russian Federation will not be able to commemorate the anniversary widely due to the fact that the operations conducted by Agayants are still classified.”

20 in May 2014. The Armenian Post issues a block of 4 marks in circulation, dedicated to intelligence officers of Armenian origin - Jacob Davtyan, Ivan Agayants, Ashot Hakobyan, Haik Hovakimyan, and a single-brand mail block dedicated to legendary reconnaissance Gevorku Vartanian.
Antoine Gurgenovich Arakelyan, Vice-President of the Union of Diasporas of Russia, Coordinator of the “Dialogue and Delo” International Humanitarian Network

Author:
Antoine Gurgenovich Arakelyan, Vice-President of the Union of Diasporas of Russia, Coordinator of the “Dialogue and Delo” International Humanitarian Network
Originator:
http://ruskline.ru/news_rl/2017/07/04/razvedchik_ot_boga/