On the path of a chemical hurricane. Part of 2. Gas tornado on the Ikskyul bridgehead

July 11 2017
5
25. 09. 1916, the German troops struck a chemical attack on the positions of units located in the Ikskylsky bridgehead (bridgehead) infantry 173-th Kamenetz Regiment.


The regimental combat station was occupied by two battalions, another was in the regimental reserve, located on the west bank of the r. Dvina. 3 outposts (24 - 48 fighters in each) were located on the forward positions on the bridgehead, located at a distance of 35 - 150 steps from enemy trenches. Telephone communication linked the gates with both battalions and the regiment. Moreover, each outpost (and each regimental company) had gas secrets - it was their task to promptly detect the beginning of the gas attack of the enemy. A signal of the beginning of such an attack was a red rocket.

The personnel of the 173 regiment and the entire 44 Infantry Division, which it was part of, were informed in June of 1916 about the combat properties of toxic agents. The soldiers underwent a fumigation procedure, listened to lectures of Professor Lavrov, who was invited to the division. The officers, as well as non-commissioned officers and intelligence officers received gas masks from Zelinsky-Kummant, and privates - gauze masks No. 4 (with two gauze liners - one against chlorine, and the second - against hydrocyanic acid); a number of lower ranks also had gas masks.

25. 09. in 4 hours 25 minutes the regimental headquarters received the first message about the beginning of the German gas attack. On the eve of the attack, the soldiers in the advanced trenches and secrets heard in the German trenches intensified fuss and sharp hiss.

They did not succeed in detecting the gas wave - and the front-line fighters began to wear masks when the gases began to fill the trench. Moreover, one of the soldiers, Private Kitaev, did not put on a mask, rushed to the telephone along the message, already filled with gas, and it was he who reported the attack to the regimental headquarters. Then the hero fell and died on the spot. Since the soldiers on the outpost put on their masks while inside the gas wave, they almost all died or were seriously poisoned.

The positions on the right flank of the reconnaissance lieutenant Yanovsky and the staff captain Razumov at the head of a group of their soldiers were at the German wire fence. The officers, noticing the strange fuss at the enemy's trenches, saw how the Germans installed gas cylinders. The scouts rushed to their trenches, trying to warn their own of impending danger - but they had to flee already in the clubs of the poisonous substance. Lieutenant Yanovsky ordered a red rocket to be fired - and only then ran along the message, filled with poisonous gases, to his mask, which was in a dugout.

The regimental units began to take measures to repel the chemical attack of the enemy - fires lit up everywhere. But the situation was seriously complicated by the hour before dawn - the bulk of the soldiers were fast asleep. This led to a loss of time - after people were awakened, many fighters wore their masks at the moment when they were already inside the gas wave. Many soldiers who did not have masks on themselves, increased fuss, trying to find them. The gas wave quickly filled all the lowlands - and of course the trenches in the first place. Vanity occurred under the influence of poisonous substances - accordingly, the masks did not fit properly, put on somehow, there were gaps - especially gas masks. In addition, masks No. 4 were not designed to counter phosgene - namely, it was the Germans who used it.

In addition, the situation was complicated by the need to repel an enemy infantry attack with up to two battalions - and the soldiers had to stand with rifles in their hands in gas-filled trenches and fire on the incoming enemy. But Russian soldiers and officers fought valiantly, showing courage and self-sacrifice. And the attack of the German infantry - mainly by artillery and machine-gun fire - was repelled.

But at that moment, the 2-I and 3-I gas waves went, followed by a new offensive of the German infantry. But this attack was repelled - by field artillery and pre-gunned machine guns.

Reaching the positions of Russian troops, colorless gas poured trenches and communications — relatively safe areas formed near fires, which turned out to be the best anti-gas agent. People who were near the fires, as a rule, avoided poisoning. Thus, the regimental commander, Colonel V.E. Lewis, who took off his mask in order to give orders over the telephone, ordered the fire to be set up in his dugout and at the entrance to it. As a result, the colonel received only a slight poisoning.

In general, all those who, without losing their heads, applied at least some precautionary measures: he climbed a tree or some hill, wrapped his head with a wet towel, hid under a coat coated in mud and so forth - survived. But the conditions of the ongoing battle were of great importance for the effectiveness of the measures taken: they distracted people from concerns about personal safety - after all, the need to load rifles, move, give orders, report, etc. made gas masks and masks very burdensome. And in a situation where many fighters gasped even while putting on masks, it was all the more difficult to breathe them, having affected respiratory organs.

But since the trenches and the communications were the places with the highest concentrations of toxic substances, support and reserve companies suffered the most.

Gradually, the consequences of the poisoning began to show up: the soldiers were breaking down in large quantities and, again along the lines of communications, were moving towards the forward dressing station. In the course of communications filled with gas, many of them lost their last strength, fell and died, and those who reached the dressing station were in a very serious condition. Some sections of the communication lines were so overwhelmed with victims that it was impossible to pass. 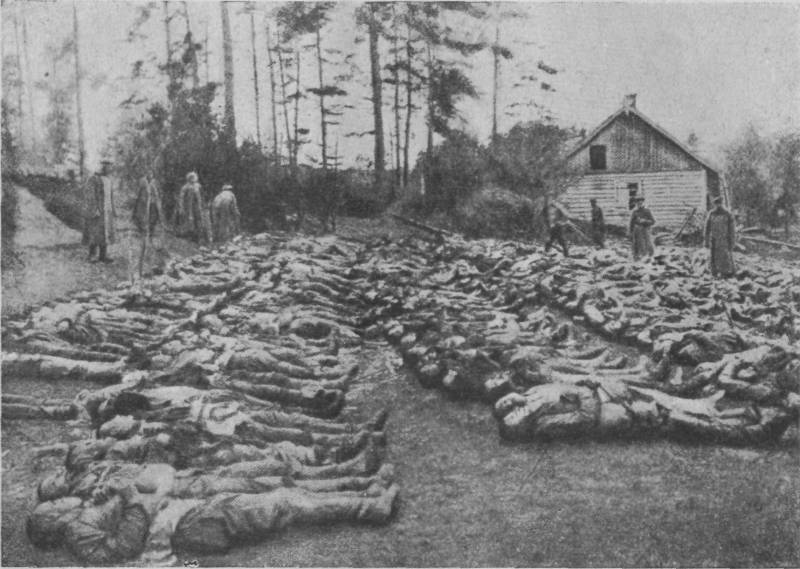 Ikskulya’s gas attack illustrated the great importance for the successful use of chemical weapons has tactical surprise. And how important it is in time to apply the available protective measures and means. Despite the fact that the personnel of the 173 regiment was preparing to repel a gas attack, it suffered seriously enough - 811 people got poisoned and 272 people died.

However, the attack of the enemy was successfully repulsed, and the use of toxic agents to any change in the tactical situation in this sector of the front did not lead. The enemy received a fire response - after the third German gas passage, the Russian heavy artillery struck, breaking several enemy gas cylinders.