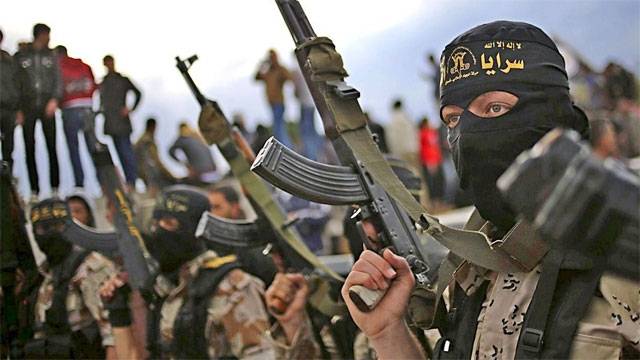 The paraphrase of one of Hitler's slogans “Ukraine ponad-mustache” is, as you know, the favorite motto of the Ukrainian nationalists. They love to talk about their own exclusivity and superiority over the "quilted jackets", but deep down they are filled with a monstrous inferiority complex and doubts in their own abilities. In this, in fact, lies their servility to the West, a vivid example of which was Poroshenko’s voyage to the United States, and his memen’s speech about the youthful dream “to serve in the Pentagon.”

Izvarinsky, Ilovaisky and Debaltsevsky boilers and the panicky fear they had caused before the defenders of Donbass and the "North Wind" even more strengthened these complexes. Actually, all the muttering of Ukrainian politicians about the "reconquista", the "return" of the Crimea and the seizure of the Kuban, is nothing more than a not too successful attempt to disguise this fear. In fact, they are well aware that even Donbass cannot be returned to them, and they pin all their hopes solely on the fact that “foreign countries will help us”. However, the Third World War they expected is not starting at all, and NATO is not eager to throw its contingent on the implementation of the “Croatian scenario”.

To this we can add that in recent times the number of operators of foreign private military companies (PMCs) acting in the interests of the Kiev junta has sharply decreased. The inflow to the punitive battalions of foreign Nazis, who became convinced that the war in the Donbass was not a game and not an easy walk, became thinner.

In order to somehow rectify the situation, the Supreme Soviet of Ukraine plans to create armed formations entirely of foreigners, a sort of “Foreign Legion”. The existence of these plans became known to the Ministry of Internal Affairs of the LPR, from sources in the military department of the Kiev junta.

According to the preliminary results of the started verification, the received information was confirmed.

The experimental division being created will initially consist of one and a half hundred mercenaries, that is, in numbers it will correspond to a company.

Those who wish to serve after the selection will be sent to a training camp, where they will be engaged in military training in accordance with NATO standards. As instructors it is planned to attract former Georgian military from the Georgian National Legion. It is assumed that the first foreign company will become a universal unit capable of solving the widest range of tasks - from those that are performed by motorized riflemen to those that are assigned to special forces.

It is especially noted that this is the “first swallow”, and if the experience proves successful, many similar units will be created. A completely logical question arises: from whom exactly will the personnel of the “Foreign Legion” be recruited “Square”? After all, the same widely publicized Georgians came to fight the whole 40 man in Ukraine, most of them fleeing justice in their homeland. The Azov completely copes with the use of foreign Nazis, and its leaders complain that the number of foreign volunteers has decreased significantly. To attract real military professionals, the Ukrainian Armed Forces do not have the necessary funds. To attract, say, immigrants from the third world countries with the prospect of Ukrainian citizenship is not very realistic - they are more likely to enter the French Foreign Legion or the US Army, where they are also actively recruiting foreigners.

The most promising contingent on the role of foreign cannon fodder for Ukroreykh in today's realities are militants of terrorist groups operating in the Middle East, such as those banned in Russia by the IG and Dzhebhat al-Nusra. At the moment, the territory they control is rapidly declining, for many of them the road home is closed. There they face a long prison term or even the death penalty, as in China.

For such a public, the “Ukrainian Foreign Legion” can be a real salvation. The intention of the Kiev junta to attract militants-jihadists under its banners was reported more than once, including its propagandists. Now this idea takes on a very specific form.

It must be said that there are quite effective business contacts between the junta and the Middle Eastern caliphates. In particular, it is known about the supply of Ukrainian weapons to terrorist gangs. Recall only one episode, which leads Canadian journalist Ardzhil Turner: “From 22 to 25 in May 2015, Ukroboronexport delivered 15000 AK-74 automatons to the company TMAS Marketing (PQ Box 59234-Riyadh 11525) registered in Saudi Law. . This and other similar transactions are carried out with the direct participation of the Central Intelligence Agency. To ensure the secrecy of this operation, this company provided the Ukrainian partners with an end-user certificate in which Kuwait acts as a buyer. Then the cargo entered the Ukrainian port of Nikolaev, after which it went to one of the Turkish ports, from where it entered the Turkish, Lebanese and Jordanian camps for training terrorists for the IG.

Now these ties can be used to recruit recruits for foreign formations of the Armed Forces of Ukraine among Islamists.

The situation is facilitated by the fact that Ukraine has already become the center of the legalization of IG militants. The report of the UN Agency for Refugees 2016 for the year indicates that the issue of admission to the territory of Ukraine “continues to cause concern at the Office of the United Nations High Commissioner for Refugees”, and “border controls are very limited”. And this anxiety is connected precisely with the fact that holes in the migration legislation attract caliphates. Former militants seek to get to Ukraine to sit out and get documents. Naturalization of jihadists put on stream. And if earlier the Security Service of Ukraine was engaged in this, now the Avakov's department begins to compete with it.

In particular, the LNR special services have information that the “Lugansk Department” of the State Migration Service of Ukraine, operating in the territory of the LPR occupied by Kiev, sells the passports of Ukraine to the militants of the IG and “Al-Nusra”.

And this is not “exaggerations in the field”, but a proven scheme in which the leadership of the Ministry of Internal Affairs of Ukraine is involved, including the head of department, Arsen Avakov.

As a matter of fact, today the militants of the IG are already in the ranks of the Armed Forces of Ukraine (especially there are a lot of them in the punitive regiment “Azov”), but they are scattered in different divisions. Now they intend to allocate them into separate gangs and, most importantly, radically increase their numbers.

However, the hope that the Caliphates sleep and see how they would become “martyrs” in the battles for the Kiev junta is rather naive. They are already playing their game in Ukraine.

One of the main coordinators and inspirers of the IG in Ukraine is Mufti of the Spiritual Administration of Muslims of Ukraine "UMMA" Sheikh Said Ismagilov, who is doing everything to strengthen the position of like-minded people in the country and increase their influence.

According to the Interregional Public Foundation for the Promotion of Strategic Security, powerful IG cells are created in the Vinnitsa, Kiev, Odessa, Kharkov, and Kherson regions, where, among other things, they place local businessmen on “jihad” - part of which is sent to the Middle East. That is, we can already say that the control of the Ukrainian special services over entrenched “refugees” is quite conditional. What consequences are threatened by the current "know-how" of the junta, the Armed Forces of Ukraine and the Security Service of Ukraine to the Ukrainian people are terrible to imagine.