The Miracles of Weaponry: Barrel Shotguns

March 3 2012
37
It has long been in the infantry weapons Specialization practice has developed. Machine guns are used for some tasks, machine guns for others, and sniper rifles for others. However, for some time now, fighters of various units had a desire to have weapons with several functions at once. One of the first ways to provide weapons with "multifunctionality" was the grenade launchers. The machine in combination with a grenade launcher allowed to significantly expand the capabilities of an individual soldier. Then complexes like VSK-94 began to appear, allowing the fighter to perform tasks typical of both an assault rifle and a sniper rifle, and much more. 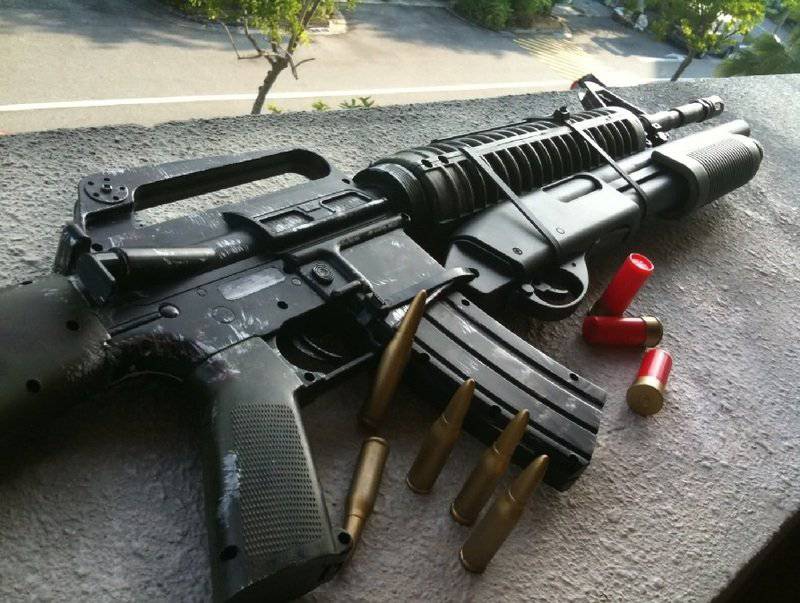 The under-barrel grenade launcher can be considered the forefather of a whole direction: let's call it “an additional weapon”. Theoretically, anything can be installed under the barrel of the machine, only the expediency of this or that option stops. So, the gun mounted on the machine will not be a full-fledged complement for combat work, but a reason for jokes. But you can try to use with a assault rifle a smooth-bore gun. In theory, such an “accessory” will significantly improve the capabilities of a soldier in urban environments or in narrow trenches.

In addition to good performance in narrow spaces, smooth-bore guns, which are also sometimes called shotguns, can also be useful due to the rather wide range of ammunition. Shot, bullets, gas cartridges, electroshock and even fragmentation. And all this for a long time existing and mastered in the production of weapons. But a completely fair question may arise: if shotguns have such advantages, why try to attach them to the machine gun? Indeed, a fighter can be equipped with just a smooth-bore gun. But in some circumstances, such a soldier will become simply useless for his unit: guns are effective only at a relatively short distance, and what will happen if the enemy lands far further? That's right, give the fighter in this case also an automatic. But the machine gun and the shotgun in the form of independent “units” are inconvenient in carrying. It turns out that the installation of a smooth-bore gun on an assault rifle will help to combine the advantages of both types of weapons in one weapon complex. Nevertheless, the gun may be redundant, because most of the tasks of combat and counter-terrorism work can be solved with the help of the actual machine gun with a suitable “body kit”. The second minus of the under-barrel shotgun relates to the balance of the “rifle” complex. A lot of weight, located under the barrel of the machine, requires re-shoot the latter after installing and removing the gun. Such a problem, by the way, is also characteristic of grenade launchers.

After weighing all the pros and cons of the concept of a shotgun, a lot of fighters from various special forces came to the conclusion that such weapons are useful. True, the prevalence of it can not be compared with conventional guns. The idea of ​​attaching a rifle to an assault rifle first appeared in the United States, and in this country there is almost always a supply for every demand. Therefore, the vast majority of grenade launchers are of American origin.

The first representative of the new class was Masterkey from KAC (Knight's Armament Co). As the name implies, this shotgun was designed to become a universal key to all doors, simply knocking them out or damaging locking devices. The basis was taken smooth-bore gun Remington 870. A ten-inch barrel of the 12 caliber was installed on it, a butt with a handle was removed, and a standard bracket was placed on the upper surface of the receiver for mounting on M16 and M4 rifles. All the internal mechanics of the gun remained unchanged. The tubular magazine, as well as the barrel, was shortened and therefore the Masterkey ammunition load is only three 12 / 70 cartridges. It is understood that the under-barrel shotgun is not the main weapon of a fighter and therefore three rounds are enough. If necessary, you can install a standard Remington butt on the “Masterki” and use it as a full-fledged gun, but with a short barrel and a less capacious shop.

KAC Masterkey began to enter the special forces in the middle of the 80-s and immediately became interested in special forces. When storming the enclosed area, a grenade-shotgun with traumatic ammunition made it possible to avoid unnecessary casualties, including among civilians. But the soldiers considered the saved pump-action reloading a disadvantage. Due to the size of the “gun-gun” complex, reloading its under-barrel component was not the easiest and most convenient task. In addition, the Remington store window in the shortened version could not provide a high-speed store equipment. All feedback from the special forces was taken into account by KAC designers and the next model of this company was much more successful.

The second shotgun from Knight's Armament Co was M26 MASS, also known as XM26 LSS. M26 was originally designed as a grenade weapon. Due to this, it was possible to avoid many of the problems of the Master. MASS has a new shorter barrel with a flame arrester that does not protrude beyond the barrel of the M4 rifle, a removable box magazine on the 3 or 5 of 12 / 70 cartridges and an updated trigger mechanism. KAC tried to make M26 self-loading, but they never managed to do it. Therefore, the new shotgun was charged with the handle on the longitudinal sliding gate. For attaching to machine guns, the early M26 had brackets compatible with the old M16 rifle connectors. It is curious that the shotgun could be removed from the machine gun, a special butt with a handle was mounted on it, and the mounting brackets could be used as a sight. Late M26 do not have this capability - the US Army is switching to Picatinny rail, and this standard does not allow the use of fasteners in this way. 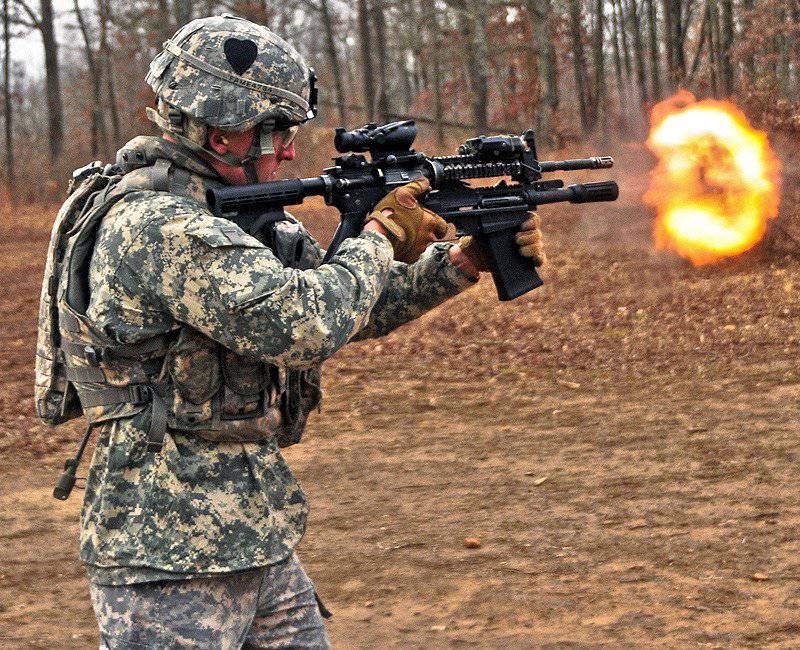 At the beginning of the twenty-first century, the M26 MASS shotgun went into trial operation. The trial lot in 200 instances has proven itself in various situations. Those soldiers who once worked with KAC Masterkey especially appreciated the new rifle. In 2003, MASS first traveled to Afghanistan. There is information that they later used it in Iraq. In 2008, the US Army, based on the results of tests and trial operation, took M26 into service and ordered 35 thousands of new guns. Two years later, the order was increased by twenty thousand.

When M26 was tested, the Australian company Metal Storm, together with the Americans from Colt Defense, began work on their version of the rifle. The Australian company is primarily known for its MetalStorm technology. Its essence lies in the fact that fire control is carried out with the help of electronics, and all ammunition is located in the barrel, at the same time playing the role of the store. The operation of the system looks like this: when you pull the trigger, the electronics of the grenade launcher or a gun ignites the cartridge that is closest to the muzzle. Shot occurs. The next time you press the trigger, a current is fed to the second cartridge, a second shot occurs, and a bullet / grenade knocks the cartridge case from the previous ammunition out of the magazine barrel. The next time you press the trigger, the cycle repeats, but with the third cartridge. As a result, without the use of any mechanics, it is possible to achieve a rate of fire of about five shots in two seconds. A similar scheme was already used by Metal Storm in grenade launchers, and now it migrated into a smooth-bore gun called MAUL. 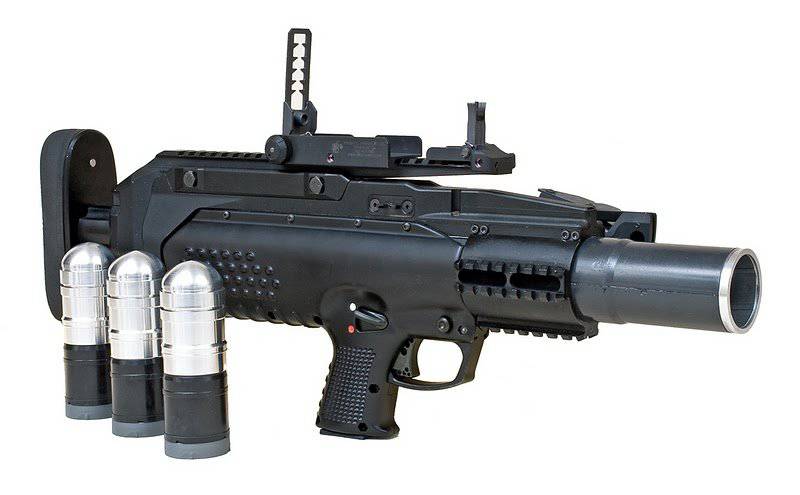 The barrel of this shotgun has an 12 caliber and holds five rounds. Reloading a gun by replacing the barrel-shop. Metal Storm warns that electrical charge initiation does not allow standard cartridges of a suitable caliber to be used in the MAUL shotgun. The power supply of the electric circuit of the gun is carried out from one battery of the CR123 size. Metal Storm produces several types of cartridges for MAUL. Among them are shot, metal and rubber bullets, bullets, tasers, etc. One interchangeable magazine (equipped at the factory) contains ammunition with the same bullets. Like other rifle shotguns, MAUL can be equipped with a pistol grip, butt and sights. 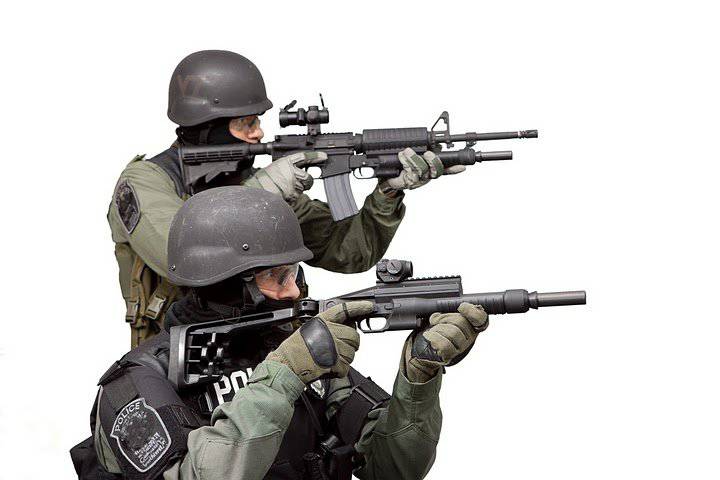 The Australian military showed little interest in Metal Storm MAUL. But Canada has acquired a small number of guns for testing. But the only large consignment of MAUL in 2010 of the year went to the Ministry of Corrections of Papua New Guinea: 500 rifles and 10000 shops of various types.

Finally, it is worth mentioning another model of a rifle grenade, which was not created from scratch, but on the basis of the existing sample. Not so long ago, gunsmiths from the American company Red Jacket Firearms specifically for the Sons Of Guns TV project (broadcast in Russia under the name “Guys with Guns”), the Russian self-loading carbine “Saiga-12” was chosen as the basis for the under-barrel shotgun. The butt was removed from the initial rifle, a shorter barrel was fitted with a brake-compensator, a forearm with four Picatinny slats and a bracket for attachment to the machine gun. The result of the television experiment interested weapon lovers, which is why Red Jacket Firearms had to establish a serial "production" of a rifle-grenade shotgun, which received an RTS-SBS-12 index. The converted Saiga is available on the US civilian arms market. The price of the issue is less than two thousand dollars.

The newly emerging class of weapons in just a few years was able to gain popularity among those for whom it was intended. The first models, as it usually happens, were not entirely successful, but in the future they managed to get rid of most of the shortcomings. As a result of several years of work, it turned out to create a modern look of barrel-mounted shotguns. For obvious reasons, this weapon has a much smaller distribution than the same automatic weapons, but the specificity of its tactical niche does not require millions of copies.