July 7 2017
29
The fraud is an old Russian game, apparently arisen much earlier than the “Potemkin villages”. In reports and reports a lie can be expressed in the form of not only deception, distortion of real data, but also silence. Why is this happening?


In theory, reports of subordinates inform managers about actual performance. Another thing is that in Russia reporting itself turns into the main activity of an official, in comparison with which everything else fades. In the military environment, eyewash is even more dangerous than in civilian life, since it directly threatens people's lives and state security. The slogan “The main thing is not to do it, the main thing is to report!” Is not so harmless.

For example, the regiment commander in the report indicates that all the available equipment is fully operational, complete and combat-ready. The senior manager decides that it is not required to allocate funds for repairs, retrofitting or retirement. However, if the faulty equipment is actually available, then the combat readiness is put at risk - some may not cope with the tasks set, respectively, the plans for the combat use of the interacting military formations will not be fulfilled. Decisions made on the basis of inaccurate information are obviously inadequate to the situation.

There are many reasons for fraud: the desire to curry up and make a career, to comply with the behavior of a certain circle, but the main thing is the fear of punishment, which will follow the truthful report. Moreover, the author of the report is not necessarily himself to blame for the malfunction of technology, unrepaired houses, poor performance. Often there are objective reasons. But from punishment it is still unlikely to save. Therefore, the officials lie. And it is not only the unfair author of the report himself who is to blame for universal lies, but also his superiors, and this kind of practice that has already been around. Getting into the team, a person adopts the rules of behavior that have already been adopted, even if he had previously intended to work solely on his conscience. Life in a bureaucratic management system sets a certain standard of behavior. 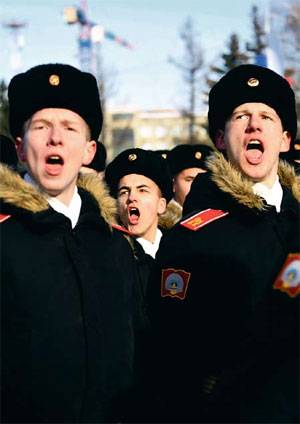 The activity of any boss is evaluated according to certain parameters. Ideally, by the skillful leadership of subordinates. And the assessment should depend on the effectiveness of the activity entrusted to the head of the unit. The main purpose of any military organization is constant readiness to repel enemy aggression, armed protection of the integrity and integrity of their country, as well as performing tasks in accordance with international treaties. It means that according to these criteria it is necessary to evaluate the functioning of any military structure, that is, whether it is ready or not to perform the imputed task.

Similarly, the head of any military organization needs to be assessed: can he complete the task at his post. Consequently, it is the knowledge, skills and abilities of the position, the ability to lead subordinates and should be the main criterion for evaluating a military leader of any rank, and not square drifts and freshly painted lawns on military objects assigned to him.

However, the existing system of inspections of military units is structured in such a way that a remarkably knowledgeable officer of his specialty can still get "unsuccessful" or even be dismissed from service. Thus, during any inspection, the appearance of the personnel, drill techniques, and passage with a song are checked. And if they sang badly, the rest is unimportant. Therefore, the commanders emphasize on the appearance and onward inspection, spending on the grinding of these positions precious watches to the detriment of planned exercises and combat training. In the 21st century, when wars have not been fought for a long time with bayonet attacks and gunfights, the program of combat training of any officer of the internal troops includes the fulfillment of standards from the PM. Moreover, the overall assessment of the professionalism of a person, even if he is an excellent analyst, is not higher than that obtained by shooting. This kind of examples can continue to lead further.

But it's not so bad. The system of socialist competitions that was formed in the Armed Forces back in the USSR with the determination of the best platoon, company, battalion, regiment, brigade is still in effect. According to the results of each period of training, the places among subordinate subdivisions on military discipline, on service of troops, on injuries and other graphs of reports are determined in the orders of senior commanders. Such a system inevitably puts every commander in front of a regrettable fact: how the unit or unit entrusted to you is prepared is not the point;

You can compare the work of the commander of a military unit and not with someone else, but with the results of his work in the same period last year and again find a decline in some indicators. And for this negative dynamic, which spoils the overall reporting, we also criticize him, demand explanations, and raise them at the meetings as the worst. Objective difficulties in explanations are not taken into account, because regardless of them, he must skillfully lead and answer for everything. In fact, the duties of the commander of a military unit are practically impossible to fulfill in full, even with extreme zeal, so that with strict control, there is always something to punish.

How to survive and make a career in such conditions? Most often, commanders try to establish informal relations with their immediate superiors, who also understand that, if they wish, they can always find flaws in the work of their subordinates and punish them. And although there are disadvantages, you can ignore them. At least for the time being, until such a commander falls out of favor. Then in his work, you can instantly find many shortcomings and legally removed as inappropriate to the position held.

Why, in this situation, should the commander himself provoke the senior commander to the negative and show him in the reports absolutely truthful, but hardly informatively perceived at the top information about the shortcomings that can be hidden at his level? Senior managers also arrange rainbow reports, even if it is clear that reporting does not correspond to reality very well. After all, when everything is superb on subordinate parts on paper, this is also a merit of the superior officer himself. And on the basis of the brave reports received from his subordinates he will report upward that he is doing well. And there, you see, you can count on encouragement, on promotion in office ... Yes, there is a lot of pleasant things awaiting a fair officer.

At the same time, the understanding that such an information exchange system is harmful to the military command and combat readiness even in peacetime, not to mention the military one, somehow remains outside the brackets.

Summing up, I consider it necessary to offer my vision on the elimination of fraud in the reports of military leaders.

1. Since the principle of unity of command is very tough in the military environment, it is possible to change the current situation only from above. This requires the political will of the country's top leadership and security agencies.

2. Knowing that biased information is accepted by the boss without any verification, and the truthful one causes a negative reaction, the subordinate will almost always lie. In order to avoid this, it is necessary to build a system for monitoring the objectivity of reports and punish those who submit false reports, and in public.

3. So that the commanders are not afraid to indicate truthful information in reports, it is necessary to reconsider the duties of the main officers of the military unit. First, the functionality needs to be more precisely formulated so that the commander is not responsible for everything. Responsibility should occur only in accordance with the principle of guilt and in the presence of actual possibility to fulfill the prescribed duties. The fear of punishment for objective shortcomings should not induce the commander to lie in reports. Secondly, in determining the duties of commanders, they should take into account their resources. Ideally, carry out calculations of labor costs, taking into account the activities of the daily routine, and compare them with the 40-hour work week. The duties of the main officers of the regiment in the Charter of the internal service of the RF Armed Forces should be considered typical, and the specific ones are developed by the senior commander for each of the commanders.

4. Evaluation criteria for servicemen and especially commanders should be determined on the basis of staffing and official purposes, and not as often practiced: the ability to walk in order and equal snowdrifts by the forces of subordinates.