July 4 2017
16
The administration of Mr. Trump asserts that the meeting of the American President with Vladimir Putin will discuss those topics that the leaders themselves want to talk about. However, the Russians have already come up with "four baskets" of requests and proposals, which the American cannot avoid. 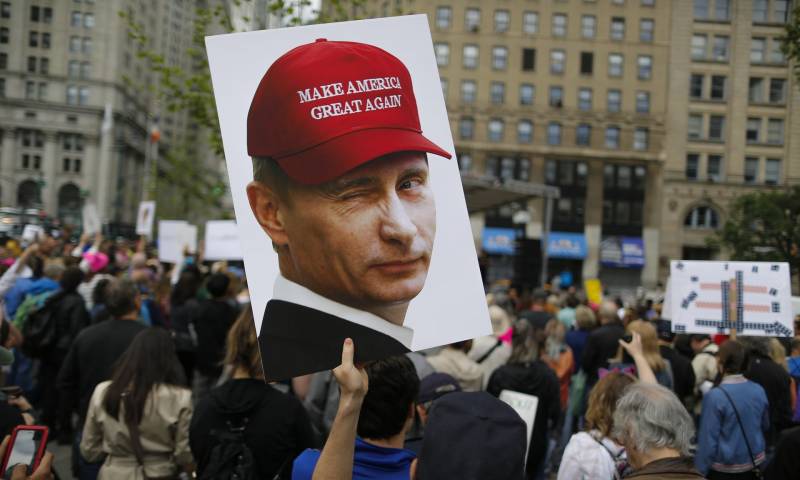 British newspaper journalist «The Guardian» Julian Borger pondered on the likely meeting between Mr. Trump and Mr. Putin at the G20 summit. Reflections written in the form of a content long essay. Select the main thing.

The world is waiting for a signal from the G20 summit, the author believes. The Kremlin "made a bet" on the levers that you can roll in the Oval Office. Is there anything to object to Mr. Trump?

For the first time on the sidelines of the Hamburg summit, Donald Trump and Vladimir Putin will meet as presidents for the first time. However, it is not clear, the journalist notes, whether this is their first meeting at all. Over the past few years, Trump claimed the opposite: he met with Putin and “got on well with him”, he never met him.

The dynamics of the two leaders are important for the entire planet. Here, too, all is not clear. According to popular belief, one of them helped another one to be elected, whose cases are now “investigated” at home.

For a man with a temper temper, Trump has always been sensitive to Putin, the analyst believes. His admiration for his Russian counterpart has never been questioned. But Putin was much more careful. He called Trump "colorful", and this definition in the United States considered a compliment. However, in Russian the adjective “colorful” has both a positive and a negative connotation.

Heather Conley, director of the European Program at the Center for Strategic and International Studies in Washington, believes that the Kremlin "prepared in advance for this meeting." The Kremlin has a file on Trump, and clearly formulated goals.

It is curious that Herbert Raymond McMaster, Trump's national security adviser, told reporters that the meeting would be “free,” “no specific agenda.”

But the Kremlin has an agenda! And Mr Putin “considers the meeting critical for restructuring bilateral relations,” Borger points out.

Maxim Suchkov (Maxim Suchkov), a member of the Russian Council on International Affairs, said that back in March, the Russian Foreign Ministry invited foreign policy experts to develop a brainstorming session on Kremlin requests and proposals. Suchkov noted that Russian diplomats were talking about "four large baskets." These baskets contain regional issues (Ukraine and Syria), the creation of military channels of communication, and economic relations. The largest and most vague of the questions concerns the contours of the international order (how the United States and Russia live peacefully). Also Suchkov said that Moscow has a demand for the immediate return of two Russian diplomatic dachas in Maryland and New York.

Presumably, we add that Russia, with its forthcoming requests on the topic of "economic relations", is simply waiting for easing of the sanctions. However, Mr. Trump probably will not do it. “At home” after such a sanction relief (or rather, the promise of such relaxation) will be met unkindly. The overwhelming majority of congressmen are not only opposed to any easing of sanctions, but are ready to launch extended sanctions related precisely to the fact that the Russians “intervened in the elections”, that is, they practically put Mr Trump himself on the throne. On this issue, the Democrats and Republicans reached a consensus: this showed the latest amicable vote of legislators on new anti-Russian sanctions.