He again “applied” him: the West portrayed Assad as a chemical tyrant

July 3 2017
27
The so-called use of chlorine in Syria by the “Assad army”, as reported by the Western media with reference to local “activists”, is not confirmed. Even for the frames that the “activists” themselves filmed, it is impossible to talk about chlorine. In addition, the Assad accusers are very little like doctors and chemists. They don't even look like cameramen.


26 June Washington "predicted" a new chemical attack in Syria. The blame for the attack was laid before the "Assad regime." In fact, the United States declared the Syrian legal president to be something like a chemical tyrant, constantly poisoning his people. What is the purpose of Assad poisoning its citizens? This is never indicated.

Stating that the Syrian government is preparing a new attack using a chemical weaponsThe US administration warned Bashar Assad that he and his military would "pay a high price" in the event of such an attack. Also in the White House statement said, recalls "Lenta.ru" referring to Reuters that Assad’s intentions are allegedly similar to the April chemical attack in the city of Khan Sheikhun, in response to which Donald Trump ordered to launch a rocket attack on the Shairat airfield used by the Syrian aviation.

27 June became aware of the official Russian reaction to the White House statement.

A spokesman for the Russian president, Dmitry Peskov, noted that the Kremlin does not know on what grounds the White House declares that the Syrian government is preparing a "regular chemical attack."

"We heard about this statement, we do not know what is the basis for this, and, of course, we categorically disagree with the wording" the next attack ", - quoted Peskova "Tape".

In his opinion, which he expressed in an article for RIA News", we are talking about the preparation of this crime "by the terrorists in the American service." The analyst suggests that there will be some kind of massacre that the terrorists "can be proud of among themselves." This crime at the same time "will be used as a pretext for another blow to those who dared not obey the Americans."

“I also think that the matter will not be limited to American tales of the evil Assad, but they will really try to kill someone,” wrote Wasserman.

The Nobel Peace Prize in 2013 was not received by Vladimir Putin or Minister Lavrov, but by the Organization for the Prohibition of Chemical Weapons, the analyst recalls. This organization played a technical role in the export of chemical weapons from Syria. “But this is understandable,” comments Wasserman, “in fact, not to give the Nobel Peace Prize to people who have really done something for the world.”

Why did President Assad harass his people? More precisely, why are Americans so persistently trying to accuse Assad of the use of chemical weapons?

“In general, I must remind you,” Wasserman answers this question, “that most Hollywood films about the struggle of some superman with a super-anti-man come from the fact that the villain does his work simply because he is the embodiment of evil. And if in the detective films one can still find the principle known from Roman times “to whom it is profitable, he did”, then in films about superheroism there is no question of motives ”. From here, the expert concludes: people brought up on Hollywood films would not begin to think about the true motives for the crimes.

On the same day, June 27, the US Permanent Representative to the UN Nikki Haley spoke on Twitter. Reported it "Voice of America". Haley wrote that the blame for any attacks against the civilian population of Syria "will be placed on Assad, as well as on Russia and Iran, who support him in the murder of his own citizens." 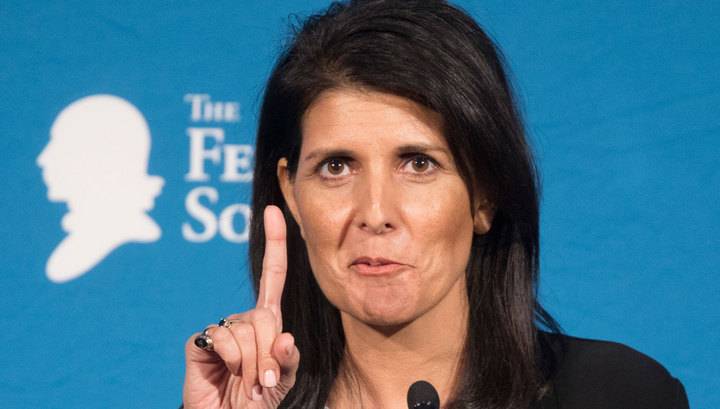 In turn, the representative of the Pentagon Adrian Rankin Galloway led the Voice of America "arguments:" We have observed and are watching the activities at the air base "Shairat", which gives reason to assume that the Syrian regime is once again preparing for the use of chemical weapons. We observed similar activities shortly before the regime implemented himataku on Khan-Sheikhun in April. ” Galloway also said that the Pentagon was aware of the statement by White House spokesman Shaun Spicer that the US had revealed “potential preparation” for himatak even before the information went to the press. (Recall Spicer’s words: “However, if Assad makes another mass attack using chemical weapons, he and his army will pay dearly for this.”)

However, no specific information or evidence of the alleged preparations was provided, notes Voice of America.

Alexander Shumilin, director of the Center for the Analysis of Middle Eastern Conflicts of the United States and Canada Institute, in an interview with Voice of America, said that such attacks to the Syrian regime are disadvantageous: "It is clear that the political regime of the Syrian regime is not profitable."

Commenting on Nikki Haley’s statement about blaming Assad, Russia and Iran, Shumilin said that Russia's political leadership would like to avoid open confrontation with the United States in Syria, but the military is ready for confrontation: “Now the Russian generals are especially angry at the Americans for that they damaged their prestige by the military operations that were carried out against the Syrian army. "

Nikolai Kozhanov, an employee of the Russian-Eurasian Chatham House program, finds it difficult to say how justified Washington’s concerns are about the use of chemical weapons by Damascus.

“In principle, almost all previous cases of himatak in Syria somehow remained unanswered: who actually organized them ... Both the Assad regime and its opponents had the opportunity to do it, but no one provided evidence of their innocence or innocence” .

1 and 2 in July, the world's media told about the video on the network, where "activists" show the "victims" of a chemical attack in Syria. The source of the “information” was the “representative of the Syrian opposition”, who used Twitter to post the video. As this man pointed out, a chemical attack took place in Damascus. From the cadres, however, it can be seen that the "victims" in oxygen masks do not have signs of damage called toxic substances. 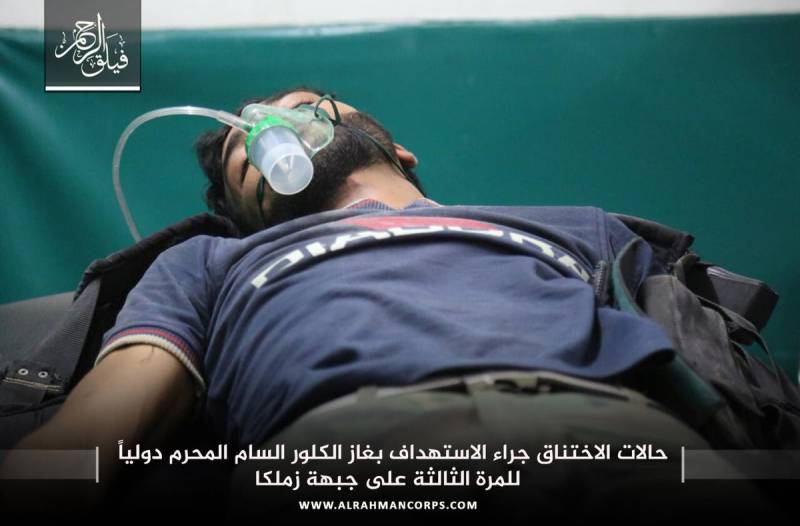 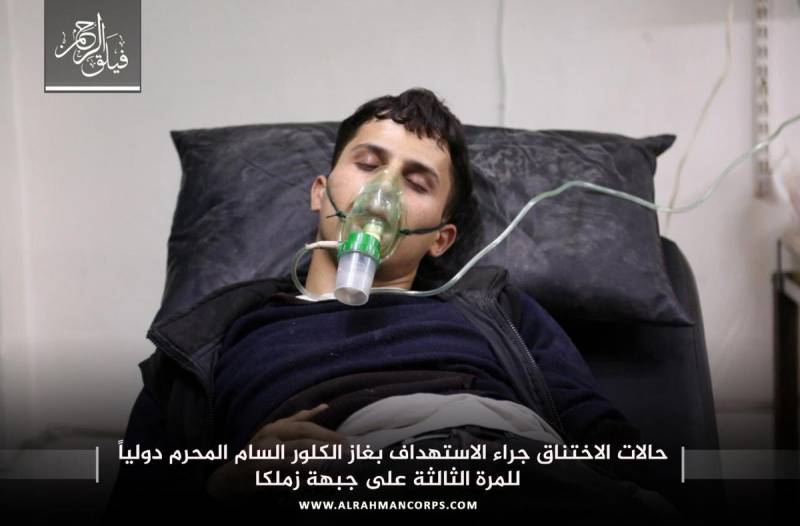 In a video on Twitter, activists talk about the use of chlorine, a gas that affects the respiratory tract. The victims of the "new" attack are young, strong men. They lie with closed eyes on the couches. They have no convulsions, the complexion is healthy, there is no spasmodic cough, there is no foam in the mouth either, the newspaper notes "Sight".

The publication writes that the author of the video, apparently, being neither a doctor nor an expert, is sure that the “victims” were poisoned by chlorine.

Maria Zakharova, a spokeswoman for the Russian Foreign Ministry, wrote on Facebook that “an information and propaganda campaign has begun about“ the use of Damascus chemical weapons ”. According to her, this kind of clips "will be more and more, they will be different in quality of performance - and such low-grade ones like this one and of Hollywood level."

Earlier, at a briefing, Zakharov warned of impending attempts by militants to fake the use of chemical weapons by the Syrian government army in order to provoke new strikes by the United States on Syrian military facilities. At the same time, Sergei Lavrov said that Moscow would respond proportionately to provocations against Damascus by the United States.

Military expert, head of the department of political science and sociology of the PRUE. Plekhanov Andrei Koshkin noted earlier that Washington is preparing public opinion, creating a political indulgence on the use of force in Syria.

According to Ivan Konovalov, Director of the Center for Strategic Market Studies, who Gazeta.ruThe situation with the accusations against Damascus testifies to the “uncompromising behavior” of the United States in the international arena. There are no secret intelligence reports indicating that Damascus was preparing for himatake against its own citizens, the United States does not.

Official Damascus has already responded to the “absentee” accusations of Washington.

In response to the accusations of “activists” of chlorin poisoning in Ain et Terme thirty militants, the command of the SAR army denied the “information”, calling it slander and falsehood.

Statement of the representative of the command of the AF SAR cites TV "NTV" with reference to “SANA”: “The reports on this subject were fabricated and absolutely groundless. Terrorist groups deliberately spread this deliberate lie in order to justify the defeat they bear in certain Syrian areas. The command of the Syrian armed forces, refuting these slanderous statements, stresses that the Syrian army has never used chemical weapons against bandit formations in the past and will not do so now because it does not possess chemical warheads. ”

New accusations against President Assad are needed by Western leaders to justify intervention and increase their own political weight, said Reedus Director of the Foundation for the Study of Democracy, Candidate of Political Sciences, member of the Public Chamber of the Russian Federation Maxim Grigoriev.

According to the expert, attacks on the Assad government for the United States and in general for Western countries are a matter of image. “This kind of informational attacks are quite unpleasant for the Assad government, therefore, we can expect the continuation of these provocations with the participation of any organizations such as“ White Helmets ”, who shoot absolutely staged videos similar to the situation in the Syrian city of Khan-Sheikhun,” Grigoriev said.

It seems, we add, ideologists, screenwriters and directors of production videos are no longer obstructed even by the smallest credibility of the shooting. If only to remove something that would be a pretext. It is not surprising that US intelligence experts are silent, and politicians make belligerent speeches. More precisely, not the politicians themselves, but their attendants, "talking heads" - the press secretary of the White House, the permanent representative to the UN.

More recently, in Khan-Sheikhun a whole dramatization was arranged with the children, which influenced Trump's impressionable daughter and allegedly on Trump himself. Obviously, the event went off with a bang, "Tomahawks" were released, and now the militants have decided not to try especially. And why? After all, the Americans announced the himataks in advance — and they also accused Assad, the Iranians and Russians in advance!

It is clear that Washington is preparing to unleash a real war in Syria, whose first task will be the destruction of the "chemical tyrant".