From exit to exit

July 2 2017
26
Meanwhile, the openly weak positions of the Bolsheviks at the First All-Russian Congress of Soviets of Workers 'and Soldiers' Deputies did not in any way foreshadow their deafening victory at the Second Congress, timed to coincide with the October armed coup. “There is such a party!” - once these Lenin words everyone should have known. And every real Communist should also know, and where Ilyich said them. And it happened exactly at the I Congress of Soviets in June 1917. 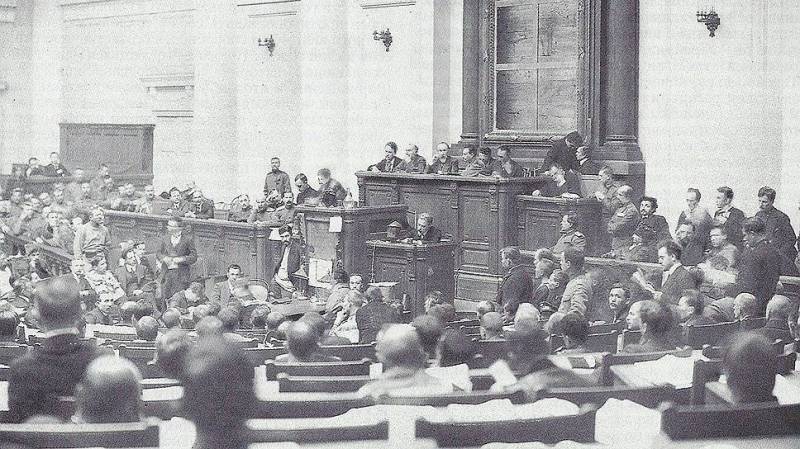 This congress, which took place almost immediately after the same "All-Russian" Congress of Peasants' Deputies, managed to convene with genuine difficulty. And this is despite the fact that the first months after the overthrow of the monarchy were in Russia, according to Pavel Milyukov’s testimony, “the time of continuous congresses, meetings and meetings”. Left parties, which in the Soviets, unlike the government, had almost complete predominance, it was extremely necessary to ensure the present representation of all the provinces, fronts and fleets. This was achieved largely thanks to the fact that the Social Revolutionaries and Mensheviks had been conducting extensive propaganda work not only in the capitals, but also on the periphery, and the Bolsheviks, popular primarily among the factory proletariat, had also gained considerable confidence and in the army.

Elections for the First Congress of the Councils quickly passed throughout the former empire. At the congress, according to the statistics of that time, more than 20 million people, including more than 5 million workers and 8 million soldiers and sailors, almost 4,5 million peasants, were somehow represented. At the same time, instead of the expected 1200-1500 delegates, only 1090 gathered in the Tauride Palace of Petrograd, of which only 822 had the decisive vote. Among them are the total 105 Bolsheviks in the 285 Socialist Revolutionaries and the 248 Mensheviks.

However, much more important than the party composition turned out to be different. At that moment, an acute crisis was brewing in Petrograd, and not only a political one. Interruptions in bread and food were almost the norm, and the financial system disintegrated like a house of cards, despite the constant inflow of currency from France and the UK to "support an ally."

A wave of strikes and strikes was about to threaten to turn into a complete economic collapse, and an increasingly left-wing composition, but the “right”, in fact, the Provisional Government was preparing an offensive on the front. Although there was no real need for it.

But the absolutely “left” I Congress, chaired by the absolutely imperturbable chairman of the Petrograd Soviet Menshevik N. Chkheidze, as if unaware of the situation, immediately engaged in agreeing on and adopting various kinds of non-binding, but beautifully sounding resolutions. The attitude to the government, the impending offensive, the convocation of the Constituent Assembly were generally only mentioned in reports and debates. If the peasant congress at least indicated its position on the agrarian question, then at the congress of workers and soldiers' deputies the matter, alas, was limited to ... the work of the specialized agrarian section. But quite specifically and a lot was said about power, although the theses were constantly being sounded that there was really no one to take it. Even raspiarenno inStories The CPSU’s statement by the Bolshevik leader Ulyanov-Lenin that the party he leads is ready to take this very power, at first, few people heard.

It is noteworthy that at the First All-Russian Congress of the same Soviets, Lenin managed to announce twice the possibility of a peaceful transfer of power from the Provisional Government to the Soviets - 4 and 9 of June. It seems that the second time he was still heard.

At least from among those who really needed it. Otherwise, it is difficult to explain all the rage with which the Bolsheviks immediately collapsed, almost collapsing, but still on something capable of the state apparatus.

The intentions of the Bolsheviks, who received more and more local support during the congress, became clear a little later. After a powerful anti-war demonstration in Petrograd, which occurred during the days of the congress and immediately became anti-government, the popularity of the RSDLP (B) sharply increased. The fact that the Bolsheviks managed to organize the demonstration of the masses so that there was no blood could not fail to impress. Blood will be shed later - in July. In the meantime, the intelligible slogans of the Bolsheviks against the war and against the capitalist ministers, for the power of the Soviets, as well as their readiness to fully accept the clear and unambiguous agrarian program of the Social Revolutionaries, have done their work.

More recently, Lenin’s party, which, because of this, was often compared to a sect, was already before, and then during, and after the I Congress of Soviets, more and more former émigrés from the number of “professional” revolutionaries, such as Trotsky and far from numerous comrades. The Bolsheviks, in something unexpected for themselves, became more and more allies - both from the left wing of the Socialist Revolutionary Party (AKP), and from among the Mensheviks, first of all - the internationalists.

One cannot but admit that the I Congress of Soviets itself turned out to be practically ineffectual, if, of course, we do not consider that the “technology of electing delegates” of the following All-Russian congresses had been worked out. He also stretched out indecently - from 3 to 24 June. The Tavrichesky Palace was constantly filled by alternating deputies, candidates, journalists and observers from the field and from abroad, as well as various “representatives” with mandates from parties, from the government, from various professional associations, national congresses or religious denominations. It is not surprising that, collecting 17 in October for the second Congress of Workers 'and Soldiers' Deputies, its organizers immediately rushed to limit the terms of its work to three days - from 25 to October 27. The venue has also changed - instead of the Tauride Palace, the Smolny Institute, which has already become a real “red” headquarters.

However, it was the I Congress that initiated the progressive movement to seize power of the Soviets of workers and soldiers, and after him and joined them after the II congress of peasant deputies.

This progress was halted only because of the notorious bloody events of July, for which the Provisional Government hastened to lay the blame on the Bolsheviks. However, the fact that Ulyanov-Lenin went into the underground together with several comrades-in-arms was often regarded by many historians as a kind of recognition by the Bolsheviks of a considerable amount of this guilt.

It is very characteristic that in those times, when various congresses were convened almost daily, the Bolsheviks managed very well to sustain the pause between the first and second Congresses of Soviets. At this time, Lenin from the underground, together with his legal fellow workers, very criticized the notorious Pre-Parliament and the Moscow Democratic Conference that preceded it, also, of course, the All-Russian. But when it was necessary to assemble the Red Guard and to repel Kornilov, they acted clearly, without unnecessary talker, and extremely tough. And here the Bolsheviks did not make any pause and did not wait when Kerensky, as head of the Provisional Government, which the workers' detachments actually came out to defend, will determine whether "with whom he is with Kornilov or with the people."

As a result, Kerensky was aroused by the complete loss of confidence both in him personally and in the entire composition of the Provisional Government. From reading the memoirs of that era, and authors with very different convictions, it seems that the comrades and fellow travelers of the Bolsheviks from among the same “left” criticized Lenin, Trotsky and others like them during the October events, and according to the results of them where fierce, rather than representatives of the "right" and even more so, monarchical circles. For the latter, the advancement of the Social Democrats, who suddenly became not just Bolsheviks, but Communists, was generally a surprise - they were much more afraid of the popular Social Revolutionaries. But the "right" to the late autumn of 1917, it seems, generally fell into a kind of stupor from their own powerlessness and passive waiting for elections to the long-awaited Constituent Assembly. After which, many considered, everything would somehow improve by itself ...