Mortars of the First World War

July 6 2017
14
World War 1914-1918 brought to the fore the new species weapons. Among them is a mortar. Although in its essence the mortar is a fairly primitive tool (as if kulevrin and unicorns having emerged from the era), but with the use of powerful ammunition and appropriate tactics it took a prominent place in the arsenal of the participating armies of the conflict.


Especially valuable were the properties of the mortar at the positional stage of the war.

The conditions of positional warfare made it possible to abandon the most expensive quality of artillery guns - long-range. The task to produce significant damage at close distances and inflict a strong defeat by mounted fire and created a fertile ground for the use of mortars.

Conscious rejection of the range, coupled with the insignificance of the initial velocity of the projectile, made it possible to significantly reduce the charge, which in turn was associated with a decrease in the pressure of the powder gases inside the bore of the mortar. This allowed to reduce the thickness of the walls of the latter, and also reduced the recoil force when fired. Hence the amazing lightness of mortar weapons.

A small amount of pressure in the canal of the gun and a small initial velocity allowed a significant increase in the weight of the explosive charge of the mine due to its strength. Many types of mines were put into the mortar barrel with their tail. On the one hand, this made it possible, with regard to the strength of the projectile, to reckon only with its initial speed, and, without fear of breaking the projectile at the barrel of the gun, to bring its wall thickness to a minimum. On the other hand, it allowed to significantly increase the caliber of the projectile.

The German army was an innovator in the use of mortars - as early as 1914, it had 44 heavy and 116 light mortars in its arsenal. During the war, 170 and 250-mm systems were used most effectively. 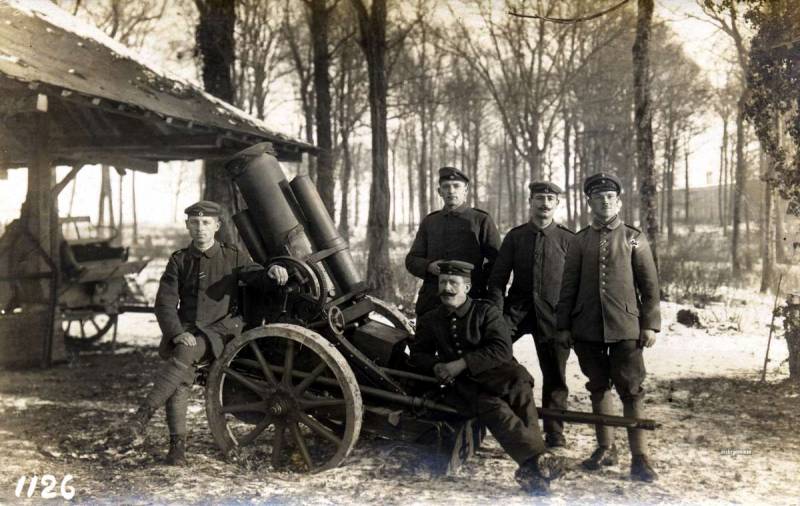 Assessing the advantages of the German trench artillery, the French began to improvise. The first French models of mortar weapons were very primitive (in many respects they repeated the experience of the Russian army at Port Arthur).

The French adapted old smooth-bore mortars and mountain tools intended for firing bombs and mines for trench shooting. Special samples of mortars appeared, but, considering the French craving for a maneuverable war, they were somewhat late.

The Russian army, which had a trench experience of the Russo-Japanese War, already by 1914-th year had the first samples of the domestic trench artillery. 6-inch (152-mm) heavy mortars of the model 1915 of the year (two systems - Putilov and Petrograd metal plants) were used.

But the front demanded lighter and more compact systems.

This led to the appearance of F. R. 58-type mortars on a wooden machine (total weight - 170 kg), the same mortar, but on an iron machine of the Nevsky Plant (weight of the 250 kg system) and on an iron machine of Izhorsky Plant (weight 235 kg ). All these samples fired different types of steel and cast iron mines, the maximum range of the shot, depending on the type of projectile (maximum weight - up to 40 kg), was 535 - 1120 steps.

Of light mortars, extremely lightweight 47-mm mortar of the Lichonin system is widespread. With a weight of 90 kg, he had considerable power, sending 25-kg shells (almost half of the weight is explosive) to a distance of 600-t steps.

The most important advantage of the mortar was that its projectiles flying along a howitzer trajectory had tremendous destructive power. Accordingly, the value of the mortar in the fight for the fortified bands is difficult to overestimate. Russian instructions from the time of positional war equated the effect of Lichonin's 47-mm mortars and 58-mm mortars to 48-linear (122-mm) and even 6-inch (152-mm) howitzers. It was stated that the strength of heavy mortars (89-mm and 9,45-dm (240-mm) English) exceeds the force of the 6-inch howitzer.

The strength of the explosive action of mortars was confirmed by the size of the craters they make. With the same caliber of shells, mortars produced more destruction than ranged weapons. Moreover, being a cheaper weapon and demanding less qualification for its calculation, the mortar spent less resources on the destruction of the fortification than the artillery gun. In addition, mortars easily destroyed and wire barriers, which were so difficult to give to light field implements.

In addition to the high-explosive action, mortars were also a good means of defeating enemy fighters. Moreover, the projectile falling at a large angle at a rupture yielded a significant number of small fragments with very high initial velocities, but very quickly losing them, and therefore not dangerous for their troops. Such a projectile incapacitated many enemy soldiers at the front line. Incidentally, the use of mortar weapons led to the "emptiness" of the front edge - only observers and sentries remained in the forward trenches. It was precisely mortars of medium and small calibers that were used to systematically weaken the enemy, inflicting losses on people through the so-called “disturbing” fire.

Another characteristic property of mortars was the increased steepness of the trajectory of fire, which made it possible to conduct not only mounted shooting, but even vertical. About the value of this property can not speak.

Possessing an exceptional steepness trajectory, some types of mortars at the same time were capable of flat shooting, which was also a very valuable feature of these weapons.

The main drawback of mortars was the extremely small range of fire (within 1-1,5 km). In a trench war, the struggle on the front line is enough, but no more. Moreover, with such a rapprochement with the enemy, the possibility of crushing the mortar with the enemy’s artillery was minimized - she was afraid to hit her own.

Another significant drawback of mortars is the slowness of their shooting — he is tolerant in a positional struggle, but when attacking or repelling an attack, he made himself feel very badly.

Of the constructive properties of a mortar, the tactical value had the simplicity of its device, making it possible to quickly assimilate methods of firing and care for these weapons, as well as allowing its repair by improvised means.

And the low cost of making mortars and saving gunpowder when shooting was of great importance. So, compared to a howitzer, a mortar gave 95% gunpower savings — a terrific figure!

If we talk about the tactics of the use of mortar weapons, it is necessary to note the following.

During a positional war and during periods of operational pause, the main task of the mortars was the constant and methodical shelling of enemy positions - at the limits of their range. Light and medium mortars were used primarily for inflicting casualties and destruction of trenches, and heavy mortars were used for fortifications.

The destruction of the enemy's strong fortifications (strongholds, fox holes, etc.) required the massive use of mortars. For this they were reduced to special groups. The participation of mortars in artillery preparation also released a significant amount of artillery, which was assigned other tasks.

The so-called mortar preparation is a very effective fire weapon.

In the period of the Gorlitsky breakthrough in April 1915, for example, the mortar training of the Germans supplemented the artillery preparation, while during the assault on Peremyshl in May 1915, the heavy mortars operated independently. But in any case, the mortar groups were supposed to work under the cover of artillery - this created the appearance of firing only heavy artillery batteries, and the actual mortars (due to proximity to the front line they were easier to hit) did not attract the attention of the enemy.

Mortars were used in the conduct of the so-called barrage fire - that is what the German military instructions recommended. This was very important - thanks to the large steepness of the trajectory, accuracy of mortar firing, as well as the safety of mortar fire for its advancing infantry. The moral impact of mines on the defender during the attack was very strong.

Thus, the mortars accompanied the infantry.
If the appearance of field artillery guns in the area of ​​attack could have grave consequences for the gunners, the mortar moved with the infantry - often imperceptibly. Moreover, it was thanks to the mortar that the idea of ​​a rolling barrage began.

In the conditions of the enemy's echeloned defense, when some strongholds in its rear were not destroyed and continued to resist, they were captured by infantry with the assistance of escort mortars.

Thus, during the preparation and execution of the breakthrough operations, mortars played an active role — they took part in the destruction of artificial obstacles and trench structures of the enemy fortified strip, participated in the organization of a mobile barrage, and then moved forward along with the attacking infantry, crushing the surviving resistance nodes along the way. the adversary.

In the defense of the fortified strip, mortars also performed important tasks. They carried out a counter-battery struggle and fired in order to inflict losses on the enemy in humans.

The participation of mortars in the barrage fire was especially important, since, given the steepness of their shooting trajectory, they could fire on areas inaccessible to light artillery fire.

Due to the direct service of infantry mortars and constant combat work in its combat formations, at the end of the war the Germans took the path of including mortar tactical units in the infantry regiment - with their direct submission to the regimental commander.

Due to the small range of mortars, they had a limited range of position selection - the most optimal location for Russian mortars was the trenches of infantry supports (that is, the nearest reserves). The positions of the mortars were camouflaged (bushes, deep folds of the terrain), since the mine (unlike the projectile) was visible almost all the time of the flight - and this greatly facilitated the enemy's determination of the location of the actual mortar. 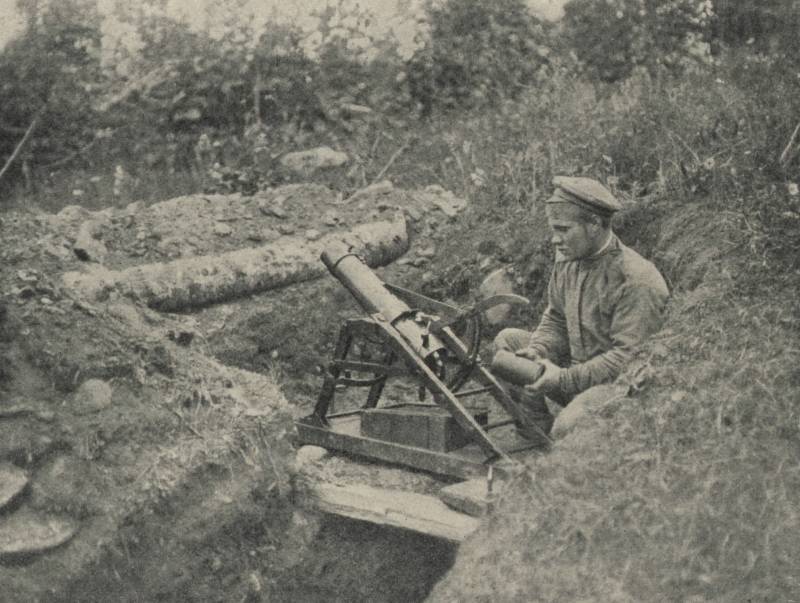 Russian mortar on the front.

The following fact testifies to how great - not only tactical, but also operational - the value of a mortar could have.

With the victorious offensive of the Allies on the French front, which began in the 2 of July 1918, the German strongholds were the main obstacle to the offensive of the Allied forces: the Allies could not bypass some of them, since they were very skillful and interconnected that is, they represented a single firing system. Occupied by the weak forces of the Germans, they detained the allies not only for several days, but also for whole weeks. If the battle formations of the Anglo-French troops were adequately saturated with mortars, the speed of the attack, and, accordingly, the outcome and result of the operation (including the extent of the enemy's defeat) could have been completely different.