Astrakhan Cossacks on the fronts of the First World War. 6 part

July 4 2017
4
In August, in addition to the tasks addressed by the Astrakhan Cossacks, one more was added. 1 August at one o'clock 3-I hundred urgently was called to the position to restore order and collect enemy infantry units scattered by artillery fire. In 3 hours the order has been restored. On August 14, the 3-th hundred also was called to the position at der. Beetles - Novo-Troki - again to restore order.

The security, ordinary, police service, the provision of volatile mail, headquarters, flanks of units and formations began again. And, of course, intelligence and intelligence again. Cossack patrols illuminated the terrain and were eyes and ears of combined-arms commanders. For example, on August 13, 4-s patrols hundreds, found the enemy, having crossed the river. Vilyu [ibid. L. 10].

This activity continued in the fall.
4 September The 5 Army Corps was deployed on the right flank of the 10 Army - to the town of Soly, where, on 10 September, it fought with the Germans, bypassing the right flank and rear of the army. Subsequently, the corps entered the 2 Army and acted on its right flank. It was the 2 Army that decided the outcome of the September battles of the Vilna operation in favor of the Russian weapons.

The Cossack patrols guarded the right flank of the 7 Infantry Division, also engaged in service at the stage, escorted the prisoners, escorted the marching teams, covered the wagon train, guarded the bridges, and collected the soldiers who had strayed from the units.

Of particular importance for the Astrakhan Cossacks was the protection of the divisional headquarters (7 and 10 infantry) and corps (5 army), and intelligence. Intelligence was carried out in the interests of military formations of any level - from the regiment to the corps headquarters. Of great importance, for example, was the activity of Ensign Kazantsev (traveling to 12 people), who carried out reconnaissance of roads and crossings across the r. Vileyka. There were also active patrols of Ensign Terpugov, Contractor of Services (4-I hundred) and Ensign Sivolobov (3-I hundred).

The activity of the Astrakhan Cossack patrols led to a heroic battle episode - on September 15 near the village of Zaozerje, a policeman Volkov rushed to the attack on the German outpost and, after a break, some Germans, captured three [RGVIA. F. 5265. Op. 1. D. 7. L. 8].

From the autumn of 1915, the regiment service was connected with the front near Lake Naroch. The 4 th hundred in the 7 th Infantry Division 5 of October was even given a combat sector from the lake. Zanaroch to r. Zanaroch. Moreover, a hundred infantry company was attached.

On October 22, from 2, the hundreds were sent to the regimental headquarters for appointment to the consolidated hundred, intended to meet the Emperor.

Due to the freezing of the lake. Naroch 1 November, the 4-i hundred with 2-rotated Mogilev infantry regiment with a searchlight under the command of the commander of the 4-nd hundreds of Esaul Stankovic took the trenches from the village. Zanaroche to the mouth of the river Naroch.

And with 10. 11. 1915 on 20. 01. 1916, the corps was in the army reserve. Corps cavalry - 2-th Astrakhan Cossack regiment - performed the same tasks: carrying guard duty, maintaining communication (for example, 3-I hundred were at the headquarters of 5-th army corps, responsible for communication with the army headquarters and with 4-m and 27- m army corps), the protection of artillery, etc.

Service during the winter campaign 1915 / 1916. was marked by an important event for the regiment: November 23, 1-I hundred was appointed to the Supreme Review, and under the command of Esaula Kolpakova left B.Uzly to Gorydovichi (December 23). To hundreds were given the St. George Knights of the other hundreds. And on December 14, in the 2-th hundred regiment, weapons were examined by General Nekrasov.

Thus, during the 1915 campaign, the 2 regiment as a military cavalry of the 5 corps was engaged in reconnaissance, guarding the flanks of the infantry units of the formations, staffs and communications, flying mail, covering the units and formations. The Cossacks provided the joints between the units, carried out the containment of the enemy, carried the military-police service, stood on the positions.

The activities of the regiment were associated with Poland (the battle near the village of Davia, the Narev operation) and Belarus (the Naroch operation of September 1915). 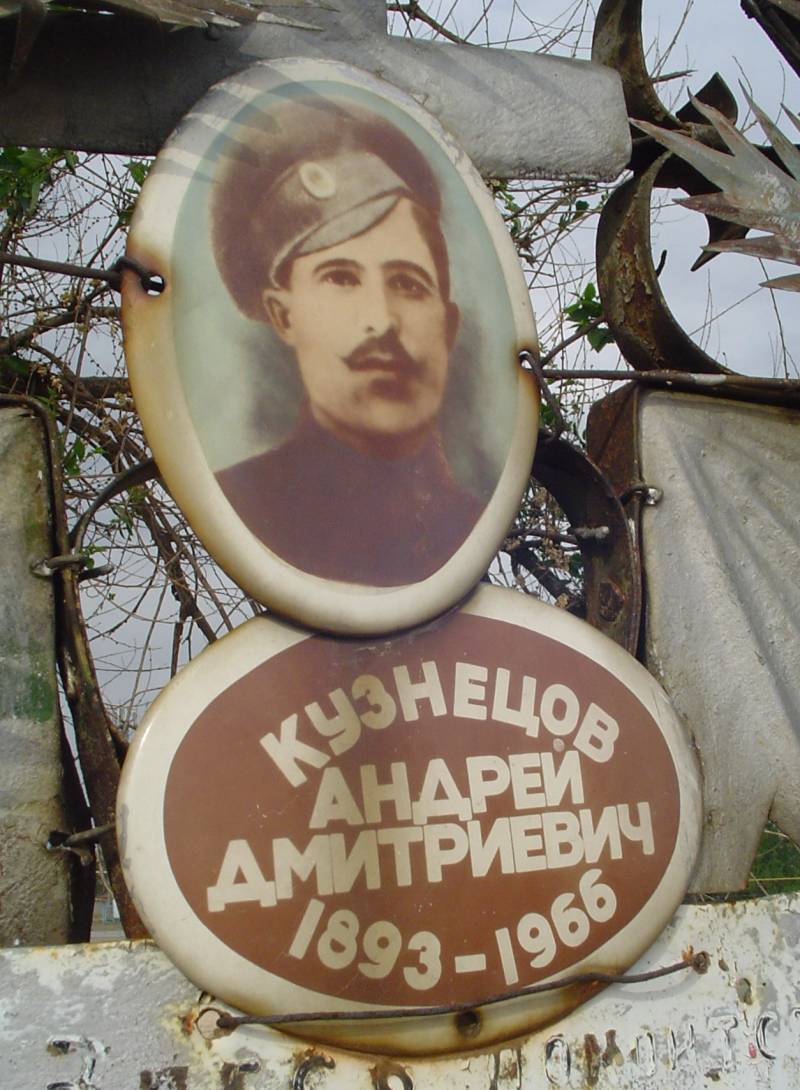 The Astrakhan regiment had the opportunity to participate in the 5 - 17 March operation of the Northern and Western Fronts 1916.

The Astrakhan Cossacks fell to ensure the actions of the main "birthday man" of the operation - the 5 th army corps and its 7 th and 10 th divisions.

March 6 The 5 Corps occupied positions between the Lakes. Naroch and Vishnevskoye - on this day, patrols from hundreds evacuated the wounded soldiers of the corps (800 people).

After the success of the breakthrough, the regimental commander received an order to move at the disposal of the chief of the 7 Infantry Division to pursue the retreating enemy. The task of the regiment is to advance to the village of Pronki. Arriving 2 in hundreds to the trenches occupied by the 27 infantry regiment of Vitebsk, under enemy artillery and rifle fire, the 1 hundred advanced to the southwest of the church in the village of Bizniki, and the squad of 3 hundreds went to the courtyard of Augustus . Cossacks moved by lava. To clarify the situation on the left flank of the 27 Infantry Regiment, 2 reconnaissance groups (commanders, the centurion Biryulkin and Ensign Sivolobov) acted, finding the Germans fortified position. After that, the 1-th hundred were ordered to guard the left flank of the 27-th infantry regiment, and the 3-th one hundred to move to the coppice east of the village of Zanaroche. The departure of the cornet Terpugov and a platoon of 3, hundreds of Ensign Orlov, carried out reconnaissance and observation.

On 8 March, 5 Cossacks were contused, killed 3 horses and injured 7.

15 April - on 14 hours 30 minutes 1-I and 3-I hundreds of Astrakhan led by the regimental commander were alerted. Immediately the officers were deported (Ensign Belousov, 12 people) and the sergeant Volkoff (15 people) with the task of collecting soldiers who had fled because of the hurricane fire of the German artillery in the Vishnevskoye - Naroch area. Under heavy enemy fire patrols performed the task.

On the same day, the 1-th fifty of the 3-th hundreds went to the cover of the 6-th battery of the 10-th artillery brigade in the area of ​​the Naroch-Blood lakes. For the protection of batteries and surveillance, a special outpost was set up and communication was established with the Yekaterinburg and Nizhny Novgorod infantry regiments.

On April 18, the Cossacks of the 3, hundreds, were under German artillery fire - on this day, there were massive contusions on the regiment. Villagers and gas attack. And although there was no loss due to the competent use of gas masks, but there were tears, headaches and vomiting.

2 th regiment in May - June 1916 also performed the usual tasks of divisional and corps cavalry. May 27, Corps Commander General of Infantry P. Baluev conducted a review of the 2, 3 and 4 of the hundreds of regiments.

In view of the transfer of the corps to the South-Western Front, on June 12, the echelons of the Astrakhan regiment moved to the loading station Krivichi. And here on June 13 at 9 in the morning hours the 2 th echelon of the regiment was bombarded by German airplanes [RGVIA. F.5265. Op. 1. D.22. L. 4-5]. The Cossack I. Shcherbakov was killed, the Cossacks 3, 2 and 4 hundreds were wounded and contusions — N. Maletin, S. Shein and A. Kichikov, respectively. The troubles of the regiment's trains did not end there - the 16 of the same train 3 of June for some unknown reason went off the rails for st. Shepetovka. Fortunately, the cars were with property and horses - only one Cossack received light bruises.

The Astrakhan regiment met the 1916 summer campaign again in the 5 Army Corps. On July 1, the regiment was deployed as an 6 hundredth unit. In addition to solving everyday tasks, the summer offensive of the Russian army led to the participation of Astrakhan in a field battle - near the colony Green.

On July 8, the regiment was assigned an active task - to move through the ferry from the village of Lipa, having sent a reconnaissance hundred in Smolyava. The 2 guns of the 7 Infantry Division were attached to Astrakhans as a fire means of support.

8 July - fight at stake. Green During this day, hundreds of 23 prisoners and 16 rifles were captured [RGVIA. F. 5265. Op. 1. D. 23. L. 5]. Interestingly, one of the sidings seized 2 German heavy guns. They could have become the most valuable trophy of Astrakhan in a world war, but, unfortunately, they failed to take out the guns - the dirt and the lack of people did not allow them to be evacuated to the rear. And when a sufficient number of people arrived, the Germans had already prevented their removal from their fire.

In August, a trench warfare began, and on August 10th, the regiment under the command of Esaul Stankovic took up the position and replaced the infantry in the area from the Krasov village to the cape (near Elizarov). On these relatively quiet days for the Cossacks, they watched over the enemy and prevented him from doing trench works. Cossack secrets and patrols were pushed to the p. Nameless. Intelligence groups of Astrakhan regularly guarded the enemy to capture his secrets and intelligence officers. But the German intelligence officers were inactive, the secrets were sitting at the wire barriers. The marshy ground did not allow to sneak up to the positions of the enemy silently.

On September 12, the dismounted Astrakhan Cossacks were replaced by the Orenburg walking division.

On September 19, the main forces of the regiment returned to their positions. Their stay was reduced to a rifle exchange with the enemy (sometimes he fired explosive bullets), the German artillery bombarded the Cossack trenches. But, with the exception of light contusions, there was no loss in people. In front of the trenches, the village officials exposed 8 secrets from every hundred (people changed in them in 2-3 hours), patrols, reconnaissance groups were sent, the area was lit up with rockets.

On the night of October 13, the Astrakhans were replaced by the Yekaterinburg Infantry Regiment 37. By the end of October, the main forces of the regiment were concentrated in the area of ​​the metro station Mikhailovka - der. Boremel.

During the 1916 campaign, the 2 Astrakhan Cossack Regiment performed the usual functions of the military cavalry of the 5 Army Corps, which were complicated by periodic participation in the trench warfare. The regiment participated in the Naroch operation and the summer offensive of 1916. 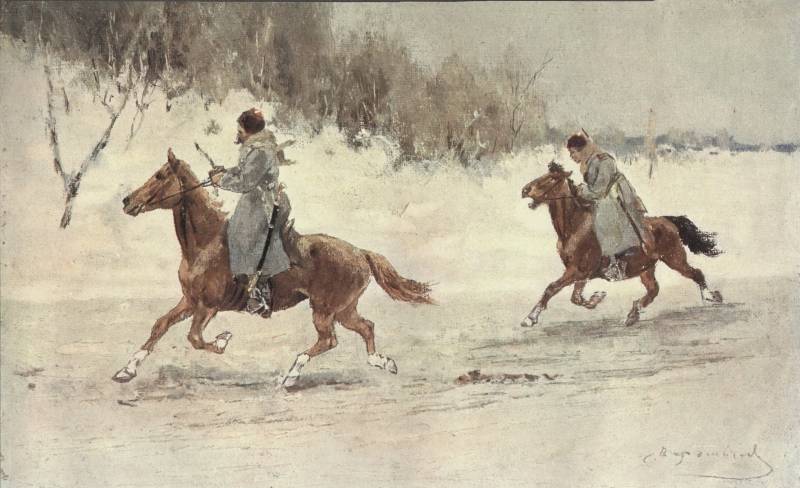 Cossacks on intelligence. The great war in the images and paintings. Issue 2. Ed. Makovsky D. Ya. M., 1914.