Has the war between the USA and Iran already begun?

29 2017 June
26
As people from the White House say, the operation against terrorists in Syria and in Iraq is coming to an end. The collapse of the “state” of bearded militants is not far off. But what next? And then what is visible today: the war between the United States and Iran. Washington is asleep and sees how to get into a fight with Iran and Syria for the sake of control over the territories from which the Islamists are supplanted. 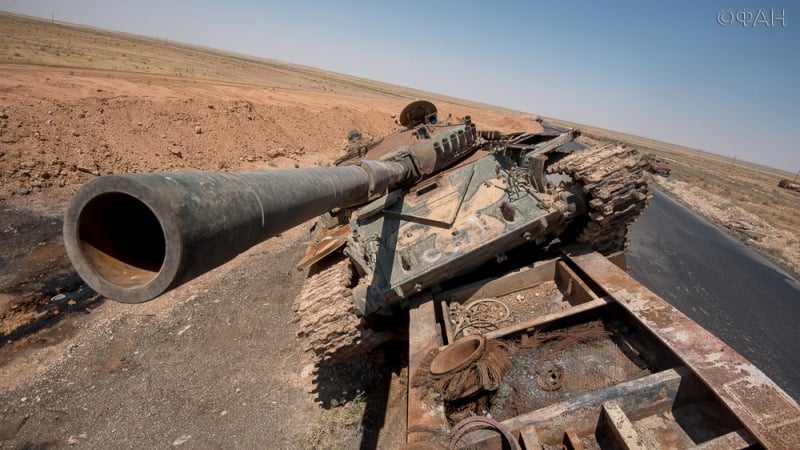 Other informed sources of American origin have no doubt: the war has already begun, since the Pentagon aimed to prevent the Syrian army and Iranian and pro-Iranian forces into the Euphrates valley. US outposts may appear in some parts of Iraq. In the language of White House officials, the idea of ​​such a “preventive” intervention in the evolving situation in Syria and Iraq means at the same time complete suppression by the Americans and their allies of the “Islamic state” (prohibited in the Russian Federation) and the “stabilization” of the position of “moderate opposition” in Syria. As for Assad, he will not be at the helm of power.

This is told by Karen de Young and Greg Jaffe in Washington Post.

The United States is in fact "in conflict" with Syria and Iran, the authors of the material write in The Washington Post. Officials of the Trump administration, awaiting the defeat of the "Islamic state" in its Syrian "capital" Raqqah, are already planning the "next stage of the war" - "the difficult struggle that will lead them to direct conflict with the Syrian government and Iranian forces."

To some extent, this collision has already begun, analysts believe. The unprecedented recent US strikes "against the regime and militias supported by Iranian forces" were a "warning" to President Assad and Tehran. Washington made it clear that he would not allow him to confront American forces and their local allies.

As the Assad forces and the militia began to move eastward, senior White House officials began to "push" the Pentagon to create outposts in the desert region. The purpose of such American outposts is to prevent the Syrian or Iranian military presence, which could prevent the US military from fighting the IG dominant forces here (meaning the Euphrates valley to the south of Raqqa, as well as sparsely populated areas of Iraq, where militants could regroup and continue to plan terrorist attacks against the West).

Officials said the publication that the statements of the Syrian government in the relevant area can also "undermine progress towards a political settlement", which should lead to a "stabilization" of the country. Control over the country of Assad should be limited, and ultimately - "push" the president from power.

The rationality and necessity of the brief strategy described above (including the United States in the civil war in Syria after several years of trying to stay away from it and not wanting to risk direct confrontation with Iran and Russia) became the subject of “intense debate” between the White House and the Pentagon, journalists said.

Not everyone in the Pentagon is satisfied with this strategy, some militaries are actively resisting it: is it possible to defend American troops that take isolated positions in Syria or move closer to Iranian forces in Iraq? European allies in the Middle East coalition also question the possibility of the success of such a strategy.

One of the White House officials, on condition of anonymity about such concerns, said: “If you are concerned that any incident could lead to Iran’s exploitation of US vulnerabilities ... If you don’t think America has real interests to fight for, then OK".

The official noted that expanding the role of the United States would not require more troops, since there would be enough air force.

Another official said that the question is not in the strategy itself and its goals, but in how best to implement the strategy.

It is also reported that the decision to bring down the Iranian unmanned aerial vehicles and the Syrian fighter was made by the Pentagon, and not the White House. The decision to strike was made "in response to approaching or attacking American troops and their allies in Syria." This was reported by the same anonymous official.

Experts believe that the previous administration is too "tormented" with the decisions regarding Syria. Ilan Goldenberg, a former high-ranking Pentagon official who now heads the New American Security Center for the Middle East, agrees with this statement. In his opinion, the B. H. Obama administration “suffered too much” about every decision in Syria. However, Mr. Goldenberg is also dissatisfied with the actions of Trump, who was not able to formulate any strategy at all. “This is the worst of all worlds,” said the expert. “I know that the president is interested in secret plans,” Goldenberg says ironically. “But this situation requires clarity regarding our goals and what we will do or will not tolerate.”

During his election campaign, Trump promised to announce a new strategy for defeating the Islamic State during his first month in office. However, his strategy still remains undisclosed. For several months, Trump simply ... follows the lead of President Barack Obama, avoiding clashes with Assad, Iran and Russia, and continuing to deliver targeted strikes at IG strongholds. True, in April, Trump hit the Assad forces with cruise missiles - this happened after the use of chemical weapons. Since then, “direct clashes” have begun to occur between the United States and the Assad regime. Trump's campaign to unite efforts with Russia against the “Islamic State” has largely come to naught due to the widening gap between Washington and Moscow. Not less than three times in May and June, American troops bombed Iranian troops - the militia approaching the At-Tanf garrison. Russia, meanwhile, said it would prepare its powerful air defense system in Syria - where American aircraft operate.

In the White House, senior officials in charge of developing a policy on Syria point out that Iran’s goal “seems to be aimed at building ties with Iran’s friendly forces on the other side of the border, controlling lines of communication, and trying to block us [the US coalition] - exactly Our commanders and strategists assess the situation ... "If it affects the political result, that is, it will allow Iran to further strengthen its position in Syria as the dominant force in the long term, then it will threaten America itself The official strategy of struggle against “IG”, the official added, as well as threaten the possibility of achieving political reconciliation. “For us,” said the official, “this is the biggest concern.”

Strangely enough, we note that the White House employee, who answered the Washington Post, was ashamed to voice the White House’s “strategy”. After all, the newspaper says in black and white that President Trump does not have a Syrian strategy. Probably, there is something in the strategy, and this is something that remained in the White House from the times of Obama and Hillary Clinton, who constantly kept saying: “Assad must go.” However, there is a difference.

Trump's strategy in Syria is not based on the opposition of IG. At least this item is not the main one. The main priority is the removal of Assad from power and the transfer of Syria into the hands of the “moderate opposition”. The second priority is the infringement of Iran’s interests in the region. At this point, Trump is strikingly different from Obama, who sought to overcome differences with Tehran through diplomacy and the UN.

The endless war in Syria Trump is only on hand: this businessman started an economic upsurge in the United States through orders to the military-industrial complex. Expect any pacification of the parties in Syria at Trump is not necessary. And in the very near future, aerial clashes between coalition forces and the Iranian militia are likely. Washington will show itself as the "master" in the Middle East. Fighters, bombers, rockets will replace Trump's diplomacy. No wonder he cuts the budget of the State Department!