27 2017 June
4
In Russia, any literate person, at least a little interested in politics, knows that in the NATO bloc there are some common standards that must be met for each member of the alliance, and the army admitted to the community must go to them. We have written about this mass of nonsense.


Even many servicemen believe that this implies the obligatory and immediate rearmament of the new member of the Alliance on NATO equipment. It is not clear, however, which - American, English, French, German, Italian ... After all, in large countries the weapons are mostly of their own production, that is, different. Now added Polish, Slovak, Bulgarian. For some reason, it is not customary to notice that the armies of Poland, the Czech Republic and Hungary are equipped mainly with Soviet equipment or their own, created during the Warsaw Pact, although these countries have been 18 years in NATO. And its replacement, which is proceeding very slowly, is not being conducted in connection with the transition to NATO standards, but because the Soviet has developed a resource, the Russian one will not be purchased for purely political reasons.

In fact, there is no question of any uniformity of technology in NATO. Standardization is carried out only so that the Armed Forces of some member states can use the weapons and logistics equipment of other NATO countries and conduct joint actions. These standards now number almost one and a half thousand. In particular, ship electrical system uniformity, operational plans, procedures for working with prisoners, equipment nomenclature and classification, artillery and rifle ammunition, medical operations under RCB contamination, levels of body armor, dictionaries of terms and definitions, artillery firing tables, radio equipment, knowledge of English and much more. This in itself is reasonable, although still, surprisingly, it is far from complete compliance. Simply put, the German hose connectors do not always fit the neck of the French fuel tanks. There are plenty of such examples, which the NATO members themselves complain about, but to force the violator of standards, if he is already a full member of the alliance, is essentially impossible to implement them. NATO discipline is very low.

At the same time, a significant part of NATO standards does not apply to technology, but to management principles, doctrinal and tactical issues. We also write about this, especially about the armies of the countries of the former USSR, striving for NATO membership or at least expanding cooperation with the alliance. The phrase “the brigade of the country N has been trained in NATO standards” is pronounced (and, it seems, even spelled) almost aspirated. As if this brigade gained new magical qualities that make it invincible. In this case, you always want to ask: what outstanding victories over powerful opponents did the alliance have, especially on land? The answer, of course, cannot be obtained, for there is nothing to say.

At the beginning of 2016, the Ukrainska Pravda published an interview with the Georgian General Georgiy Kalandadze, the former head of the Joint General Staff of the Georgian Armed Forces, who has been working in Ukraine since 2014. The most interesting thing is the story about the transition of the Georgian armed forces to these very NATO standards. Key moment:

“... They are very attentive to losses, because the state then bears material liability. Roughly speaking, you can get involved in a battle when there are three of us per enemy. And at the same time we have support aviation.

- That is, there is no such thing as “keeping strategic heights to the last soldier”?

- We will not go into details, because there are different situations. It is important to understand that the NATO general first of all thinks about losses, and then about tasks. This is a different type of management. ”

That's the whole truth. This is a different type of management, but also thinking. Any Western commander is not thinking about a combat mission, but about how not to suffer losses. If they are foreseen and will, he will refuse or stop fulfilling the order. Of course, someone can call it humanism, deserving admiration. In fact, it is a complete degradation. Of course, there is nothing good, if the combat task is solved at any cost, the enemy is "flooded with corpses." But when the army refuses to carry out an order to avoid losses, it is already a rabble. It will be much more honest to dissolve it than to feed the senseless, but costly parasite. 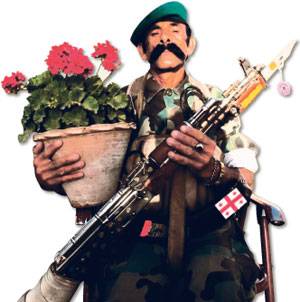 It is quite natural that in August 2008 of the year, the Georgian army, which successfully switched to NATO rules, when confronted with the Russian, which these standards are absolutely alien, not only lost, but instantly collapsed and fled, throwing weapons and equipment. Despite the fact that the Russian group did not have a numerical superiority over the Georgian Armed Forces (at least on the ground). Yes, this is partly due to psychological moments - the Russians are fighting better than Georgians. But the main role was played by the NATO management standards. When confronted with an equal at least adversary and even in the absence of air supremacy, these standards prescribe to avoid combat. Or, quite simply, escape. That the whole world and showed the Georgian army.

Another example was given by Afghanistan. This example becomes more obvious with the passage of time if you compare the Soviet and NATO Afghan wars. In 80, the Mujahideen received the broadest support (people, money, weapons) from the coalition of the United States, Britain, Saudi Arabia, Pakistan and China. After the 2001, the Taliban didn’t have anyone behind them, so they were and are an order of magnitude weaker than the Dushmans. Their weapons are now even worse than they were in 80, despite the fact that at that time Soviet troops never dreamed of reconnaissance and combat drones or high-precision ammunition, which the US and NATO currently possess in large quantities.

Our 40 army fought in Afghanistan in full, including on the ground. The anti-Taliban coalition of NATO avoided the land phase in every way. European contingents sat out on their bases, leaving them only for urgent needs. The Anglo-Saxons (Americans, British, Canadians, Australians) fought more actively, but not comparable with the Soviet army.

Taking into account the fact that no one from the outside supported the Taliban from the outside, and the technological gap between the warring parties was just a space war (the Soviet troops in the 80s had no such technological superiority over the enemy), it can be said that the Western coalition conquered its in this country is much worse than our limited contingent. The Taliban, unlike dushmans, having lost almost everything at the beginning of the war, today control a significant part of the territory. 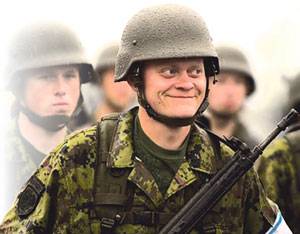 The difference between the Soviet and NATO lines of action is projected on the Afghan army. In 80-s, the level of its combat and moral-psychological preparation was an order of magnitude lower than the Soviet 40, which created enormous problems for our contingent. But, as it turned out, that Afghan army was just a model of military discipline and valor compared to the current AF forces. All for the same reason - modern askers are prepared according to NATO standards.

In an interview with Kalandadze, they talked about the experience of transition to NATO standards due to the fact that the current Kiev authorities really want to join the alliance. Meanwhile, the Ukrainian army, ruined by four previous presidents, for the last three years has been demonstrating the ability to at least somehow fight solely because it remains essentially deeply Soviet. The transition to NATO standards for it is equivalent to an immediate collapse. There will be no talk of any war in the Donbass. Therefore, we must wish Kiev to carry out this process as quickly as possible, so frankly and accurately described by the Georgian general.

Accordingly, there is no need to worry that one of our potential opponents is switching to NATO standards, on the contrary, one can only dream about it. It is necessary to be afraid that the western rules will be accepted by one of the CSTO allies (for example, Kazakhstan). Not because they will cease to be at one with Russia, for this is not determined by standards, but because then we simply cannot even conduct joint military operations together. Ours will think about how to win, and allies - how to save their lives. Therefore, I would like to wish the brotherly governments not to make fatal mistakes.