Without Russia, An-148 is waiting for complete disappearance

July 1 2017
29
All Monday, there were conflicting reports about the fate of the An-148 - Russian-Ukrainian aircraft assembled in Voronezh. Officially, statements about the termination of its production are refuted. Nevertheless, a number of circumstances allow us to make extremely disappointing forecasts for this car. The halt of cooperation will harm both Russia and Ukraine. 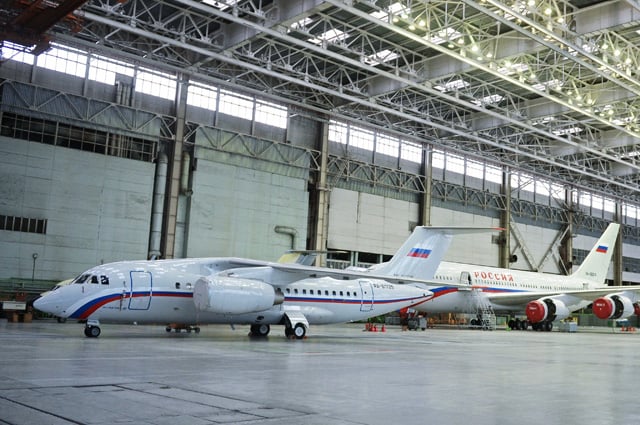 Russia will stop production of the An-148 short-haul aircraft, despite the import substitution achieved by the Voronezh Aircraft Building Association (VASO), reported RIA "News"Citing a source in aviation industry.

“Great interest was in An-148, which was made in Voronezh. Interest was shown by both civilian airlines and the Ministry of Defense. Unfortunately, the policy turned out to be stronger than the reason and the previously established relationship regime, ”the source said. According to him, the assembly of the last two aircraft ends at VASO, after which история An-148 as the type will end.
An-148 - short-haul narrow-body passenger aircraft developed by the Kiev OKB im. Antonov, created at the beginning of 2000-x in cooperation with Russia as a replacement for the outdated Tu-134. Aircraft of this type exploit airlines "Russia" and "Angara", a special flight squad "Russia", as well as the Ministry of Emergency Situations and the Ministry of Defense. An-148 - presidential board of the president of Ukraine Petro Poroshenko.

However, at the Voronezh plant to bury the plane in no hurry. The future of An-148 will depend on the demand for this car, the representative of YOU told Izvestia. At the moment, the plant fulfills the existing contract with the Ministry of Defense of the Russian Federation: this year it remains to hand over three An-148, in 2018-m - two more. “There was no change in the content of the contract,” the plant representative assured. Rostec also denied stopping the production of the aircraft in Voronezh, NSN reported.

Nevertheless, the funeral of An-148 is only a matter of time, says Oleg Panteleev, the editor-in-chief of Aviaport. You just need to fulfill the contract and finish unfinished planes, which have already invested huge amounts of money. But then the project is at an impasse. If not 2017, then 2018 year, most likely, will be the real end of the history of An-148 in Russia.

“The customer of the Voronezh An-148 is only the Ministry of Defense of the Russian Federation, and only other Russian power structures, in particular Rosgvardia, have shown interest. The political factor will not allow Ukrainian companies to supply components for the production of these aircraft in Voronezh for such customers. If, conditionally, it was about deliveries to Cuba, then there would be no problems. But export contracts for Voronezh-made airplanes are not expected, ”says Oleg Panteleev. Yes, and the Russian military would not want to depend on the Ukrainian parts.

In addition, Russia is interested in promoting the export of SSJ-100, and not its direct competitor - An-148. The Russian Defense Ministry, by the way, was considering the option of replacing in its fleet of “carcasses” with SSJ-100, but so far it has refused this idea. Because SSJ-100 can not work on unprepared unpaved runways, with which An-148 can easily cope.
An alternative for the Ministry of Defense will now become, most likely, a IL-114 turboprop. It has a slightly smaller capacity - 64 seats against 75 in An-148, but this is not so bad. “In terms of flight range, the Ilyushin machine is acceptable for a military customer, but in terms of speed, of course, it is far behind. But for now it is necessary to fly the IL-114, ”says Panteleev.

“For the first time, the IL-114 should be suitable for the military, and if it is modernized, it may well become a new standard for the Ministry of Defense,” said First Vice-President of the Russian Union of Engineers Ivan Andrievsky

However, for the time being it is impossible to discount the option of resuming the production of An-148 not from Ukrainian parts. Only it is necessary to calculate and understand how such an option is profitable, says Andrievsky. At least for the Voronezh aircraft factory it would be a good way out. Vaso does not want to lose an important serial project. Now at the enterprise there are two production programs: piece assembly IL-96 and assembly slightly more serial An-148. According to IL-96 from above, the task is given to promote this machine, therefore the assembly of this aircraft will be continued. But with An-148 one way or another will have to part. According to KLA data for 2015 a year, the production of An-148 brought 4,4 billion rubles from the total revenue of VASO to 10,3 billion rubles, that is, almost half.

In the future, the place of An-148 at the Voronezh aircraft factory may take the production of a light transport aircraft IL-112В. “Probably, next year the plane will safely make the first flight and in the future the mass production will be deployed in Voronezh. This will allow one project to be replaced by another, ”says the head of the Airport.

The only problem is that the IL-112 mass production program will actually begin only after 2020, and before this time the plant will be doomed to losses. But the production volumes at VASO will increase. If for five years 15 An-148 was produced, then with IL-112 the production speed will be much higher - up to 12 machines per year, Andrievsky notes.
The fate of An-148 in Ukraine is also not unclouded. In Russia, this aircraft, albeit in small quantities, but produced. In Ukraine, there is no assembly at all. Although the Ukrainian “Antonov” earlier made a loud statement that it would replace the Russian components (of the order of 50%) on this plane and begin assembling it. But in fact, it is not known what will happen at Antonov.

“Ukrainian JSCB Antonov is capable of making the so-called import substitution, more precisely, the substitution of imports from Russia for imports from European countries. But will such a decision be economically viable? It will take a lot of development work, subsequent tests, "- says Panteleev. After all, in fact, replacing 50% of Russian components with Western ones will mean the creation of a new aircraft.

On the example of the transport An-132D, which made its first flight at the end of March, Ukraine has shown that, in principle, it can assemble an aircraft without Russia. The An-132 is a deep modernization of the Soviet An-32 with the installation of American avionics, Pratt & Whitney Canada PW150A turboprop engines, as well as other Western-made auxiliary equipment.

But the project An-XNUMHD was lucky, because he was interested in Saudi Arabia. The Saudis ordered 132 such machines assembled in their homeland (and not in Ukraine). But will anyone, except Russia, want to give money to Ukraine to resume the production of the An-80 aircraft? The probability of this is extremely low.