29 2017 June
35
22-23 June in Brussels, the next EU summit. Representatives of European countries discussed the most important issues for them. On the agenda, of course, were present and Brexit, and the extension of sanctions against the Russian Federation, and the migration situation in Europe. The problems of migration in the European Union over the past few years have not been resolved. Moreover, European states are not even able to work out a general policy on migration. Brussels puts pressure on the countries of Eastern Europe, demanding from them the placement of an increasing number of migrants, the Eastern European states are stubbornly resisting this. 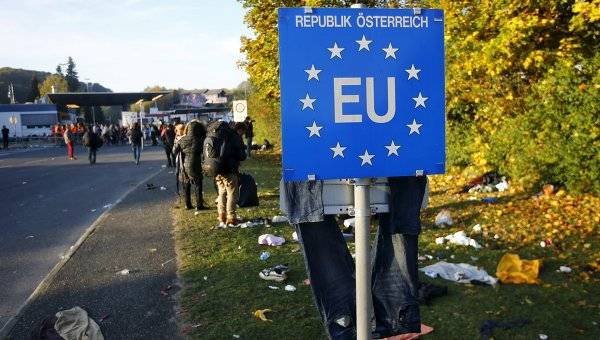 The very idea of ​​accommodating countless migrants arriving in Europe from Asian and African countries belonged to the leadership of the European Union, which has long adhered to complete indifference towards the needs and aspirations of citizens of European countries. It is known that most migrants tend to Germany or the Scandinavian countries. But the authorities of the rich Western European countries require that the “junior partners” - the countries of Eastern Europe - also place the migrants. The most “tasty” from this point of view object is a large Poland. Brussels leaves no hope for the Czech Republic and Hungary as the most prosperous, along with Poland, Eastern European states. Why Poland, Czech Republic and Hungary? Yes, because Romania, Macedonia or, for example, Latvia themselves do not represent any interest for migrants, it is almost impossible to make migrants stay in these poor states.

The main burden of receiving refugees arriving from Turkey and from the coast of North Africa, while falls on Italy and Greece. These countries are forced to "process" multimillion-dollar flows of migrants. Africans and Asians are kept in special camps, “fished” by coast guard boats from wrecked ships and small boats. But migration flows do not stop. The words of the Libyan leader Muammar Gaddafi that Europe is waiting for a real invasion from Africa can already be considered a fulfilled prophecy. But both Italy and Greece cannot endlessly “keep the front lines” by accommodating illegal migrants. The Italian authorities have long been trying to revise the famous Dublin Agreement, according to which the first EU country to which the migrant arrived, should assume the main responsibilities for its reception and accommodation. Most of the migrants get to Europe through Italy and Greece. Already, Italy literally groans from migrants, and migration flows do not stop.

For example, on the night of 26 June 2017, an impressive group of 400 people - people from South Sudan - tried to break through from Italy across the border into neighboring France. The French authorities were forced to send a gendarme division with a helicopter to the border. Together with the Italian Carabinieri, the French gendarmes managed to disperse the South Sudanese migrants with tear gas. This is quite a common occurrence for the Italian-French border. In Liguria, not far from the famous Cote d'Azur, the favorite vacation spot of the rich from all over the world, several large tent camps of migrants from African countries are concentrated - South Sudan, Eritrea, Somalia, Libya. Periodically, migrants make attempts to break through to France, some still manage to do this. 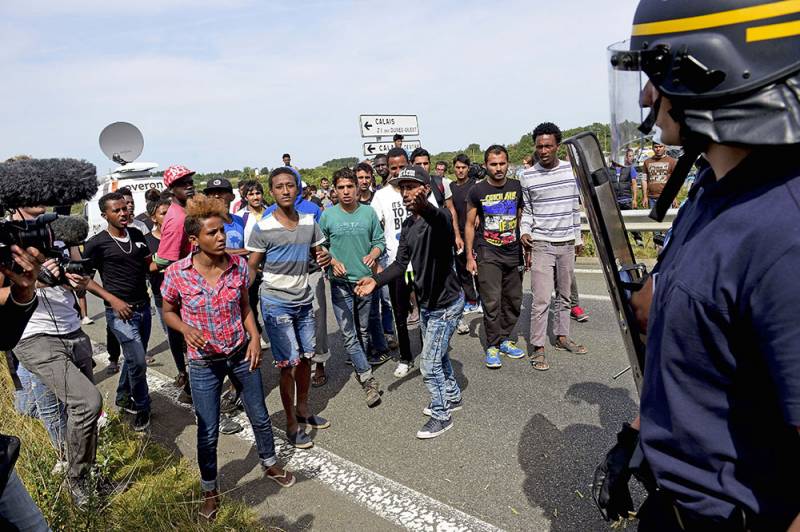 By the way, there are more and more migrants arriving in Italy. A comparison of similar figures for 2016 and 2017 of the year shows that in 2017, more immigrants from African countries arrived in the Apennines at 20% than in the first half of 2016. And if in the 2016 year they talked about the “peak of migration” and record figures compared to 2015, then now it’s time to talk about “super pick-up” and super-records. Unhappy Italy has not yet seen such an influx of migrants. Migrants themselves in Italy are not in a hurry to stay, and rush on - to France and Germany. They have heard about generous social benefits and permissiveness. It seems that migration to Europe is becoming the most common life strategy for young and not very Africans, and to a lesser extent for residents of the Near and Middle East.

Rome and Athens are trying to appeal to Brussels, and the leadership of the European Union - to the first persons of Poland, Hungary, the Czech Republic, and other Eastern European states. Eastern Europe is accused of lack of European solidarity and inattention to the problems of Western Europe, which takes the brunt of migration flows. The European Commission has even launched a corresponding investigation in relation to Eastern European states that refuse to accommodate migrants. It turned out that over the past two years, which have become the most strained for the influx of migrants, Poland and Hungary have not placed a single migrant on their territory. The Czech Republic has placed only twelve people, and Slovakia - sixteen people. Of course, these are very small numbers compared to the norms that the European Union tried to impose on the Eastern European states. In Brussels, they expected that Poland would receive at least seven thousand migrants, and the Czech Republic and Hungary - for 1,6 and 1,3 - for a thousand migrants, respectively. Quotas for accommodation of migrants were set even for the poor by the European standards of the Baltic countries, however, they are in no hurry to follow the Brussels instructions.

French President Emmanuel Macron, on the eve of the forum, said that the problem of migration is common to Europe. But in Eastern Europe they do not think so. Poland or the Czech Republic did not colonize African territories, did not wage wars of conquest in the Middle East or North Africa, did not trade in black slaves, and did not pump natural resources from Africa and Asia. Therefore, they, of course, do not understand why the migration problem of France or Italy is suddenly their own problem. Moreover, the economic situation of the countries of Eastern Europe is much worse than their western neighbors. However, the leadership of the European Union does not take all these arguments into account. Before the summit, Brussels turned to frank blackmail, promising sanctions and impressive fines for Eastern European countries refusing to accommodate migrants. Also, the European Union threatens to deprive Poland, the Czech Republic and Hungary of the right to vote at meetings of the Council of the European Union.

However, there is another aspect - the migrants themselves do not want to settle in Poland or the Czech Republic, in Hungary or, especially, in the Baltic countries. Even if Eastern European states give the go-ahead to accommodate migrants in their territories and try to comply with all EU regulations, the migrants themselves will look for any opportunity to move from Poland to Scandinavia or from Hungary to Germany. This can be explained - social support in the countries of Eastern Europe is much less developed than in Western Europe. As for jobs (although most African-Asian migrants are not eager to work), in Eastern Europe there is unemployment even for its citizens. Polish, Romanian, Latvian and Lithuanian citizens have long been “driving around” in Western Europe in search of work, they themselves are migrant workers. In the Baltic countries, it is impossible to find work for African-Asian migrants at all, but there are no means to pay them social benefits along the lines of Western European countries. 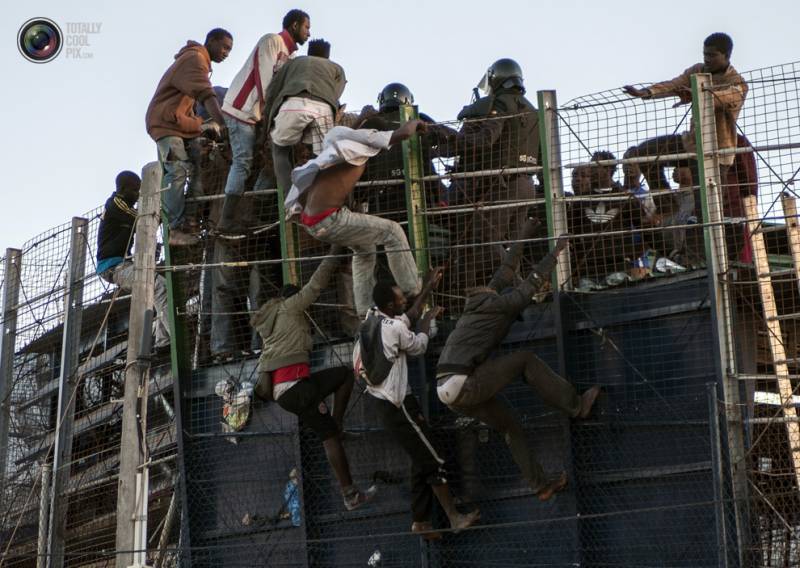 The Hungarian Prime Minister Viktor Orban, who demands German Chancellor Angela Merkel not to interfere with Hungary in the election campaign in Germany and does not try to solve intra-German problems at the expense of the Hungarian state, is very harshly criticizing the policy of the European Union. It is noteworthy that from many Germans the policy of Orban meets with approval and respect - the Hungarian Prime Minister gained fame for himself as defender of the genuine national interests of the Hungarian people, unlike the German Chancellor Angela Merkel, who had long become one of the most ardent lobbyists of African-Asian migration not only in Germany, but throughout the European Union.

The Minister of Foreign Affairs and Foreign Trade of Hungary, Peter Siyarto, emphasizes that the very idea of ​​accommodating migrants in European countries is very risky. After all, no one knows what kind of people come to Europe, what can we expect from them. In the context of the growing number of terrorist attacks in European countries, such inattention to migrants from Asia and Africa becomes simply dangerous.
The Polish leadership is convinced that not allowing migrants into the country is the best prevention of terrorism and extremism. Representatives of Warsaw even declare that they are learning from the mistakes of other European countries, obviously meaning France, Germany, Great Britain, Belgium, where in the last two years a large number of terrorist acts have occurred with numerous human victims. The spokesman for the Polish government, Rafal Bochenek, even said that every decision on the placement of migrants in European countries stimulated thousands of other migrants to arrive in Europe.

Poland’s position on migration flows is very categorical. In Warsaw, they believe that not only Poland but also the entire European Union should be protected from migrants. To do this, it is necessary to review all the fundamentals of the migration policy of a united Europe and to attend to the issues of protection against illegal migration. Polish Interior Minister Mariusz Blaszczak believes that the multiculturalist policies professed by the European Union are bringing “bad results.”

Another justification for its position on migrants from the Warsaw side is that Poland has received a large number of migrants from neighboring Ukraine over the past three years, from 2014 to 2017. According to official data, there are about XNUMX million Ukrainian citizens in Poland. That is, Poland is also involved in solving the migration problem of the European Union, only being its "shield" not from the south - from African migrants, but from the east - from migrants from Ukraine. But the leadership of the European Union does not care about this circumstance. Most likely, the reason is the greater "convenience" of Ukrainian migrants compared to immigrants from states like Eritrea, South Sudan, Somalia, Libya, Afghanistan or Syria. However, not all political and public figures are satisfied with Ukrainian migrants in Poland, especially considering the specifics historical relations between Poles and Ukrainian nationalists, including during the Second World War.

Until recently, the countries of Eastern Europe in the European Union are trying to remain the last bastions of European values ​​- Christian civilization, reasonable conservatism, preservation of national identity. It seems that if Europe is ever waiting for a new wave of spiritual and ideological revival, it may come from Eastern European states. Despite their economic dependence on Western Europe, to the last they are trying to resist the imposition of those values, which for some reason nowadays have been called “European” (although they are actually the values ​​of cosmopolitan liberal and left-liberal circles that are not related to genuine European culture) . However, given the serious economic gulf between the West and the East of Europe, forecasts can be very unfavorable for Eastern European countries. If in France and Germany, the main “heavyweights” of European politics, in the foreseeable future, nationally oriented forces will not win, then Eastern Europe will also have hard times.

The last EU summit only confirmed the most important trend of recent years - the deepening of internal contradictions in this supranational organization and the further development of the confrontation between Western Europe and Eastern Europe on the migration issue. In the very near future, Eastern European leaders will have to decide what is more important for them and their states - their own development, the preservation of national and cultural identity, or the fulfillment of “common European obligations”, which are in fact blackmailing Brussels and the “heavyweights” of European politics.

Ctrl Enter
Noticed oshЫbku Highlight text and press. Ctrl + Enter
We are
Migrants go north. The specifics of the migration situation in Scandinavia"Trouble" of the Promised Land. African immigration to Israel
Military Reviewin Yandex News
Military Reviewin Google News
35 comments
Information
Dear reader, to leave comments on the publication, you must to register.