Macron loses his political face, without really finding him

29 2017 June
44
On Monday, at a joint press conference with Ukrainian leader Petro Poroshenko, French President Emmanuel Macron called Russia an aggressor. “The aggression comes from Russia, that is, the aggressor is not Ukraine,” Interfax quotes Macron. “We also recognize that the annexation of Crimea is illegal, which means that we all know who started the war and who created this situation, and in what situation we are.” 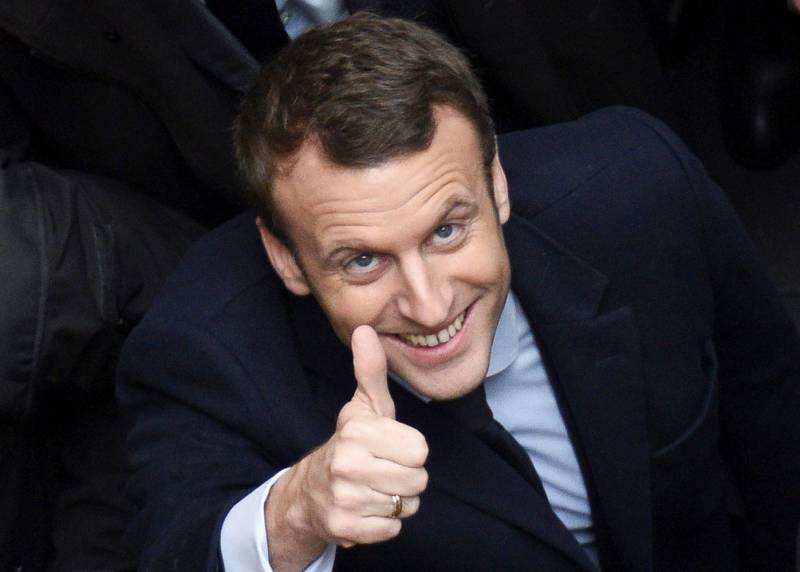 In the rhetoric of the leaders of the Norman four is a new word. Previously, independent experts were dominated by the opinion that the heads of the guarantor countries of the implementation of the Minsk agreements on Ukraine possess genuine information from their special services and, despite the dissimilar public stance, know and understand the real state of things. President Macron has been accessing the intelligence community of France for six weeks. There was time to study the situation.

It is all the more surprising that the head of one of the leading countries of the world, who has a special status in the UN Security Council and in the international system of military relations, spoke in the voice of the Ukrainian president, who is not trusted by world leaders. However, it's not just that.

Assessment of the conflict in the Donbas has always been a weak point of the “Norman format”. The leaders of Germany and France avoided direct assessments, such as, for example, recognition of the military coup in Ukraine, which would put them in a rather ambiguous position. Because it was the German and French foreign ministers who, with their intervention in the events in Ukraine, initiated the dramatic conflict in the east of this country.

Among other things, in Berlin and Paris, they could not call a civil war in the Donbas. Such recognition in accordance with international law would limit the political and financial support of the new Kiev authorities. The West was not at all ready for such a turn of events.

On the other hand, for all their Russophobia, Angela Merkel and Francois Hollande did not try to impose responsibility on Russia for the war in the Donbas. Since this would completely destroy the fragile construction of the Minsk agreements. After all, it was Russian President Vladimir Putin who not only initiated the adoption of this document, but became the guarantor of its execution. Moreover, at the initiative of the Russian Federation, the UN Security Council by its resolution gave the Minsk agreements the status of an international legally binding document.

Meanwhile, the vagueness of the assessments of the conflict in the east of Ukraine gave the president Petro Poroshenko the opportunity to interpret the Minsk agreements freely. Kyiv opened a perspective for a broad political maneuver, up to the demonstrative non-execution of the agreements reached. The world has seen it. Little by little, dissatisfaction with the behavior of the Ukrainian authorities began to accumulate.

Sometimes it broke through in unexpected ways. In early June, for example, at the party congress of the Christian Democratic Union, German Chancellor Angela Merkel first called the conflict in Donbas a civil war. "In eastern Ukraine, there is a civil war with the support of Russia," the Frankfurter Allgemeine newspaper quoted Merkel as saying at the CDU congress. A new assessment of the conflict spread almost all the leading media in Germany.

In Kiev, despite the fact that the German Chancellor did not do without her usual criticism of Russia, the new assessment of the events in Eastern Ukraine caused a shock. Recognition of the conflict in the Donbas civil war threatened to stop lending to Ukraine by the International Monetary Fund and European financial institutions. Plus, the authorities in Kiev became open to accusations of crimes against their people.

How Macron in Paris was sucking Poroshenko

Thus, the recognized defender of Petro Poroshenko Merkel, willingly or not willingly, created quite serious problems for the Ukrainian president. As is customary lately, help came to Kiev from overseas. In mid-June, at a hearing in the Foreign Affairs Committee of the House of Representatives, US Secretary of State Rex Tillerson stated that the United States was not satisfied with the progress and implementation of the Minsk agreements and was deeply concerned about the escalation and violence in Donbass.

Tillerson expressed readiness to support a different format for resolving the Ukrainian crisis, except for the “Minsk” one, if such is developed. This is how TASS reported it: “It’s very possible,” the Secretary of State shared with the congressmen her vision of getting out of the conflict in Donbas, “that the Ukrainian government and the Russian government can come to a satisfactory settlement through some kind of structure that differs from Minsk, but goals set in the "Minsk".

Behind this rhetoric of Tillerson, the desire of Americans to represent the war in the Donbas in the form of the Ukrainian-Russian conflict is clearly visible. Along the way, blaming Russia for the breakdown of the Minsk agreements. During the photographing of the American and Ukrainian presidents advertised in Kiev, this topic was not developed. Donald Trump limited himself to the words of support of Ukraine, and only.

The main party was to be performed by the new French president. Petro Poroshenko went to him soon after his trip to Washington. All that sounded in Paris was not only a pathetic copy of the Minsk agreements (three points from this document Emmanuel Macron presented as his proposals for resolving the conflict), but, in fact, distorted the meaning of the events in the Donbas. According to the unfair version of Macron, now the civil war in the east of Ukraine seems like a conflict between Moscow and Kiev. Russia in it assigned the ungrateful role of the aggressor.

In fact, this verbal balancing act brings only excessive nervousness and uncertainty in understanding the essence of the conflict and does not bring the parties one step closer to peace. The path to it is the same - through direct and responsible negotiations of the authorities in Kiev with the leaders of the unrecognized republics. This conclusion has long been reached by the expert community. It also acknowledged that President Poroshenko was not ready for direct talks with the Donbas.

The Paris revision of “Minsk”, perhaps, serves only one thing - the satisfaction of the political ambitions of Emmanuel Macron. But there was a slip. To understand it, you need to remember the events of the last time. Immediately after the inauguration, Macron dashed beyond the borders of France, demonstrating to everyone the determination, daring, and vision of new plans and prospects.
In Berlin, at Merkel, he drew the future of Europe, to which the entire Old World should strive, and proposed his own strategy of “regulated openness” for foreign trade. The liberal economist, and now the whole president of France, considered it expedient to introduce a certain level of protectionism in relation to external partners of the European Union. And in the union itself - to rein in active Eastern Europeans.

The Bundeskanzlerin with the French guest quietly agreed, but prudently pulled away from his avant-garde projects, having besieged the guest with a short phrase - “let's live, see!” do not give it up in assertiveness. The French then wrote a lot and with pleasure about it, as something extraordinarily important, almost epochal.

Later, Emmanuel Macron met with Russian President Vladimir Putin. At this meeting, the French president also climbed out of his skin, to show that he is a ready-made world-class politician and you can conduct responsible negotiations with him. True, at the final press conference Macron broke down, attacked journalists and, in part, to a Moscow guest.

Be that as it may, Emmanuel Macron made a bid for his role in world and European politics and, in general, did not fail. What can not be said about his meeting with Petro Poroshenko, at which the Frenchman spoke from someone else’s voice, reflecting the point of view not of the Norman leaders, but of the Ukrainian president, who even in Kiev is considered by many to be entirely dependent on American curators.

Having gone on about the president Poroshenko, Emmanuel Macron made a gross political mistake. It does not explain the growing pains of a young ambitious politician. This is evident - the obvious lack of independence of the new French president, his obvious dependence on the leading Western players. To prove the opposite, Macron now has to start all over again. And not the fact that he will succeed ...