The cities of Donbass: whether the rear of the front, or the economic front ...

30 2017 June
11
Sometimes, it seems worth visiting in the same city of Donbass, so, consider, visited all. True, this is because, when you leave one locality, you drive into another after a few minutes. Therefore, I personally strongly doubt that someday we will find out the true number of those killed in this war. The villages that were peacefully sheltered near the slopes and byways could not even afford a paramedic before the war, let alone the dead during the war and even more so.


Sverdlovsk, for example, was not as lucky in this matter as an example (if the notion of “lucky” is generally appropriate here) than in Donetsk and Lugansk. Only peripheral areas - satellite villages were slightly affected. The Armed Forces of Ukraine was very keen on the “control” of borders, which still makes itself felt by the blackened ruins of the Dolzhansky checkpoint.

Sverdlovsk is a young city, founded before World War II, in 1938 year. It is this year that decorates the stele at the entrance to the city in the frame of architectural forms in the form of three heaps. However, the settlement of the territory of the future city began in the 18 century, not counting, of course, the walking gangs of Scythians, Sarmatians, Polovtsy and God knows who else. But it was in the 18 century that the ataman Orlov founded the settlement of Dolzhikovo-Orlovskoe (it was Sharapkino), and the land itself belonged to the Great Don Army. This is the question of the historical right to inherit land. Although, if in Kiev and Diogenov Mova balakal, then the arguments here are superfluous.

The city was actually formed by combining several localities. Actively developed coal mines contributed to the influx of the population and ultimately determined its future for the next century. The city and now, as if by very peculiar pendants, is surrounded by heaps of coal mines.

After the outbreak of the war of Ukraine against Donbass, Sverdlovsk became part of the Lugansk People’s Republic without any protests. And it is worth noting that I have heard more than once or twice how the locals did their best to support the optimism of the return of the Crimea, various rumors that “someone said”, that they had already begun to distribute Russian citizenship, and “someone "I saw Russian helicopters ... But I wanted to believe in it so much. These rumors are good or harmful - a matter of dispute, but there was no desire to debunk them, because it helped people and gave strength. The truth is not unambiguous, especially if you look into hopeful eyes.

When the front stabilized relatively to the 2016 year, the people of Sverdlovsk were probably waiting for the most amusing “punishment” from Kiev. In order not to cool down the fervor of degradants from the Maidan, and at the same time once again remind the young Europeans who prevent them from giving up on the Champs Elysées, the Verkhovna Rada unleashed a trick with the renaming of cities within the framework of the package of decommunization laws. The most famous example is the renaming of Dnepropetrovsk to Dnipro, after which the residents of Kherson pretty much strained. But this fate, in the opinion of the Kiev people's deputies, was not only waiting for Dnipropetrovsk. 12 May 2016, Sverdlovsk in Ukraine began to be called Dovzhansk. The Sverdlovsk people, who have tenderly called their city affectionately Sverdlovka, laughed heartily.

But the "svidomye" chip appreciated - this is how much the budget can be mastered by repainting the globe of Ukraine! Neighboring Chervonopartyzansk became Voznesenivka, Proletarsky was renamed Kartushin, Komsomolskiy in Dubov. But "decommunization" turned out to be more attractive than cocaine. Renamed even the smallest villages. The village of Rosa Luxemburg with a population of less than 1, thousands of people were solemnly named Oleksandrivske, Red October (well, how to leave one) turned into Maiorov, Voykovsky became Kopani, and Kotovsky became Kalinove.

Kalininsky was not lucky most, on this village in 2 thousands of souls of the population of the ancient ukrov fantasy was over. Therefore, they squeezed the name of a neighboring village with a population of about 300 people - Kondryuche, replacing one letter. And Kalininsky became known as Kundryuche. Naturally, neither the new Kundryu residents, nor the “pre-residents” either de facto or de jure recognized the new Kiev trend. As the residents of Kommunarovka, Sadovy Novopetrovsky, did not recognize Sarabash’s house, and the inhabitants of Kominternovo really didn’t want a new name, since they were supposed to be residents of Pikusei (no joke). 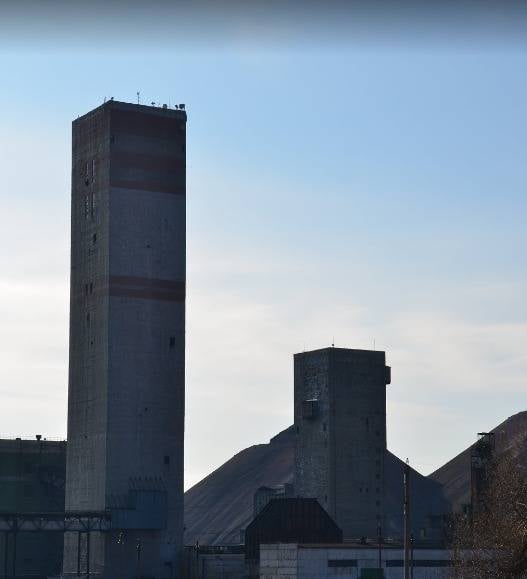 But the blockade affected the cities of Donbass, including Sverdlovsk, significantly. Showing the inability to resolve issues of organization and sales, DTEK began to lose mines. Thus, the coal enterprises of Donbass came under the control of the new CJSC Vneshtorgservis, which, according to official data, is not a state enterprise, but, again, according to the managers, will work in conjunction with the Ministry of Coal Industry of the LC. Directly for the miners, this resulted in the only fact that salaries were delayed, and later, the full transition from the natural wage system to the system of payment of material assistance. This material assistance by the miners themselves was ironically called “lifting”. And, as the new owners convince and hope the remaining frames, this is a temporary measure.

The whole tragedy of the situation lies in the fact that almost any city of Donbass is coal and mines. Everything else — urban infrastructure, carriers, medical facilities, and almost all industrial enterprises — is tied to the coal industry. Some of these companies are part of the structural divisions of the company. Such a non-core asset for the joint venture (structural unit) Sverdlovanthracite CJSC VTS is the DOL (children's recreation camp) Royal Cliffs, as well as the dispensaries for the personnel of Slavutych and Promin, its own bus fleet, etc. .

Due to the reorganization of the coal industry, all these enterprises were in a difficult situation. But they are still lucky, if again this concept is appropriate here. It was much worse for industrial enterprises, whose only clients for centuries were coal mines. Thus, a critical situation arose at the Sverdlovsk Machine-Building Plant (SMZ), which specialized in the production and repair of mining equipment. The plant invested the last money in the repair of the next batch of equipment, but due to the reorganization of the coal enterprises, its management failed to implement it. Therefore, ready-to-use equipment is gathering dust in the warehouse. By May 2017, the plant was actually shut down.

Of course, there is no work, no money. And here the plant suffered the greatest losses - personnel. Unable to financially retain staff, without even being able to promise at least an approximate start date for the plant, management was forced to disband employees. That is, the plant may have irretrievably lost many highly skilled specialists.

But the old-timers are still nostalgic for the times of the USSR, when the SMZ (like other enterprises of Donbass) supplied with its products not only the local mining complex, but also other regions of the Ukrainian SSR, as well as some of the Union republics. This painful memory worsened when the sluggish quarter-century collapse got Maydanovsky dope and missed a couple of years.

The best situation with wages, taxes and living standards in the Donbas will demonstrate the following. The management of the LPS requested the authorities of the LC to provide financial assistance to the plant with personnel for a hundred specialists in the amount of ... 500 thousand rubles (500 thousand, Karl!). This money, in their opinion, will help the company to stay afloat, pay taxes and other expenses, as well as financially support the remaining workers.

In fact, the entire industrial chain of Donbass depends on the mines on the principle of dominoes. It is necessary to bring discord into this mechanism even for a month, as all the other knuckles begin to crumble one after another. And the question is not only in the sales market, which is also very specific: not every enterprise is adapted to the use of high-quality Donbass-anthracite coal, moreover, the uncertain status of the republics does not contribute to international trade. There is an acute question of a real reorganization of industrial interaction, and to restructure a debugged system is comparable to an attempt to stop a diesel-powered shunting locomotive at full speed. Again, figuratively speaking, more than a dozen people will smear the cross ties while this system is put on new rails.