How did the “new top secret special forces unit” appear in Russia? TURAN

28 2017 June
36
More and more of the most incredible stories are born in the minds of active users of Internet resources. This applies to almost all areas of life. Naturally, such stories also concern army formations, “terribly secret” units, staffed by fighters with incredible capabilities. This is understandable from a business point of view. More excitement, more subscribers, more money in your own wallet. We are used to such "news". 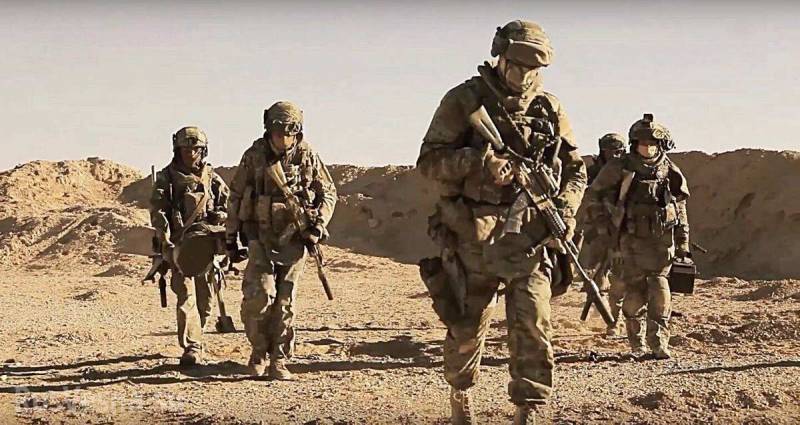 However, sometimes the news needs to be “adjusted”. And this, alas, happens all the time. One publication by a blogger who receives many reposts, and then publications in some media — that's all. Readers perceive the news as a fact. It is often impossible to convince the opposite. Well, so many "respected people on the Internet" cannot tell fairy tales. Yes, and Western media reported ... Oh, this admiration for the "honest media" in Europe and America!

Almost from mid-April this year, various sources periodically receive reports about the participation in hostilities in the territory of Syria of a new "Russian" special unit under the strange name TURAN. Or, as it is also called, "special forces from the USSR".

Media reports on the number of this squad in 800-1200 people. On ethnicity. Natives of the republics of Central Asia, the Caucasus, Azerbaijan. On the religion of fighters. Naturally, Muslims. Even equipment and uniforms are sometimes described. From the old "Afghan" to the modern uniforms of almost all the armies of the world. Armament - from Soviet-made automatic rifles to modern Western designs ...

Naturally, such a detachment should be "one of the most secret special services." Initially, the conversation went about Chechnya. Especially since the battalions of the military police from Chechnya actually arrived in Syria and show themselves very well there. We tried "to the tooth" and Ingushetia. Did not work out. The ethnic composition "pumped up" ...

Then the next wave of information swept. This is a super-duper secret detachment of the SSO of Russia. It is also clear why. MTR also proved to be quite a serious, competent and well-trained structure. To "cling" to such fighters for honor. Only “in the face’s face” can be stunned from these same fighters in person.

Today, after all, they have found an innocuous, serious company that is not very bright, but is well-respected in certain circles. This is SVR special forces! The belonging to this structure perfectly explains the “independence” of TURAN’s actions. This is not MO. Therefore, they are not subject to the office of Sergei Shoigu. I wonder how long this version will last?

What you read further is nothing more than my own view on TURAN. And this view is based on the analysis of open sources. No top secret archives and conversations with people who know the situation from the inside.

So where did the idea of ​​creating a detachment on religious principle come from? This is not the know-how of the TURAN command. This is a direct copy of the Muslim battalion of the Afghan war. It was then that the first time the USSR used its capabilities. We are a multinational country. Many languages ​​of the Central Asian peoples practically coincide with the languages ​​of the peoples in Afghanistan. And belonging to one religion helps to quickly find a common language. Do not violate the moral, ethical and religious canons, and this is really a significant factor for Asian countries.

And here is the first discrepancy of the new "special forces unit of Russia". TURAN does not hide, as I wrote above, its ethnic composition. These are citizens not so much Russia, as other countries. No matter how we treat Azerbaijan, Uzbekistan, Tajikistan, Turkmenistan, Kyrgyzstan, Kazakhstan and other former Soviet republics, no one will deny that these are independent countries. Not Russia. Or did Russia have its own foreign legion?

There is one more discrepancy, about which little is written in the Russian and Western press, but they talk a lot in the Arab media. Place of formation TURAN'a. Not Russia or any of the former Soviet republics. No, this is ... Syria! TURAN formed in the east of the Wadi Barrada Valley near Palmyra! (Saudi Edition Al-Watan Saudi Arabia). Russia does not form its own military units abroad.

Now about weapons and equipment. Indeed, when working with some special units of the SSO, various forms of clothing and weapons are used. The specifics of the work of such units is somewhat different than the work of TURAN. And the number too. I once wrote about this in one of the articles. And what do we see in this squad? We see well-trained fighters of the usual intelligence unit. And they work precisely as specialists in countering the enemy sabotage and reconnaissance groups.

Another interesting fact. Clear dosing of information in the press and on the Internet. These are not occasional "flashes" of fighters, but quite well-designed commercials about supermen from TURAN. And who among us most often uses advertising as an engine? .. Let me remind you that last year WWner's PMC was often mentioned on the net and various mass media ... Just food for thought.

Sometimes they ask about the actual name TURAN. I suggest you conduct an experiment. Ask your friend from any Asian republic about Turan. Surprised, but almost every Turkic people have stories about the once great state of Turan. It was located on the territory from Altai to the Mediterranean Sea. Historians, however, do not confirm this fact, but the idea itself is very popular today among the Turkic peoples. And this is precisely the main "suppliers" of fighters for the detachment.

So who are they? Why today they can be seen in training in clubs and shooting galleries in Russia? Why replenishment for TURAN'a preparing in private sports clubs? The answer is simple. PMC!

Yes, war for some category of people is nothing more than work. Routine work for which well paid. Praising these people or condemning stupid. The state, any and with all its might, sometimes cannot solve the same tasks that PMCs decide. It can not, precisely because it is a state. A "private trader" can. He is mobile and fully prepared. Not limited in the choice of fighters. Private owners are not interested in the citizenship of the employee, his ethnicity, his worldview. And numerous media reports about the success of TURAN are nothing more than an advertising campaign to attract new employees.

Stories about TURAN’s belonging to the special services from the series “one woman said.” Although deny that it is possible, I repeat, it is possible that the detachment performs some of the “requests” of specialists, it is impossible. Dans la guerre comme à la guerre. The main thing is that the detachment acts on the side of the front line from which we need it. So, TURAN is doing the right job, so they don't talk about it. And it does it well, again, judging by the videos that are uploaded to the network.

Looking through the western editions, I noticed that today TURAN is often used to explain Russia's aggressive policy. In particular, some Western analysts are directly talking about the military unit, which is intended not so much to fight terrorists, as "to attract peaceful Syrians to the side of the Kremlin." Alas, but the war in the information field continues. And, as you can see, any means are used to prove to the American and European average man the need to increase military budgets, the need to prepare themselves for war. And by and large, instill the inevitability of war ... These are the modern realities ...

Ctrl Enter
Noticed oshЫbku Highlight text and press. Ctrl + Enter
We are
Reports from the militia of New Russia for 7 September 2014 of the yearIn the center of Moscow a nest of “aliens” appeared: the installation with the eggs of the “fifth column” was exhibited in Novopushkinsky Square and at the editorial office of Echo of Moscow on the New
Military Reviewin Yandex News
Military Reviewin Google News
36 comments
Information
Dear reader, to leave comments on the publication, you must sign in.