Predator from Borisov: test of the newest Belarusian armored car designed by a girl

July 1 2017
112
She can climb the almost sheer wall, she is not afraid of off-road, on which KamAZ will sit, she will overcome the puddle where the tank will sink. 42.TUT.BY exclusively tested the newest Belarusian reconnaissance and patrol vehicle “Caiman”, which will be shown for the first time at the July 3 parade. 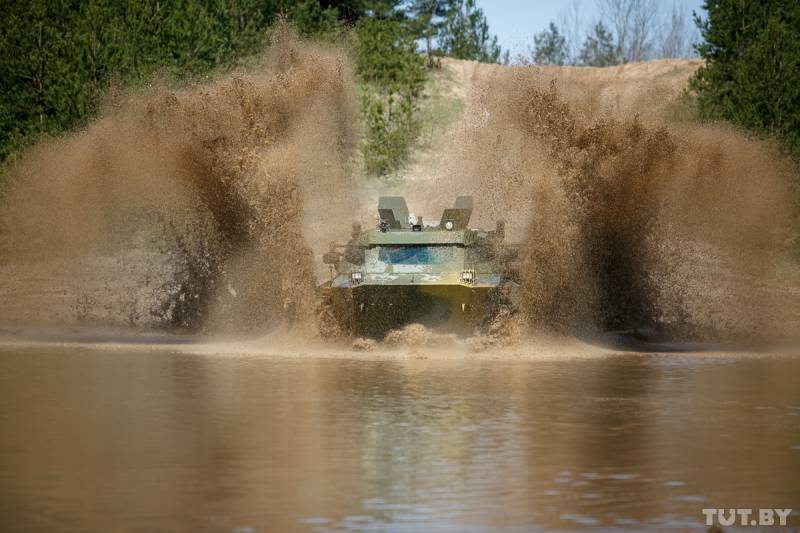 To do this, we went to Borisov to the landfill of JSC "140 repair plant." Before us, driving this armored vehicle was visited only by army specialists and Hollywood action star Dolph Lundgren. We found out why the Caiman is not sinking and what happens if you click on the button on the dashboard with the image of a turtle.

The girl who builds armored vehicles

Alexander Churyakov, the director of the enterprise, himself came to accompany the journalists on a small tour of the plant. According to him, the head of state commissioned them to create a light armored vehicle. 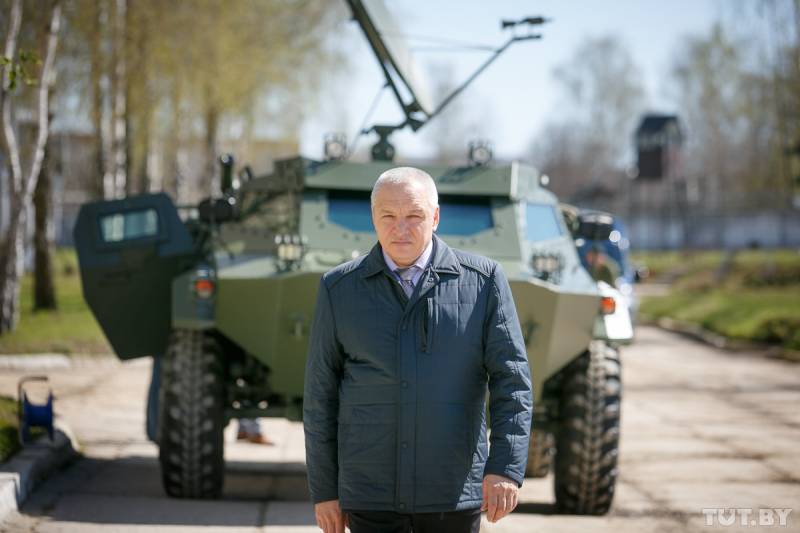 - It took us three years to develop an armored car from scratch. The prototype was collected last year. At that time, many media outlets wrote that the Cayman was built on the basis of the BRDM-2, but this is not so. We only in the running layout used a couple of elements of the armored hull of this Soviet armored vehicle. In the serial armored car hulls are unique, as are the cars themselves. In its class, the Caiman is cheaper than most competitors with high combat effectiveness. However, more about the car will tell you its designer. 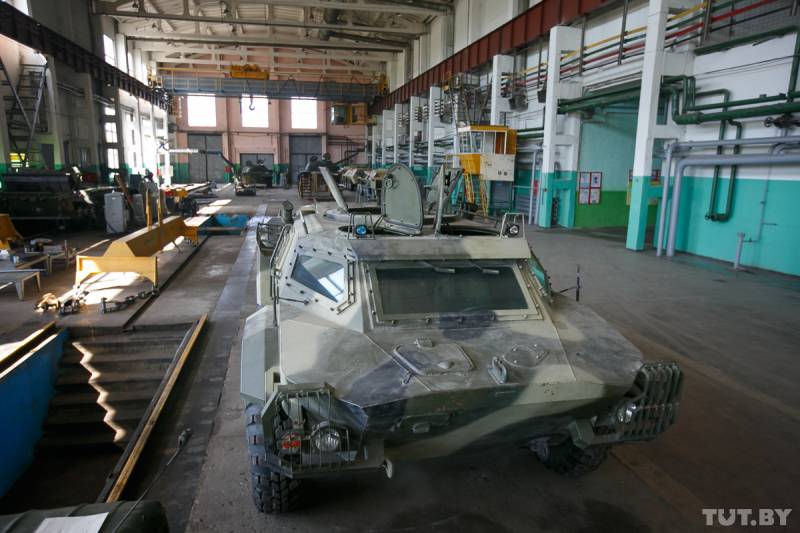 The first model of the armored vehicle "Caiman"

Having finished this phrase, the director pointed to a fragile girl who stood a little away from one of the assembled “Caymans”. The armored car is obliged to it - the chief designer of the enterprise Olga Petrova - for its unusual appearance, high traffic and protection. 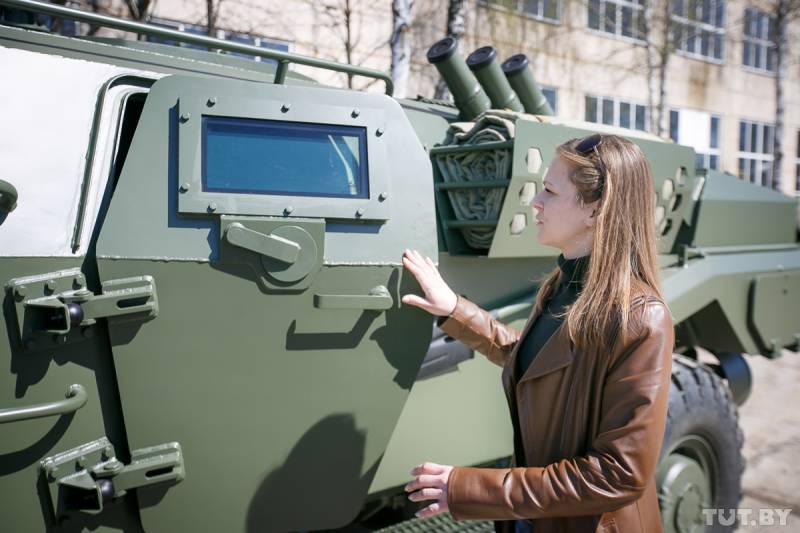 - When developing the Caiman, we tried to make it as reliable and maintainable as possible. - An armored vehicle with non-serious combat damage can be repaired right in the field by the crew, ”says Olga. - The machine is able to protect the crew from bullets and shrapnel. In the frontal part, the protection of the Caiman is higher than that of the BTR-80. Armor, corresponding to the fifth class, confidently holds the armor-piercing incendiary bullets fired from the SVD sniper rifle. Mine protection at the Caiman is also provided for - the bottom is partially V-shaped, the floor at the landing sites and the crew is reinforced with additional armor. 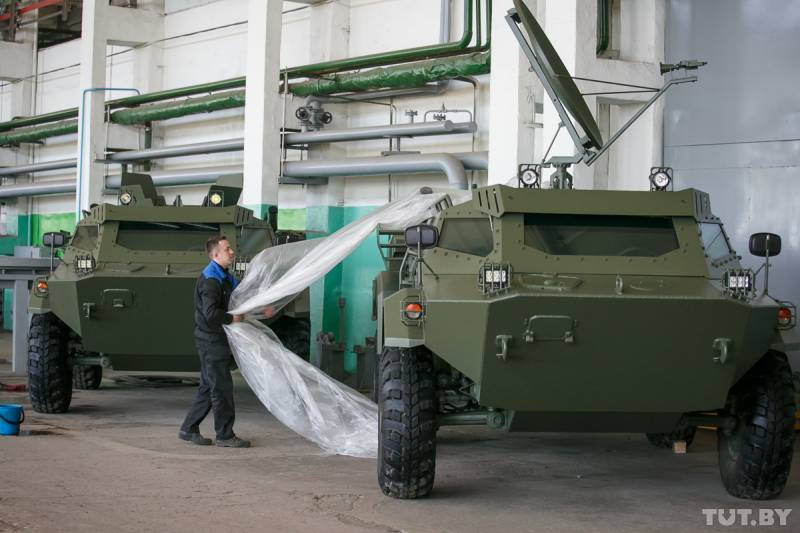 Olga graduated from BNTU with a degree in Instrument Engineering and Household Appliances, and at 140, the plant came on the advice of a friend: “... if you want a tremendous experience in the field of design, come to the enterprise”. In August of this year it will be exactly nine years, as the girl works at the enterprise.

By the way, “Cayman” is not the only child of Olga, the girl developed a project for the modernization of the BTR-70MB1. The new vehicle in combat and operational capabilities is not inferior to the BTR-80. Novelty appreciated in the Belarusian army and adopted.

When developing the Caiman, one of the most important requirements was a high degree of localization. According to Alexander Churyakova, many structural elements have been re-designed. For example, transfer case and water propulsion. The latter allows the Cayman to swim at speeds up to 8 km / h. But the most important thing is that the armored car, like other machines, does not take time to prepare to overcome the water barrier. The car can drive into the lake on the move, and the rowing screws are turned on by a toggle switch from the passenger compartment while driving.

If water got into the case, a special sensor on the panel will inform the driver about this. From the cabin, the pump is turned on, which pumps out the remaining liquid.

“In this machine, 67% of Belarusian components, we plan to increase this figure in the future,” says Alexander Churyakov. “For example, an engine assembled with a reinforced box developed at the Smolensk Aggregate Plant, is supplied by the Minsk Motor Plant. We still buy bulletproof tires in Russia, but now we are negotiating with Belshina about the development of such tires. The mover that allows the Caiman to swim is our own development. It was created from scratch, specifically for this armored car.

In order to find out what the Cayman is capable of, we go to the nearest training ground, where we are trained by tank crews and infantry fighting vehicles. The terrain cut by caterpillars, with huge mud-flooded areas filled with water, at first glance seems insurmountable for a wheeled vehicle. 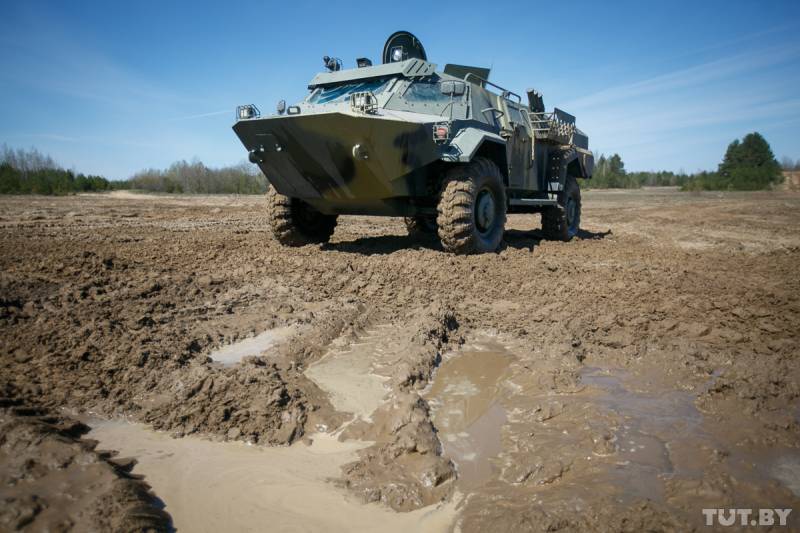 But, as the creators claim, for “Caiman” this is the usual habitat. Check? First, an experienced test driver demonstrates what this machine is capable of. Before our eyes, an armored car easily drives into a hill covered with clay and turf almost at an 45-degree angle. 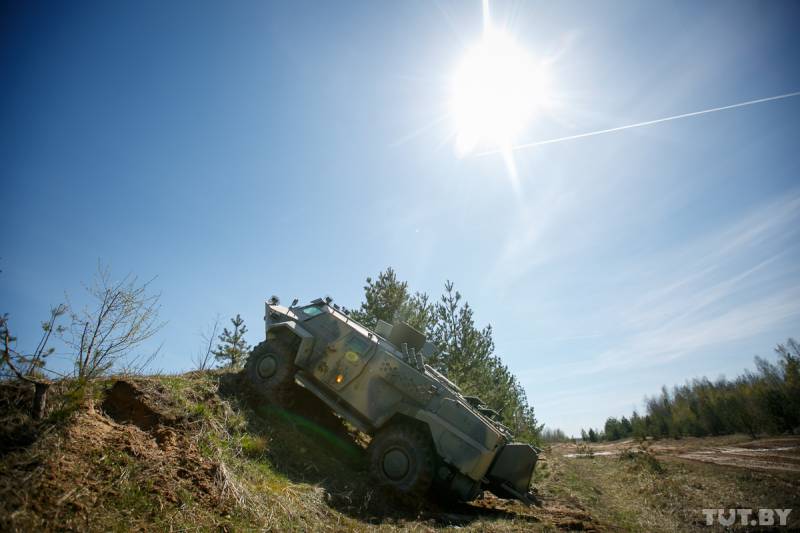 Then, at the request of photographers, climbs up on a high hill in order to effectively crash into a huge puddle. Seven tons of steel raise a wave of spray and dirt, and the armored car goes into this mess through the hull. The driver is asked to wait a couple of minutes to make a good shot.

All this time, "Caiman" stands in the middle of a small mud lake and, like a real predator, in whose honor he received his name, heats himself in the sun. The armored car gets out of water captivity so easily, as if it moves along asphalt.
Swallows pits for breakfast

It’s time to get behind the wheel of the Caiman yourself. The dashboard is not much different from a conventional car. At the bottom there are three pedals: gas, brake, clutch, so the time for getting used is minimal. The instructor immediately warns that the pedals are set up for an armored troop-carrier — soldiers are trained on the Caiman, and so familiar to them. 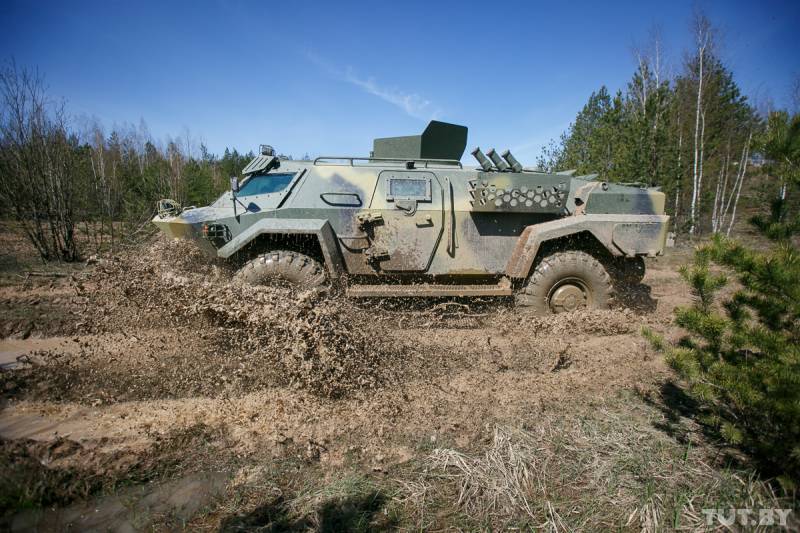 Indeed, the pedals go pretty tight, but getting used to it is a minute thing. Under the hood of the Caiman, an 170-strong diesel engine is installed, which consumes 24-25 off-road liters per hundred. By the way, the reserve of the armored car reaches 1000 km, this is enough to drive almost twice from one end of Belarus to the other. By the way, the motor has high torque - 515 Nm.

The first gear is short, it is needed to get off the ground, then you need to turn on the second one and, after adding gas, go to the third one, on which the Cayman usually moves off-road.

Transfers are included quite unusual. The first is down and to the right, the second is down and in the middle, the third is up. The fourth and fifth did not have to use. They need more to move on the highway, where the Caiman is able to reach speeds in 116 km / h. 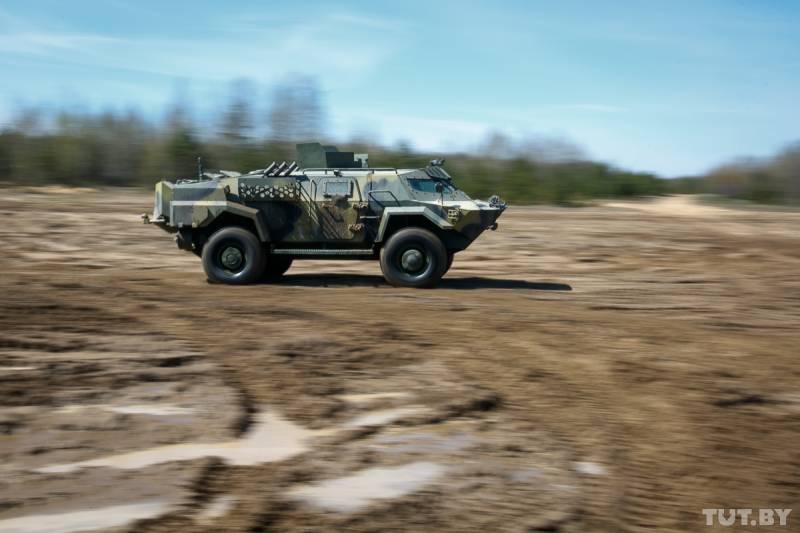 Meanwhile, the car gets under way. Unaccustomed to linger with the inclusion of the second gear, but the armored car does not stall, but quietly waits until I find the gear.

Rides over rough terrain "Cayman" very smoothly. Yam car just does not notice. Passengers do not notice them either - it seems that you are driving on a flat road.

This merit suspension armored vehicles. She is independent here, with two levers per wheel. Mounted strut and reinforced springs.

Handling "Caiman" deserves special mention. The steering wheel is spinning with one hand, and the car is very sensitive to any manipulation. Feels like a real foreign car.

Terrible outside, comfortable inside

In appearance, “Cayman” seems very large, protected and impregnable. Peering into its narrow mirror-loopholes, you worry that visibility will be worse than ever. Immediately I remember the ordinary joke about parking by sound. But this is only a first impression. 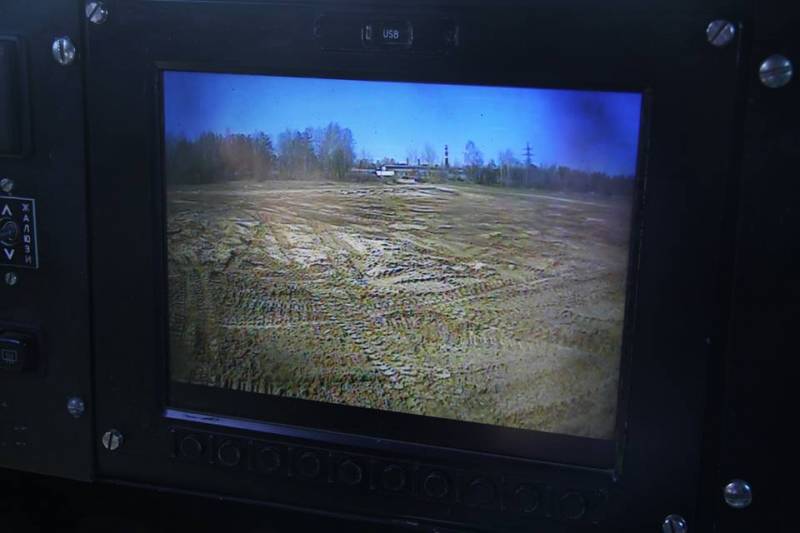 Front and rear "Caiman" cameras are installed, which give the driver a great view. Frontal armored glass has a double heating circuit: the internal one saves from misting, and the external one - from icing.

Janitors hidden under the armored visor. By the way, the mechanism of work of the side window brushes is almost eternal - it is set in motion by hand. 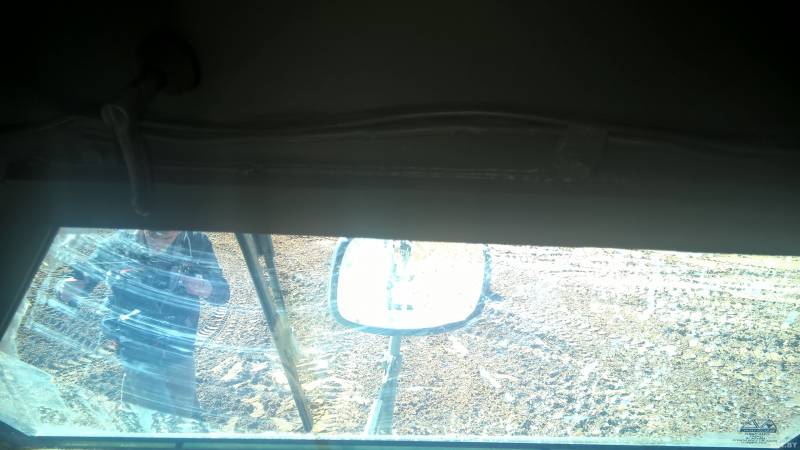 The display, which translates the image from the cameras, is quite large and informative. You can also display navigation information, data on the status of systems and components of the combat vehicle, and other information.

Well, "Easter eggs" for those who read the material almost to the end. On the dashboard of the Caiman there are two interesting buttons, one depicts a hare, the other a turtle. What are they for? 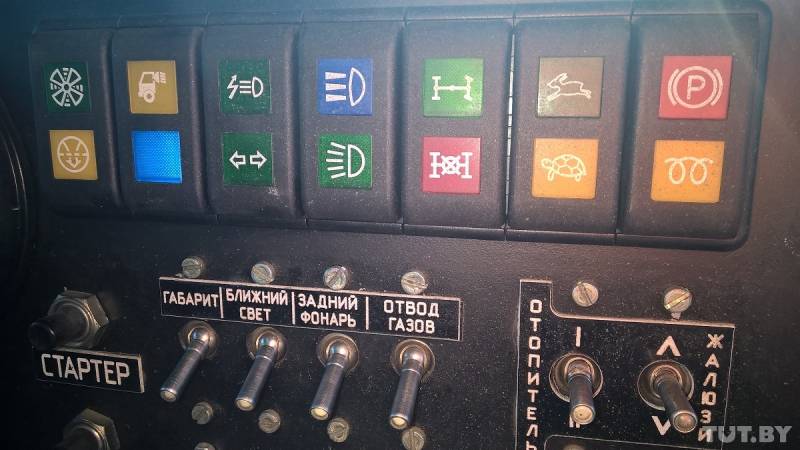 It turns out that everything is simple: a turtle is a low gear, a hare is an increased one. In my opinion, cool design find. It would seem a trifle, but adds great comfort inside and relieves tension, which is so much in military service. Looking at the buttons, you just want to smile and be sure to press one of them - at least just like that. 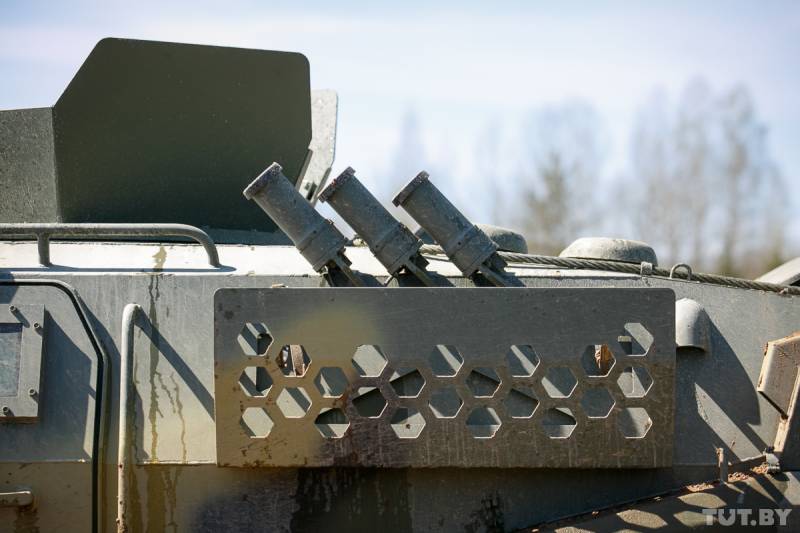 Smoke grenade launchers that fire aerosol grenades that hide the Caiman from the enemy in the optical and, in some cases, in the thermal range

Places inside the "Caiman" more than enough. The crew of the armored car - six people - will be located here with comfort. You can get inside through a side door or a pair of hatches above the driver and passenger seats. Another large hatch is located in the middle of the crew compartment. You can pop out of it and shoot from a Kalashnikov machine gun (PC), from an AGS grenade launcher or from a 12,7 machine gun of mm. In this case, the folded manhole cover is an armorrest for a fighter who is operating a machine gun or a grenade launcher. The shooter itself is on the lid of the transfer case.

On the "citizen" also fit

According to the results of the car made a good impression. A wide range of weapons, up to the installation of a remotely controlled module "Adunok", and high maneuverability make the Caiman a formidable enemy. 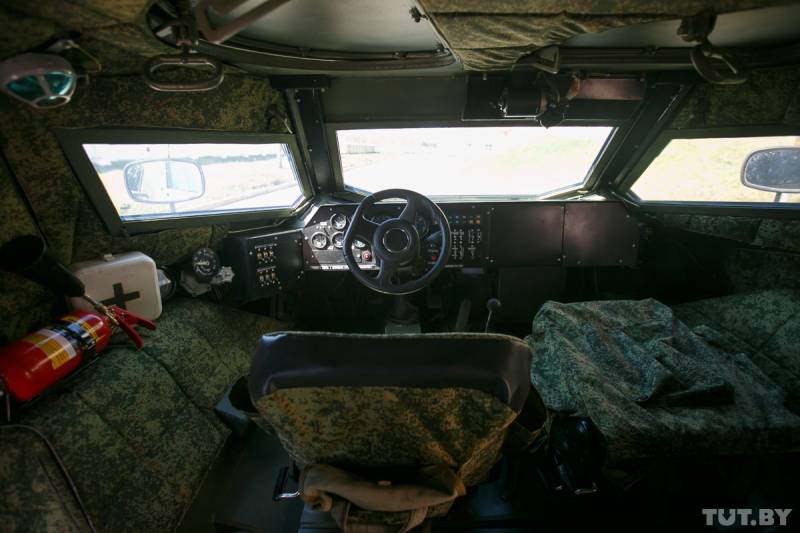 But it seems to me that the armored car has a place on the “citizen”. A spacious cabin can accommodate several people at once, the car keeps afloat perfectly, it has a huge power reserve, and you can move along the roads. 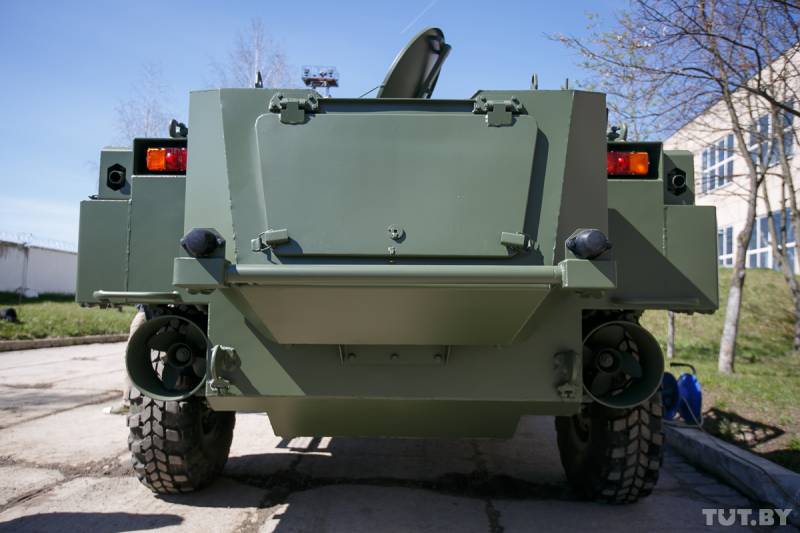 Special armored box for paratroopers property. Now bulky backpacks can not be stored inside the armored car

Four-wheel drive, centralized tire inflation and high torque at the diesel will help to cope with any off-road and not depend on the service.

In civilian performance, this is an indispensable thing for a fishing trip by a large company, and you can go fishing right from the board in the middle of some deaf lake, where the way is ordered to regular transport. After all, there are civilian versions of the BRDM, why not the Caiman?