Russian army through the eyes of an eyewitness 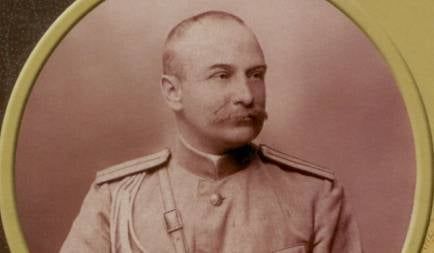 Col. E.Nikolsky - passed a large military school. Cadet, a young officer of the imperial army. Then in 1905 – 1908. He was in charge of "Special Office Work" at the Military Military Department of the General Staff and was responsible for working with military agents. He prepared a project to create in Russia ... intelligence. Main Intelligence Agency. It is according to his templates that this our special service will be created only not by the tsarist government, but by the Bolsheviks.

I will say right away - the book of Nikolsky is so interesting that we will come back to it. Therefore, I will not talk about his future fate yet.

So, the word to Colonel Nikolsky (Quotes from the book E.Nikolsky. Notes on the past. The Russian way, Moscow, 2007)

It is interesting to recall the general material side of life.

Military units of the late XIX century. For some reason, the arrows were considered as “young guards” as rights, but differed from ordinary infantry troops only in that soldiers and officers received slightly more salary, compared to infantry. So, a soldier received more on 3 or 4 a penny in a quarter of a year, an officer for a rank higher received more on 1 a ruble and 25 cents per month. All the content obtained by the officers was composed of the following parts: salaries, canteens and apartments. In addition, a small amount was given for lighting and heating. Second Lieutenant received a salary - 26 rubles 25 kopecks, canteens - 15 rubles, apartment - 112 rubles per year and about 20 rubles for heating and lighting. Salaries and canteens were issued monthly, and apartment money, for heating and lighting - once every three months. Total per month - about 53 rubles.

It should be noted that there were mandatory expenses: monthly deductions were made from the content to the officer’s meeting, the library, to the “loan capital”, to the uniforms artel, to set up a regimental holiday, to celebrate the New Year, to break off on Easter day, various evenings and meetings of superiors and inspecting the regiment of persons. Thus, the junior officer received on a monthly basis with the most accurate life no more than 30-35 rubles, of which he had to pay for the apartment and to the meeting at the table no less than 25 — 28 rubles. What was left to other necessary expenses, such as a washerwoman, buying new clothes?

The shooter received money 54 pennies every three months. The cost of food for the regiment was 1 / 2D a pound of meat with bones and fat, which was supposed to be 6 spools ** per day and, moreover, the cost of a certain amount of greenery is all based on local reference prices of products. In general, the entire holiday for food soldier did not exceed 7-9 kopecks per day. The commissariat didn’t count for rye flour and buckwheat and millet for the calculation of 2,5 flour and 32 of buckwheat or barley grits per person per day. That's all that the government gave the soldier; There was no tea, no sugar, no coffee, no oil, nothing more.

When the soldier got up in the morning, he drank, if he had his money, his own tea with a small piece of his sugar and black government bread, which he was allowed to pay by the calculation of 3 pounds per person. If the soldier had no money, he drank one hot water with bread in the winter, when there was a need to warm up a little, getting up from the cold bed. But not in all parts of the troops a soldier received his 3 pounds of bread in his hands and could eat it when he wanted. In military units in which commanders observed special savings, the so-called tray allowance was applied. With this method, soldiers were not given any bread for 3 pounds each in their hands, but, while they were eating, cut the bread into pieces. The soldiers took from the crowd as much as they wanted. Few of them in this order were able to eat their 3 pounds, some of the bread was not eaten and a considerable saving of flour was obtained, for which the commissary returned the regiment with money received in regimental economic sums. But the soldier did not have bread for the morning.

Normally, in the army units located in the provinces, even in specially built barracks there were no separate rooms for canteens. The barracks were built and even more so were hired from private individuals of the smallest possible amount, and savings were being pursued in rent, heating and lighting. There were usually no even rooms for practicing verbal science and teaching soldiers to read and write. Classes were held right where they slept, while the soldiers sat in groups on their beds. The barracks consisted of one large room, in which the soldiers spent all their time of study and rest, and two separate rooms, of which in one was placed the company guard, and in the other the sergeant-major and the company office. Sometimes there were small rooms for company workshops.

At twelve o'clock in the afternoon was lunch. The soldiers went about into the kitchen with kettles and received soup or soup with cereals and greens, a portion of boiled meat, consisting of small pieces strung on a stick, and porridge with bacon. Lunch was not varied. Soups - borscht, cabbage soup or potato, porridge - buckwheat or barley. That's all the soldiers' lunch menu. In the posts of Rozhdestvensky and Great meat was not given, it was released for everyone for the soup A, a pound of dried or salted fish. Commonly roach or pike perch. For dinner at six o'clock the soldiers received leftovers, if there were, soup from dinner, and porridge. That's all what fed our army.

The guards had a greater money vacation *, and units of the troops stationed in settlements had their own plots of land on which gardens were planted, and therefore they improved the food with money that was used for greens.

The soldiers slept either on general bunks, or, if the regiment had sufficient economic sums, on separate beds. There were no holidays from the treasury to the beds, as well as pillows, blankets and bed linen - the soldiers had, if they could, their own. The shelves, if economic sums were sufficient, wound up blankets.

The economic sums were formed mainly from savings of the remains of food, released directly by the commissariat **, savings on lighting the barracks and their heating. Usually after busy, i.e. at five o'clock in the afternoon, twilight reigned in the rooms, as the most limited number of lamps burned. It was the same in the cold season - not everything was heated by the furnaces, but by turns, and meanwhile, the money for heating was supplied according to the calculation of all the furnaces and for all cold days.

The soldiers were washing their dirty laundry in the bath while washing. They visited the bath once every two weeks, and meanwhile, military units received money for washing people and their underwear separately by calculating the number of soldiers and for each week.

Only after the first revolution did the government catch on, and the commander-in-chief of the St. Petersburg Military District, Grand Duke Nikolai Nikolayevich, issued an order promising to increase the contents of both officers and soldiers in a very short time and improve their life. Indeed, the content was soon added to the officers: the younger ones - by 25 rubles per month, the older ones - respectively, more. The following salary was assigned to the soldiers: to a private officer - 50 kopecks per month and to a non-commissioned officer - a little more. The life of a soldier was significantly improved: tea and bed allowances were established, and the money supply for food was increased.
But these measures were not sufficient either, since both the monetary allowances of our army, and food, and the content in general, lagged far behind the expenditures on the allowances of the armies of foreign countries.

My comment: The same question is often asked: why did the Anglo-Saxons succeed in covert operations? Where did Russian intelligence and counterintelligence look?

Nikolsky gives the answer to these questions.

Just remember - the project to create the Main Intelligence Directorate (still a project!) Was written by him ... in the 1907 year!

Until this year, there was simply no intelligence in Russia.

This question I would like to ask the sovereign. So it will not answer already.

The results of such a tragic blindness, we all know.