Americans can't even agree on a battle, much less win the war ("The National", United Arab Emirates) 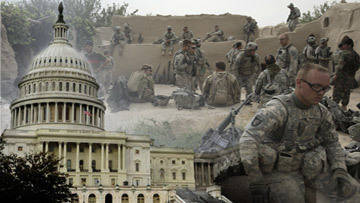 There is a common misconception that only one war is fought in Afghanistan. In fact, there are at least three conflicts at the same time, which may explain why so little has been achieved in nine years.

The war in which the United States and the allies are fighting against the Taliban is the one that is shown on TV. There is a picture, there is drama and the pain of loss (among military and civilians), there are biting words of generals, supported by the weight of their medals and form.

This week, the generals expressed their thoughts, suggesting the following recipe for success: more time and more support on the political front.

General David Petraeus, commander of international troops in Afghanistan, believes that thanks to the influx of fresh forces he was able to "reverse the movement" of the Taliban in the south of the country.

Known for his frankness, the commander of the Marine Corps, General James Conway (James Conway) openly opposes the plans of President Barack Obama to begin withdrawing troops from next year. According to him, the marines are not ready to transfer responsibility for ensuring the security of the Afghan army either next year or in the near foreseeable future.

“You can either lose quickly or win slowly,” said the general.

It is clear that it is advantageous for the military to talk about victory in terms of prestige and budget, despite the gloomy example of Iraq, from which all the combat units of the US troops have recently left without defeating the rebels and without ensuring political stability.

The second theater of operations in Afghanistan is a “peaceful” struggle to create stable leadership, which the Americans can entrust the country to after leaving. This struggle, waged behind closed doors, aims to transform an unmanageable community of tribal groups into a kind of modern state. The battlefield in this fight was the personality of President Hamid Karzai.

Stunning material was published in the Wall Street Journal, ripping covers from the problems associated with the transformation of Hamid Karzai into the national leader of the kind that the US needs. The article depicts Karzai as a sullen and unreliable man, subject to emotional outbursts, which only the head of the CIA station in Kabul, who is called a “blanket” for the president, is capable of extinguishing.

The head of the CIA station — not one of those “tricky foxes” from the Ivy League, whom they like to portray in Hollywood films — is a normal military executive. He served in the Marine Corps, and in 1970's he joined the ranks of the armed division of the CIA. In December, 2001, along with Karzai, attended a meeting with the elders of the tribe, which was inadvertently bombed by the United States. The tsrushnik rushed to protect the future president and, although he did not save his life in the full sense, became his friend for a long time.

The drawbacks are not without one; when things are going badly, any leader can be portrayed as a weak and dependent person. If Germany had crushed Britain in World War II, Winston Churchill would have remained in stories depressive alcoholic. But he led his country to victory, and forgot about the shortcomings.

The war waged by General Petraeus cannot be waged in a political vacuum. This means that the character of Karzai is a matter of key importance. If the country does not have a strong leader, a working government and a reliable army, the blood of the Americans will be shed in vain.

Everyone is well aware of the third theater - this is a showdown between the centers of power in Washington, arguing over the vector of Afghan politics. We can already see how the military are resisting Obama’s plans to begin withdrawing troops from next year in order to be in time for the 2012 elections. But yesterday, a more vivid example of how Washington is trying to pull simultaneously in several directions appeared.

The Obama administration is trying to curb the overwhelming corruption that has hit the government, and to create independent anti-corruption agencies. It is estimated that at least a billion dollars are exported annually from politicians, field commanders and drug lords. In July, Afghan agents, with US support, arrested Assistant Karzai Mohammad Zia Salehi, who was allegedly demanding a bribe to stop the investigation into a profitable remittance agency.

Karzai canceled the order to arrest Salehi, and he was released, and then cries of horror came from Washington. Yesterday, the story received a new turn: the New York Times reported that Salehi had been a CIA agent for many years. The CIA, of course, believes that keeping influential people “under the hood” is more important than ideologically fighting corruption.

The current situation reminds me of what happened to the Russians in the last years of their ill-fated occupation of Afghanistan in the 1980s.

They made the president of the deceased (and now forgotten) Babrak Karmal, ordering him to spread communism in the country. But this only added fuel to the fire of resistance to the Soviet occupation. The Kremlin began to lose faith in Karmal. He was called "nothingness." Karmal began to whine and complain to his masters: "They put me here, now protect me."

The Kremlin, negotiating the withdrawal of the 40 Army, replaced Karmal with a strong leader, the head of the secret police Najibullah, whom she refused from the communist ideology and surprisingly successfully fought against the Mujahideen, until Russia stopped supplying it weapons and oil.

I do not compare the characters of Mr. Karzai and Comrade Karmal. I am not familiar with any of them, although I remember how in 1980, Karmal came to Moscow and was greeted as the savior of Afghanistan.

Unfortunately, this is not a question of character, but an irreversible process. In Afghanistan, with its culture of rabid independence, leaders who hold power on the bayonets of foreigners quickly lose their credibility. It is hardly possible to fulfill the requirements of the occupiers and at the same time not to lose the trust of the elders of the tribes.

Most likely, Karzai will resign, and the political vacuum in which men and women are fighting under the leadership of General Petraeus will sooner or later be filled with a new strong leader of Afghans.