LDNR: Kiev option of "reintegration" - a new path to the massacre in the Donbass

21 2017 June
15
Before the start of the negotiations of the Contact Group on the settlement of the conflict in the Donbass, the head of the delegation of the LPR made a statement about the appearance in Kiev of plans to withdraw from the so-called Minsk format. The point is that in Kiev they previously announced that they are ready to complete the "ATO", as required by the Minsk Agreement. At the same time, the Ukrainian authorities add that by and large only the name will change, and the military operation against the Donbass using different types of weapons will be continued with the introduction of martial law in the areas adjacent to the contact line. Kiev’s task is to declare itself the party that fulfilled the Minsk agreements, for which the next defamation is held.

According to Vladislav Dayn, who leads News Front, the Ukrainian authorities are preparing the ground for the start of open hostilities in the Donbas. 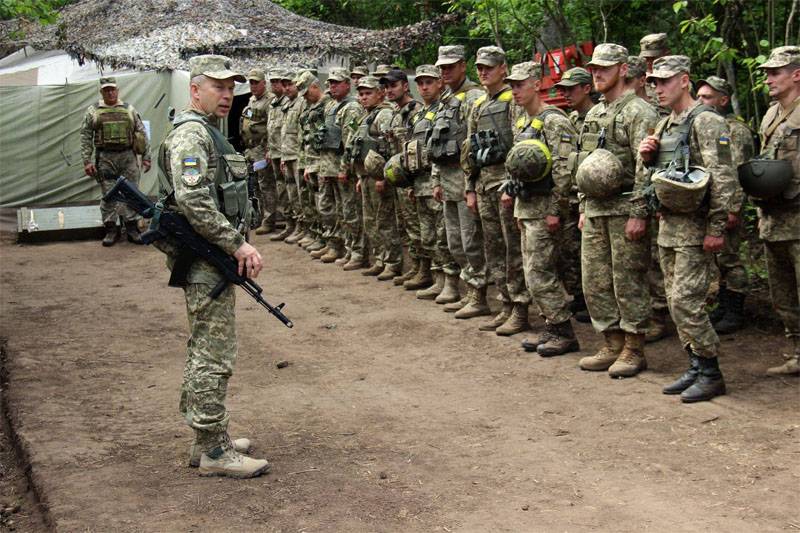 From the statement of Vladislav Dayny:
Stating at the same time that the main task of changing the format is the protection of humanitarian rights and the “reintegration of Donbass”. In fact, all the rhetoric of Kiev on humanitarian rights is a reaction to our humanitarian program for the reunification of the people of Donbass, which really works, and which has already been used by a lot of people from the territories controlled by Kiev. Statements by a number of Kiev officials about certain humanitarian prospects of replacing the “ATO” with martial law are, obviously, pure speculation. Never has martial law improved the humanitarian situation. And if we take into account the intention to completely replace the civilian territorial management of military structures, which is written by the same Ukrainian media, it becomes clear that Kiev follows the logic of NATO, hiding behind imaginary humanitarian goals.
The substitution of a “Special Status” for a certain new substance, attempts to impose martial law instead of real steps towards a peaceful settlement is a direct contradiction of the Minsk agreements. Any steps in this direction indicate Ukraine’s withdrawal from the Minsk process.

It is noted that with its steps Kiev continues to reject the Donbass. Also, the representative of the LC in the Contact Group reported on the likely actions of the representative of Kiev in the same group:
We expect that (Irina) Gerashchenko will make another attempt to deceive the public and the guarantors (from the "Norman Four"), showing a document in Minsk, and will immediately announce its approval in the Contact Group. Most likely, in Minsk there will be an attempt to pass the desirable for the real. Gerashchenko will say that there is a bill that will wave a piece of paper. And then he will come home and say that "I submitted a bill in Minsk." About that I expect.

Commented on the "ideas" of Kiev and Denis Pushilin, who heads the delegation of the LC in Minsk. According to Pushilin, the Kiev documents on "reintegration" that do not take into account the opinion of those whom Kiev is going to "reintegrate" pose a new threat to peace in the region.