Knights of the East (part 4)

Let there be grapes from a single vine!
Let all the vegetables from the related ridges be!
Live well, children, on the sinful earth,
As long as there is bread and wine on the table!
("The Stranger" Rudyard Kipling)

However, all these events, very remote from the Ottoman Empire, had practically no effect on the armor and weaponry of the Turkish knights. The backbone of the Turkish cavalry both in the XVI and in the XVII centuries continued to be chebels (i.e., "armor"), armed with sabers, clubs, light ends, light spears. Sipahs and Timarios (holders of land possessions who were granted military service), as before, went to battle, being chained in chain mail and Bahterians. Of offensive weapons they still used bows and arrows. Over the chain mail they now increasingly put on a mirror (armor with solid forged plates on the chest and on the back, polished to a mirror shine), because of which it was called so in Russia. The Turkish helmet Kulah gradually transformed into the Russian Shishak, which almost all the peoples of Eastern Europe gradually began to use. Metal bracers for the right hand, which covered the entire right forearm (the left and the brush were protected by a shield), turned out to be very comfortable. The horses were booked for a very long time and in this form were used in the war even at the beginning of the XVIII century. The latter is not surprising, since horse armor in the East, including Turkey, has always been much easier than in the West. The rider, who was sitting on an armored horse, naturally, had to have protection for his own legs, so armored boots made of steel plates, connected by chain mail, complemented his weaponry. They were also used in Russia, where they were called buturlyks. 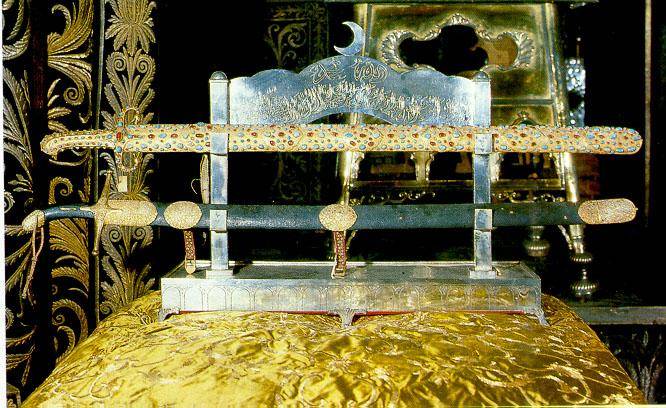 The sword and saber of the prophet Muhammad. Topkapi Museum, Istanbul.

The lighter and very courageous horsemen of the delhi (translated from Turkish “obsessed”) were usually recruited in Asia. Delhi was the easiest to arm, however, they also wore Yushmana plate-and-mail armor, light Misyuk helmets, and also elbow pads with shields. The Delhi cavalry used not only cold weapons, but also firearms, and the Europeans liked it very much.

In Western Europe, the more sovereign was, the more he had a flag, the longer the pennant of his knight’s spear and ... the train of his lady’s dress. In the Ottoman Empire, we see almost all of the same, and there also existed a clear hierarchy of banners and insignia. The symbol of the commander was al, nicknamed by the people as “the bloody banner”, which had the appearance of an embroidered cloth of bright red color, 4 — 5 m long and 3 m wide, narrowed downwards. Sandzak, the banner of the provincial governor, was somewhat smaller in size and less richly decorated. Bayrak - the banner of light cavalry delhi. Most often it was triangular and made from red or yellow canvas; the letters of the inscriptions were cut out of red or white felt and sewn onto the cloth, like the hand of Ali's revenge, and the sword Zulfikar.

The tug (or horsetail) was called a ponytail, mounted on a cylindrical, hollow inside and therefore an unusually light softwood pole; The shaft was decorated with oriental ornaments. The upper end of the shaft ends most often with a metal ball, and sometimes a crescent. Below was attached a simple or braided horsetail, painted in blue, red and black. At the site of attachment of the tail, the pole was covered with a fabric of horse and camel hair. Hair was also dyed in various colors, sometimes in the form of a very beautiful pattern. 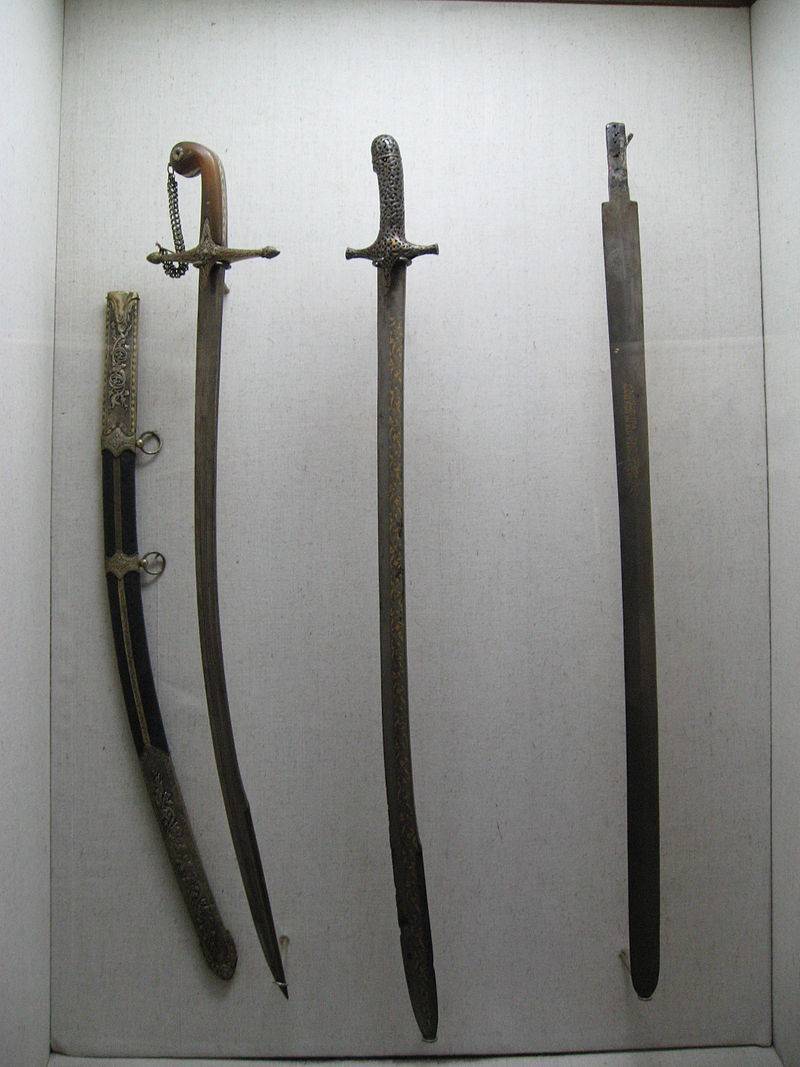 The number of horse tails on bunchuk was just a sign of the title. Three horse tails had the rank of vizier, two tails were governors, one had sanjakbeg (i.e., the governor of sanjak). Bunchuki wore silihdars (squires), which in this case were called tugdzhi. 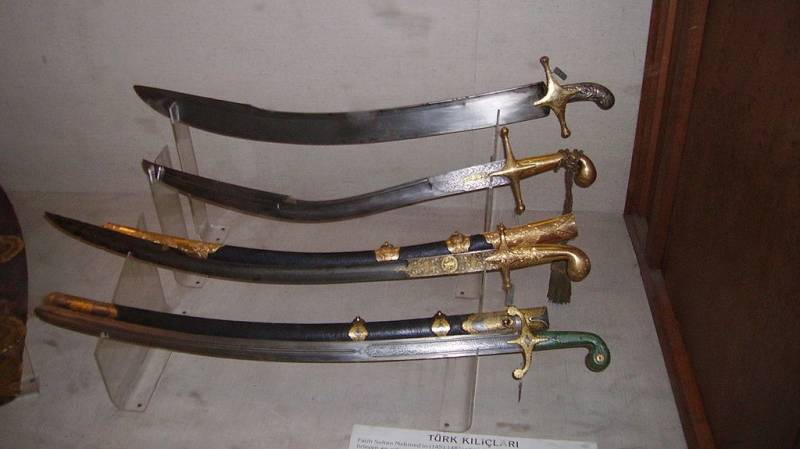 The blades of the Turkish sabers were at first slightly curved (XI century), but then they acquired a curvature, often excessive. In the XVI century, the Turkish saber had a smooth handle without a top, which in the XVII century acquired the well-known form of a curl of a shell.

In addition to the actual Turkish in the East, the sabers from Persia were much more popular - lighter and heavily bent in the last third of the blade. Usually they were already Turkish, but then they were shorter. Apparently, the heavy plates on the mirrors and yushmans with a Turkish saber were not pierced anyway, but the light Persian saber could have inflicted a very strong, secant blow to the enemy, which could well reach its goal in a duel with a poorly armed rider. 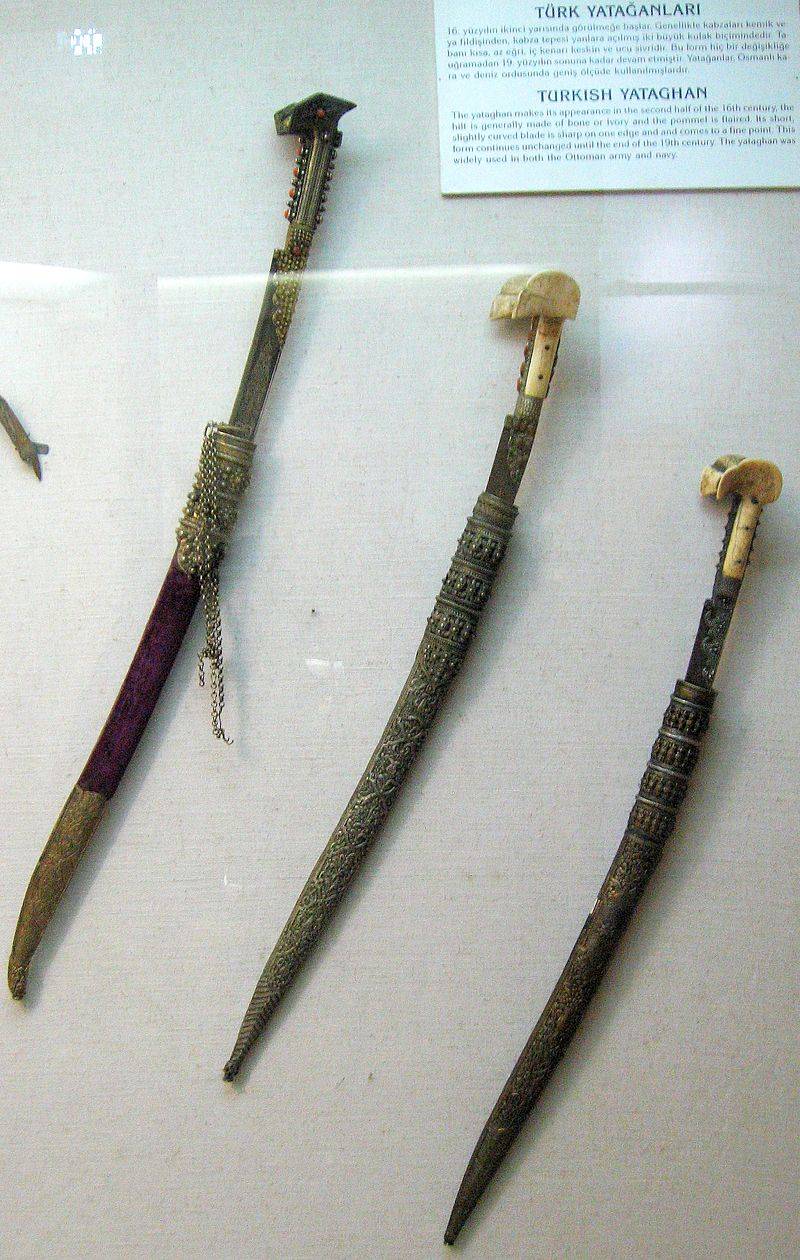 Scaffolds from the Topkapi Museum in Istanbul.

In the 16th century, a scimitar spreads in the Turkish-Arab lands - a relatively short blade, often with a reverse bend of the blade and without a cross, but with two characteristic protrusions (“ears”) in the back of the handle. The weakly curved blades of the Turks were called safe, and the strongly curved blades called Kilich. The Turks, like other Oriental peoples, greatly appreciated the ease of a spear, so they made bamboo shafts or drilled them from the inside. The award of the spear was a sign of special grace of the Sultan and was regarded as a precious gift. Notable Turks and Arabs decorated spears with golden cords and tassels and even carried a case on their spears in which a miniature Quran could be placed. 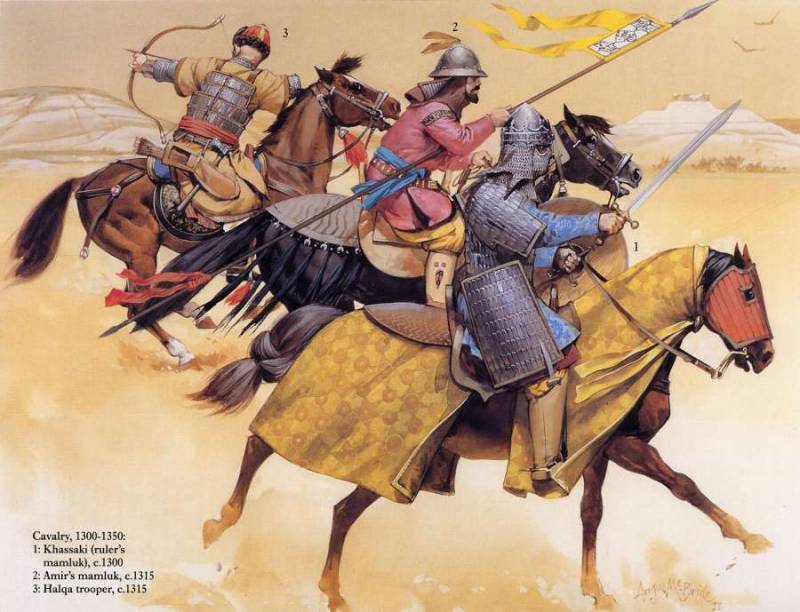 Enemies are hated and ... most often they are also imitated by him - this is a psychological phenomenon that Western Europe has not escaped during the wars against the Turks. The second time after the crusades, she paid tribute to the higher military organization of her eastern opponents. The fashion for everything Turkish at the end of the 16th century reached the point that in Germany, for example, horses were reddened to imitate the Turkish custom and their horses were almost universally borrowed from Turkey. 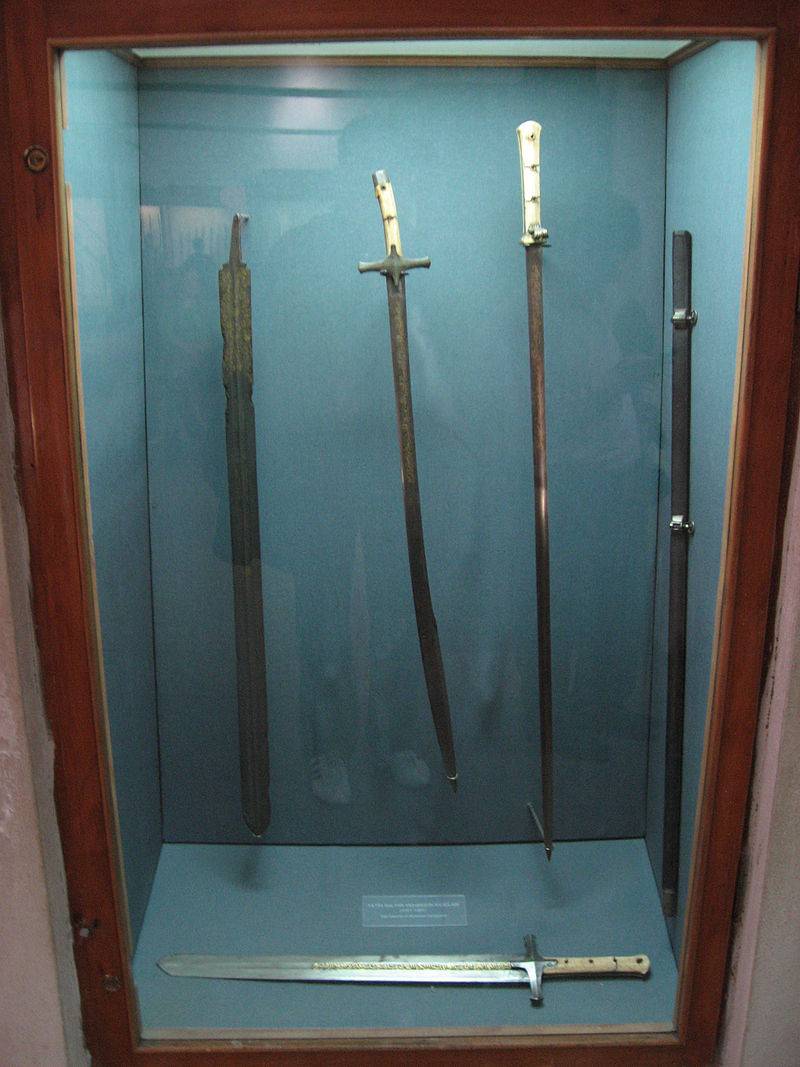 By the way, besides the device itself, their peculiarity was that they had a left fastening for the sheaths of the sword-konchar, which thus did not refer to the rider’s armament, but to the horse equipment! The European Stirrups also seemed very unusual to the Europeans. The fact is that neither the Arabs nor the Turks, as a rule, wore spurs, but instead used massive wide stirrups, the inner corners of which they pressed on the sides of the horse. 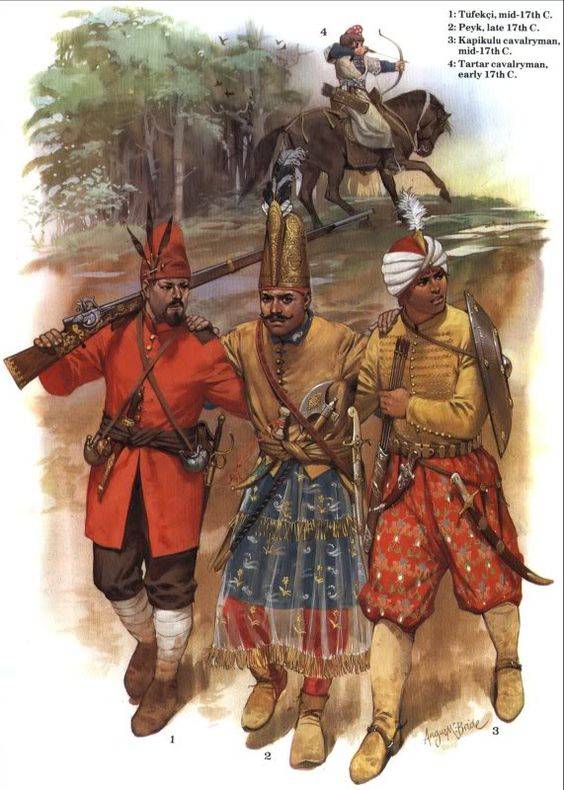 Despite the advanced improvements in military equipment, the Ottoman Empire fell into disrepair. 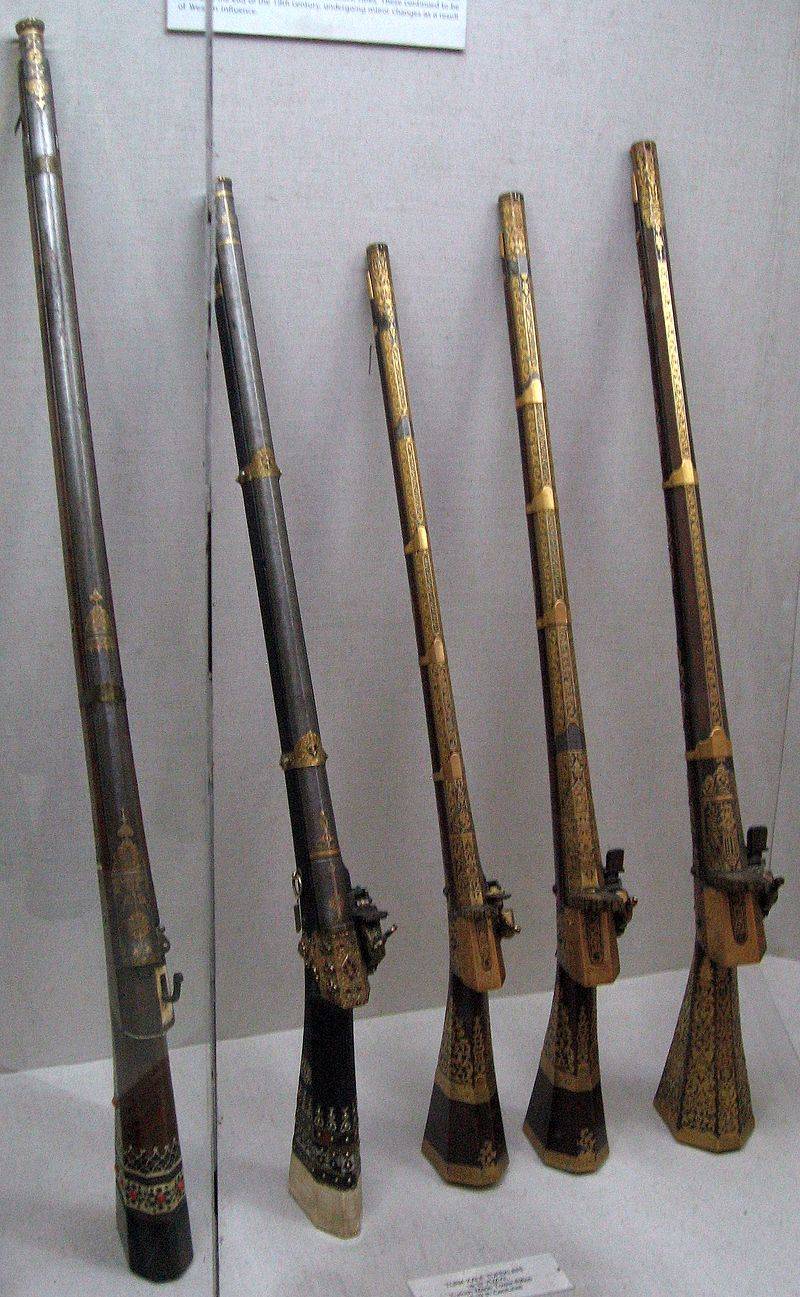 The decline of feudal-land relations and the ruin of the peasants in the same way as in Europe, led to a reduction in the number and fall in the fighting capacity of the knightly cavalry of the Sipahi. In turn, this forced more and more to increase the number of regular troops, and especially the Janissary Corps. In the 1595 year, there were 26 thousands recorded in the registry of the Janissaries, after only three years 35 thousands of people, and in the first half of the XVII century there were already 50 thousands! The government constantly lacked money to pay maintenance to such a huge number of soldiers, and the Janissaries turned to side earnings - handicrafts and commerce. Under any pretexts, they tried to avoid participating in the campaigns, but very strongly opposed any attempts by the authorities to at least somehow restrict their privileged position. Only in 1617 — 1623, four sultans were replaced on the throne because of the Janissary riots. 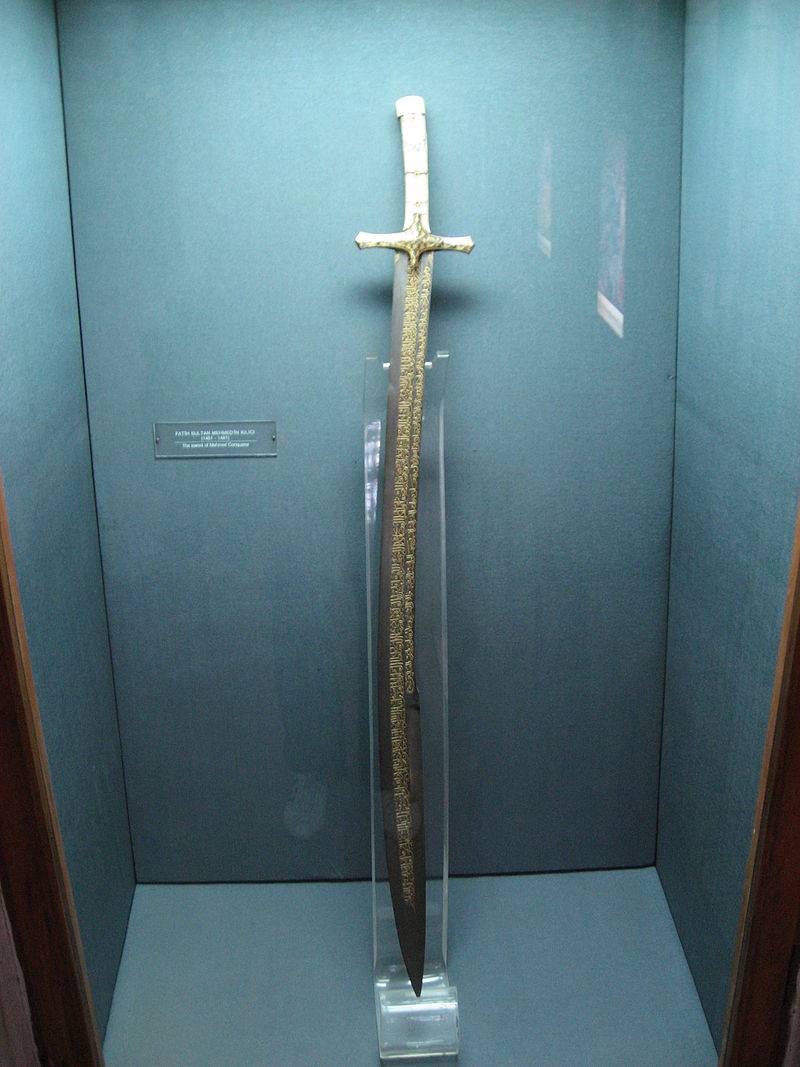 Such events gave contemporaries a reason to write about the janissaries, that "they are also dangerous in peacetime as they are weak during a war." The defeat of the Turks under the walls of Vienna in 1683 clearly showed that neither the Sipahian cavalry cavalry nor the Janissary corps * with a firearm could stop the fall of the military power of the Ottoman Empire. This required something more, namely, the abandonment of the old economic system and the transition to large-scale market production. In the West, such a transition took place. Knights of the West, having achieved maximum gravity and security in armaments, by the XVII century refused to armor. But in the East, where the armor itself was much lighter, this process stretched for centuries! On this road, East and West diverged not only in the field of armaments ... 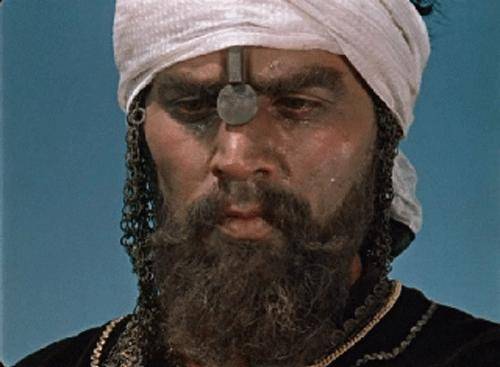 In 1958, the film studio Georgia-Film made the film Mamluk about the fate of two Georgian boys who were kidnapped by slave traders and died as a result of a duel with each other. Large-scale battle scenes were set up of course “so-so” (although the guns are rolled away after the shots!), But the costumes are simply gorgeous, the helmets are wrapped in cloth, and even the barmitsa are wearing little rings! In the role of Mamluk Makhmud Otar Koberidze.

* History The Janissaries ended in 1826, when on the night of 15 June they rebelled again, trying to protest against the intention of Sultan Mahmud II to create a new standing army. In response to the calls of heralds - to speak out in defense of the faith and the Sultan against the rebel-Janissaries - the majority of the capital’s residents spoke out. The mufti (chief priest) declared the extermination of the Janissaries a pious deed, and death in battle with them was a feat for the faith. Guns hit the barracks of the Janissaries, after which the troops loyal to the Sultan and the city militia began to exterminate the rebels. The Janissaries immediately condemned the survivors of this massacre, after which they were all strangled and their bodies thrown into the Sea of ​​Marmara. The boilers of the Janissaries, who terrified Christians and awe at the faithful, were publicly smeared with mud, the banners torn and trampled to dust. Not only the barracks were destroyed, but even the Janissaries mosque, the coffee houses that they usually visited were destroyed. Even marble tombstones, taken for janissary because of the felt cap depicted on them, resembling the long sleeve of the dervish Bektash's robe, were broken. The Sultan even forbade loudly to utter the word “Janissaries” itself, so great was his hatred for this former “new army”.