19 2017 June
17
The US Senate has approved new sanctions against Russia. However, Europe, and especially Germany, opposes increasing sanctions pressure on Moscow. Berlin's protest is not surprising: after all, gentlemen senators want to make the Germans dance to the American tune.


The "sanctions" bill, approved by 15 June, includes a special article, according to which the United States officially opposes the implementation of the Nord Stream - 2 gas pipeline. The same article establishes the priority importance of exporting raw materials from the USA to the EU markets.

However, a document approved by 98 by senators from 100, passed only the initial stage of approval. Further, the bill will go to the Congress. If the project is approved there, he will go to Mr. Trump’s signature.

It is obvious that the senators are planning to gradually strangle Russian exports of energy raw materials to Europe. New sanctions relate to banks and the oil and gas sector. It is clear that the senators decided to start with the "Nord Stream - 2", with the pipeline branch, which is supposed to stretch to the German Greifswald. A branch located along the bottom of the Baltic Sea would allow supplying gas bypassing Ukraine.

TV channel "NTV" cites expert opinion, political scientist Charles Ortel. “And if the bill is signed by the president, this may interrupt the process of building the Russian gas supply from the Baltic to Europe. It will slow down a huge financial project, ”he says.

Roger Munnings, chairman of the board of directors of the Russo-British Chamber of Commerce, adds: “If you want to impose sanctions, then do not engage in this business. Everyone suffers from this: America, Europe, Russia. I think that Euro-American relations will take a noisy type of negotiations, directed against the infringement of US sanctions. Europe will not accept sanctions. ”

It is precisely because of the “suffering” of the business that the Germans are protesting against the decision of overseas senators who have turned to Russia. 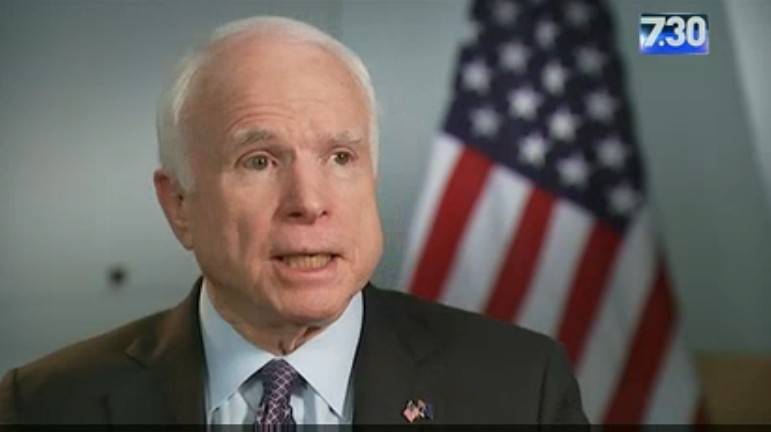 Clemens Vergin in the German newspaper «Die Welt» cites statements by the German Foreign Minister Sigmar Gabriel. Gabriel "lashes out sanctions against Russia," considering these measures "interference in the gas market in Europe."

In an interview with the Australian channel ABC, Senator John McCain made a very sharp statement, saying that Vladimir Putin "is more dangerous" than terrorist fighters. Then the US Senate adopted a legislative package that provides for the expansion of sanctions against Iran and Russia. 98 from 100 senators voted “for” and only two - “against”, reminds a German journalist.

The senators' almost unanimous decision is a clear vote of no confidence in Trump. Lawmakers are trying to prevent some “Russophile” actions of the president by sanctions - at least the likely cancellation of sanctions. When adopting a new bill, the president will not be able to do this. This is how senators want to limit Mr. Trump’s «external actions’ against Russia.

Trump's team tried to prevent the passage of the bill in the Senate in advance. Foreign Minister Rex Tillerson has been intensively campaigning for two days against new sanctions. Tillerson asked parliamentarians to refrain from putting pressure on the president and to show “flexibility” in the approach to sanctions, but he failed. The bill “reasserts” the existing sanctions against Russia (imposed “because of the annexation of the Crimea and supporting the war in eastern Ukraine”) and imposes other sanctions based on the “manipulation of Russia by US elections and the interference of Moscow in the affairs of Syria”. The new sanctions could seriously affect the cooperation of foreign companies with the Russian energy sector.

The overwhelming majority in the Senate, who advocated the adoption of a law on sanctions, was explained by the German author for two reasons: the attempt of the republican hawks to force the president to return to the classical tough stance of the Conservatives towards Moscow, and also the revenge of the Democrats for the defeat of Hillary Clinton. These Democrats also became hawks like Republicans. Now both political camps are against Trump.

The driving force behind the bill was Senator John McCain, one of the constant critics of Mr. Trump’s foreign policy. “The time has come to respond to the Russian attacks on American democracy,” he said.

In addition, the senators understand: Trump will get worried, because a "united front" of Republicans and Democrats has formed against the White House. Lawmakers do not want the US to rule a capricious type like Trump, who does not care about the complex mechanism of international politics.

“The US Senate has opened our eyes to the fact that sanctions are aimed at driving the Russians out of the European gas market. The Americans themselves want to sell gas in Europe, they want to create jobs in the United States and get rid of an undesirable competitor. " This is what the Americans want, and not at all the political “punishment” of the Russians for the election campaign in the USA.

Herr Gabriel further remarked that one cannot treat such a partner (USA) as a friend. Such a policy is no longer characterized by the concept “America is number one,” but is characterized differently: “Only America.”

“Europe has liberalized the energy market,” Gabriel recalled. “Who, where and how supplies energy resources there is organized on the basis of free decisions of market participants.” “We, the Europeans, decide the issue of providing energy, the US president does not solve it,” said Gabriel in an interview with Die Welt. 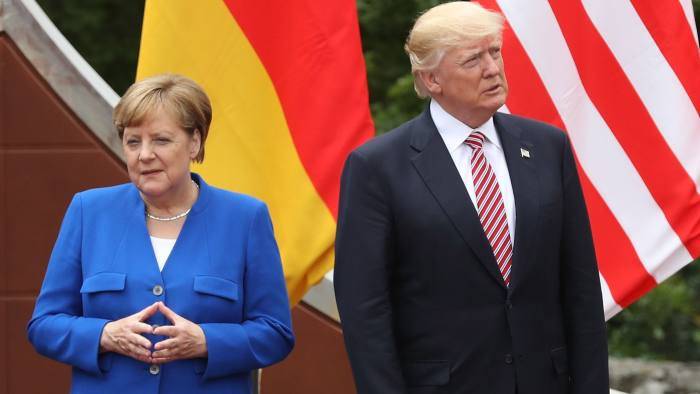 The latest signs of growing political differences between Berlin and Washington were statements by Angela Merkel, which condemned the infringement of Germany’s interests: she did not like American plans to toughen sanctions against Russia.

The German chancellor, a politician usually extremely cautious, has now taken an unusual stance, fully agreeing with the strong criticism of Foreign Minister Sigmar Gabriel regarding the US “proposals” for sanctions. A spokesperson told the press that the Chancellor has a "similar level of concern."

Merkel's statement shows her willingness to publicly criticize the United States. Sanctions against Russia have become the second reason for criticism. The first discontent was due to Mr. Trump's frank speeches on issues relating to defense, trade and international cooperation. “She [Merkel] seems increasingly inclined to risk provoking Mr. Trump and his political allies, although she insists that she is still strongly committed to the transatlantic alliance, because she believes that the vital interests of Germany and Europe are at stake,” writes journalist.

“The bipartisan senate approach to toughening sanctions against Russia” is linked “with the Kremlin’s aggression in Ukraine, the deployment of nuclear weapons and alleged interference in the US presidential election,” the correspondent recalls. However, most of the bill codifies the existing sanctions in order to complicate the procedure for their mitigation. This decision of the senators is connected with their fears: no matter how Trump comes out on the direct “pro-Moscow line”. The bill also includes new measures aimed at the Nord Stream - 2 pipeline, in which German and Austrian companies are investing. In addition to Russian economic entities, the sanctions will also include foreign industrial groups that support Russian “gas export pipelines” (as defined by the senators).

Berlin openly condemned the plan for such intervention in the European energy sector. Germany is outraged by the fact that the bill expands the justification of the sanctions, which has already gone “beyond the aggression of Russia in Ukraine”, the initial basis of the US and EU sanctions packages, “carefully designed by Ms. Merkel and Mr. Trump’s predecessor, Barack Obama”, states .

German officials are also outraged by the fact that the bill explicitly calls on the US administration to “prioritize” US energy exports, “create jobs in America” and “strengthen” US foreign policy. In Berlin, they say that this contradicts the current regime of joint sanctions, because the United States puts its economic interests above the interests of its EU allies, and this is manifested even in European energy!

And the cherry on the cake: on the site Ministry of Foreign Affairs of Germany published a statement condemning these US sanctions. The text is signed by the same Gabriel and Christian Kern, Prime Minister of Austria.

Both politicians cannot agree with the “threat of illegal extraterritorial sanctions against European companies that are involved in the development of Europe’s energy supply.” Kern and Gabriel indignantly reject the attempts of Washington, which in its bill insists on the priority of supplies of American liquefied gas and the expulsion of Russian natural gas from the European market. The goal of the bill is that German and Austrian see “the provision of the US oil and gas industry with jobs.”

Kern and Gabriel answer to such attempts: “Sanctions as a political tool should not be tied to economic interests. The US threats to companies in Germany, Austria and other European countries on the market in the form of punishment for participating with Russia in natural gas projects such as Nord Stream II, or their financing, brings a completely new negative quality to European-American relations. ” We are talking about the competitiveness of the energy-intensive industry in Germany and Austria and thousands of jobs. Therefore, both politicians "strongly" support the efforts of the US Department of State against the new bill.

“Europe’s energy supply is a matter of Europe, not the United States of America!”

The cold war between the US and Europe is expressed in the results of opinion polls. The same Germans treat the USA much worse than a couple of years ago. And the authority of Angela Merkel, the objecting America, has suddenly grown in recent days.

According to the latest Infratest Dimap survey (6 and 7 in June 2017), which RBCFor the first time since the beginning of the migration crisis in the EU, Frau Merkel became the most popular politician in Germany: 64% of respondents support her policy. At the same time, the confidence of German citizens in the United States as a foreign policy partner fell: since April, the drop has amounted to 8 percentage points. The politics of Washington (like Moscow, by the way) are distrustful for 74% Germans.

The vaunted unity of the West has split. And this is no longer hidden on both sides of the ocean. We would not be surprised if Mr. McCain recently accused Putin of discrepancies in Western interests.