18 2017 June
16
Kyiv City Council voted to rename General Vatutin Avenue. From now on, it will be Roman Shukhevych Avenue. Instead of the commander of 1-th Ukrainian Front, who liberated Kiev from the Nazis, the current Kiev salutes the commander of the so-called rebel army. 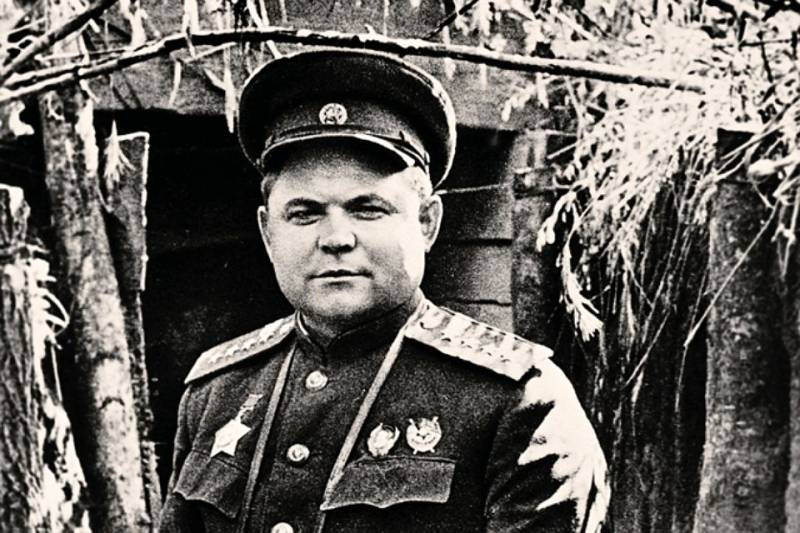 In 1945, it was hardly possible to imagine that the time would come when the people of Kiev would want to review the results of the Great Patriotic War, turn it upside down history The twentieth century and the winners will be for them "persona non grata", and war criminals - heroes. Not everyone in Ukraine agrees with the ideology of “crooked mirrors”. However, today the ball is ruled by those for whom Nikolai Fedorovich Vatutin is not a hero, the Red Army is not a liberator, but our common Soviet past is only an object of hatred ...

What was the difference between Vatutin and other generals of the Red Army of his generation? According to the roots, according to the initial biography, everything is standard. He is from the middle peasants, from the rural majority. The future front commander was born into a large peasant family in the village of Chepukhina (now Vatutino!) In the Belgorod Region. The main battles of the Civil War did without him. Vatutin was drafted into the Red Army in the spring of 1920, an eighteen-year-old. He served in Lugansk and Kharkov, participated in hostilities against the Makhnovists. Joined the party, continued his education at the Poltava Infantry School. The army was to his liking, he decided to become a professional military commander, and by 1937 he graduated, as expected, two academies. He distinguished himself in 1939, when an operation was being developed to occupy Western Ukraine. That operation and modern Ukraine owes its western frontiers. In the dossier of the general, the following wording appeared: "During the liberation of the half-brothers, Ukrainians in Western Ukraine, under the yoke of the Polish gentry, as chief of staff of the district, he showed the ability, endurance and ability to lead a major operation." 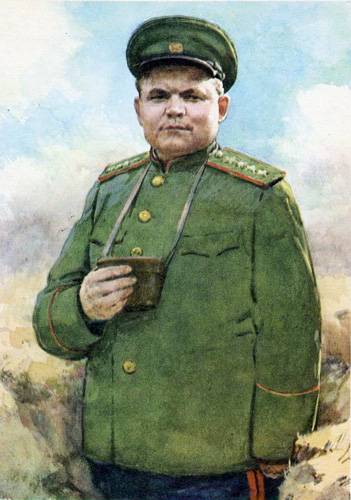 In February, 1941 General Vatutin was appointed first deputy chief of the General Staff, Georgy Zhukov. Further - as in the song:

Where are these guys are rough?

With whom in the forty first year

We froze on the ice.

With whom in the heat and cold

He became chief of staff of the North-Western Front, who restrained the Nazis in Pskov and Novgorod. These were the months of the bitterest lessons of the war. Vatutin has a reputation as a competent and efficient staff general. But in July, 1942 was unexpectedly appointed commander of the Voronezh, and then the South-Western Front, and he did not let him down. The South-Western Front played an important role in the Stalingrad operation. The commander capable of commanding the front was discerned in Vatutin by Alexander Vasilevsky.

Vatutin's talent as a commander was most clearly manifested in the development of the Kursk strategic defensive operation. He developed a multi-level plan of deliberate defense - to bleed the enemy in advance prepared defensive lines and at the same time prepare the conditions for the subsequent counter-offensive against Kharkov. This large-scale and risky task was solved. As a result, the exhausted adversary could not withstand the counterstroke of the Soviet armies. Since then, the strategic initiative in the war finally passed into the hands of the Red Army. And Vatutin is undoubtedly involved in this glorious turning point.

It so happened that the troops under the command of Vatutin on various fronts defeated the German armies several times, led by Field Marshal Erich Manstein. In a tense confrontation, Army Group South was not able to hold back the 1-th Ukrainian Front of the Red Army. Early in the morning of November 6, 1943, General Vatutin entered the liberated Kiev. The city lay in ruins, but Vatutin had no doubt: "We will rebuild!". In Kiev, the enemy no longer hosted. But after that autumn, Vatutin's troops had to lose and retreat. Although the three offensive operations of Zhytomyr-Berdichev, Rivne-Lutsk and the brilliant Korsun-Shevchenkovskaya (it was then that Manstein managed to arrange Cannes!) Created Vatutin's reputation as a “general from victory”. His role in the liberation of Soviet Ukraine is difficult to overestimate. 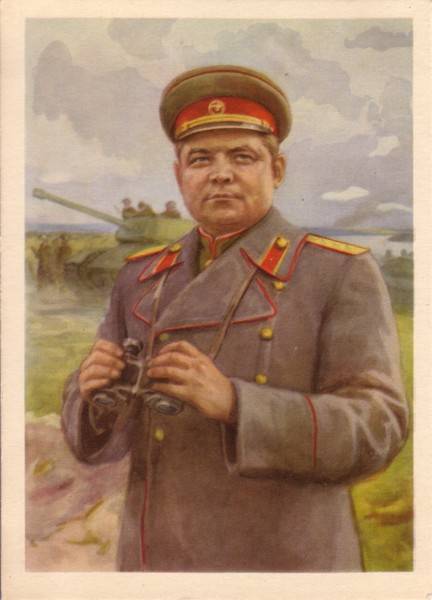 He received a mortal wound in Kasyanov's Day, 29 of February, 1944 of the second leap ... Smershevists overlooked the crazy attack of the sabotage hundreds of UPA. At the entrance to the village of Milyatin, Ostrog district, Rivne region, a general’s machine was fired upon, Vatutin was seriously wounded in the leg. For enemies, it was an unexpected success, a happy coincidence of circumstances. In war, it happens.
The best surgeons led by the famous Nikolai Burdenko fought for the life of Vatutin. He kept saying: “Three weeks I'll miss the hospital bed, and then I will come to the front. On crutches, but I'll get it! ” Penicillin did not help (despite Nikita Khrushchev's recollections, it was used after all), and amputation of the leg did not help. 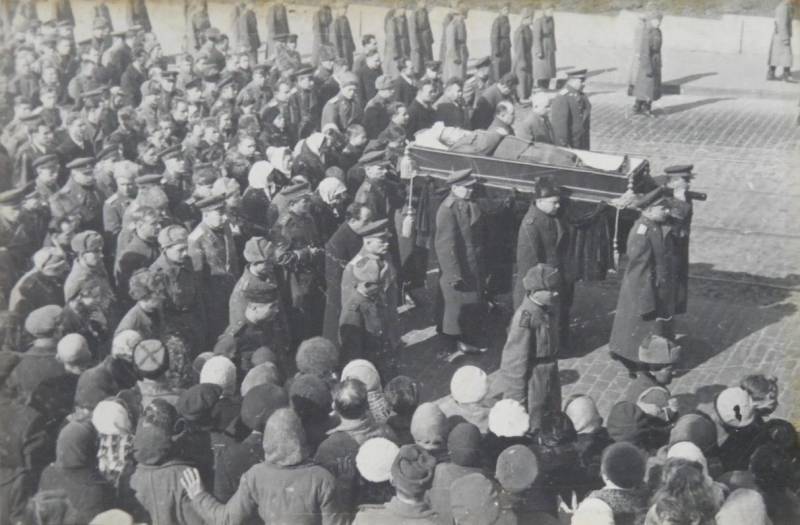 15 April 1944, Army General Vatutin, died in a Kiev hospital. He was buried in the Ukrainian capital, in the Mariinsky park. Both Kiev and Moscow gave the last honor to the commander of 24 with artillery volleys. Already in January, 1948-th over the grave of the general stood a magnificent monument by the sculptor Yevgeny Vuchetich. On the pedestal - the inscription in Ukrainian. The people of Vatutin were loved and revered, because he honestly shared the soldier's fate with the millions who died. In addition, two of his brothers, Athanasius and Fyodor, were killed at the front. Such an ordinary, heroic and woeful fate of the peasant family. But they did not just die, but died for the Victory. 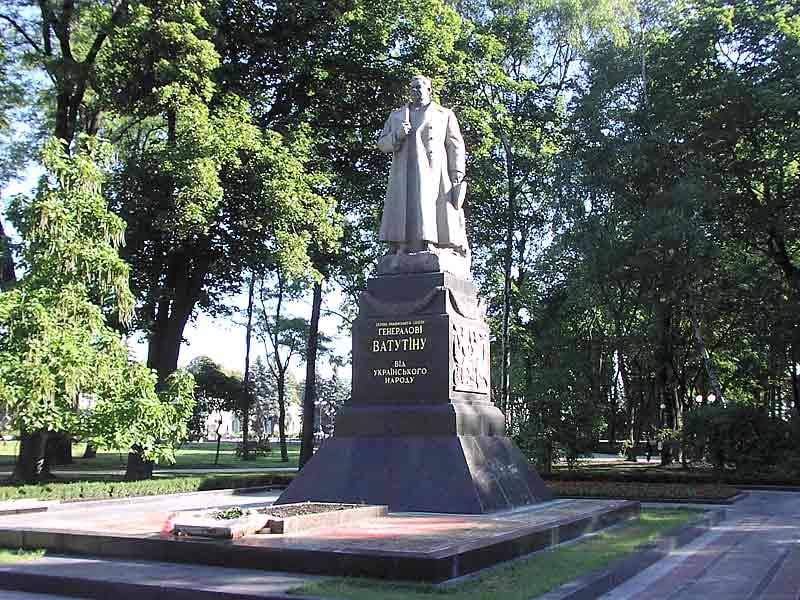 Even in his youth, he earned the respectful nickname of the Psychologist. And after the capture of Kiev, both enemies and comrades called him the Grand Master. Thoughtful, inclined to the analytical work of the general otherwise and can not be called. This inquisitive nugget has become a true army thinker. Khrushchev in his memoirs recalled such a feature of Vatutin: “Almost non-drinker!”. And also - not giving himself indulgences, not knowing fatigue and mood swings.

Vasilevsky recalled his pupil in the following way: “General Vatutin deservedly won himself a general recognition and nation-wide love. His name - the name of an outstanding master of driving troops, a fiery patriot of the Fatherland, a communist, a favorite of soldiers - is forever connected with our victories at Stalingrad and Kursk, when crossing the Dnieper and liberating Kiev, in Right-Bank Ukraine. ”

Vatutin's legacy is the heritage of military academies and history textbooks. And preserving the memory of a hero is a matter of honor for posterity.