16 2017 June
23
Australia officially joined the "AEGIS Club". On the basis of the Osborne Australian Navy held a solemn ceremony of adopting the destroyer Hobart - the first of three ships of the same type, reports "Warspot" with a link to the portal navaltoday.com

Hobart will play a crucial role for the defense, providing new opportunities for the Australian Navy. Using a combination of American and Australian technology, this ship will allow us to work more effectively with our allies.
- said Minister of Defense Industry of Australia Christopher Pyne. 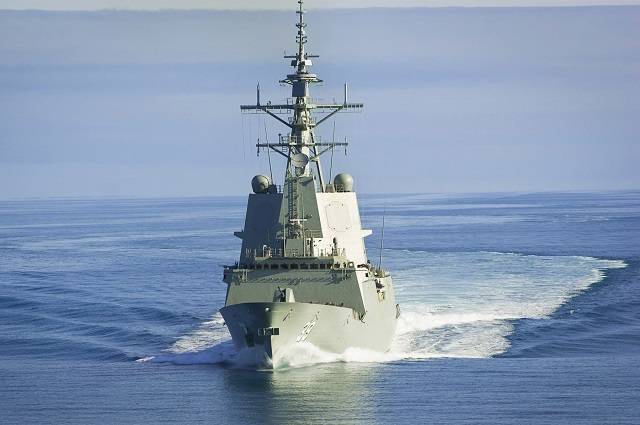 Hobart-type destroyers are built according to the SEA 4000 program, according to which the Australian Navy should receive three modern multipurpose warships. The length of the Hobart-type destroyer is 147 m, displacement - 6150 t. Each of the ships will be equipped with the AEGIS system with the Lockheed Martin AN / SPY-1D (V) multifunctional radar and 48-charging universal vertical launcher Mk 41, in which anti-aircraft missiles are to be placed Standard SM-2 and ESSM (in perspective - Standard SM-6 and Tomahawk).

AEGIS is an American naval multifunctional combat information and control system, which is an integrated network of naval means of control, control and destruction. The system allows you to receive and process information from sensors of other ships and aviationBy transmitting the coordinates of targets to their launchers.

The destroyer HMAS Hobart (D39) "stayed" on the stocks for more than two years, but by September last year, Techport Australia still successfully completed the ship, and the AWD Alliance consortium prepared it for transfer to the Australian Navy. The first access to the sea took place last September 13 from the Techport Australia shipyard in Adelaide (South Australia).

Australian destroyers are based on frigates of the type Álvaro de Bazán, designed by Navantia for the Spanish Navy. In the period from 1999 to 2012, the year five such frigates were built, intended for operations as part of a search and attack group led by an aircraft carrier. The second destroyer of the Hobart type was launched in December last year and is now undergoing a series of tests.