February 28 2012
39
Today, in the era of globalization, the state of any modern economy is determined by its security with energy resources. The existing dependence will continue in the foreseeable future, even despite an intensive search for alternative sources of energy. The Arctic region, due to its huge hydrocarbon reserves and convenient air and sea routes, is attracting the attention of many countries and transnational corporations. In the Arctic, national and group interests clash, disputes over the belonging of the Arctic zones are intensifying, and military activity is increasing. Against this background, Russia's actions to strengthen its military influence in the region look logical.


Importance of the Arctic for Russia

The Arctic is part of the globe north of the Arctic Circle. Its total area is 21 million square kilometers. The Arctic includes the Arctic Ocean and marginal seas, islands located here and the adjacent parts of the land of Europe, Asia and North America. At present, Russia, Canada, USA, Norway and Denmark are considered to be subarctic states, Iceland, Sweden and Finland also claim this status. According to the UN Convention on the Law of the Sea of ​​1982, the Arctic states have the sovereign right to develop the subsoil within their exclusive economic zones (up to 200 miles wide) and the continental shelf (up to 350 miles wide), although these regions of the Arctic are not part of state territories.

From an international legal point of view, the Arctic is still a “no-man’s land”. The question of the division of the region at the international level has not yet been resolved. In 1909, Canada extended its jurisdiction to the Arctic sector, concluded between the meridians, starting at the points of exit of its land boundary to the Arctic Ocean and converging at the North Pole. At that time, only Russia supported it, adopting a similar law in 1916. The three other Arctic states did not legislate their possessions in the Arctic in any way, and no one expressed any objections from Russia or Canada. In fact, the principle of sectoral division of the Arctic has become a universally recognized reality. 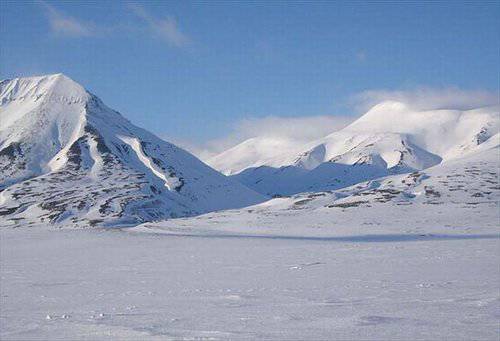 Recently, calls to revise this division have been heard more and more often, as large deposits of natural resources were discovered in the Arctic. Thus, according to estimates by the US Geological Survey, up to 20% of world hydrocarbon reserves are located in the Arctic Ocean: potential gas reserves are estimated at 47,3 trillion. m3, gas condensate in 44 billion barrels, oil in 90 billion barrels. The largest gas fields are located off the coast of Siberia and Alaska. In the future, the Arctic shelf may become a very important or even the main source of hydrocarbons. In addition to hydrocarbons, large deposits of ores were discovered here, including deposits of rare earth metals. In addition to this, the major biological resources of the planet are concentrated in the Arctic, here only fish are found in more than 150 species, with a number of them being the main ones in the global fisheries.

Russia owns almost half of the Arctic Ocean coast; in our Arctic sector, up to 80% of Russian oil reserves and 90% of gas and coal reserves are located. Only one Shtokman field, which is being developed by multinational companies together with Russia, has 3 800 billion m3 gas (for comparison, this is France’s gas consumption over 80 years). At present, Russia intends to submit to the United Nations an application for the expansion of its Arctic possessions for another 1,2 million km2 (three areas of Germany). In the American sector, oil reserves of the Chukchi Sea alone are estimated at 15 million barrels, and gas over 2 000 billion m 3. Large hydrocarbon reserves are located in the Canadian sector.

In addition to the resource, the Arctic has an important strategic military value. There are convenient positions for the placement of elements of strategic deterrence systems, for the launch of ballistic missiles and the location of missile defense systems. Thanks to global warming and the gradual reduction of ice, the naval forces are able to operate in this region for a considerable part of the year. 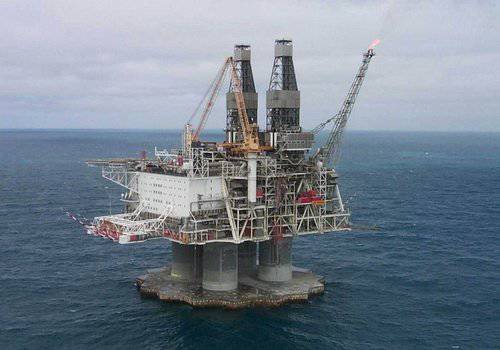 Another important value of the region is transport. The shortest air and sea routes between Eurasia and North America pass through the Arctic. By reducing the area of ​​ice in the Arctic, the length of routes between Europe and the Far East can be reduced by 40%. Now the use of these transport routes is hampered by the difficulties of navigation and flights in these latitudes, as well as the insufficiently developed transport infrastructure.

Arctic troops will be created by 2015 year

Last week, 21 February, the Commander-in-Chief of the Ground Forces, Colonel-General Alexander Postnikov announced that the first Arctic Rifle Brigade would be created by the 2015 year. "In accordance with the expected arrival of promising special equipment in 2015, a team that will meet all the requirements of the region must be created at this time," the commander in chief noted.

According to Alexander Postnikov, the technical base of the new Arctic brigades in the near future will be armored transporters, tractors MT-LBV. In the future, it will be a machine belonging to the family of combat and support equipment, based on a two-unit armored tracked unified platform. This vehicle will be able to move through deep snow and work at air temperatures around -50 degrees Celsius.

In order for the servicemen not to freeze, a special version of the winter uniform has been developed for them. According to Colonel Andrei Podoprigorin, head of the clothing department of the Department of Resource Support of the Ministry of Defense, a soldier in such a uniform can spend the night in a snowdrift without consequences for his body. This form is designed to provide military personnel who serve in regions with particularly cold climatic conditions. During her tests in the Arctic, Russian special forces soldiers slept safely 4 hours in a snowdrift without consequences for their body, Podoprigorin noted.

The training of officers for service in the Arctic brigades will be conducted on the basis of the Far Eastern Higher Military Command School. This was announced in the autumn of 2011 by the head of the school, Major General Vladimir Gryzlov. According to Gryzlov, the proposals of the Main Command of the Ground Forces on training in a platoon school for cadets on the specialization “The use of motorized rifle subunits in arctic conditions” are currently being worked out. Duration of the 4 training program of the year. 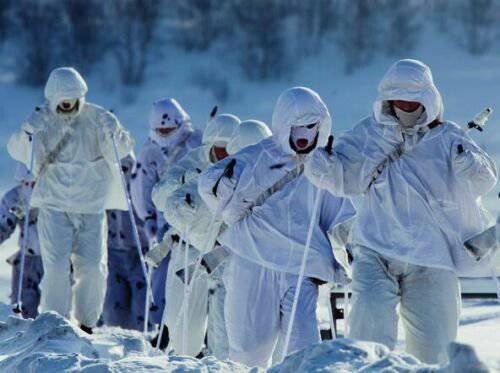 For the first time, the need to build up military capabilities on the Northern Sea Route, the Ministry of Defense announced in March 2011. A new compound for action in the Arctic was supposed to be formed on the basis of the 200 motorized rifle brigade, which is stationed in Pechenga. A few months later, Russian Defense Minister Anatoly Serdyukov said that not one, but two army brigades would be created in the Arctic to protect Russian interests in the Arctic. Possible places of their deployment, he called Murmansk and Arkhangelsk. The head of the defense department emphasized that when creating new units, the military would take into account the experience of the armed forces of Norway, Finland and Sweden.

The deployment of the new Arctic brigades of the Ministry of Defense will be held in the framework of the implementation of the Russian Federation Security Council’s Foundations of the State Policy of the Russian Federation in the Arctic for the period up to 2020 and the future. Within the framework of this document, in the coming years, groups of forces will be created in the northern regions of the country that will be able to ensure the military security of the Arctic region under various military-political situations.

Former Inspector General of the Ministry of Defense of Russia Admiral fleet Ivan Kapitanets believes that the Arctic should be seen as a potential theater of operations, so Russia just needs to increase its military presence in the region. According to him, the existing military-industrial complex will allow Russia to build up a powerful naval combat potential in the northern regions of the country, and the northern direction and the Northern Fleet should be strengthened by the fourth generation submarines of the 955 Borey project. 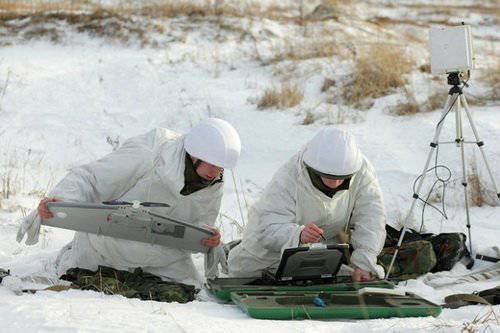 For action in the Arctic should be used special equipment. The Russian army already has samples of equipment that is successfully used in the conditions of the Far North. An example of such machines are MT-LBV and DT-30PM "Vityaz". MT-TWT is an all-terrain modification of an armored army tractor.

This modification has wider tracks and reduced pressure on the ground (at the level of 0,27 kg / cm2), which is almost equal to the pressure on the ground of an average person. The weight of the car in 11 tons is a very good indicator. MT-TWT is intended for use in arctic regions. At the request of the customer, the machine can be equipped with tracks of the main or snow-swamp-type execution, as well as an additional body heating system that uses heat from the engine cooling system. High throughput and decent speed - up to 60 km / h make the car indispensable in army units deployed in difficult climatic and environmental conditions.

The two-door all-metal heat and noise insulated cab for 2 seats is equipped with an additional seat and upper hatches designed for emergency escape of the tractor. The car has a good view from the driver when driving both day and night. At night, the driver can use 2 headlights and a headlight finder for confident movement. The closed heated body MT-LBV has a volume 7,3 m3 and is designed for 10 seats. The presence of an autonomous heater, which can work in combination with the use of heat, which is removed from the engine cooling system, creates comfortable conditions for the crew and passengers of the MT-TWT. The total capacity of the machine is 12 people (1 + 11). 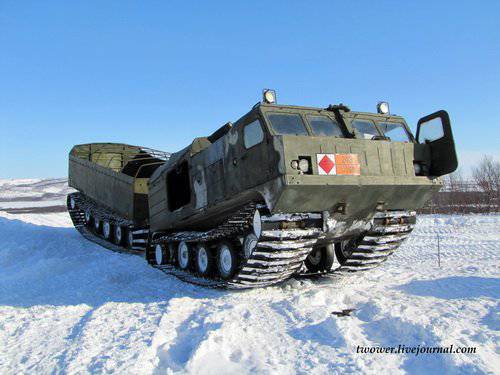 all-terrain vehicle "Vityaz" DT-30PM
An even more advanced vehicle for action in the Arctic is the tracked armored troop-carrier Vityaz DT-30PM, which is a military version of a civilian all-terrain vehicle with the code Omnipresent. Due to the versatility of the design, the Vityaz all-terrain vehicle can be successfully used as a chassis for the deployment of weapon systems, loading and unloading, earth-moving, lifting and other equipment for various purposes.

The high properties of the caterpillar propulsion, which are combined with overcoming water obstacles and confident maneuvering in any environmental conditions, make it possible to consider the Vityaz two-link all-terrain vehicles to be unique snow-bog-driven vehicles that are able to overcome long distances without engineering equipment and preliminary reconnaissance .

The main purpose of the all-terrain vehicle in the army is to transport weapons, military equipment and personnel of the armed forces in particularly difficult climatic conditions. With a mass of 30 tons, the all-terrain vehicle has the same capacity and can carry up to 19 people (crew member 2 + 17 paratroopers). The maximum vehicle speed on land is 45 km / h, afloat - 6 km / h. Cruising on the highway - 700 km.

The combination in one vehicle of such qualities as high maneuverability and throughput, maximum speed and power reserve, buoyancy and carrying capacity, the ability to overcome all sorts of obstacles and water obstacles with full load and versatility make DT-30М “Vityaz” an unparalleled vehicle. the world.

Ctrl Enter
Noticed oshЫbku Highlight text and press. Ctrl + Enter
We are
To the most extremeRussian throw to the North
Military Reviewin Yandex News
Military Reviewin Google News
39 comments
Information
Dear reader, to leave comments on the publication, you must to register.