14 2017 June
25
There are reports from Syria that Syrian government forces have freed up a substantial stretch of highway connecting Tadmor (Palmyra) with Deir ez-Zor. Previously, this entire road was under the complete control of ISIS militants (* terrorist group banned in the Russian Federation). 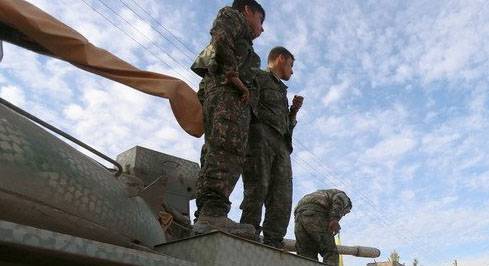 The Syrian Ministry of Defense announces the release of the so-called Arax Triangle in the eastern part of the SAR. The army on the eve entered Arak and broke down the resistance of the igil groups. Some time later, the neighborhood of the city, which is of strategic importance on an important highway, was cleared of terrorists. At ISIS (*) Arak was a kind of logistics point, from where armed militants were sent as reinforcements to where the Syrian army launched an offensive in the provinces of Homs and Deir ez-Zor. In Arak, a mine clearance operation is underway.

The liberation of the Arak triangle took place thanks to the skillful actions of the 5th corps and 11th tank SAA divisions with the active support of the Russian military aviation.

Today, the Syrian army strikes at the last of the remaining positions of ISIS (*) in the area of ​​the Mustadir hill. The main task of the CAA is to liberate this area from ISIS (*) of the city of Sukhna, which has been occupied for a long time.